Television Review: LOVE THAT BOB: "Bob Gets Schultzy into Pictures" (1957) 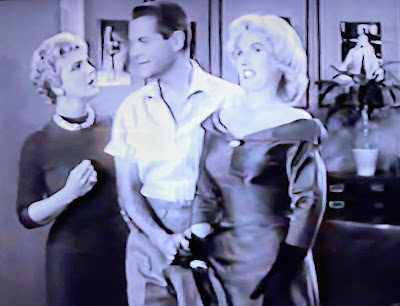 Introduction to the LOVE THAT BOB a.k.a. THE BOB CUMMINGS SHOW episode guide is at this link.

Schultzy has been sending letters back home (Pennsylvania) to high school frenemy Marsha Singer, bragging about her life in Hollywood "making pictures".  The ruse seems blown to bits when Marsha arrives for a visit, and Bob fully intends to pop the bubble until he gets a whiff of Singer's snootiness.  Determined to take Schultzy's tormentor down a peg or two, our loverboy begins transforming his Girl Friday into competition for Marilyn and Jayne. 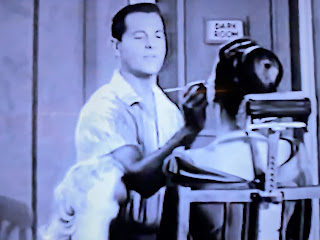 The silver tongued orator rhapsodizes about his unrequited love for Flaming Charmaine(!) and her steamy celluloid scenes deemed too earthy for France and Italy.  With the help of three cooperative models the subterfuge works on Singer--and on Schultzy's sailor date Frank Crenshaw, who gets the acting bug and ends up cast in Alan Ladd's upcoming Navy flick THE DEEP SIX when he believes Bob's bull.  That just might come in handy, since Ladd happens to be Singer's favorite actor. 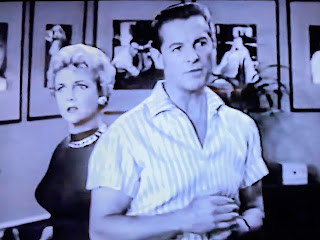 "If Charmaine is such a glamourous star, how come I haven't seen ONE of her pictures?"

Bob's successful makeover on Pamela Livingston in The Sheik might well be surpassed by his work in Bob Gets Schultzy Into Pictures.  Ostensibly helping her to get his work done, Bob puts his full force into turning Singer green and succeeds despite the expected hiccups.  True, it takes the special guest appearance at the end to really sell it, but don't sell Bob short.  It was his PSYOP on Frank that ultimately brought the seaman to Mr. Ladd's orbit---and Ladd into Bob's. 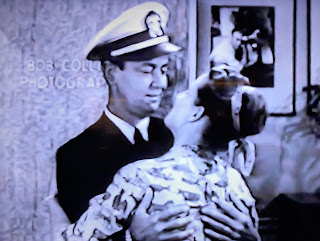 "Who knows what motivating forces draw me irresistibly to her?"

Yes, Bob's carnality takes a backseat--for once, he puts his devilish charm to altruistic use.  The models are in on the scheme and Collins persuades them all to let Schultzy shine.  Lisa Davis played three different characters during the show's run, making her debut as Giselle here.  Perhaps Lisa Gaye was unavailable, since Giselle seems to be a carbon copy of Collette Du Bois and even mentions Collette as her friend. Frequent MAVERICK leading lady Merry Anders makes a return after Bob Gets Out-Uncled, modeling this time after being a tennis partner in that third season finale. 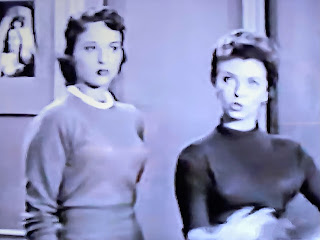 Rounding out our trio is twenty year old UCLA cheerleader Phyllis McMeen (at left in the pic), who also continues the LOVE THAT BOB tradition of casting pageant contestants: she was 1955's Miss Woodland Hills.  McMeen was quite active during her UCLA years, winning on Strike It Rich in 1956 and scoring this acting role as part of the publicity.  After modeling for Halo shampoo print ads and being named homecoming queen for the Bruins as well, McMeen opted for marriage over continuing a career in 1959.  She's predictably given the fewest lines of the models but doesn't distract from the fun. 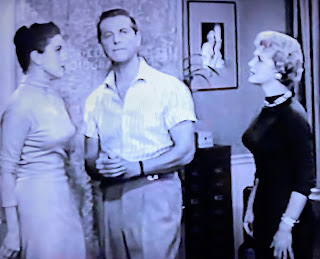 Forever immortalized as Caroline Appleby on I LOVE LUCY, Singleton pretty much plays the same type of nemesis here for Charmaine.  Longtime BOB fans won't be surprised by the titular hero's lack of interest in romancing her--snobbery has always turned him off.  In one of her final TV roles, Elizabeth Slifer is the woman Bob thinks has the way to Alan Ladd's heart.  The prolific character actress and Dallas native passed away a year later at 62. 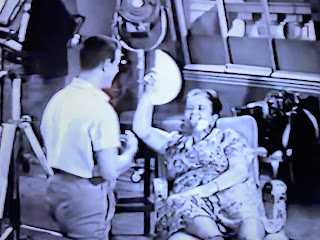 In the LOVE THAT BOB universe, Bob's stinkerish behavior often gets rewarded (i.e. The Beautiful Psychologist, Bob Gives S.R.O. Performance). With seemingly equal frequency, good deeds do not go unpunished (Bob Saves Harvey).  It isn't 100%, but common enough to qualify as subversive for 1950's TV.  That is again the case here, with Collins' date for the evening giving him much more than he bargained for.  Meanwhile, Schultzy's payback for her fibs?  An enhanced stature to her Keystone state homegirls, and some smooching with the star of SHANE.  The karma in this setting is subtly but noticeably worlds away from BILKO.  Tell me again why this show wasn't really ahead of its time? 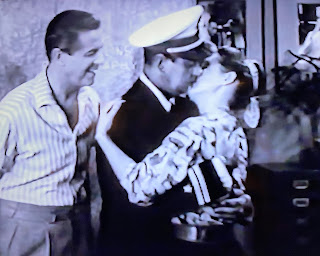 Kind of curious that Ladd's promotion of THE DEEP SIX didn't air closer to that film's release date (January 15, 1958--three months later), but like many shows, BOB liked to bring out the big guns early in the season (remember, Zsa Zsa Gabor opened the show's third).  Ladd's star power was fading a little from his heyday, but he's flattered handsomely by the script--somewhat to Bob's chagrin, he's everyone's favorite actor, even Chuck's.  Returning the favor, his is one of the best meta celebrity appearances on the show, besting those by Peter Lawford and even Cummings himself (more on those later as we continue the guide). 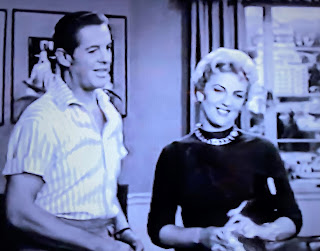 "When there's caviar around, who wants navy beans?"

In the end, this is Ann B. Davis' episode.  Hilariously fickle and ditzy in costume, with pitch perfect reactions to the star, this is the installment that finally put her in the winner's circle come Emmy time in April 1958, and deservedly so.  Even though the writing slipped during the final season, Davis repeated at the Emmys. 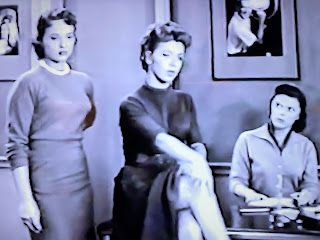 Nothing to block this time, believe it or not.  Schultzy is getting all the action--and from our men in uniform to boot!

As noted above, he was letting his heart of gold show this time and putting his hard working assistant ahead of himself.  To the point that he DID end up with a date, but I doubt if he put much effort into getting on the basepaths.  Watch the episode below to see what I mean. 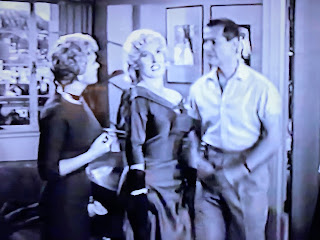 Showing we don't need to focus on Bob's late night exploits to make a highly entertaining segment, Bob Gets Schultzy into Pictures delivers the goods long before the much-hyped appearance by Ladd, who puts a perfect capper on this fun, memorable outing.  Well written, directed and acted--Davis might have been the only one awarded hardware but she wasn't the only one deserving it from this show.  (***1/2 out of four)

***Want to see it for yourself?  YouTube is your friend:

Just curious ...
Your clip cuts off the end credits just before Bill Baldwin reads off the cast list.
Does he mention Alan Ladd, or is there a gag involved?

By the way, Happy New Year!

Hi Mike! Thanks for reading as always.

Happy New Year to you too

I usually am able to obtain these with the closing voice overs but unfortunately not this time. Usually though Baldwin will say something like Alan Ladd played himself.