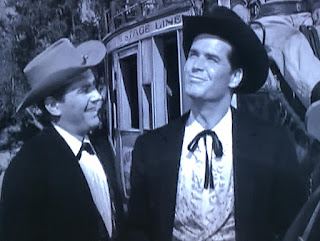 
Bret and Bart take the titular stagecoach to Snowflake to claim their inheritance from Uncle Micah Maverick.  The journey is interrupted by highwayman Rumsey Plumb, who is more saddened by the brothers' disinterest in continuing the business than in the empty lockbox.  While let down, Rumsey isn't as disappointed as the Mavericks soon will be. 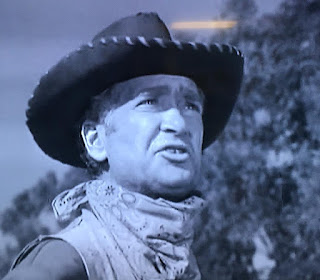 Once the brothers arrive at attorney Atherton Flaygur's office, they learn that the Maverick Line is all they've received in the will--"to install regards for commerce and to repel traits of idleness and shiftlessness" in accordance with Micah's wishes.  Bret and Bart rush for the door, only to be stopped by Polly Goodin, heir to the land that Micah purchased right of way from.  She'd like it back, so there's potential for a substantial profit in the rickety old stage line after all.  Enough of one to put the lives of both Mavericks in danger when Flaygur learns that a "tragic misfortune" befalling them both would revert ownership of the Line to the will's executor. 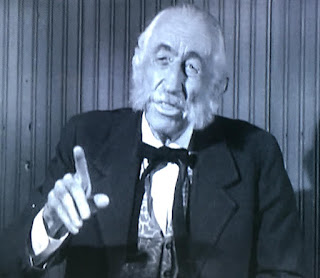 The Maverick Line posthumously introduces us to the boys' Uncle Micah.  After all we've learned about Bret, Bart, Beau, Pappy and Uncle Bentley, Micah is the Bizarro Maverick: strongly disapproving of gambling and a wayward existence while championing hard work.  Forget Beau and his (accidental) Civil War medal--Micah was the true white sheep of the family.  Little wonder that Pappy Beauregard and brother Bentley have no bequeathment from him--obviously, Micah thought only the young 'uns were salvageable. 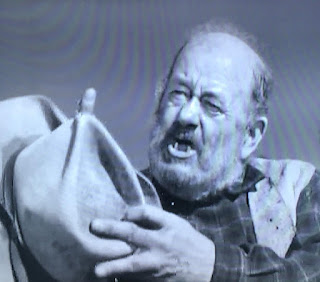 "Any man who needs to make a will isn't spending his money properly." -- Pappy (One of Our Trains is Missing)

For all of his will's verbiage extolling of the value of hard work, the evidence we're shown calls that virtue into question, along with Uncle Micah's business acumen.  Parsimonious Micah's decrepit stage has two horses (both looking ready for the glue factory) instead of the usual four, he paid meager wages that attracted less than committed employees like Dutch, and he was too miserly to even hire a shotgun to back up his driver.  The last of these "qualities" enables Rumsey Plumb to make a consistent living--even with a lockbox that's often empty.  Giving him the benefit of a doubt, Micah appears to have died without much to show for all that work ethic, so he might have been cheap out of necessity.  Suffice to say that reading between the (Maverick) lines fully supports Pappy's philosophy of life over his penny-pinching brother's. 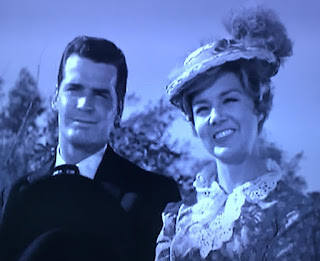 Intended as the fourth season's premiere but delayed until November due to James Garner's departure, The Maverick Line would have been the weakest opener to date by a considerable margin.  While the Mavericks have a spotty history at best in business deals away from the poker tables, they always seem several steps further behind Goodin and Flaygur than they should be.  You'd think that all the interest in their right-of-way (including a land rush filled with nagging questions) would have told at least one of the brothers to hold instead of fold. 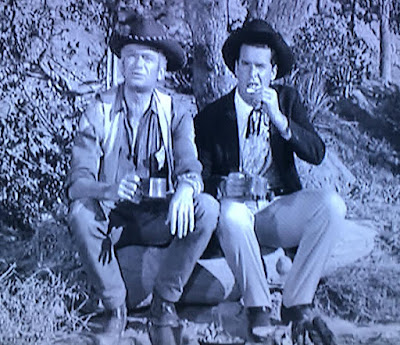 The contrivances to get to the denouement are also much more noticeable than before.  A really glaring example is Plumb's second lockbox procurement: after it has been established that he always has the driver hold it while he shoots the lock off, Rumsey takes the box after accosting Bret and Polly en route and sends them on their way.  Why?  So he can conveniently set off the bomb inside it seconds later without killing the show's stars.  At least, that's the only explanation that fits--certainly no logical progression based on the story up to that point.  (If he'd known that it would be Garner's finale when The Maverick Line was filmed in March 1960, Jack Warner might have signed off on that detonation in Bret's hands---but I digress.) 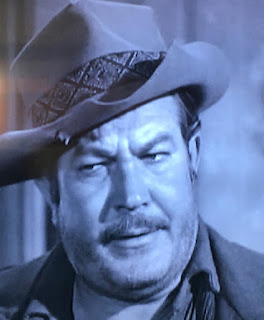 "Just clearing my conscience.  Hard to explain to a man in your kind of work." --Shotgun Sparks, to probate lawyer Atherton Flaygur.

Root and Bishop do have several funny lines in the script, saving their tastiest for Buddy Ebsen's Rumsey Plumb, who is the best written character by a wide margin.  Self-sufficient, hard working, but thoroughly professional, he's a hoot in his game attempts to preserve his steadiest source of income.  Plumb draws a distinct line between Sparks and himself, generously provides his horse at a key moment without hesitation, and has the Mavericks "over" for quail dinner when all is said and done.  Chubby Johnson (Pappy) grouses as yet another comical stagecoach driver, and Will Wright (Rope of Cards) also returns to the series, channeling his best Charles Lane.  Atypically strange and ultimately unsatisfyingly so, The Maverick Line is more evidence of a show in decline than a stage setter.  It is likely overrated due to its accidental status as Garner's farewell. 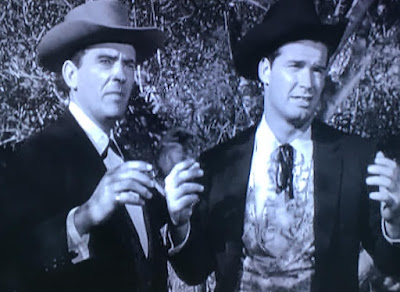 No table action at all for Bret or Bart.  I said it was atypical.

Nope, none at all, and you'd think he'd have had something to say about dear estranged brother Micah.  Before I checked the credits, I occasionally wondered if the writers had ever seen MAVERICK before.  But they had..... 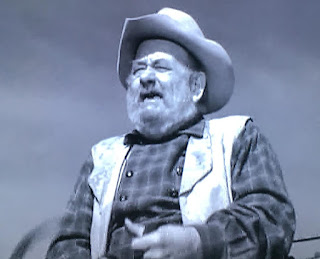 ...among the writers brought aboard by Coles Trapnell for the third season, Wells Root and Ron Bishop partnered on two installments previously.  They typically worked as a team, but each had one solo outing for the fourth season.  It's very MAVERICK-like to have highwaymen, professional gamblers and even the fixer Sparks having far more honor than the bankers and financiers we meet.  Not so much to have both brothers so outwitted simultaneously, or for the story have such transparent contrivances.  The Maverick Line has a number of witty lines and Goodwins presents them nicely, but the decline in the writing without the original contributors from the first two seasons is palpable by this time.  Some really funny moments from Ebsen, but ultimately a disappointing swan song for James Garner.  For my money, the weakest Bret-Bart teaming.  (** out of four) 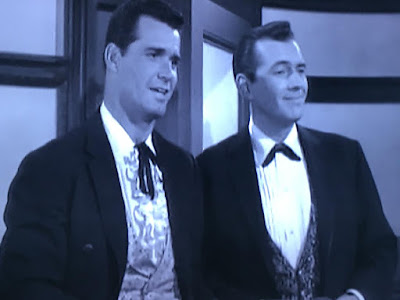