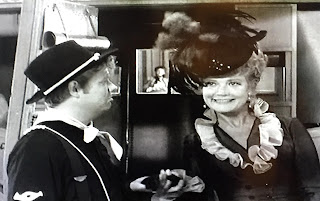 
Mushy musings from Dobbs' mother are mistaken for a love letter from legendary soprano Laura Lee by a snooping Sergeant O'Rourke, who sees the wrong side of an attached newspaper clipping.  After erroneously "confirming" that Ms. Lee is on her way to Fort Courage, O'Rourke and Agarn scheme to profit off the "final, farewell" show by the Songbird of the South. 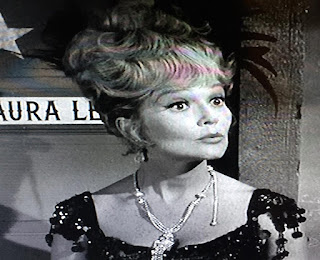 Naturally, said performance will be held at the saloon, with all proceeds going to the (newly-formed) "Enlisted Men's Fund".  Colonel Griswald's subsequent visit creates phenomenal word of mouth for the event: Generals Sheridan, Sherman and Smith all accept the Colonel's invitation to attend.  Then Parmenter learns the truth from the bashful Bugler: "I don't know her from Adam!" 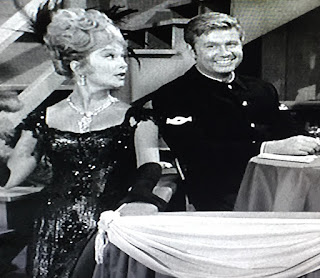 Variety show specialist Larry Markes (writer of over thirty DEAN MARTIN CELEBRITY ROASTS) and veteran sitcommer Michael Morris (THE FLYING NUN, BEWITCHED) co-wrote She's Only a Build in a Girdled Cage.  It would be the lone F TROOP segment for both--and in a most noticeable anamoly, the only episode to feature none of the Hekawis.  Predictably, Wild Eagle and Crazy Cat are missed. 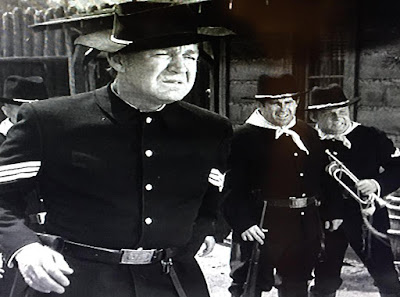 With an acceptable idea for both the central misunderstanding and the latest moneymaking scheme for O'Rourke Enterprises, Girdled Cage starts with some intrigue.  Unfortunately the fatal flaw was a failure by the debuting Markes/Morris team to write the Sergeant effectively and consistently with the standards established by Jacobs, James, Julian and Barnett. 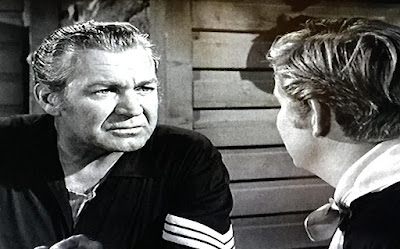 The most traditional of sharp operators, O'Rourke usually verifies diligently before trusting.  His indiscriminate manner in confirming the seemingly unbelievable romantic pairing of Laura Lee and Hannibal Dobbs is a flight of fancy that seems much more likely to befall Agarn.  The Sarge's low key invasion of his V.P.'s territory creates a domino effect, with the good Corporal reduced to the role of lead cheerleader while awaiting the stage's arrival. 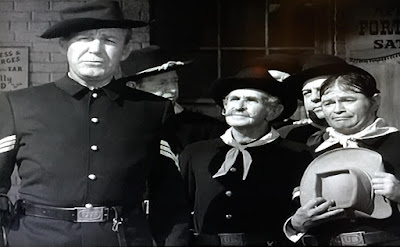 "
So we have a fanciful O'Rourke, AWOL Hekawis, and Agarn relegated to the background.  Everything is off-kilter, and not in a good way.  We do get some insight into Dobbs' New Orleans background, but if you're waiting to hear how this Louisiana Mama's Boy ended up spending the Civil War years at Fort Courage (or how his middle name came to be Shirley) you'll still be waiting when Ms. Lee exits for her next "final, farewell" performance. 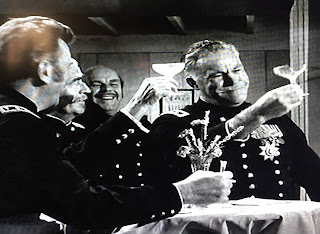 She's Only a Build in a Girdled Cage isn't unconventional enough to give Private Hogan lines, as Jimmie Horan is again mute and uncredited.  But we do have a predictable but still inspired spin on the fall of the observation tower and yet another new Inspector General--Colonel Griswald, whose cordial invitations almost land Parmenter in hot water. 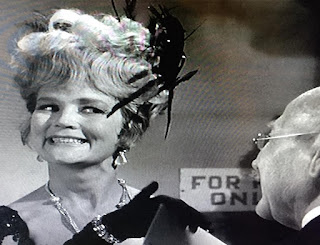 The biggest saving grace is Ms. Laura Lee herself.   Patrice Wymore's sultry soprano doesn't arrive until the second Act is well underway but proves to be worth the wait.  The self-described ham performs from the masses from stagecoach to stage, planting one on Dobbs in front of his new adoring fans and getting some goo-goo eyes from officers and gentlemen, highlighted by some pricelessly animated mugging by Bob Steele's Trooper Duffy. 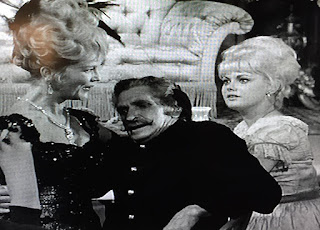 Wymore's career was winding down at this time, but she did return in Season 2 for a meatier role in the far superior Is This Fort Really Necessary?  That episode was not only F TROOP's swan song, but Wymore's as well: she retired to Jamaica in 1967, where third husband Errol Flynn had left her a 2,000-acre coconut plantation.  Wymore died in 2014. 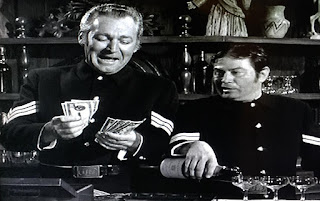 The newly-established Enlisted Men's Fund is breaking even by about 300-400 percent according to O'Rourke, but things go askew for our enterprisers as Captain Parmenter takes the money the Sarge is counting---one more indication that our freshman F TROOP scripters simply didn't have a good grip on these characters: 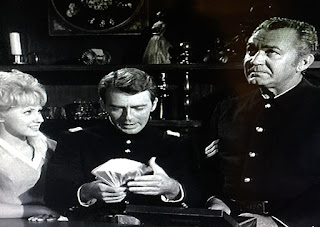 No enemies around to consort with this time around.

The only people offended are the other ladies in attendance at Ms. Lee's performance.  And not just Wrangler Jane: 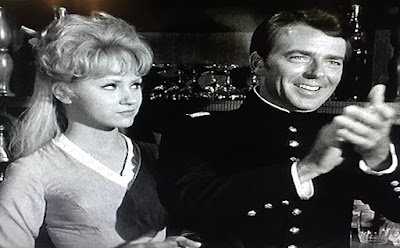 I mean, check out the lovely young lady sitting next to Trooper Duffy: 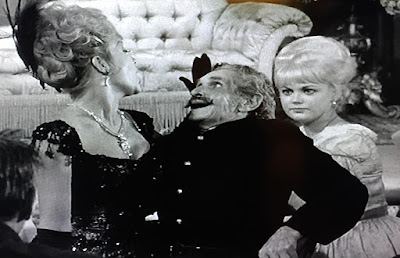 Which brings up our key NAGGING QUESTION:

Why is she so pissed at Duffy's exaggerated response to Laura?  Is she interested in the Fort's  senior soldier?  Do those old Alamo stories turn her on?  What's the deal?

When the punny title is more outrageous than the proceedings, you have a rare first season dud.  Conventional gags and character inconsistencies add up to a subpar outing; just way too soft in all respects.  (*1/2 out of four)