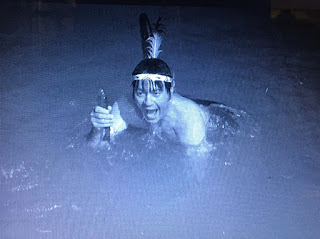 
Corporal Agarn's enlistment is up in a week, and Sergeant O'Rourke sees an opportunity to expand business by allowing it to expire, giving O'Rourke Enterprises a civilian Vice President.  At first Randolph is hesitant: the Corporal is still a cavalryman at heart, and persuasive Parmenter almost has Agarn's name on the dotted line before the Sarge intervenes with the compromise idea of a one week furlough to clear Randolph's "confused" mind. 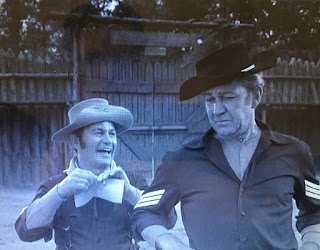 So what will Agarn's Enterprising assignment be during that well-earned leave?  A week in Dodge City to pick out dancing girls for the saloon?  No, Sarge has a stay-cation in mind, sending Randolph to the Hekawi camp to step up production.  Agarn gets a break from the rigors of Army life, the Sarge gets an onsite supervisor for the other half of the business, and after seven days the Captain gets his Corporal back.  Everybody wins, right? 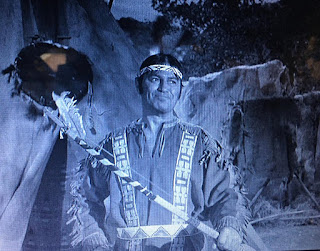 Well, maybe not Agarn--relaxing Hekawi life still can't quite compete with the hustle and busts of Dodge.  Or can it?   O'Rourke arrives with reenlistment papers in hand, and finds his Vice President has gone Indian.  The newly christened "Leaping Lizard" takes his new duties to heart, seeking to make them permanent--and to renegotiate the 50/50 business agreement to 75/25 in favor of the Hekawis! 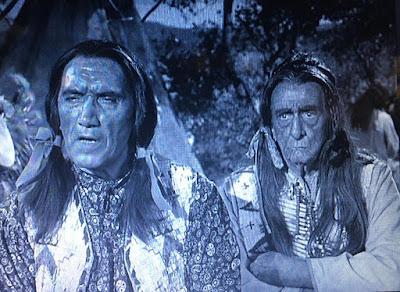 Cringe worthy title, and seeing Agarn take over negotiations for his blood brothers (shades of Nathan Algren) is uncomfortably paternalistic.  But look past the surface and Me Heap Big Injun has aged very well.  To 2020 eyes it's the most concise yet complete skewering of the White Savior Narrative that we're likely to ever see.  Impressive considering the trope's worst offenders were decades into the future in 1965. 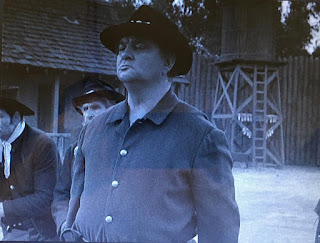 Agarn is no more enthused about the limited assignment than Algren or Jake Sully initially, but the parallels end there.   Agarn faces no learning curve of his new culture: he is instantly the best archer and rain dancer in Hekawi history.  Algren and Sully earn grudging respect from initially distrustful natives: our Corporal goes from honorary Hekawi and appreciated business partner to major pain in the neck for Wild Eagle.  Instead of Agarn joining with the Natives to take on his former cavalry comrades, F Troop joins forces with the Hekawis to battle Agarn, who for all his effort becomes almost as despised as Bald Eagle.


In addition to bringing rain and marksmanship, Leaping Lizard exhibits courage that we never saw from Corporal Randolph Agarn.  Walking across burning coals, wrestling a rattlesnake, canoeing down treacherous rapids and--most impressively--killing a buffalo(!).  Liz may not impress his Chief, and becoming a true blood brother is still problematic, but you'll come away thinking he could probably kick Billy Jack's ass.

Serves the Sarge right for this scheme to blow up in his face, after he dangled the dance hall carrot in front of Agarn only to give him the stick of the camp instead.  After successfully thwarting three Captains and a Major at the Fort, and countless officers visiting it, Me Heap Big Injun shows that the mighty O'Rourke Enterprises faces no greater threat than one from within. 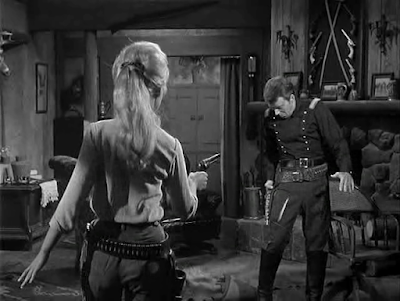 And really, Sarge, why the chicanery with your V.P.?  The current business model seems foolproof when one gets a load of the supply list O'Rourke gets past Parmenter with nary a raised eyebrow.  Barley?  Must be for the horses.  Yeast?  "The hard tack could be fluffier."  With the Army subsidizing that much of the saloon's overhead, O'Rourke and Agarn have a great thing going.

Edward Everett Horton makes his fifth appearance in nine episodes to date as medicine man Roaring Chicken.  Don Diamond has no lines as Crazy Cat, so that changing of the guard is still in the future.  Joe Brooks is MIA as Vanderbilt, but Bob Steele has his usual line as Duffy, who we learn was supposed to be killed in action.  Hey, the Alamo had no survivors according to the history books. 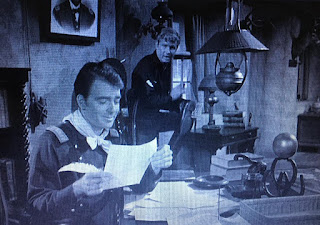 Judging from that aforementioned supply list, it must be booming at the saloon.  Thirty wooden barrels?  Eleven barrels of yeast?  That's a lot of whiskey and beer for a town the size of Fort Courage. 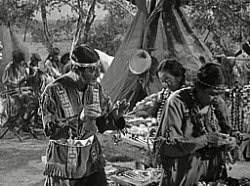 "Cannot make fur coat from feather of goose."  Wild Eagle admits to being under terrible strain, offering this wisdom as evidence of it.

Once, when he joined the Hekawi as "Grizzly Bear".  And since his enlistment wasn't up, he could get desertion as well.  The big news here: O'Rourke is actually ready to make a treason charge--against Agarn! 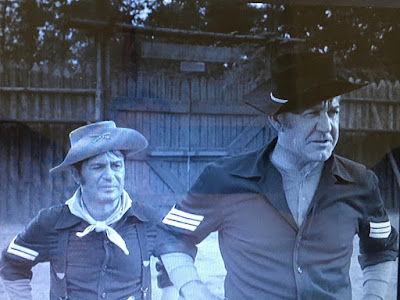 In addition to the comments above, let it be noted that Wrangler Jane comes up with the first logical solution to O'Rourke's problem, providing calm judgement while the uncharacteristically emotional Sarge is ready to make the arrest above.  Lest you fear that this gender role reversal is permanent, O'Rourke comes up with the final, and successful scheme.  The smartest guy in F Troop had a shaky episode before it, though.

One more segment I underrated in my 2006 review of the first season on DVD.  I probably gave it the short thrift since it doesn't burn quite as brightly as its second season flip side, Our Brave in F Troop.  Me Heap Big Injun doesn't reach that sublime level, but it is a sight more impressive than I realized then.  The title makes one wince but Me Heap Big Injun has improved with age--thanks to a tiresome trope that time has had the opposite effect on.   (*** out of four)