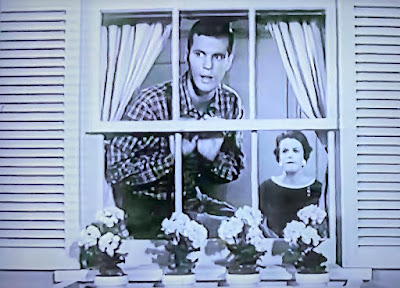 Introduction to the BOB CUMMINGS SHOW/LOVE THAT BOB episode guide.

A new neighbor has moved in next door, and Margaret is hopeful that her brother will get along with her.  Yep, her.  Having parted ways with her significant other, interior decorator Joy Healy is now across the hedge, and both Chuck and Bob feel that she could decorate any interior. 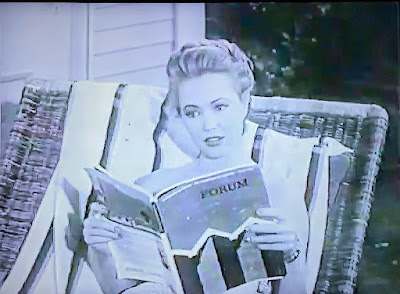 Naturally playboy Bob has designs on having her decorate his, but there are obstacles.  First, Ms. Healy's experience with ex Fred has left her really hating all men.  The other obstruction is in canine form: Joy's German Shepherd Buster, who isn't shy about literally unseating our playboy.  In fact, Bob loses two pairs of pants within hours.  Can The King regain his throne by appealing to Joy in a professional sense?  It's a last resort after every other ploy fails. 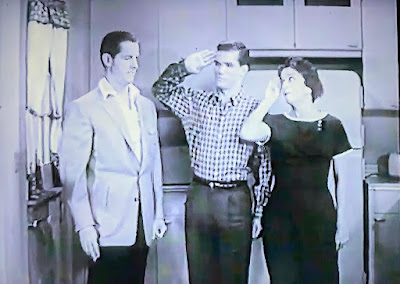 Well, here's a twist.  Bob Collins' never ending hunt for strange takes him to...The Girl Next Door.  Kinda surprising that LOVE THAT BOB exhausted over a hundred stories before reaching this seemingly obvious plot.  When Bob Gets Neighborly the nocturnal wanderer temporarily becomes a homebody, going home for his lunch hour and spending a quiet evening watching television in the Collins living room! 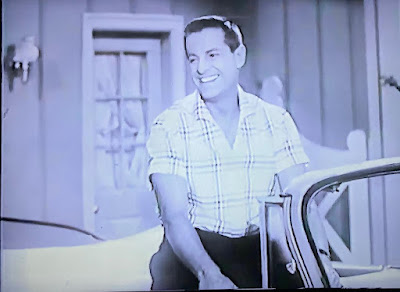 Bob gets only half-support in his (con)quest, with Margaret and Chuck on opposite sides of a bet.  Naturally it's the widowed sister who takes the negative side ("Oh, I hope you do stick to your guns!") but ever-loyal Chuck not only wagers window washing on The King, but literally offers Bob the shirt off his back in support at one point. 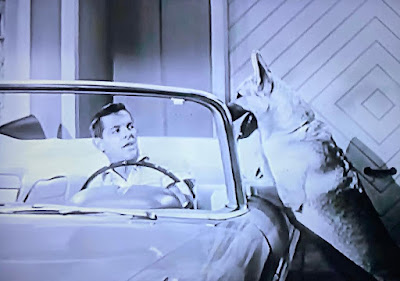 Bob's pursuit raises an eyebrow at times.  Feigning a need for Joy's professional services is expected, but entering her yard uninvited isn't.  Then again, having an adjacent intended is new to Mr. Collins.  And one has to have a grudging respect for going the extra mile like our playboy does.  He even tries to play wingman for Buster in an effort to literally get a foot in the door.  Foreshadowing his eventual fate with the German Shepherd's owner, Bob technically succeeds---yet still fails. 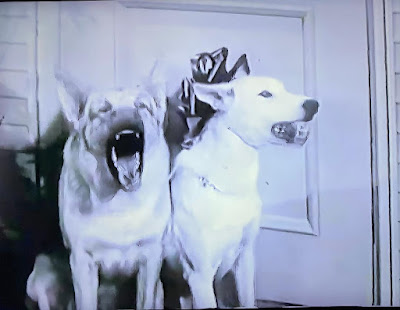 "I bet he usually does pretty well with girls."

Making her only LOVE THAT BOB appearance, Sara Shane is a worthy choice to play the ice queen Joy Healy.  Away from Bob's amorous intentions, she drops the guard enough to admit the above, stating that even Rock Hudson wouldn't interest her in her current state of mind.  (We now know that she wouldn't have interested Rock either, but that's another story.....)  So before we condemn Bob for taking the chase a bit farther than modern audiences might be comfortable with, well--a hint is there that his effort isn't entirely off-base.  Just poorly timed, perhaps. 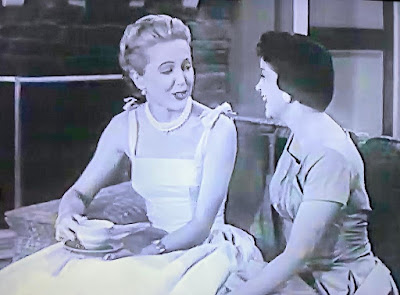 If Bob blows his impression on us, it's in the ending.  An Alpha to admire until the scheme falls apart, Bob pettily reclaims his orange tree after Joy and Fred reconcile.  Yeah, it's funny, and setting boundaries on the orange tree is proper, but losing your cool while doing it just makes you look like a sore loser, Bob!  Too Beta for a man supposed to be King.  Besides, the guy just might blow it again--delayed gratification is still gratification, Bob!  Which you ain't getting by dropping the charm.  Bush league move for a champ--losing points for Bob Gets Neighborly with such a short-sighted finale for a guy who can usually play the long game. 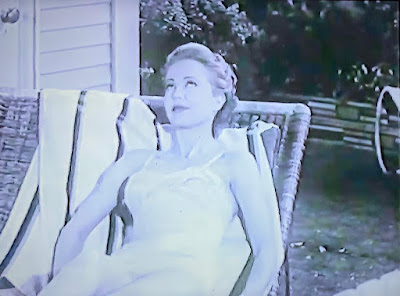 Sara Shane is still with us at age 92, living in Australia when I last checked.  Like the show's star (HOW TO STAY YOUNG AND VITAL in 1960) she's the author of a self-help health book: TAKE CONTROL OF YOUR HEALTH AND ESCAPE THE SICKNESS INDUSTRY came out in 2000.  She left acting in 1964; THREE BAD SISTERS (1956) was probably her best-known film, with fellow LOVE THAT BOB guest starlets Marla English and Kathleen Hughes rounding out the titular siblings. 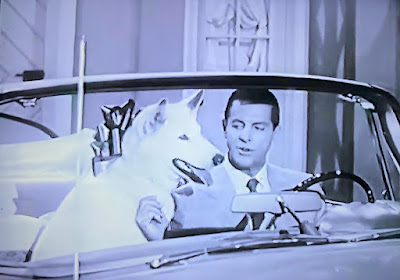 Buster provides one of the show's rare instances of a non-human interference.  Bob should know that a canine is going to be wise to a wolf. 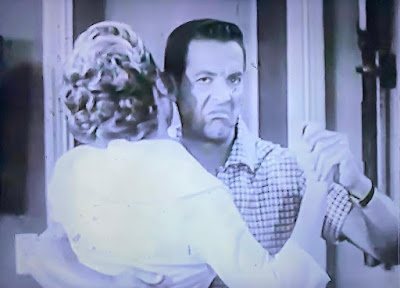 A valiant try, but Bob only ends up being an unintentional Cupid.  Quite a lucky guy, that ex Fred.  He totally blew it with Sara Shane (dumbass!) but Bob's bullshit sets Fred up with a second chance he's done nothing to deserve.  The thanks Bob gets?  Fred says he sounds like a square!   FWIW, my money is on him blowing his second chance--dude still seems unaware.  Put it this way, Buster probably gets that muzzle removed soon.... 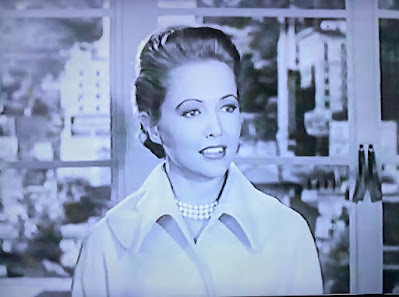