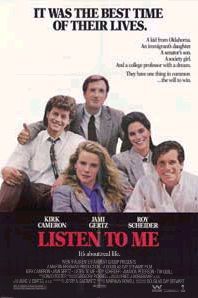 Start with the screenwriter who gave us THE BLUE LAGOON and THE SCARLET LETTER writing and directing a similarly overwrought drama about college debate. Add Kirk Cameron, way in over his head as the leading man, trying to convince us he’s a debate prodigy and a former delinquent from Watonga, Oklahoma. Mix in some suitably embarrassed veterans who are just picking up a paycheck (Roy Scheider, Anthony Zerbe, George Wyner). Set this at a California party school that treats debate just like Notre Dame treats football, with the top debater being the big man on campus. Top this off with some foreshadowing that is less subtle than Dead Meat’s constantly lurking fate in HOT SHOTS!---and ask us to take it seriously this time. After simmering, you have LISTEN TO ME, a worthy late 1980’s contender for multiple Razzie Awards, and quite possibly the most unintentionally funny non-action film of the 1980's (I don't quite think it surpasses DEATH WISH 3 or ROCKY IV, but it comes commendably close). 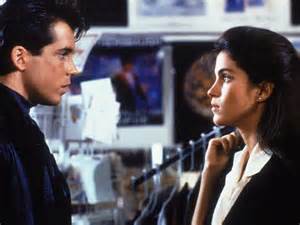 Cameron is a poor chicken farmer’s son from Oklahoma who did time in juvenile hall, then discovered a natural talent for debate. Jami Gertz plays a similar prodigy from Chicago with a terrible secret. Both have been awarded scholarships to Kenmont College to learn under legendary coach Roy Scheider, practically a god on this campus, and his star debater Tim Quill, heir to a Kennedyesque political dynasty. Quill really wants to be a playwright, but Senator father Anthony Zerbe won’t hear of it; he wants his son debating, entering law school, and entering politics upon his graduation (though he seems remarkably unconcerned about Quill’s continuous sowing of wild oats and other youthful indiscretions when one considers his future plans for him). The B.M.O.C. aura surrounding Quill is a façade; he’s really very unhappy in his situation and wants out of debating before he’s “forced” to shine in a nationally televised championship against two cold blooded killers from Harvard (which, we are led to believe, will immediately cinch a future Presidency for this 21 year old). Meanwhile Cameron tries unsuccessfully to court Gertz (and to maintain his Oklahoma accent) and all the California kids party hearty when not debating.

LISTEN TO ME is a complete head-scratcher from beginning to end. I'm trying very hard not to spoil too much here, but here's a few samplings of the goodies that await you:


Quill, who has been presented as the biggest ladies' man on campus, tries to attract Gertz during their first face to face meeting by reciting "Richard Cory". Smoooooth, bud! There's nothing more romantic and soothing than a poem about a guy putting a bullet in his head!

Scheider is debate's answer to Knute Rockne, Kenmont is to debate what U.S.C. is to football, and Quill is considered the best debater west of Harvard (not to mention a future President of the U.S.)---but yet early on we discover they've failed to even win their conference during the past two years, presumably Quill's Sophomore and Junior years! How the hell are these guys considered the best?

Quill finally leads them to a conference title with a deranged, incoherent and psychotic closing argument at the championships equating an abortion to the coach's refusal to help him pursue a writing career(!). 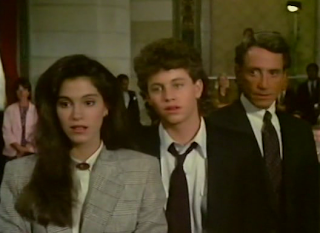 Then, after Quill is unavailable to debate in the climactic National Championship, the first true National Championship in 15 years according to the script, Kenmont's dean wants to "default" rather than face almost certain defeat at the hands of Harvard's finest. But I thought this was the best debate school in the country, led by the best debate coach in history! Can you imagine Pete Carroll forfeiting the Fiesta Bowl because Matt Lienart isn't available?

Christopher Atkins is an earnest romantic trying to win Amanda Peterson's heart, and he is every bit as good an actor as he was 9 years earlier in Stewart's THE BLUE LAGOON. (A much deserved Worst Supporting Actor Razzie for Atkins this time around!)

The way to win a debate is apparently to baffle 'em with bullshit rather than dazzling with command of the facts and logic--especially if you are debating in front of the Supreme Court! Then again, Stewart is the same writer who also gave us the unbelievably liberal 16th century of THE SCARLET LETTER. The poster's tag line, "It's about real life", couldn't be more inaccurate. 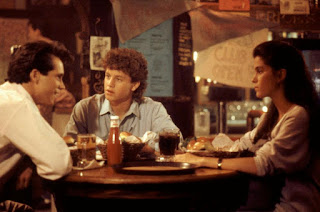 
It was a box office bomb in May 1989, and unlike other 1980's teen films, none of the youthful cast members are in particular demand today. Matter of fact, this film brought Cameron's budding big-screen career to a screeching halt in a matter of weeks.


It's ludicrous, it's hilarious, it's downright insane at times----and just like SHOWGIRLS, VALLEY OF THE DOLLS, DEATH WISH 3 and THE SWARM it should be on DVD so we can all laugh our asses off watching it.

You can play drinking games: i.e., every time Quill makes a reference to death/does something suicidal; every time Cameron shifts in and out of his Oklahoma drawl; every time Gertz gets uncomfortable with a guy, etc. Hey, if you're drunk, the movie just might even make sense!

Then again, probably not.

Anonymous said...
This comment has been removed by a blog administrator.
12:30 PM

I'll definitely have to check this one out...I love quirky, non-sense movies. My dad still thinks I'm crazy for liking the diplomaniacs lol. Ok hope to see ya soon!! Choppie?

sink sink socks said...
This comment has been removed by a blog administrator.
11:12 PM

sink sink socks said...
This comment has been removed by a blog administrator.
11:13 PM

I was like 12 when this movie came out and I was in love with Kirk Cameron so I used to watch it over and over again, never noticing the inconsistencies till now lol. What I will say is I absolutely loved the movie's theme song "Listen To Me" featuring the then little known powerhouse singer Celine' Dion. If you like predictable, cheesy movies from the 80's then this is one to check out if you're stuck at home on a Saturday night.