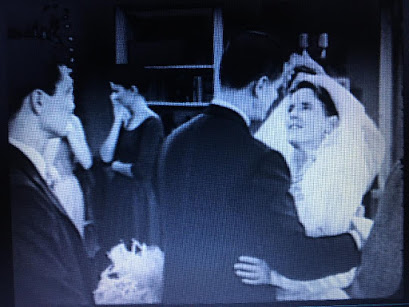 Introduction to the LOVE THAT BOB/THE BOB CUMMINGS SHOW episode guide and series overview is at this link.

Daydreaming yet again about marrying The Boss, Schultzy decides on a new psychological tack: identifying the childhood crush who established Bob's female ideal, then emulating that presumably long-held ideal.  A journey through the Collins family scrapbook turns up a Louisiana southern belle and a black-clad tomboy, and Schultzy lets the imitations begin. 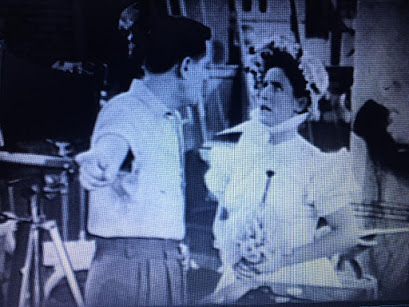 Bob's sister Margaret also states a deep desire: shooing the Swallows who have nested in the chimney.   After failing to deter son Chuck from his tennis game to do the dirty deed, Margaret turns to brother Bob.  Unfortunately, the shifty shutterbug is shuffling Shirley, Lola and Harriet at the office, so his hands are full.  Will Schultzy be able to elbow her way in?  Is she ever? 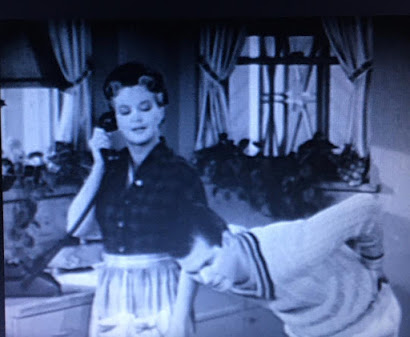 Pared down a writing staff of two for its duration, the final season of LOVE THAT BOB proved too disappointingly reliant on meta guest stars in its first half and too cloying (courtesy the ill-advised addition of Tammy Marihugh to the cast) in its second.  But the show's foundation wasn't completely ignored, and the best episodes of 1958-59 resulted from going back to it.  Schultzy pining over Bob while he juggles multiple beautiful models is the very fulcrum of the series. 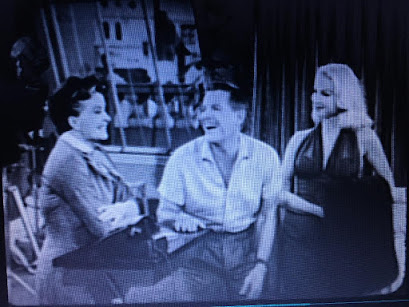 Signalling that we're headed for the tried and true, Bob's Boyhood Love Image begins with a dream sequence--Schultzy's.  Getting married in the Collins living room, with three of Bob's A-list crying and the bride's face obscured by both a veil and the Justice, it's an auspicious beginning.  Once we see her, we know it's a fantasy.  Martha Randolph ends it, yet again trying to enlist Charmaine as a wingwoman for a more realistic double date.

Like fellow secretary Bertha Krause, Martha thinks Collins is the cat's meow yet has no delusions about Schultzy's ability to land her prey.  Whereas Bertha nevertheless supports Charmaine's determination to shoot for the star, Martha tries to keep her pal earthbound--for her own nocturnal purposes here, since she needs a fourth wheel (for her date's parole officer!). 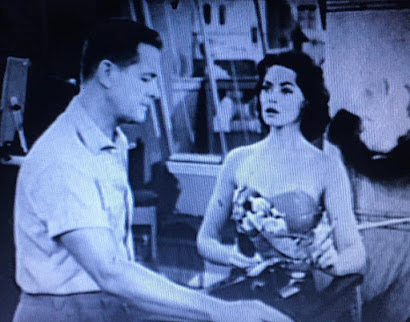 Nostalgia foiled Margaret in her efforts to stop Chuck's goldbricking, but she recovered nicely enough to give her playboy brother the chimney chores.  Proving to be a good sport, she apparently cooked that scrumptious dinner enjoyed by Bob and Shirley and got out of the house for bridge night, allowing dining by firelight. 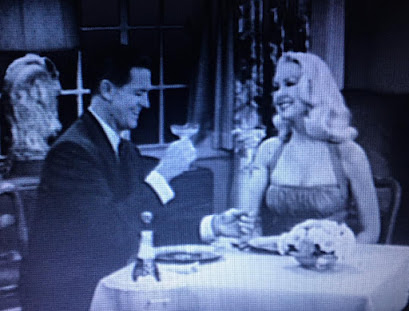 Bob's own task avoidance at home is his downfall, but he's still the King in the studio, adeptly juggling Lola, Harriet and Shirley while sidestepping every suspicion with aplomb.  Learning his lesson from prior failed efforts like Bob Batches It and The Models Revolt, Bob settles on just one date for the evening.  Despite the Master's usual taste for strange, he chooses the very familiar Shirley Swanson over luscious Lola and Harriet's wiles. 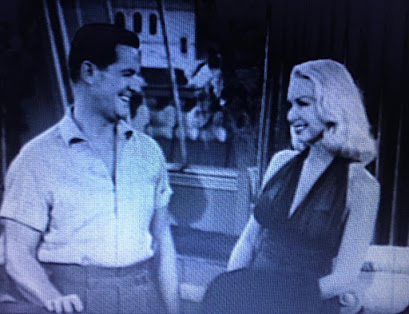 Speaking of familiarity, it's a little late in the game for Bob to suddenly be presenting Shirley with a heretofore unheard of sister--Bob's Boyhood Love Image is the show's 150th episode.  Schultzy has also demonstrated her tomboy tendencies before (remember her powerful fastball in Bob Gets Out-Uncled?) so veteran viewers already know her second persona will be a non-starter.  By refocusing on the original regulars, Henning and Wesson still give us a brisk series of funny situations with snappy dialogue.  Cummings continues to be adept with pacing and camera placement, giving us visual gags to compete with the verbal.  The mid-season rally would unfortunately be short-lived, but Bob's Boyhood Love Image is a worthy addition to any season and a very impressive entry for any series with this many stories behind it. 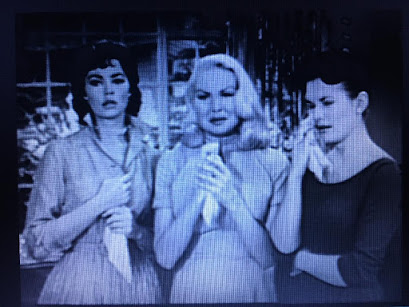 The always welcome Joi Lansing was joined by two starlets we didn't see nearly enough of: Dorothy Johnson (Bob Retrenches) had but seven credited appearances outside of LOVE THAT BOB, and disappears here after the dream sequence.  1953 Deb Star Barbara Darrow (QUEEN OF OUTER SPACE) played three different models in three different CUMMINGS shows.  Justice of the Peace Edward Earle dwarfed the rest of the cast with a whopping 449 credits in a career that dated back to 1913. 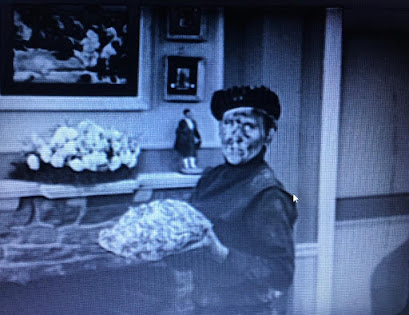 Schultzy's Southern Belle routine is swatted away during the photography session with Lola, and Margaret is neutralized with Bob's promise to relocate the swallows.  Margaret briefly blocks Chuck from his tennis date with Carol Henning, and for much of Bob's Boyhood Love Image it looks like the blockers will be kept at bay.  That is, until Schultzy finally gets her way in a soot-covered finale.

He was certainly headed for a trip around with basepaths with Shirley Swanson before the unfortunately timed chimney malfunction, and definitely appears to have a foot in the door with Lola while on the clock.  If the latter happened, we didn't see it: this was the last of Barbara Darrow's three segments. 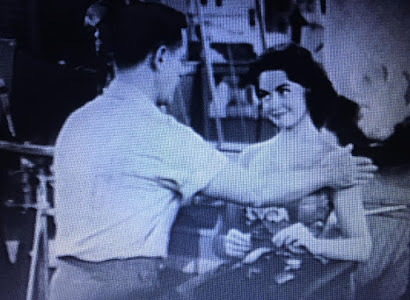 When Henning and Wesson went back to basics, they came up Aces.  Bob Plays Margaret's Game stands with the show's very best installments, and this winner brings the crazy without a deep delve into slapstick silliness.  It would be something of a last hurrah for LOVE THAT BOB's glory days, with meta visits from Steve Allen, Art Linkletter and Mamie Van Doren in succeeding weeks followed by the show's acquisition of its very own Cousin Oliver with Bob the Babysitter.  That said, it is one hell of a reminder of the punch that even an aged LOVE THAT BOB was capable of delivering from its durable original premise.  (*** out of four) 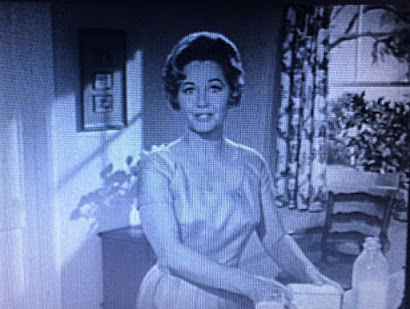 Bob's Boyhood Love Image is available on Shokus Video's LOVE THAT BOB VII, titled "Schultzy Recreate's Bob's Past".  Uniquely, the print is from a 1960 daytime airing on ABC, and features original commercials from Mary Cummings, the Mrs. from 1945 to 1970.

UPDATE: You can now watch this episode on YouTube: