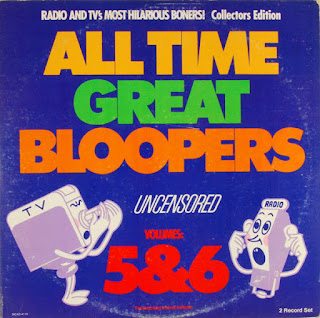 Want to revisit the first in this series of Kermit Schafer blooper releases? 100 SUPER DUPER BLOOPERS is reviewed and deconstructed here.
1977 marked the Silver Anniversary for producer Kermit Schafer and his bloopers.  As always, the Blooper Man was all over our existing media of the time to celebrate.  (Can you imagine what a born promoter like Schafer would have done with today's social media?)  A quarter century after the first Blooper LP sold over two million copies for Jubilee records in the early Fifties, Schafer released dueling multi-volume sets on K-Tel and MCA to mark the milestone year.
As I noted in reviewing the well-remembered K-Tel anthology 100 SUPER DUPER BLOOPERS Kermit had to keep it fairly clean on his releases for Philip Kives' wide-reaching company.  Only one in five bloopers on that set contained profanity and F-bombs were verboten.
MCA apparently had fewer qualms: we get two of the latter in the first ten bloopers of this more raucous set. ALL TIME GREAT BLOOPERS VOLUMES 5 & 6 is also marginally more profane overall (closer to 25%), and commendably has far fewer repeat blunders from previous Schafer epics than Volumes 1 through 4 contained.  But the $64 question is: how authentic was Schafer this time around?
If you'd like to follow along with me, the entire 49 minute two LP set has graciously been uploaded to YouTube:
VOLUME 5: SIDE ONE (0:00 TO 13:34)
1. 0:00 Bank Robbers 2. 0:37 Cash Register 3. 1:14 Pregnancy Report 4, 1:29 Telephone Interview 5. 2:15 No Smoking Please 6. 2:40 Jack Paar/Kaye Stevens 7. 3:22 Big Ben's Clock 8. 3:38 Candles 9. 4:23 News Report 10. 4:36 Crank Up 11. 5:08 Chesterfields 12. 6:36 Pope 13. 7:20 Farmer's Crop 14. 7:38 Engelbert Humperdinck 15. 7:27 Micro-organism 16. 8:43 Bread Baker 17. 9:06 Betrayed 18. 10:40 Twilight Time 19. 11:10 Technical Difficulties 20. 11:23. BBC Soccer 21. 12:02 Northwest Orient Airlines 22. 12:11 Georgia Peach 23. 12:29 Telephone Interview
FAKES/RE-CREATIONS: 1, 2, 5, 7, 9, 15, 20
THE REAL DEAL: 3, 4, 8, 10, 11, 12, 14, 17, 23
1. held up "a bank" this morning.  Ever NOT hear the bank identified by the newscaster?
2. The first appearance on this 2-LP set by the male contestant, but not the last; sure sign of a "re-creation"
3. Governor Rockefeller's veto took place on May 14, 1972.
5. As much as I want to believe this one, the actress pops up elsewhere on this record.
6. Kaye Stevens lost her virginity on Jack Paar's TONIGHT SHOW on November 17, 1961.
7. This actress pops up elsewhere on the record also.
8. Candle Grove was located at 3066 Grand Avenue in the Cocoanut Grove section of Miami, Florida.  Schafer seemed to have tons of Florida-centric bloopers on his later albums after moving his headquarters to Coral Gables in 1965. 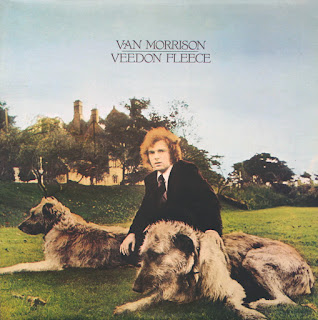 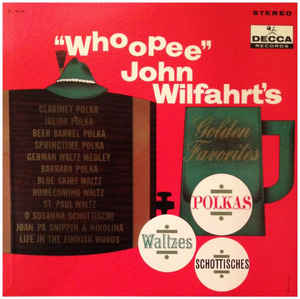 1. "Whoopie John" Wilfahrt (1893-1961) understandably tended to withhold his last name from his professional moniker during a career that included recordings of 1,000 polka songs.  Gotta put a face with the name, though, right? 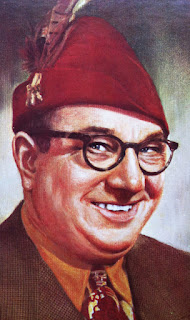 2. David Dick (1930-2010) was a CBS correspondent from 1966 to 1985.
3. Maybe she's really a "streetwalker", eh?  Sounds a little too forced to be real IMO.
4. Between Whoopie John, Cedric Adams and this one, we seem to have a lot of Minnesota material for some reason.
6. Re-creation.  I don't doubt that it happened, but this ain't Bob Eubanks and "our newlywed game" is suspect.
8. This blooper also made it onto 100 SUPER DUPER BLOOPERS, the only one to appear on both records.

9. In Schafer's posthumously published 1979 BLOOPER TUBE book, Peter Jennings' photo accompanies this one--but the actor here is heard elsewhere on the record (such as the Fulton Lewis Jr. blooper below) While this is definitely a re-creation, a Marine patrol did indeed liberate a V.C. prison camp near Duc Pho on July 23, 1967. 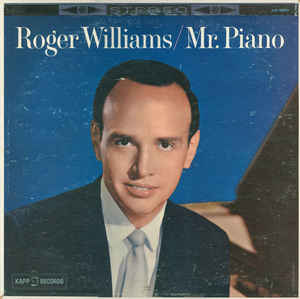 10. Roger Williams tinkled on that Don Knotts Special on Thursday, October 26, 1967 at 8 PM ET on CBS.  Andy Griffith and Juliet Prowse were also in the cast. 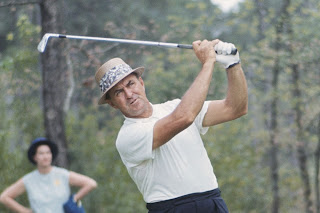 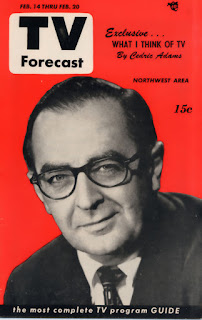 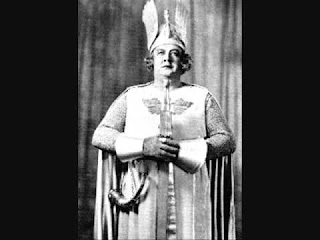 19. Is documented to have really happened to Melchior at the Metropolitan Opera--in 1936. Recreated but true.  Melchior sang Lohengrin 105 other times between 1927 and 1950.
20. Mickey Redmond was shooting for a third straight 50 goal season in 1974-75.  He underwent that back surgery at University of Michigan hospital on December 18, 1974.  Unfortunately his back difficulties continued and he was out of the NHL at age 28 two years later.  Incidentally, that isn't much of a prediction, since he's going to miss 50 games of a 82 game season!

21. Shades of the notorious Uncle Don re-creation, and just as apocryphal.
MOST VALUABLE BLOOPERS: To these ears, the top five: 1) Ma Bell Satire; 2) Chesterfield's; 3) Gunsmoke; 4) Betrayed; 5) Cisco Kid
Volumes 1 through 4 of this MCA set did a lot of recycling of the best known bloopers from Schafer's quarter century of goofs.  There's newer material throughout the last two volumes and several longer pieces.  As a result this one sounds fresher to 2020 ears, and provides a fascinating time capsule as always.
THE FINAL TALLY:  Hopefully the readers can fill in some blanks for me this time.  28 out of 81 I have a question mark on.  For the rest I'm counting 27 authentic and 26 not, making this one more of a 50/50 proposition than 100 SUPER DUPER BLOOPERS which I felt was 65% the real deal.  As always, comments, suggestions and complaints welcomed. 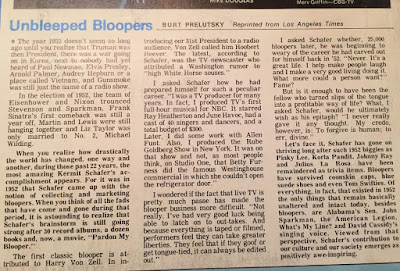 I first had heard of Kermit Schafer in ads promoting one of his compilations that included mispronouncing a president's name as "Hoobert Heever". Back in 1973, a few friends and I cracked up over that one.

If Kermit was still with us, he probably would have at least two CD's of Trump bloopers & botches!

Great post. Definitely this one of the informative and useful posts to me. Thanks for the share. Marine accessories with the best quality of stainless steel. If you want to buy with great quality then click the transom boat