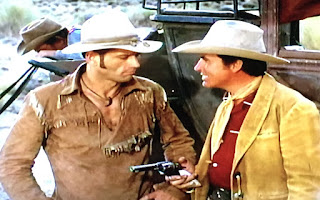 Acting on an erroneous tip from henchman Kyle, Comanchero leader Rodrigo attacks a stagecoach thought to be carrying a gold shipment.  But bullion isn't included in the cargo: just Angie Dow, Hondo Lane and D.C. emissary Biddle, en route to Fort Lowell.  After killing Biddle and the driver, Rodrigo decides to salvage something from the failed mission by holding Angie a ransom of $3,000, payable to him at his natural fortress in Val Verde Canyon. 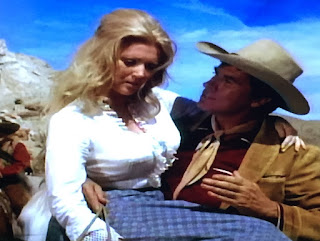 "I don't have the authority!"

An international incident is a concern, as Captain Richards is disallowed under U.S. treaty with the Mexican government to cross the border with troops.  With extradition even for Biddle's murder out of the question, Hondo gamely tries to raise the seemingly impossible amount.  Meanwhile, Buffalo rides to Tucson for a direct appeal to Colonel Crook, and Rodrigo insinuates to his captive that he isn't planning to honor his own terms. 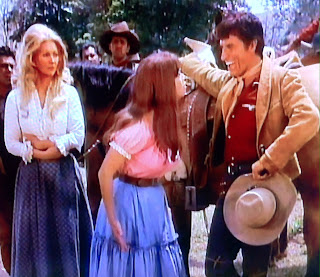 "She belongs to somebody, eh?  Maybe you, amigo?"

During the series' all-too-brief fun, Hondo Lane dealt with three different kidnappings involving those closest to him, with Angie Dow's abduction in Hondo and the Comancheros being the first.    Fortunately, Buffalo can help here, with both the fundraising and the personal appeal to Colonel Crook.  And while Captain Richards' hands are tied militarily, he still contributes his own money to the cause--as do his subordinates, who all gave "what they have, and some they didn't".  Even town drunk Willie (one of four HONDOs for long-time Bowery Boy Billy Benedict) is willing to forego his next three drinks for the cause. 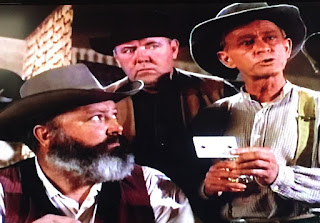 "I got a lucky feelin', Mister."
While this isn't quite the helpless and urgent situation Hondo would face in Hondo and the Gladiators, it's still a dicey one.  The time allotment is only marginally more favorable (roughly 36 hours--"tomorrow before sundown"), and $3,000 is an impossible amount given the window and location.  With Rodrigo, the latter is almost certainly intentional. 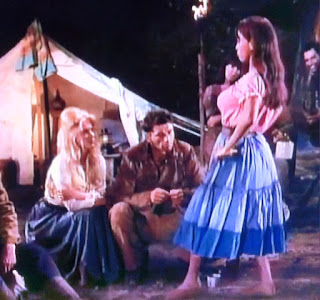 "It's a large tent, Amigo!"
Frank Paris' script has some racy elements for the series (and era).  Rodrigo's avarice isn't limited to money: in fact, he hints strongly that he'd prefer a nightly threesome with the widow Dow and his buxom girlfriend Teresa to the sizable ransom.  Rodrigo even implies that Angie might become the "new number one"--but only when he's out of Teresa's earshot.  With good reason: Teresa responds to Rodrigo's suggestion in predictable fashion ("I will not touch her!!") and the jealous Latina becomes the biggest threat to Angie's safety.  Suffice to say that Lamas is the show's lustiest villain.  Well, verbally, at least.  (The only close competition is Nick Adams' almost mute Apache Kid.) 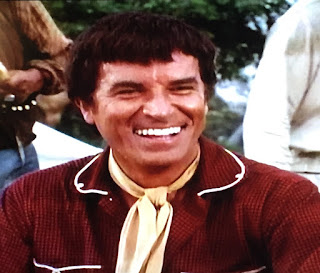 Fernando Lamas puts his effortless charm to good use here as Rodrigo, whose perpetual smile brings little comfort--he drops it to send a message (by murdering Biddle) for only a few seconds, then flashes it again once the body hits the ground.  We keep expecting his carnal desires, greed or arrogance to be his undoing, and Paris keeps you wondering which character flaw will ultimately be the fatal one for Rodrigo.  Lamas' jovial menace was also memorably effective a month later in one of the highlights of THE HIGH CHAPARRAL's first season, The Firing Wall. 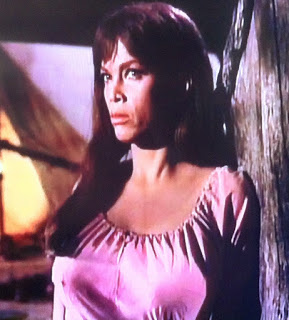 Lamas and a reliably fiery Gomez are the obvious front-runners in the larger-than-usual guest cast.   Glenn Langan returns as Tribolet, making the same snarky comments about Hondo's relationship with Mrs. Dow and adding a curt dismissal about Lane's lack of collateral. 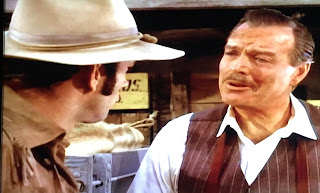 For the only time, Tribolet doesn't meet the chief antagonist, but they'd have gotten along swimmingly--Tribolet's money hunger far outstrips even Rodrigo's.  Curiously, Benedict is uncredited, a fate that often befell longtime stuntman Tom Henessy, cast here as a burly cardsharp. 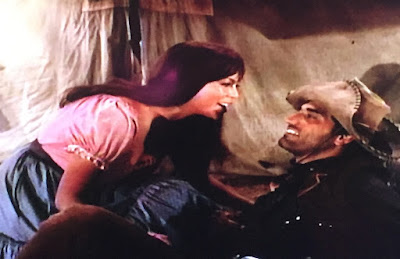 Emberato punches heartless Victor Tribolet after the freighter, sensing a great opportunity to pick up the Dow store, refuses to loan him the ransom money despite having it many times over.  Later, the attempt at raising the funds brings Hondo Lane to the poker game, where he is forced to kick the living crap out of that poker cheat at Joe's.  Speaking of... 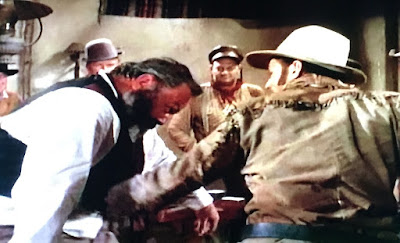 For once, Joe the bartender actually complains about the damages, which is odd because his watering hole is pretty much unscathed but for a single broken chair--probably the brawl requiring the least furniture replacement to date! 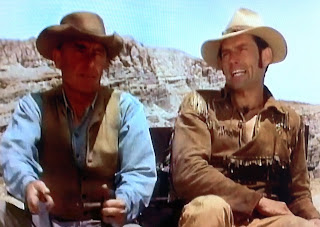 Hondo restricts Sam to Fort Lowell for the duration, to serve as Johnny's therapy dog during his mother's absence. 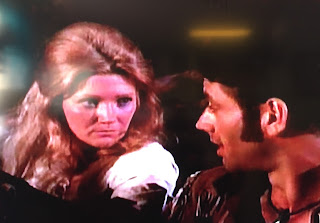 Long-time Horn Section readers know how yours truly feels about the latter, but there is no wrong answer to this one, right guys?


I keep reading that we're currently enjoying the Golden Age of Television, but on a Friday night in 1967 you could watch Marie Gomez and Kathie Browne have two catfights within an hour--with bosomy Ms. Gomez throwing in a sexy flamenco dance for good measure.  If that doesn't prove there was must see TV a half-century ago, I don't know what would.  Fernando Lamas excelled at bringing smiling scoundrels to life, and his flamboyant performance further enhances this entertaining segment.  (*** out of four) 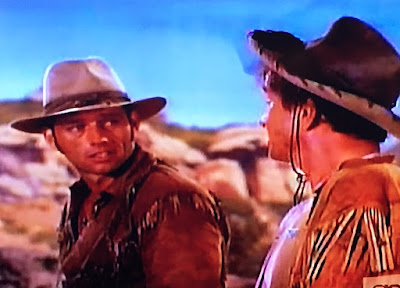 HONDO airs every Sunday morning at 10:15 AM Central on getTV.  The complete HONDO series is also now available on DVD through Warner Archive. 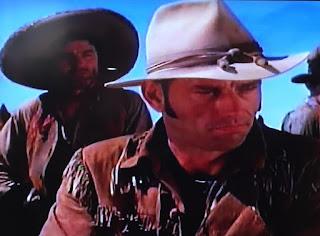 Oh, and Happy 50th, HONDO!  The first episode aired on ABC-TV fifty years ago this Friday!