As a huge fan of the CBS cult classic THE WHITE SHADOW I had Season Two on preorder prior to its March 21 release.

I feel the series peaked during this second season. After it, many key cast members graduated from high school in a realistic, gutsy, but dramatically depleting move. By Season 3, Gomez, Hayward, Goldstein, Jackson, and Reese were all gone and replaced by new cast members that didn't have the same appeal. Also missing in S3: Ed Bernard, as Joan Pringle's Sybil Buchanan was promoted to principal. They were all sorely missed, and the series was cancelled after that third and final season. 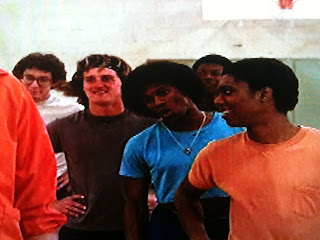 But in Season Two, THE WHITE SHADOW really hit its stride. For starters, the show was astoundingly prescient. You had episodes with athletes betting on their own games ("On the Line"; a full decade before the Pete Rose controversy), female teachers having sex with their students ("Salami's Affair"; just compare this 25 year old episode to today's headlines!), segregated country clubs ("Links"; this would become a big controversy in the early 1990's), venereal disease ("Me?"), passive-aggressive racism towards black athletes playing quarterback and point guard ("Crosstown Hustle"), and child abuse ("The Hitter"). And that's just 6 of the 22 episodes in this underrated drama's best season.

A quick review, episode by episode. Titles of Key episodes in bold:

"On the Line": Curtis Jackson (poor guy, a dark cloud follows him around all season) gets involved with a bookie, with predictable results, at the same time that an aspiring journalist follows the team around. A point is also made about journalistic responsibility, and made far more successfully than in the awful Happy Days episode in which we learn the Fonz is afraid of liver. *** 1/2

"Albert Hodges" After a wrongful imprisonment, the bitter Hodges comes back to finish high school with a heightened radar for discrimination and a major chip on his shoulder, threatening to divide the team. Commendably open ended final scene. *** 1/2

"Sudden Death" Haywood Nelson of What's Happening! guest stars as a talented new player who has an undetected heart defect, with tragic results. Great performances by Howard and one of my all-time faves, Madge Sinclair as the boy's mother. Some very uncomfortable moments, with another cliche-defying ending. ***1/2

"A Silent Cheer" Coach Reeves and the father one of his players both have to face the fact that dreams die hard, and it is time to move on. ****

"No Place Like Home" Coolidge moves in with the coach after his apartment building burns down. ** 1/2

"Globetrotters" I was never a fan of the "special guest star" episodes, which were fortunately very scarce during seasons 1 and 2. Coach Reeves enlists the help of his good friends, the Harlem Globetrotters. to cure his team's collective big head. **1/2 This episode has a commentary with Byron Stewart (Coolidge), Kevin Hooks (Thorpe), Erik Kilpatrick (Jackson) and Ira Augustain (Gomez).

"Me?" A triangle involving Coolidge, Thorpe and Coolidge's new girlfriend, and the consequences of one casual encounter. Several intense dramatic scenes, especially the closer between Coolidge and Thorpe. ****

"Needle" Hayward deals with his grief after the overdose death of his young cousin. Despite the 'Hayward as Paul Kersey' plot, this one is emotionally draining from beginning to end. **** Commentary by Victor Lobl, director

"Sliding By" An episode dealing with the perils of grades being handed out for athletic prowess. In this case a very gifted transfer student with an impeccable transcript turns out to be less gifted than we thought. **** 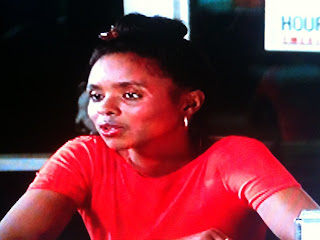 "Delores, of Course"  Debbi Morgan guest stars. Poor Curtis Jackson. A bout with alcoholism, a gambling problem, and now the love of his life returns to Carver from San Francisco....with a very dark secret. Heartbreaking final shot that will stay with you. **** My favorite episode of the series, with a great contribution from Joan Pringle in her scenes with Morgan.

"A Christmas Present" The obligatory Christmas episode. Oh well, it's pretty good as these things go. We learn here that Sybil (Joan Pringle) has a husband. I had always suspected she and Coach Reeves secretly had the hots for each other, myself. :) *** GUEST STAR: Sybil's husband is played by Joan Pringle's real life husband, the late Theodore "Teddy" Wilson. You'll recognize him as Sweet Daddy from "Good Times".

"Feeling no Pain" The team has a brush with drugs after Salami hurts his knee. Another episode way ahead of its time. ***1/2

"Artist" Thorpe discovers a talent for art. His father is unenthused. **1/2

"Salami's Affair" Still very relevant as noted above; Salami gets very, very special attention from a 'progressive' teacher. Some very realistic and uncomfortable moments and one of the series' finest hours. **** 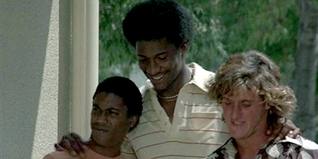 "Links" The coach takes the team to a country club, which turns out to be unofficially segregated--remember when country club segregation became a major issue in the early 90's? Many hilarious moments as Salami and Coach double date (real appropriate, huh?) and Coolidge and Thorpe try golfing ("hit it with a closed face"). **** A sober topic that very few series would dare to mine is explored and yet, thanks to the scenes described above, this is the funniest episode of the series.

"The Stripper" Special Guest Star alert! Sports movie icon Randee Heller (she was the great Gabe Kaplan's wife in "Fast Break" and the "Karate Kid"'s mom) plays another progressive teacher; no, she doesn't have the hots for a student, just Coach Reeves. But he doesn't know about her other job...... *** 1/2.

"Gonna Fly Now" The sale of angel dust around Carver High. A distant third to "Feeling No Pain" and "Needle" along these lines. **1/2

"Out at Home" Coach Reeves is promoted to athletic director, over the unpopular baseball coach. Very interesting episode in which most of the regulars take a back seat; more than anything a character study of the bitter old Carver baseball coach (very well played by guest star James McEachin). ***1/2 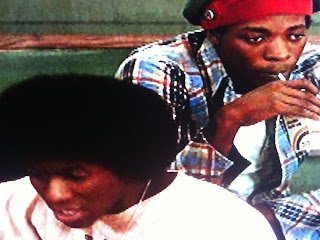 "The Hitter" Gomez deals with abuse at the hands of his father. ***1/2

"The Death of Me Yet" Once again, poor Curtis Jackson. Wrong place, wrong time yet again, this time fatal. As in "Sudden Death", a very powerful episode about the aftermath of the tragic, senseless death of a teenager. Perhaps the best scene of the entire series takes place when Coach Reeves meets Jackson's younger brother. **** 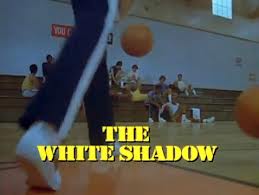 "Coolidge Goes Hollywood" Embarrassing. Sole value is camp value, as Coolidge improbably becomes a TV star. It does have valid points to make about racism in media 20 years before Spike Lee's "Bamboozled", but the setup is so unrealistic, so farfetched, and clumsily set up, that it is impossible to be very involved with anything happening here. Worst episode of the first two seasons. * Special Guest Stars: Ed Asner as himself(!) and George Wyner. 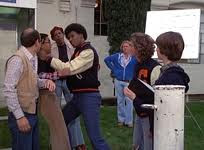 "A Few Good Men" Graduation approaches, Goldstein considers the Marines, and.....Reese considers a recording career? Anticlimactic, which is probably the point after a championship is won, but still, a great, great season limped to a close with two very subpar episodes. *1/2

Director Lobl is very informative in discussing "Needle". There's also a producer's commentary on "Death of Me Yet", a feature on the budding directing careers of Thomas Carter (Hayward) and Kevin Hooks (Thorpe), started on this show, and an 18 minute retrospective on Bruce Paltrow. A very nice set of extras.

Myself, I would have liked some input from unsung heroine Joan Pringle. Season 3, perhaps? With the onscreen chemistry between the two actors, a Howard/Pringle commentary would be interesting. 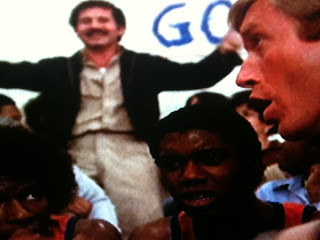 A very strong, solid season, despite ending with two false notes. Better than Season One, and the series is at a definite peak with "Needle", "Links" and "The Death of Me Yet" in particular. There's much more going on here than basketball, and though it is impossible for something 25 years old not to be dated, you'll be amazed how relevant many of the issues still are. And on DVD, the series never looked better. I think you can overlook 3 weak episodes out of 24 and give this ****.
Posted by Hal at 8:29 PM

I love this show. I have the DVD's also and your reviews are right on! I can't wait for Season 3. Keep up the reviews!

Sybil and Ken never got it on? There certainly was chemistry between the actors. In fact, there are a few scenes between Pringle and Howard that appear to have been either hastily scripted or mostly improvised to add running time to episodes. CBS already had an interracial relationship on THE JEFFERSONS, so it seems unlikely the network was afraid to press the issue...and I doubt Bruce Paltrow was either.

If you get a chance to comment on the extras, please do so. I liked the Howard/Van Patten commentary on the Season One set. Jackie Cooper seemed a little out of it during his chat though.

Hal said...
This comment has been removed by a blog administrator.
11:15 AM

Thanks, Jaws and Marty.

Marty: I've added a little more info on the extras.

Through the magic of Hollywood Poker (I didn't play there long) I did discover during a chat session with none other than Ken Howard the answers to two burning questions. Actually, I believe Jaws was the person who asked Mr. Howard the following two questions:

Did the shot by the autistic kid go in or not?

Did Coach and Sybil ever 'get together'?

Howard answered yes to the first and no to the second. :) I find the first hard to believe though. Thomas didn't have much game.

She was noticeably pregnant during the latter half of season two, with twins I believe.

I've been watching this show again and I have to say that over all the writing, acting, everything is so much deeper, wiser and emotional than many of today's shows. Today's show are more complicated in terms of multiple plots that are like puzzles to figure out but they are emotionally shallow in comparison to the struggles of the characters in shows like The White Shadow. ANyone else sense this change from the 70s till today?