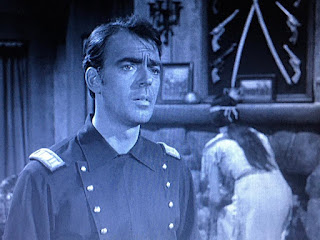 While picking up the latest batch of booze for the saloon, O'Rourke and Agarn witness the kidnapping of Wild Eagle's daughter Silver Dove.  The abductor: young Shug War Cloud, who asked the Chief for Silver's hand in marriage and was rebuffed.  We all know the Hekawi are lovers, not fighters.  Knowing that and needing to keep his 50/50 partner happy, the Sarge convinces Captain Parmenter that a rescue will further strengthen the troop's treaty with their "ferocious" native neighbors. 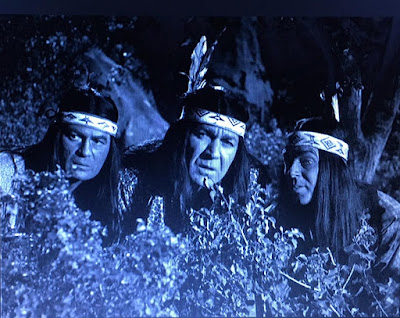 Inspired by his reading of The Last of the Mohicans, Parmenter attempts the rescue via infiltration using only his non-coms.  But Silver Dove has a surprise: she isn't there against her will, and initially refuses to leave the Shug camp.  Nevertheless, her father's wish wins out and she is returned home, safe and sound.  But now O'Rourke has a bigger problem: Hekawi tradition dictates that Silver Dove must marry her liberator--the Captain. 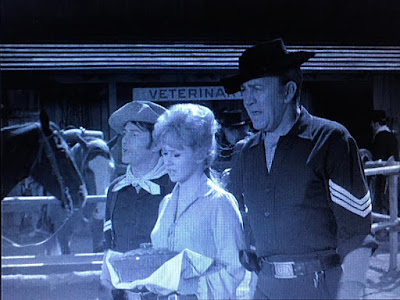 Wild Eagle's business sense is undeniably shrewd, but the Chief has an Achilles heel with his reluctance to let Hekawi customs slide when (also the case in A Gift From the Chief) the Medicine Man prods him to observe them.  Series newcomers Al Gordon and Hal Goldman contributed that middling exploration, but with Here Comes the Tribe, F TROOP co-creators Ed James and Seaman Jacobs come up with an analysis far richer in comic possibilities. 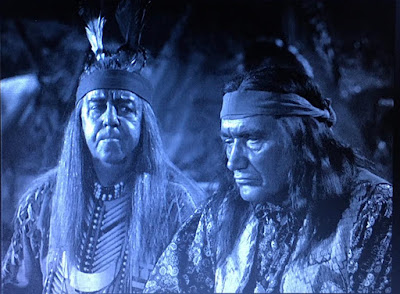 "Why you think we make paleface blood brother?  U.S. cavalry always comes to the rescue!"

In fact, Wild Eagle might be playing 4-D chess (as he would the following week in Iron Horse Go Home).  Think about it: having the Scourge of the West as son-in-law offers far greater protection than the current arrangement with O'Rourke, and might well result in a renegotiation of that 50/50 pact with O'Rourke Enterprises.  After all, who has more to lose from the Captain finding out: the non-coms or the Hekawi?  Mind you, I'm just mulling possibilities--O'Rourke is the only one to mention the business ramifications of the arranged marriage:

"If the Captain marries Silver Dove, we might as well turn honest!"

In Here Comes the Tribe we meet Wild Eagle's daughter Silver Dove, a third child after Bald Eagle and Boy Deer.  Those sons from a prior union are severed from the tribe, but Silver Dove remains Hekawi (at least, until the end of Act Two) and her mother is still Mrs. Wild Eagle.  We know Wild Eagle's opinion of suitor War Cloud (that of the Mrs. remains a mystery) but despite disliking his daughter's choice, she remains in better standing than her brothers--Wild Eagle goes outside the family for his Chief-in-waiting, opting for Crazy Cat. 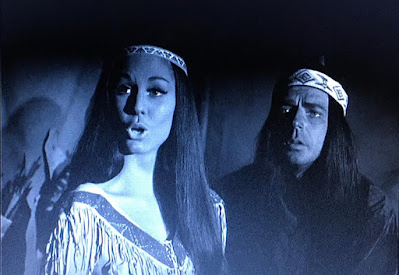 As for O'Rourke, he's clearly back from his mini-slump.  After Professor Clyde and Lily O'Reilly showed us cracks in the armor on consecutive weeks, the Sarge deftly handles the crises as they come at him furiously here.  He may indeed be a little old to be playing Indian, but he does it successfully--twice.  And doesn't even have to walk on his knees the second time, thanks to that wild horse! 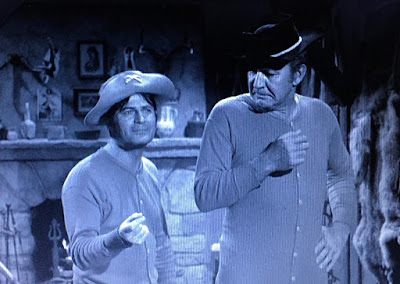 James and Jacobs did let a few groaners like that line through, but they keep the gags coming so rapidly that the clinkers go virtually unnoticed.  It helps that all three principals get superb material.  Parmenter gets to do some delicate balancing of his own, first between Wrangler Jane and Silver Dove and then taking the postponement push over from Agarn when the realization hits him at the Hekawi ceremony.  Hey, we even get a few risque lines from the JJ's--what's not to like?

"I didn't know Indians kissed!  In The Last of the Mohicans, they rubbed noses."

"Well, that's why they were the Last of the Mohicans." 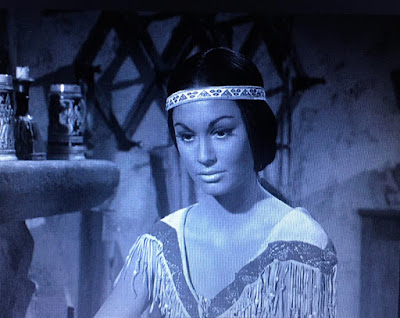 Laurie Sibbald (The Girl From Philadelphia) returns for arguably the most remembered role of her too-brief acting career.  The ballerina prodigy was retired from acting barely a year later at 22, but not before also scoring credits on TARZAN, HANK and a regular role as Sammy Jackson's love interest in NO TIME FOR SERGEANTS.  Publicity for that show indicated her indifference to an acting career.  To give an idea of her potential, she was a Deb Star of 1965 alongside Raquel Welch and Barbara Parkins.  Her romantic partner here, Makee Blaisdell (Hondo and the Comancheros) gets his first post-HAWAIIAN EYE credit as War Cloud. 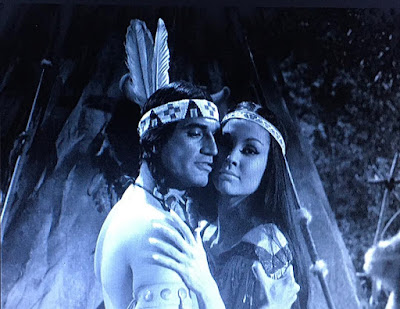 J. Pat O'Malley ends his two segment run filling in for Edward Everett Horton, who departed for the Broadway revival of CAROUSEL and found himself written out as Don Diamond's Crazy Cat took over as Wild Eagle's confidant.  One could say that was the final piece of the show's puzzle, but Here Comes the Tribe reveals F TROOP to already be a well-oiled machine fifteen episodes in. 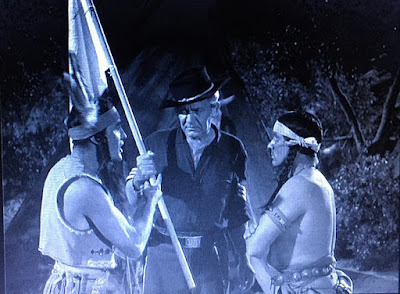 Private Vanderbilt is incapable of distinguishing the flagpole from a horseshoe stake, or turkeys from Indians in the lookout tower, but he can successfully identify Natives inside the fort--he's the first to spot and attack O'Rourke, Agarn and Parmenter in their disguises. 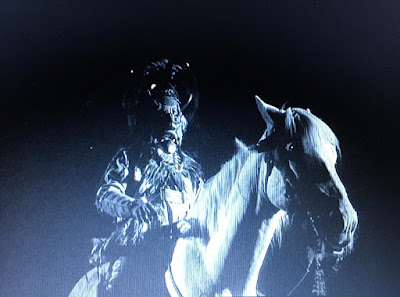 O'Rourke Enterprises faces a more insidious threat this time, and it is much more diversified than we realized.  The bread and butter might be a tourist trap and saloon, but the Sarge also owns a laundry, a hotel, and a real estate office on Boot Hill.  Having a town full of heavy drinkers is gold.

Captain Parmenter was saved from an arranged marriage by the consortion with the Shugs, so I think he'd let the Sarge slide this time.  Manual or no manual.

"When field mouse see shadow, time to string beads."  Makes more sense than most even if Wild Eagle doesn't know the meaning.

"If I wise old Indian, would I have him for Medicine Man?"  This straightforward question is answered soon enough, as Here Comes the Tribe would be the character's swan song.

The big news, though, is that Captain Parmenter has a wise old cavalry saying: "There are two sides to every rock and it takes all kinds of Indians to make the west." 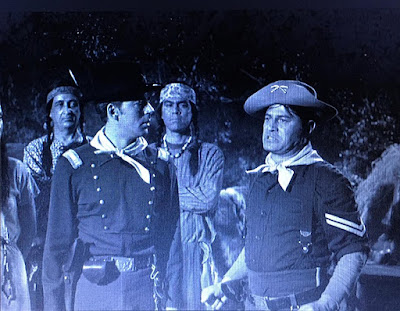 Agarn seems far more frightened by the "flashy quack" who 86's the wedding once and for all than the supposedly superstitious natives.  On the other hand, there's this exchange between the Sarge and the Chief:

O'ROURKE: "You can't make the Captain get married, he's not a redskin!"

The mojo is strong with both O'Rourke and F TROOP; not many pratfalls, but superb verbal and visual humor without them.  Lots of Enterprises intrigue for the second week in a row, but a far more grounded situation this time--at least, for F TROOP.  Some of Agarn's finest moments as he valiantly tries to stall a wedding that only Wild Eagle really wants, and enough gags for everyone to get in on.  The first season kicks into high gear with an installment that, on reappraisal, is the show's finest to date.  (**** out of four) 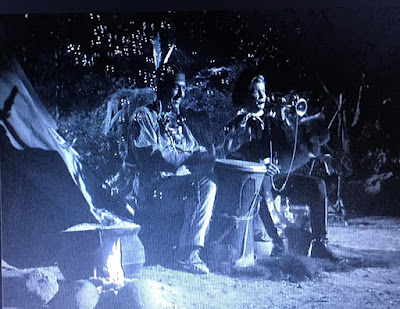 With Here Comes the Tribe, I've now reappraised all 16 segments from 1965: