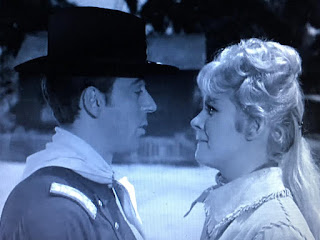 
Captain Parmenter witnesses the eviction of an already inebriated Charlie from the Fort Courage saloon before lunchtime, then has a clumsy altercation with a man he presumes to be a second drunk.  With a little prodding from family-minded Jane, the Captain resolves to issue a military order closing the saloon. 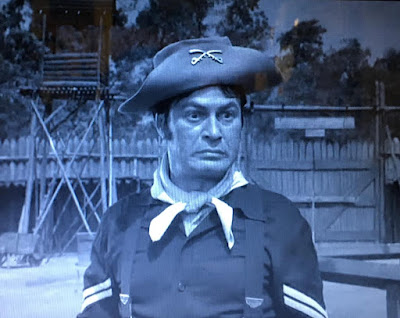 Changing Wilton's mind is a problem that O'Rourke and Agarn can handle, but the potential loss of their "Great White Pigeon" is a different matter altogether.  Parmenter has unknowingly run afoul of that second "drunk", who happens to be the menacing Sam Urp--self-proclaimed fastest gun in the West.  The ensuing demonstration of his abilities reveals that Urp isn't exaggerating, and he's also ambidextrous. 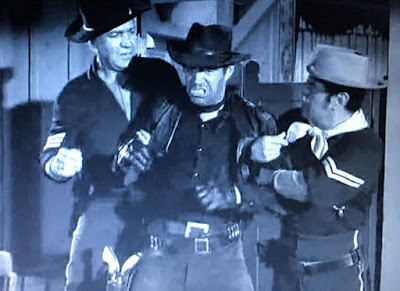 Six installments in, we get the first direct threat to O'Rourke's saloon, which would become a frequent target for hostile takeover (O'Rourke Vs. O'Reilly) and closure.  As demonstrated here, the latter menace was by far the easiest to repel with success merely requiring Parmenter's placation.  The transformation into Tinkerbell's Ice Cream Parlor convinces the Captain that "good old Pete" has cleaned the place up, with the ruse being dropped once "the old man" exits.  Sasparillas quickly turn into liquor, which might well make O'Rourke the first man to operate a speakeasy on American soil--the earliest known use of the word here was in 1889.

"There's only room for one Scourge of the West and that's me!"--Sam Urp 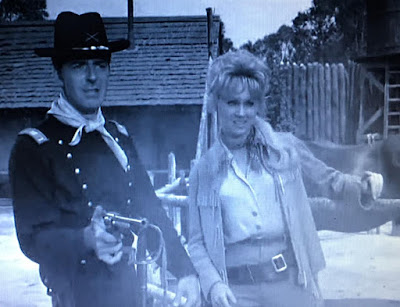 The second problem, however is far more worrisome, and not due to any affection for Parmenter as a person.  Protecting their Captain is essential only because breaking in a new C.O. would be a disastrous downgrade for O'Rourke Enterprises.  At this point in F TROOP's run Agarn still saves his tears for financial tragedies (i.e. errant cannonballs hitting the merchandise-filled NCO Club in Scourge of the West). 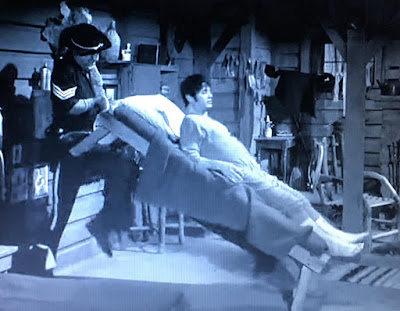 On the surface Dirge for the Scourge is one of the more innocuous early segments, but it's clear that series co-creators James and Jacobs envisioned an edgier show than BILKO had been.  Concern for the Captain's well-being was strictly business in season one, and O'Rourke's attempted interventions go beyond physically disabling Urp--kidnapping is just as acceptable as treason.   Yeah, F TROOP was always far slapstickier than BILKO, but the abundance of pratfalls masked a stealthy, healthy dose of cynicism that few shows outside of MAVERICK had demonstrated by 1965. 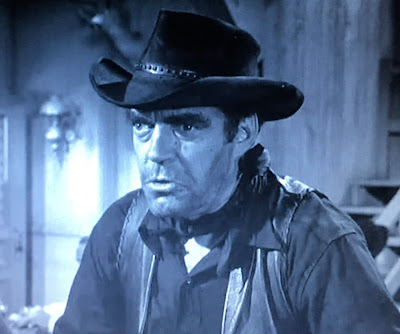 Fort Courage has a big name visitor for the second week in a row, with history being made in this case: veteran western tough guy Jack Elam makes the very first of what would be numerous sitcom appearances in Dirge for the Scourge.  Elam plays Urp completely straight, his intimidation palpable without exaggeration.  When we first meet Urp, he's scowling and loudly calling for a beer, but he scarcely raises his voice after, overawing with pistol prowess and an unnerving smile instead of articulation. 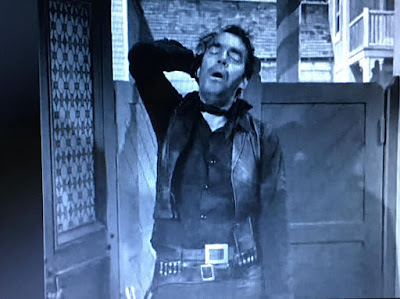 Elam's measured menace contrasts hilariously with Berry's obliviousness, providing a show not always known for understatement with some of its subtlest laughs of the season.  Within five years, Elam would be predominantly cast in comedic roles, but Dirge for the Scourge is one of his earliest and freshest: no hint of a twinkle in that lazy eye.  Urp is highly formidable with that shootin' iron, but in the words of non-Hekawi Lefty Gomez: it's better to be lucky than good. 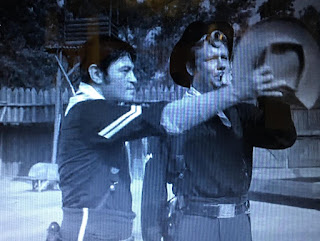 Goodwins also keeps a delicate touch with his visual wit.  The lookout tower remains intact for once, with pratfalls mostly avoided outside of Urp's constant struggle with the saloon's swinging doors.  In place of the usual raucousness, we get quieter silliness stemming from Parmenter's losing battle with uniforms (Duffy's, Duddleson's, his own) and the Captain's still shaky marksmanship.  Nevertheless few laughs are lost--if any.


Elam isn't the only noteworthy guest star: veteran stuntman Harvey Parry makes the first of three appearances as Charlie the Drunk.  Sixty-five years old at the time, Parry was still doing his own stunts, gracefully tumbling over a hitching rail and crashing through the saloon window.  (Yes, it's him--it's all done in one continuous shot.)  A genuine Hollywood legend who doubled for Harold Lloyd in SAFETY LAST in 1923, Parry kept at it for another twenty years after his F TROOP stint, completing work on BETTER OFF DEAD and JOHNNY DANGEROUSLY just before his death in 1985 at eighty-five. 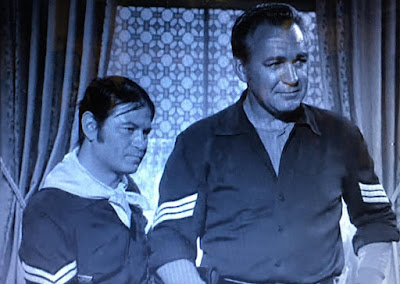 Benny Baker makes the first of five appearances as Pete, and Don Diamond is still credited as "Brave" despite being called Crazy Cat in Don't Look Now, One of our Cannon Missing earlier.  Dirge for the Scourge tied with CBS' GILLIGAN'S ISLAND for 22nd place in the Nielsens for the period ending October 24, 1965, with both scoring a 22.0 rating.  F TROOP led ABC to its only victorious night (Tuesday) and was the network's second highest rated show behind 15th place BEWITCHED.

The perpetually nervous Pete is compensated very handsomely by Fort Courage standards for bartending and the stress of posing as the saloon's owner: $8 a week.  Compare that to the $17 a month that O'Rourke receives from the Army, or the $15 and $8 monthly salaries of Agarn and Dobbs (The Phantom Major).  O'Rourke Enterprises pays well, no doubt.  Speaking of.... 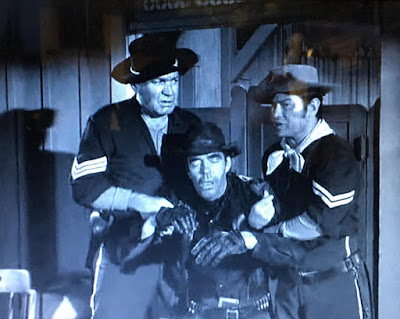 The saloon looks damned busy throughout, ice cream parlor or not.  Still, O'Rourke suffers some property damage from Urp's shooting (the chandelier), the Captain's trickery (a few beer mugs), and the overzealous ejection of town drunk Charlie (the front window), cutting into the profits. Would Agarn press charges for an accidental kidnapping by the Hekawis?  If not, O'Rourke's in the clear for the second week in a row. 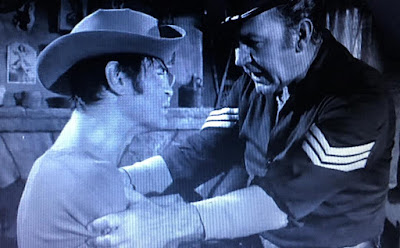 "Beaver cannot fly when horn of young buffalo point at full of moon."  This might well set the bar for the least coherent dose of native wisdom.

Little to offend in Dirge for the Scourge.  Nothing derogatory directed at the Hekawi, unless O'Rourke's attempt at a wise old saying gets your dander up.  And, as always Janie proves to be the best marksperson on the show--yes, including Urp. 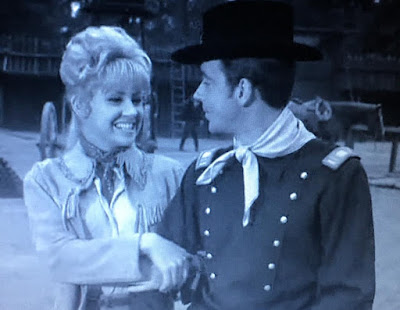 Thinly plotted but genial entry that isn't as silly as its two predecessors--at least, not until the decisive shot of the showdown.  Elam is an inspired visitor to the F Troop universe, playing Urp to perfection--it's easy to see here why comedy would become his forte in later years.  If Jacobs and James provide a surfeit of chuckles instead of the usual belly laughs this time, you won't complain, and their script is adeptly handled by Goodwins.  Even the laugh track seems subtler than before.  (*** out of four)
Posted by Hal at 6:00 PM

Jack Elam would actually headline a couple of short-lived sitcoms in the 70's, Hal.

"Struck by Lightning" might be better known more for Joe Cocker's "You Are So Beautiful" being used as a theme song than Elam playing the Monster of Frankenstein.

He also acted opposite Loni Anderson in "Easy Street" in the 80's. Yes, that also failed.

Very true hobbyfan. I remember TEXAS WHEELERS being rerun on HA! back in 1990, which would later fold into Comedy Central.