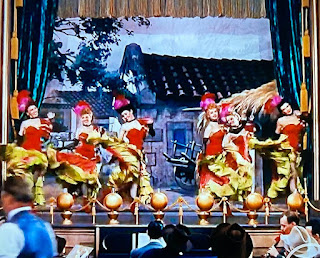 How quickly victory turns into defeat: Sergeant Morgan O'Rourke persuades military governor Captain Parmenter to allow "good old Pete" to have dancing girls in the saloon--then promptly loses said watering hole to con artist Dan Larsen.  How?  Larsen is his name and larceny is his game--and once he learned it is being leased to a soldier on active duty, "the rest was easy"! 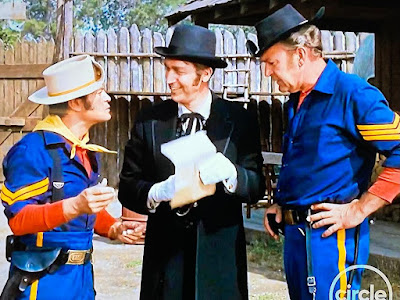 "Listen, Larsen!  Fort Courage has no room for blackmailers!"

You could argue that Fort Courage already has its crook in Sergeant's stripes, but no matter.  Larsen has all the whiskey he can use, but O'Rourke has an ace in the hole.  With no troopers, the new owner will be hurting for customers, so he deftly uses Wrangler Jane's opposition to this "undesirable element" to his advantage--resulting in some very unhappy soldiers under Parmenter's command. 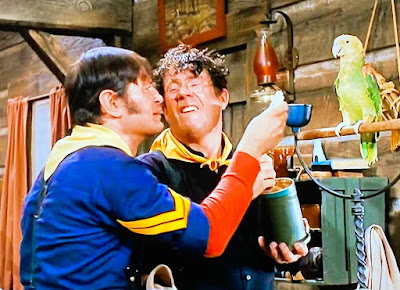 Arthur Julian re-works his first season classic O'Rourke vs. O'Reilly but comes up with an inferior version the second time around with Bring On the Dancing Girls.  While guest villain Peter Leeds obviously lacks Lee Meriwether's disarming beauty, his aptly named Larsen is appropriately smarmy and even more prepared to maximize profits--Hell, he doesn't even need the Hekawis, since he's instituting a cover charge and raising all prices.  This dapper Dan even has his own line of dancers at the ready, one-upping his adversary just as effectively as his more persuasive predecessor.  So the antagonist isn't the problem here--it's the enemy within. 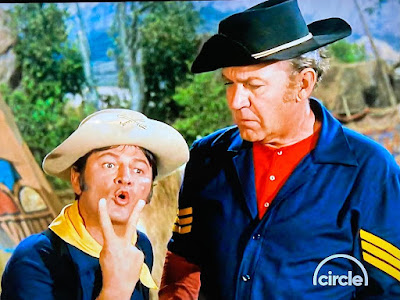 While Corporal Agarn is always O'Rourke Enterprises' weakest link, any role he plays in foiling a scheme is usually inadvertent, i.e. his casual admission to Derby Dan's daughter in The Ballot of Corporal Agarn or his greed-driven gullability in Play, Gypsy, Play.  Seeing Agarn folding like a sabotaged chair and consciously, even eagerly undermining his own financial interest here is more than a bit much.  Particularly when the non-coms both have an alternate slam dunk of an excuse for Parmenter's sudden order--Wrangler Jane's objection to the new entertainment! 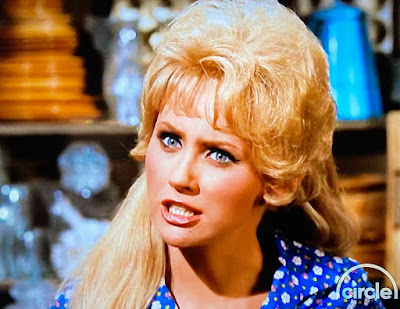 Diverting the troopers' wrath should be child's play, and the same conclusion--Parmenter realizing the negative effect this has on morale--would certainly still be reached in a much more faithful way to F TROOP's premise.  (Interestingly, Wilton doesn't get the silent treatment from Jane after rescinding it.)  Weakening money hungry Agarn's well-established loyalty to the cause in favor of unconvincing pathos doesn't work at all, coming across as lazy writing.  Or perhaps the opposite problem--Julian wrote over half of the color segments alone, and as the second season wore on, fatigue clearly showed with some of the series' weakest entries. 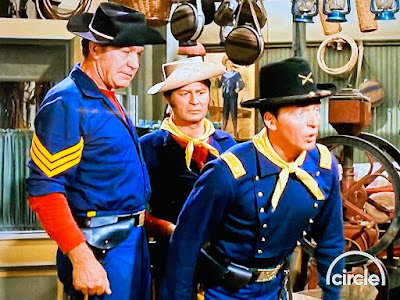 That said, Julian was thorough in researching the Can-Can's history.  It did indeed hit American shores in late 1867 (perfect timing for the show's universe) and was as scandalous as Wrangler Jane indicated.  It's use in the plot gives Ken Berry another opportunity to show off those dancing skills, and his deadpan responses to Jane's grievance show good development of their characters.  One step back, one step forward..... 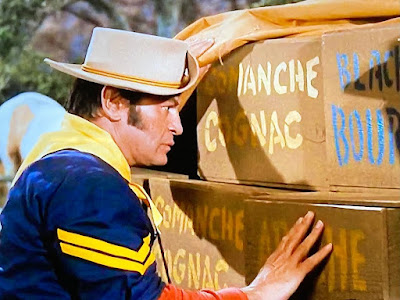 Larsen is surprisingly brazen about offering to sell some of his whiskey to the Hekawi right in front of O'Rourke and Agarn, since that has been spelled out in all Westerns (including this one) as a big no-no.  Given the precarity of his propriety, you'd think the saloon's new owner would be much more careful of running afoul of the Captain.  This seed is planted early as a potential downfall, but it's a red herring as O'Rourke's eventual restoration comes via more conventional means.  Suffice to say that Larsen should have made sure he had all the keys to the place. 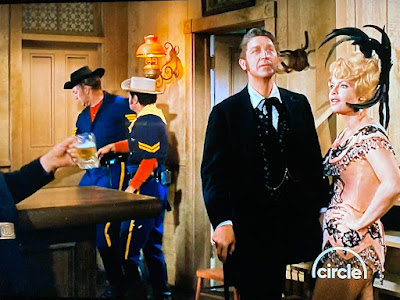 As was the case with Lily O'Reilly, Larsen enjoys a surge in business upon taking over.  In both cases, the enthusiasm is created by feminine beauty.  O'Rourke certainly noticed both times, but in the end even he isn't smooth enough to persuade Parmenter over the lovely lady that has the Captain's ear.  Man's biggest motivator of all?  Perhaps the Sarge really does need to take Lily O'Reilly up on her closing offer to run the place.  Maybe she could get those dancing girls in there for good, O'Rourke! 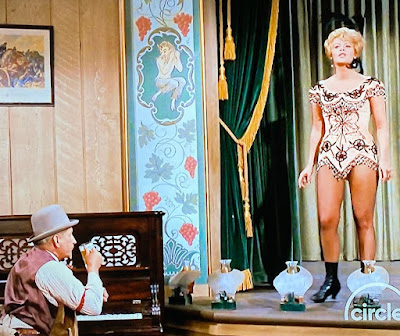 The only speaking part for one of the hoofers belongs to Pepper Curtis, whose erstwhile work as a stunt woman hints at why she was hired for what this role required.  Curtis, who had multiple appearances on PERRY MASON among her TV credits (which were apparently more numerous than iMDB lists) sadly died young at age 49 in 1982.  Leeds' obituaries indicated more than 8,000 TV appearances (FWIW, his iMDB page lists more credits than even Steele and Storch, 248) when he passed away in 1996. 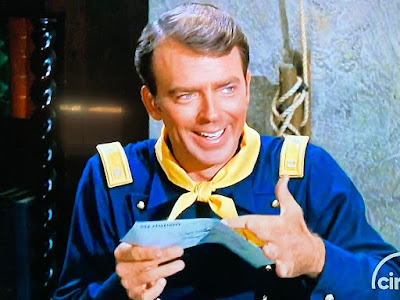 Things must have loosened up regarding the natives imbibing, since apparently the Hekawis are joined by pretty much every tribe in firewater production, judging from Larsen's inventory: Comanche Cognac, Shoshone Sherry, Blackfoot Bourbon--even Apache(!) Ale.  Speaking of---

None, but this episode is not without wisdom.  It seems pretty wise to leave the tribe's name off the liquor like Wild Eagle does--the other brands pretty much advertise their respective producers, no? 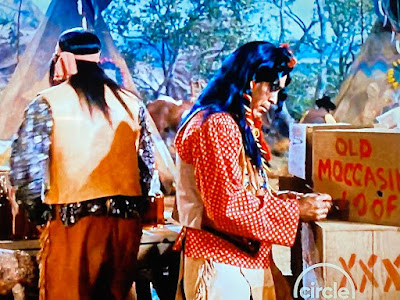 Pretty disastrous to lose the saloon, and then run up a considerable repair bill for "good old Pete" (unseen, as was the case throughout the second year) getting it back.

NUMBER OF TIMES O'ROURKE COULD HAVE BEEN TRIED FOR TREASON?

Dan Larsen gets uncomfortably close to O'Rourke's big secret when pulling his wagon through camp, but doesn't obtain proof that would hold water--or whiskey (though at Fort Courage's saloon, who can tell the difference?). 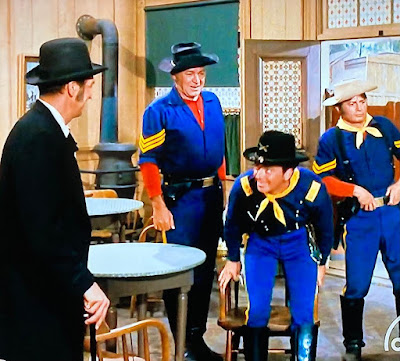 Good premise, good villain, but unsatisfying execution since Bring on the Dancing Girls unconvincingly undermines Agarn's character.  Middle of the pack installment that had the potential to be substantially better.  (**1/2 out of four)