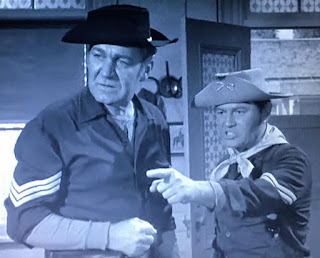 
How rotten has business been at the Fort Courage saloon?  The men are ordered to drink beer in formation during rest period (nickel a beer) and the price on the "free" lunch has been raised from a nickel to a dime.  Things may be bleak at the moment, but the Sarge sees a huge spike traffic coming when the Captain announces the pending arrival of his Uncle, Colonel Jupiter Parmenter.  The Colonel is tasked with providing safe passage for railroad workers through Indian territory, but visions of that first million for O'Rourke Enterprises fade once the elder member of Philadelphia's finest military family confirms that Fort Laramie is the intended destination for the expansion. 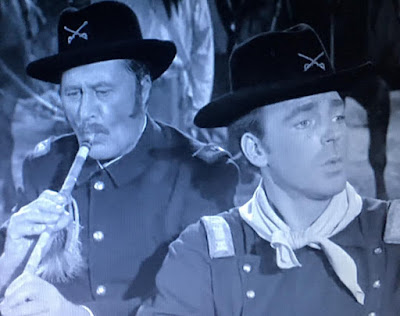 Proving that he can gaslight any Parmenter, O'Rourke persuades the Colonel that Fort Courage is the far less dangerous route, once the "ferocious" Hekawi are relocated.  Convincing Wild Eagle requires more than the planned nominal sum, but the Native leader finds a suitable new home for his Tribe: Fort Courage! 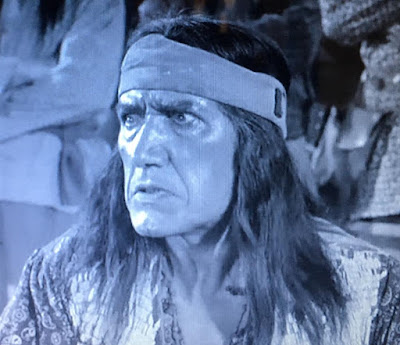 "First peace treaty ever to come with room and board!"

F TROOP brings the 1626 purchase of Manhattan Island in for yet another skewing in Iron Horse Go Home.  Both Parmenters believe that they're modern Minuets, but Jupiter is no more of a match for Wild Eagle than Wilton is for O'Rourke.  True, the Chief doesn't quite get his demand of $3,000 for the 600 acres, but he does get the Army to move from 4 cents an acre to fifty.  Who's screwing who?  Wild Eagle happily declares: "$300 for land that the Hekawi took from the Buffalo?  It could only happen in America!" 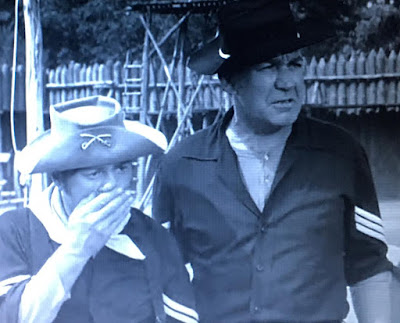 The nagging question that emerged in The 86 Proof Spring was the notion that three Hekawi braves could not only sneak into the fort at night, but could get into the locked NCO Club and take the bulky still out.  While I can't still can't figure out how they got inside the club, it's easy to see how they got past the first hurdle here: Vanderbilt remains on sentry duty, with what has to be his worst showing ever.  The Hekawis reconstruct their entire village inside Fort Courage, and he never sees a thing.  Worse, it happens in front of a visiting Colonel.  But we all know Parmenter is a second chance kinda guy: Vandy remains in the tower long after Iron Horse Go Home. 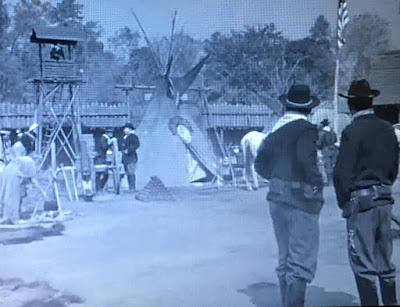 Seems foolish at first to think that O'Rourke's Hekawi business partner would jeopardize the titular train that could make them all rich.  Well, in this endlessly fascinating partnership, the Chief's scheme to milk more money out of the Sarge is one of his most savvy.  Just keep up his bluff in the face of bad chow and marching drills for a few days, and the profits for that ex-buffalo land could double or triple.  And then of course Wild Eagle goes right back to a greatly enhanced profit share from O'Rourke Enterprises with the troopers none the wiser.   Crazy Cat and Roaring Chicken are missing from his outing, but who needs them when the Chief is coming up with a doozy like this? 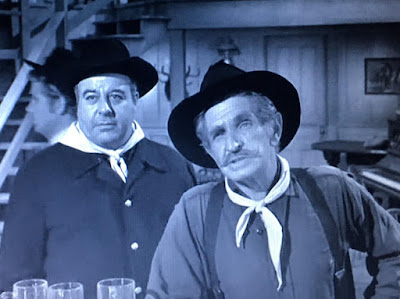 But if O'Rourke falls victim to unforeseen consequences in his quest for riches, so does the Chief: he didn't count on the Hekawi maidens spending so much money with at the general store.   Whether it's that or the Shugs' attack on the Fort that drives the newly formed "H" Troop back outside is a point to ponder.  Suffice to say that Wrangler Jane might have been the biggest beneficiary of this ostensible  relocation for the "public good". 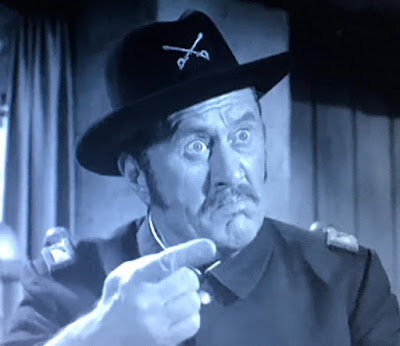 An uncredited Rod McGaughy was briefly glimpsed as Colonel Jupiter Parmenter in Scourge of the West, but the aristocratic Allyn Joslyn took over the role for Iron Horse Go Home.  He's subtly dismissive of his nephew's officer status at first, briefly impressed with him after the apparent success of the negotiations, and eventually as exasperated with him as he is of his regimen in the end.  A Pennsylvania native like his character, Joslyn could sputter and fume with the best of them, making him a great choice to play a visiting officer.  Sadly, this was Uncle Jupiter's only visit. 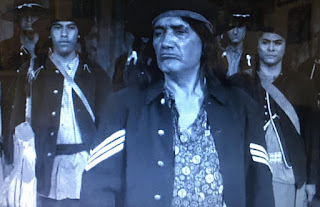 "Ah, the knuckleheads!  They knocked the tower down again!"

Series co-creators Ed James and Seaman Jacobs were responsible for some of the wildest moments of the first season, and also some of its guiltiest pleasures.  Simultaneously both here, but practically every insensitive line is eventually paid back, save for O'Rourke's comments on Vanderbilt.  Director Rondeau is careful to keep Joslyn (then in his mid-60's and nearing retirement) out of harm's way during the slapstickier moments of his inspection, and inventively lets us view the lookout tower's fall from outside Fort Courage for what was the first (and I believe, only) time. 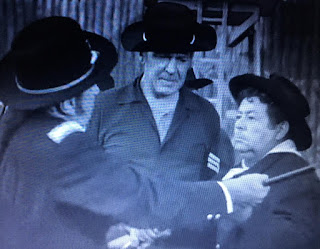 We also get a novel twist on the now-familiar fake Shug attack.  This time O'Rourke and Agarn stage it unassisted--at least that saves them about $20, which is Wild Eagle's usual going price.  Rondeau falters at presenting the two needed night scenes, however.  Fort Courage looks exactly the same at 4 A.M. as it does at noon, and no time difference is going to explain that. 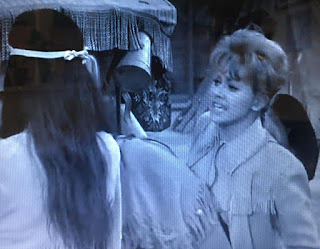 Iron Horse Go Home shows F TROOP in solid stride: minimal sentimentality, maximal selfishness, and money as the root of all motivation.  If not quite perfectly executed (those nocturnal scenes really needed accuracy) visually, the verbal wit is in peak form and the jokes never stop flying.  Most hit the bullseye. 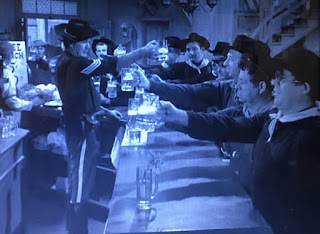 You heard the Sarge.  It's been awful at the saloon after that failed gold rush (Honest Injun) and Lily O'Reilly's attempted hostile takeover (O'Rourke vs. O'Reilly).  But, no harm no foul otherwise: Wild Eagle's payment came from the government, and O'Rourke successfully beat back the Chief's attempt to genially extort more from his business partner.  As for the Hekawi side, they got their $300 but incurred an undetermined amount of leakage to Wrangler Jane--an under the radar winner in barely thirty seconds' screen time.

Once.  It is astutely pointed out by Agarn that if they hit someone during the "private war" they start with a staged Indian attack, that dreaded charge would apply.  They come uncomfortably close with the initial treeful of arrows. 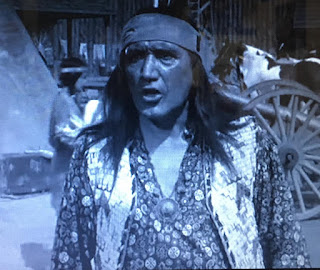 "When thorn of blackberry grow on rock, bullfrog sing like crow in winter."  The Corporal appreciates it at least, since he's a fan of bullfrogs.  Who knew?

Agarn's cringeworthy comment about the Hekawi being "the Vanishing Americans" opens Act II, but few can make a paleface pay like Wild Eagle can.  And he does it peacefully, episode after episode. 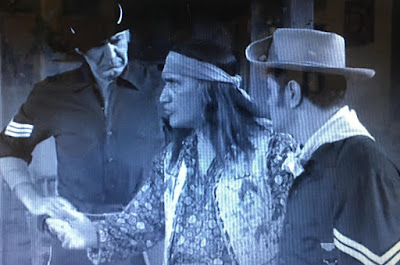 James, Jacobs and Rondeau were responsible for many of F TROOP's rowdiest moments, and all three were sorely missed in Season Two.  Iron Horse Go Home was the director's third winner in as many weeks.  While a few imperfections place it on the opening season's second tier, that's still a lofty place to be.  (***1/2 out of four)
Posted by Hal at 11:00 PM

This was crazy fun. Y'think they missed out on an opportunity to have Phil Silvers make an appearance? O'Rourke wouldn't have existed without Bilko, y'know.

You are so right, and Forrest Tucker readily acknowledged it. He told the cast to "think Bilko" while they were filming the pilot. Silvers appearing would have been great--they had their chances (i.e. the saloon got a hostile takeover twice). It was memorable when Tuck got to face off with John Dehner as a competing con artist; Silvers and Tucker in the same episode would have been golden.

This is just a bit off-topic:

A few days ago I went to my Old DVD Wall to take another look at Chamber Of Horrors, which had gotten a write-up at another blog.
As you might know, COH was an unsold pilot for a TV version of House Of Wax, which Warner Bros TV made for ABC for the fall of '66.
When ABC announced their fall schedule, sometime around March, House Of Wax was supposed to get Friday night at 10 Eastern/9 Central time.
There was an executive shake-up at ABC, and an ad guy was allowed to rearrange the schedule according to his whim - and House Of Wax was dropped cold (along with several other shows).
Warners told the producer of HOW to turn the pilot into a theatrical feature, which became COH.
Oh yes, that producer, who also directed the House/Chamber pilot -
- that was Hy Averback.
Consider for a second:
Had House Of Wax made the ABC fall slate in '66, Hy Averback would have had two shows on the network - every producer's dream (that season, Irwin Allen would have two shows, and Bill Dozier would have three (OK, one of Dozier's was The Tammy Grimes Show, but it still counts)).
Of course, there's the fact that ABC's overall fall slate came a noticeable cropper - which makes dropping F Troop stand out even more as the kind of blunder ABC often seemed to make back then.
All these years afterwards, it is something to think about …


By the way, I looked at the other F Troop entries.
Were you aware that Wm. T. Orr was Jack L. Warner's son-in-law?
I guess that Orr's getting forced out in the wake of the Seven Arts merger (after heading up Warners's TV operation for over a decade) was just one of those coincidences …

Mike: Thanks for reading and for the insight. I knew about the renewal of TWELVE O'CLOCK HIGH pushing HOUSE OF WAX out at the last minute; thanks for the backstory.

Orr was actually forced out as head of Warner Brothers Television halfway through the 1965-66 season, and you'll notice that his name stops appearing in the closing credits as Executive Producer after the 17th episode, "Our Hero, What's His Name?" which aired one week after "Iron Horse Go Home" (1/4/66). A real shame because that made Benny Kalmenson, who HATED television, the head of the department. Even before the Seven Arts merger that followed in late 1966, it appears that Warner Television was being allowed to wither and die. A real shame because F TROOP deserved full support, and never dipped below a 31 share which was golden in those days.

I went into some of the behind the scenes politics involved in my post for "The Day The Indians Won". Averback was named producer over series creators Ed James and Seaman Jacobs, and Jacobs wasn't happy about it. He noted that Averback had helmed three shows prior to F TROOP and none made it to a second season.

Orr had a lot to say about the studio's errors when he was interviewed for THE BOX years later. It's too bad that Jack Warner was either losing power at that time due to age and illness or that he failed to listen to his son-in-law. Orr was right IMO. The death of F TROOP was more a Warner Brothers blunder than anything; Kalmenson wanted the quick money from syndication, but who knows how much he cost WB in the long run by not having 100 episodes of F TROOP, which they would have been close to with a third season.