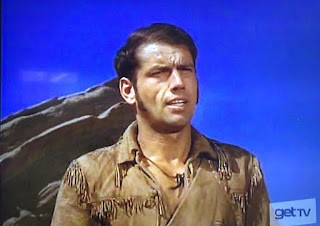 Introduction to the HONDO episode guide and series overview is at this link.

In his latest assignment from Colonel Crook, Hondo Lane is sent to negotiate the sale of needed horses with untrusting Chief Neomo.  With soldiers disallowed from crossing into Mexico, the trusted scout is sent to the Val Verde way station on the border, where he bides his time playing poker while awaiting Captain Richards' arrival.  After winning a big pot with trip Queens, Hondo bags the winning in his trusted Rebel hat--and promptly gets robbed by Carlos Hernandez, who needs $100 protection money. 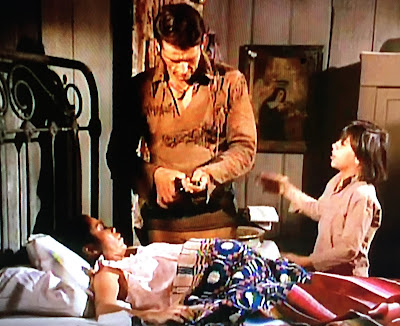 The security is not needed from Neomo (the Apaches water their horses on Carlo's land) but from half-breed Diablo, who has threatened to burn the expectant father's house down.  Seeming much more concerned about the loss of his beloved hat than his poker take, Hondo reluctantly sets off on his official mission with an eye on his personal one.  After a marginally fruitful powwow with the Chief, Hondo finds Hernandez' home--with the man of the house away and his laboring spouse in immediate need of a midwife. 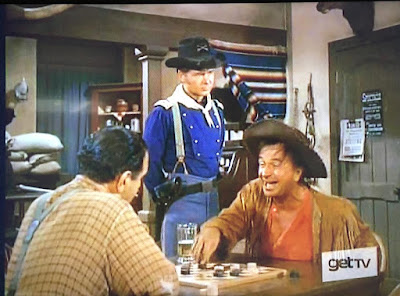 Spending much of his prime time finale unprotected from the desert sun, Hondo Lane is arguably more put-upon than ever before.  After losing his gold and favorite headgear at gunpoint, he faces two attempted heists of his horse, has liquor mooched by Buffalo (no surprise there) and Chief Neomo, then is finally forced into a crash course in obstetrics.  Truculent and reluctant, Lane disavows altruism.  His birthing ability might be chalked up to a man rising above himself in a pressure situation, but that farfetched cure of infant shock at the climax is a bit much, just one of several times the script by Max Hodge (creator of Mr. Freeze for BATMAN) misses the mark. 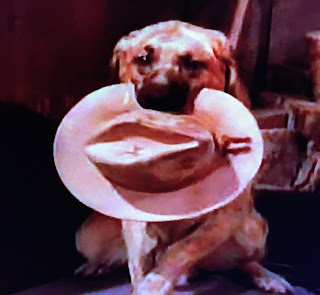 Hondo and the Rebel Hat repeats the unusual structure from Hondo and the Gladiators, with nearly ten minutes of action before the opening credits roll.  That installment gave us a memorably vicious Claude Akins and an intense search for the kidnapped Sam.  This time around, the stakes are much lower--the audience simply can't have much of an investment in the pursuit of a "beat up old rebel hat".  Especially in comparison to a frantic race against time to save Sam from a brutal pit fight.  The lengthy teaser sets that tone, and if it feels padded, it is--with somewhat awkwardly fitting footage previously seen in Hondo and the War Cry.  A fitting introduction to a segment too slight and sluggish to really score. 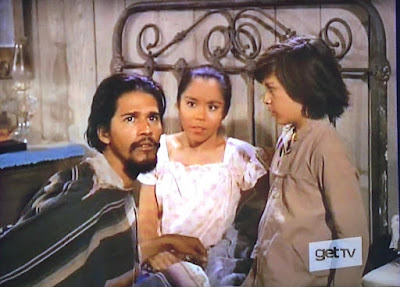 With Diablo and Neomo, we get two antagonists for the price of one.  The setup gives Lane the opportunity to divide and conquer by playing them against one another to his benefit.  Unfortunately more is less here: the double dose of villainy ends up with neither nearing the menace of Brock, Colonel Spinner or the Apache Kid in the preceding installments.  Jack Elam's Diablo is the more imposing of the two for a while, ruthlessly taking protection money and forcing the poor into criminal activities to get it.  But the miraculous survival of the newborn not only turns our biggest threat into a pussycat, it resolves all conflicts--hard bargainer Neomo is suddenly ready to sell his (most likely stolen) horses! 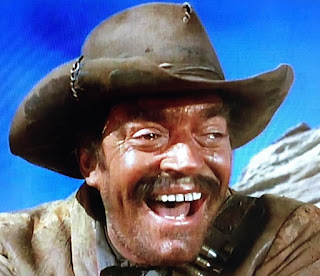 Hondo's ambiguity regarding his Civil War days is as evident than ever--Richards is the only one to point out that his prized loss is a Rebel hat.  It seems to be something only brought up by "blue bellied" officers, as General Rutledge and Colonel Smith had similar derision in earlier episodes.  Of course, Buffalo seizes the opportunity to troll the Captain about the hat once Hondo is out of earshot. 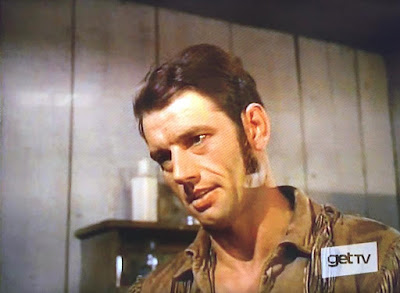 Dominican character actor Rafael Campos followed up his BLACKBOARD JUNGLE breakthrough with three decades of steady TV work.  He was only 49 when he died of cancer in 1985.  Linda Dangcil had just landed her signature TV role on THE FLYING NUN.  Eugene Iglesias is still with us at 94, but this would prove to be one of his final TV roles. 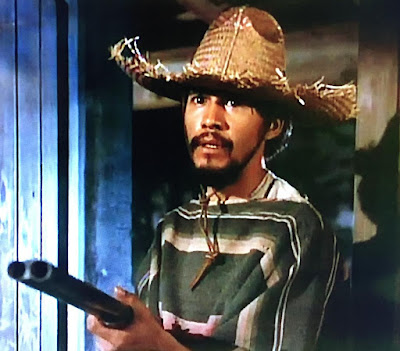 While Hondo and the Rebel Hat might have been a valley creatively, this swan song produced the show's peak in the Nielsen ratings, continuing several weeks of positive momentum by posting a 16.1 rating/27.3 share on December 29, 1967.  Numbers that certainly would have produced a full season order two months later, but it was too little, too late: HONDO disappeared from screens until its June 1989 resurrection as a Saturday morning perennial on TNT. 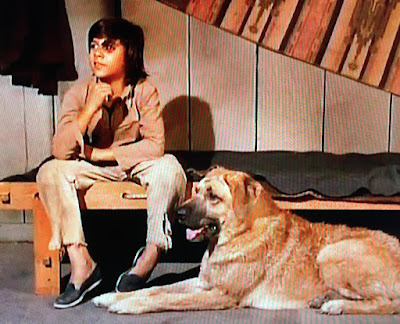 Lane dispatches two of Neomo's braves after they fail to steal his horse.  It's the only skirmish in this almost fight-free installment.

With the action moved out of Fort Lowell, the only watering hole in any danger is the one in Val Verde, which stays unscathed as Hernandez' robbery goes smoothly for the rookie criminal. 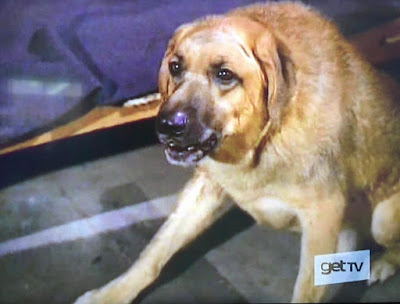 Sam closes out the show's run in fine style.  First he alerts Hondo to the presence of the would-be horse thieves.  He later locates that battered old hat/water dish after every human fails.  Even the taciturn Hondo has to admit: "no hat ever smelled out a waterhole".

Max Hodge's script has a few nice character points, but ultimately ends an impressive streak of hurtling installments that took Hondo and Buffalo away from Fort Lowell.  Despite typically fine production values and more agitation for its hero than usual, Hondo and the Rebel Hat lacks the intensity of its four predecessors: padded, sometimes cheesy, and even plodding in the middle.  An unsatisfying wrapup to a memorable, way too brief ABC run.  (** out of four)

HONDO airs every Saturday and Sunday morning at 10:15 A.M. Central time on getTV, the show's home since September 2015.