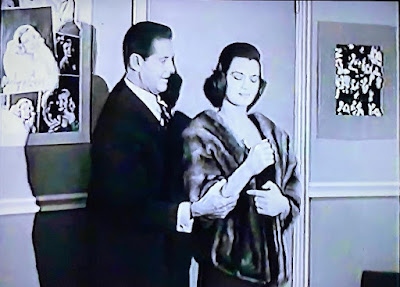 Series overview for LOVE THAT BOB a.k.a. THE BOB CUMMINGS SHOW is at this link.

The MacDonalds have been cost cutting to allow Uncle Bob to automate his business via the IBM 101 Electronic Statistical Machine.  Chuck's allowance has been cut and Margaret has been fixing wieners and sauerkraut almost nightly to help pay for the data machine.  Or is that date machine?  Turns out  Bob has done away with his not-so-little black book and is using the sorter instead.

MARGARET: "One of the smallest!" 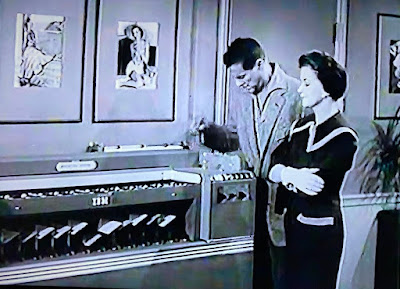 Needless to say, the family members aren't exactly thrilled with the result of their recent austerity.  "Stockholder" Margaret decides to turn the tables by crashing Bob's next appointment: 5'5", 118 lb. Millie Davis, who loves the music of Tchaikovsky and the poetry of Browning.  But how does the lobster loving brunette feel about Margaret's latest kitchen specialty? 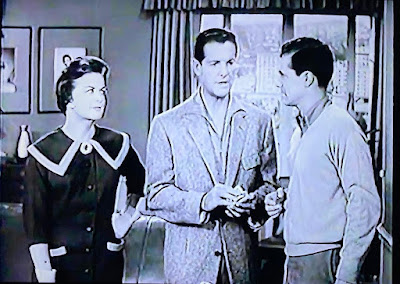 The most unjustly overlooked series of the 1950's to these eyes, LOVE THAT BOB has a little extra spice compared to its key competitor in edginess, BILKO.  And I'm not just talking about the constant topic of sex, but also the success ratio of its lead while pursuing his less than altruistic goals.  We all knew Bilko would never get rich, but Bob does get laid.  Often.  Look no further than the following week's Bob Gives S.R.O. Performance for a textbook example of Bob's eventual carnal satisfaction resulting in a hilarious episode.  But BOB had this in common with Bilko and Ralph Kramden: it was also side-splittingly funny when he crashed and burned, and Bob and Automation joins Bob Batches It in giving us a classic example. 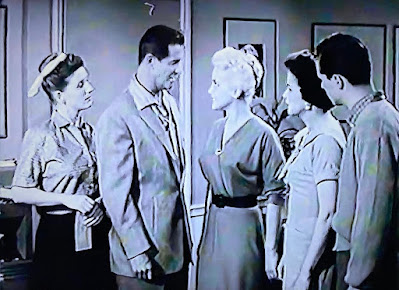 Not that Bob doesn't deserve his just deserts.  In his favor, Collins provides for his widowed sister and nephew--helping put Chuck through medical school at that.  But our Playboy practiced to deceive when implying his use of the unit was all business.   And the family stabilizing Bob's home life gets belt-tightening while the objects of Bob's desire get the likes of vichyssoise, cherries jubilee, the aforementioned Maine lobster and expensive wine.  (At least, treats intended for Millie.)  The IBM's true purpose is only revealed by a surprise visit to the office, so our Lothario is trying to get away with it in text as well as subtext this time.  And oh, boy, does he pay... 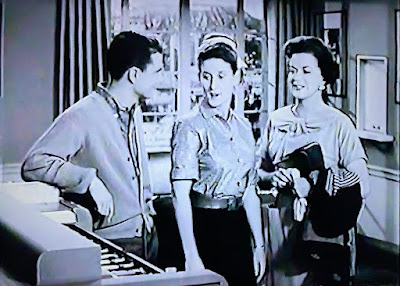 MARGARET: "The F.B.I. has to keep very detailed files!"

SCHULTZY: "The F.B.I. could take lessons."

Bob is in full-fledged stinker mode again, but it's hard not to admire his attention to detail in pinpointing every single "weakness" for the ladies in his life.  Milly and Janice are both new models to us, and he hasn't called the former in months, but she certainly left an impression to leave such detailed data in his mind.  Bob probably wasn't B.S.'ing when he told her that, anyway. 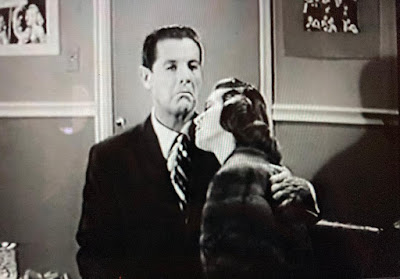 Alas, that well oiled chain our shutterbug put together is only as strong as its weakest link, and Schultzy lets the cat out of the bag before a single minute has passed.  Highly motivated to rein in her mendacious brother, Margaret upsets the bowl of cherries (jubilee) with more gusto than usual and Bob can't even rely on Chuck's hero worship after hurting his nephew's pocketbook in the process of obtaining that dream machine. 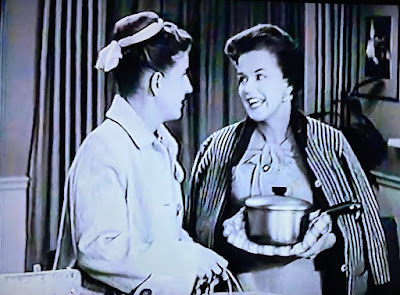 Speaking of, the Electrical Statistical Machine is never blatantly identified (in 1958, you had to be a paying sponsor to get that during the show), but despite the lack of name checks in the script, IBM still gets some free publicity: its logo is clearly readable on the sorter in multiple shots.  With three scenes, the device is on camera often. 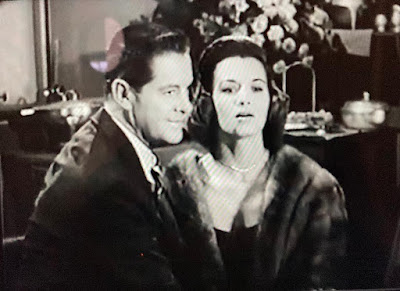 MILLY: "Why haven't you called me, Bob?"

BOB: "But my heart has, a thousand times!"

Returning to the series after Bob Traps a Wolf, Angie Dickinson deservedly gets this episode's slow burning centerpiece--a date with Bob inside his studio ("I want you all to myself") that takes eleven screen minutes to reach a payoff that proves to be worth the wait.  Her Milly Davis is a literal smoker (surprised Winston didn't get an extra plus in the dialogue) who inspires the painstaking specificity to get back in her good graces.  Angie was interestingly brunette in both BOBs. 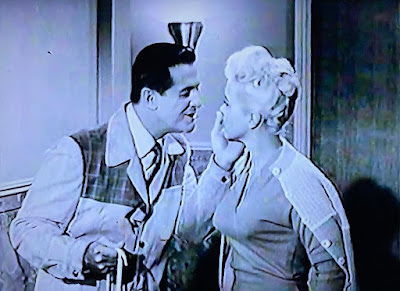 While the future POLICE WOMAN is far more recognizable to 2021 eyes, the other object of Bob's desire was likely more notable in 1958.  KEN MURRAY SHOW icon Laurie Anders ("I like the wiiide open spayces!") came out of retirement at 35 to play Janice Tuttle, her first role since the Murray-produced vehicle THE MARSHAL'S DAUGHTER (her only film).  The curvy blonde is just as sexy and more expressive than in her deadpan MURRAY appearances.  Her many talents included dancing, martial arts, and jujitsu, but acting wasn't high on that list.  She's very funny here though, and returned in the season finale, Bob's Forgotten Fiancee.  Score another one for director Cummings, who simmers this imaginatively structured script to a satisfying boil. 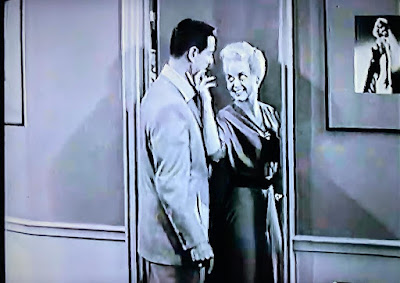 Given her own desires, I'm not fully convinced that Schultzy's slip of the lip was intentional.  She certainly joined Margaret in putting a cold shower on Bob's aspirations with Milly.  The following night was a family affair, with Chuck joining his mother in creating a literal office full of obstacles to jar Janice away from him.  Summing it up: the only women Bob got tipsy turned out to be his sister and his secretary. 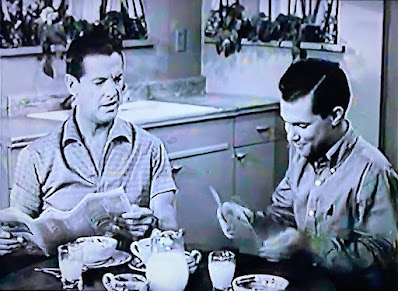 Two very large, excruciating strikeouts for The King this time.  Can't win 'em all, and since neither Milly nor Janice ever returned to the studio, Collins was denied another at bat by both.  (Incidentally, Janice Tuttle would also be the name of The Ravishing Realtor played by Elena Verdugo the following season, so the moniker had to be some kind of in-joke with Henning.) 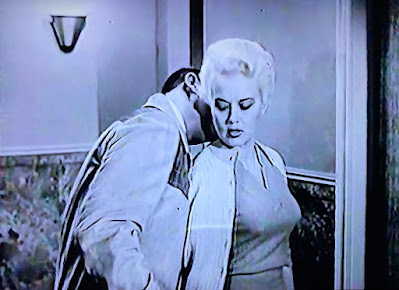 There's a few, but Margaret gets the best one early, the aforementioned exchange concerning Bob's status as a small businessman.  He could take that one more than one way, ya know.

Speaking of suggestive, check out these downright orgasmic looks from our leading ladies while they're in the presence.  Was director Cummings as sneaky as his onscreen alter ego or what? 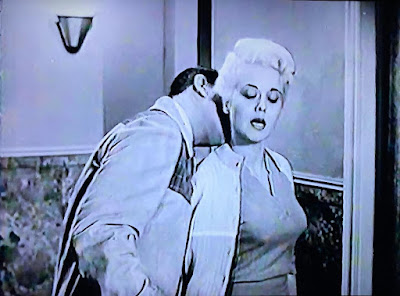 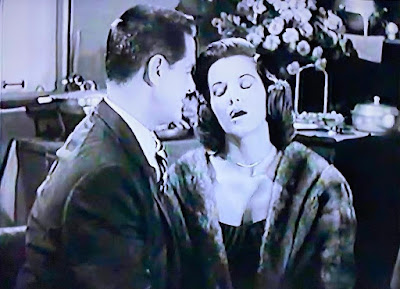 Riotously funny from beginning to end, proving that LOVE THAT BOB could follow the conventional path of its fellow sitcoms while still providing decidedly adult content for its era with the laughs.  We pretty much know the punchline, and the journey to it is tremendous fun.  Dickinson and the sadly forgotten Anders are on hand to provide us guys with a real eyeful, another bonus.  Quintessential installment of a classic at its peak.  (**** out of four)

If you'd like to check out Bob and Automation for yourself, here you go, syndication circa 1989 (but with no minutes cut and KXTX commercials intact):