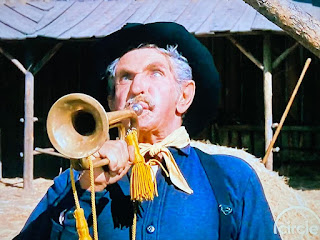 The latest visiting officer to inspect Fort Courage is Colonel William Bartlett, a.k.a. "Bugle Bill", whose reputation precedes him.  After a harrowing experience in the field years before, Bartlett's M.O. is to judge an entire Fort solely on the quality of its Bugler.  Unfortunately for F Troop and O'Rourke Enterprises, Fort Courage's man on the horn is one Private Hannibal Shirley Dobbs. 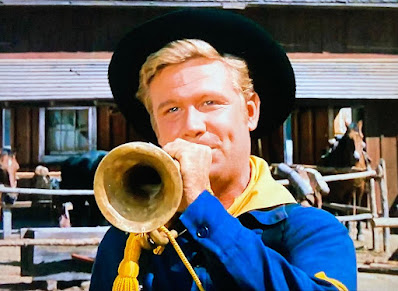 To keep "Bugle Bill" from hanging around for months poking his nose into everything at the fort (i.e. the stash at the NCO club), O'Rourke and Agarn implore Dobbs to practice incessantly while simultaneously searching the limited talent pool for a temporary replacement.  The unceasing horn wreaks havoc on everyone's sanity and, perhaps even more damaging, the bugler's confidence--misplaced as it is. 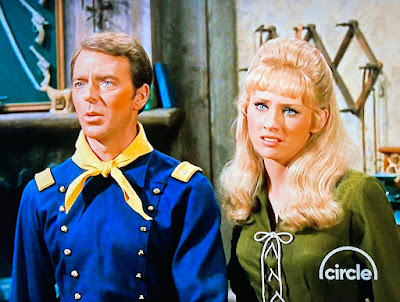 Longtime JACK BENNY PROGRAM scribes Goldman and Gordon return for a second season encore that turns out to be a notable improvement on A Gift From the Chief.  While the writers had a firm grip on F TROOP's characters immediately, that first effort lacked the show's usual zip.  For Whom the Bugle Tolls shares a conventional premise and predictably gives us plenty of the time tested Dreadful Musician trope. 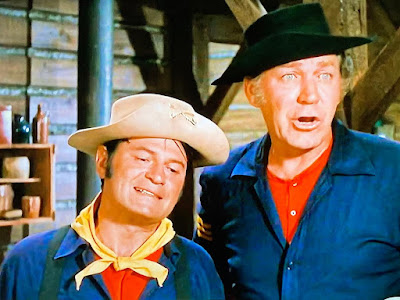 Maybe too much of it, since you might be as ready to scream like Agarn by the end of the first Act, but there's enough clever variations (i.e. Dobbs shifting to "taps" after he swats a fly) to keep this montage from getting too tedious.  Even better is the way secondary characters are highlighted: Duffy shows us why he wasn't chosen bugler, Vanderbilt bemoans the constant loss of glasses to the flimsy lookout tower, and Crazy Cat plays a key role in the resolution.  Each represents a nice change of pace from Alamo stories, wishing for the Chief's demise and the pratfalls of 20/900 vision. 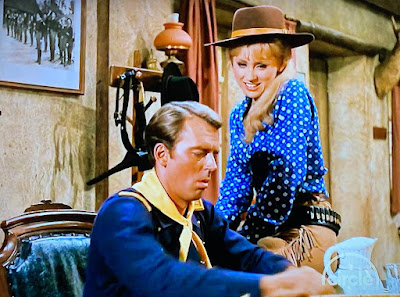 F TROOP had no shortage of dyspeptic character actors to play visiting I.G.'s, and Andrew Duggan, James Gregory and Fred Clark are joined in the club by a mustachioed Richard X. Slattery (BLACK EYE) in For Whom the Bugle Tolls.  Slattery gets less screen time than his cohorts and turns out to be more sentimental than any of them when all is said and done, but doling him out in two small doses keeps the Colonel looming menacingly over the proceedings. 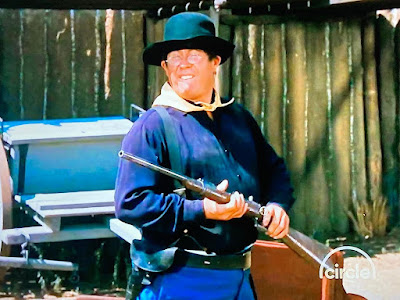 Despite the necessitation of army routine taking the spotlight from business this time, a fine grasp is shown of O'Rourke Enterprises as well.  The two principals have brisk souvenir sales going and the NCO Club is well stocked with Old Moccasin, two reasons that Bartlett's visit is dreaded.  Wild Eagle cannily scrapes ten dollars away from O'Rourke on a "sure thing", but one can't help but notice the Sarge holding his money roll close to his vest while counting it out for the Chief, who earlier hinted that payment was late on some of the merchandise. 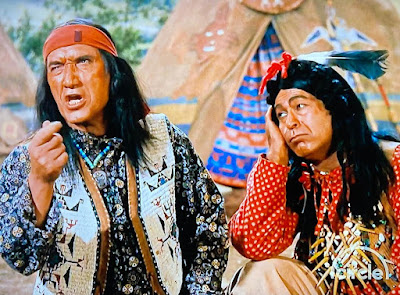 For once, it is Crazy Cat who is the primary beneficiary of the soldiers' desperation, though I'm sure he was required to split his take with his superior later.  For Whom the Bugle Tolls is too slight to be a bona fide classic but showcasing virtually all of F TROOP's supporting characters in sometimes surprising ways adds up to a stimulating viewing experience.  The sophomore season had its disappointments, but this isn't one of them. 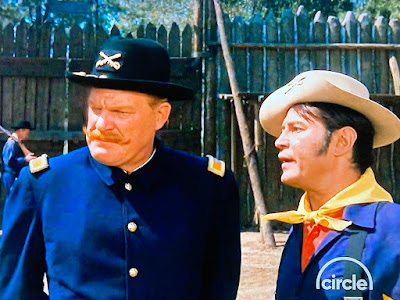 Once, if Bugle Bill had just waited long enough to see the real source of that "hauntingly, touchingly beautiful" retreat. 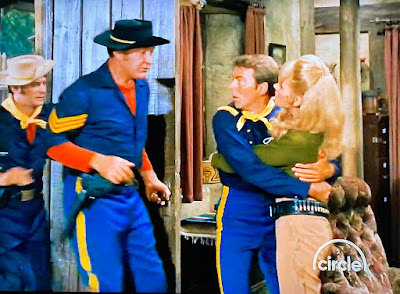 Not really, though the Chief is philosophical about getting half of his reward money: "Win a little, lose a little".  Makes too much sense to be formal wisdom from this source. 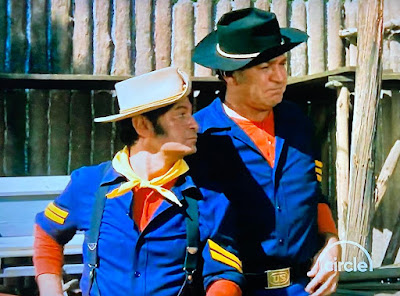 The Hekawis save the day, with peace and (rare for any music on F TROOP) harmony.  Also nary a perjorative term. 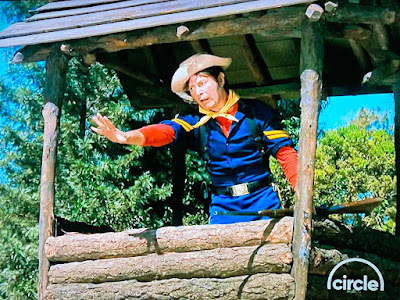 Upon further review, I gave this one short shrift in my original review of the Season Two DVD.  Goldman and Gordon had a great bead on Fort Courage's characters and provided variance on the show's running gags.  These new wrinkles make For Whom the Bugle Tolls a sneaky success.  One wishes that the former BENNY writers had had more than one assignment per season.  (*** out of four)

After F-Troop, Don Diamond (Crazy Cat) took up doing cartoons. His voice credits include the Tijuana Toads for DePatie-Freleng. I wonder if he had the same agent as Larry Storch, who was already acquainted with Friz Freleng.....

Thanks for reading! I don't think he and Storch ever shared an agent to my knowledge, but Diamond, like Storch, had talents well suited to voice roles.