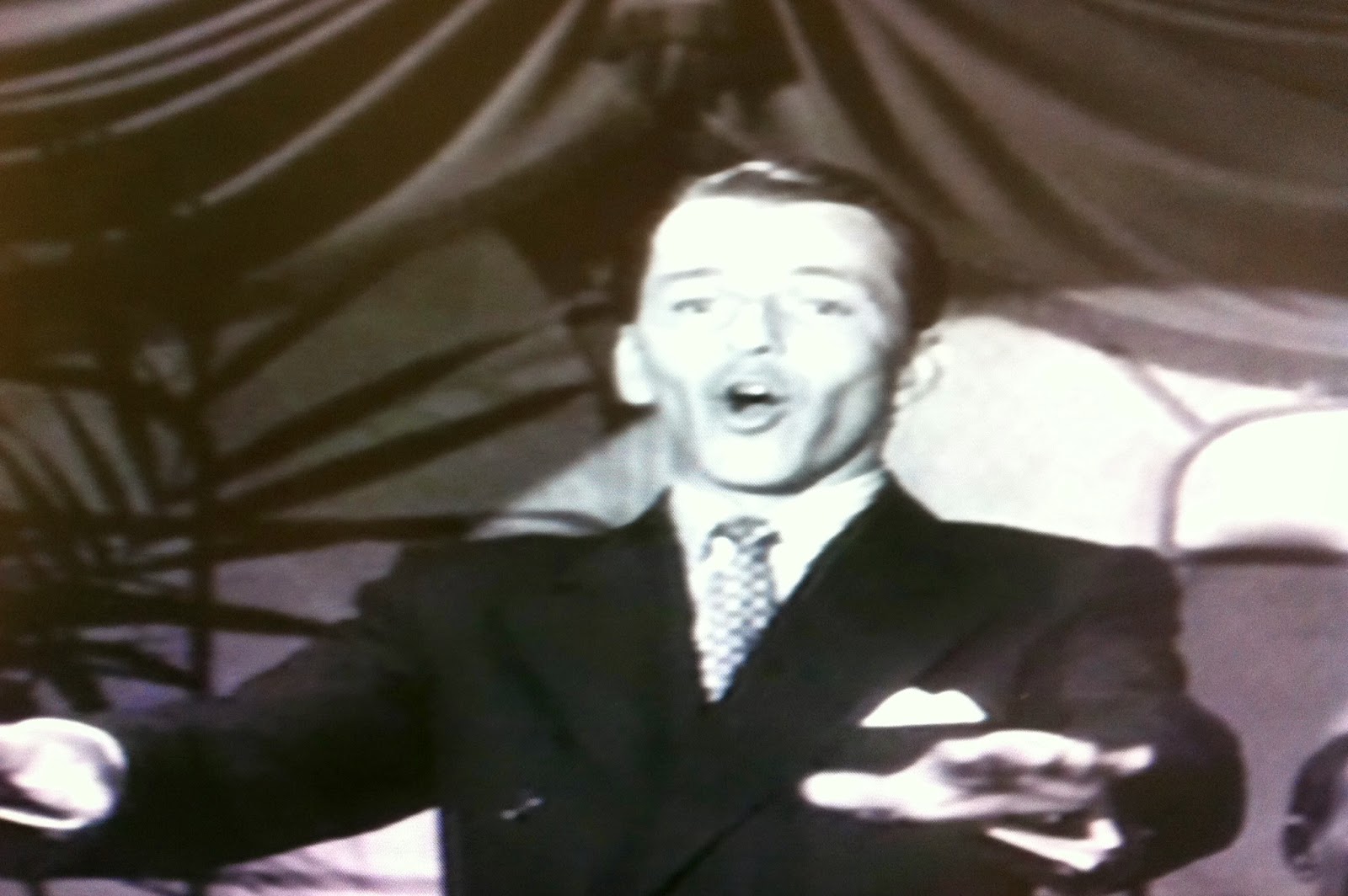 
Chicago, late 1920's.  Up and coming singer Sinatra (as Joe E. Lewis) decides to leave mobster de Corsia's nightclub for a rival with better showbiz connections, despite ominous threats from the employer.  Ignoring the warnings, Sinatra leaves anyway, taking piano player Albert with him.  Unfortunately, those threats weren't idle--three of de Corsia's goons ambush Sinatra, slicing his tongue and larynx, fracturing his skull and leaving him for dead.  Miraculously Sinatra survives, but is forced to relearn how to speak, and once he does, he discovers his old singing voice is gone. 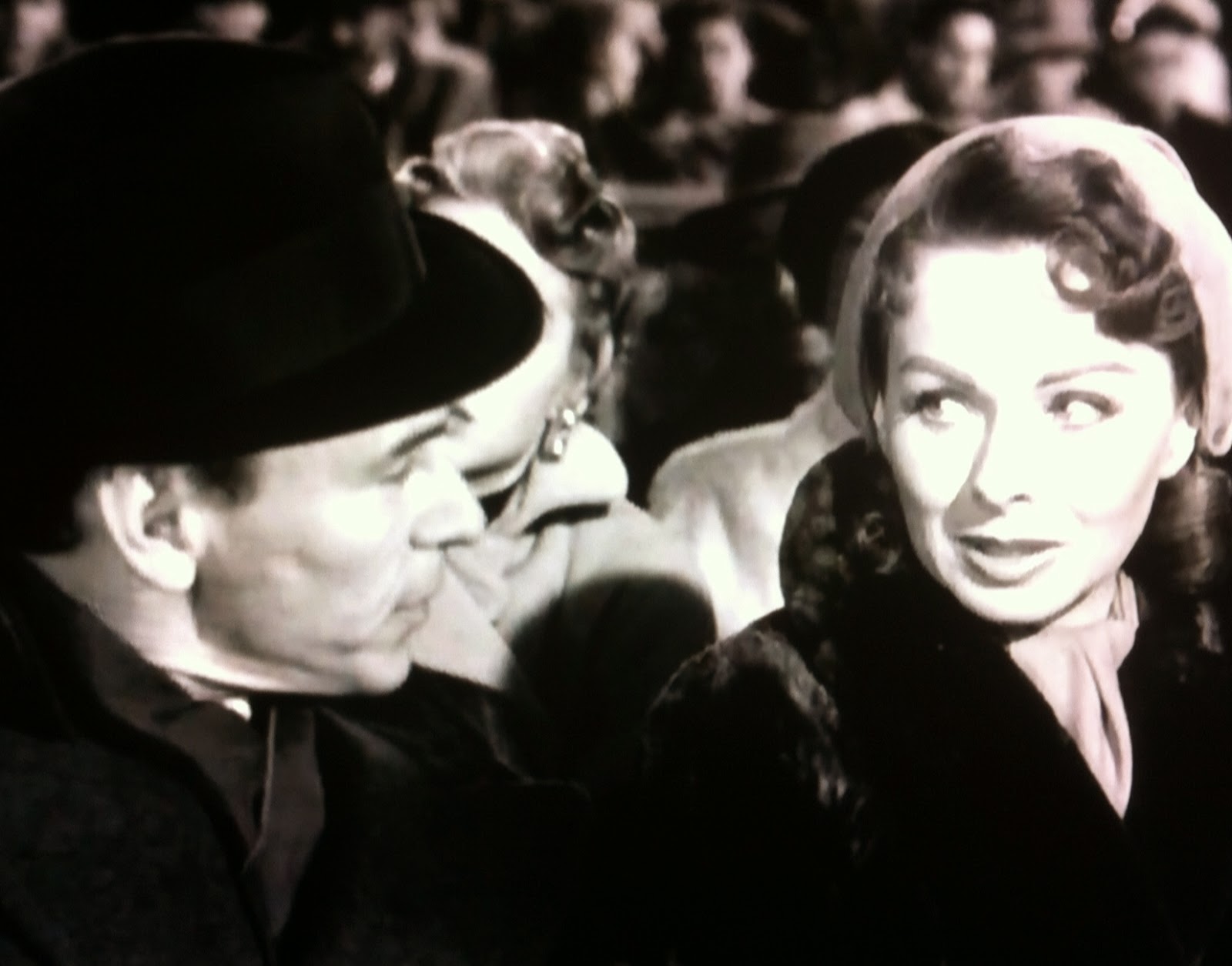 After a depressed Sinatra quietly skips town, he resurfaces in New York as a burlesque clown.  Loyal Albert tracks him down and sets up a charity gig with Tucker (playing herself), which leads to a second wind professionally.  Forced to improvise, Sinatra finds his groove as a sharp tongued, blase comic, albeit one fueled by liquor dependency and the emotional scars from attempted murder.  Sinatra succeeds onstage, but the traumatic experience continues to haunt him.  Self-depreciating jokes during performance become defense mechanisms everywhere else, causing numerous problems for Frank and those closest to him. 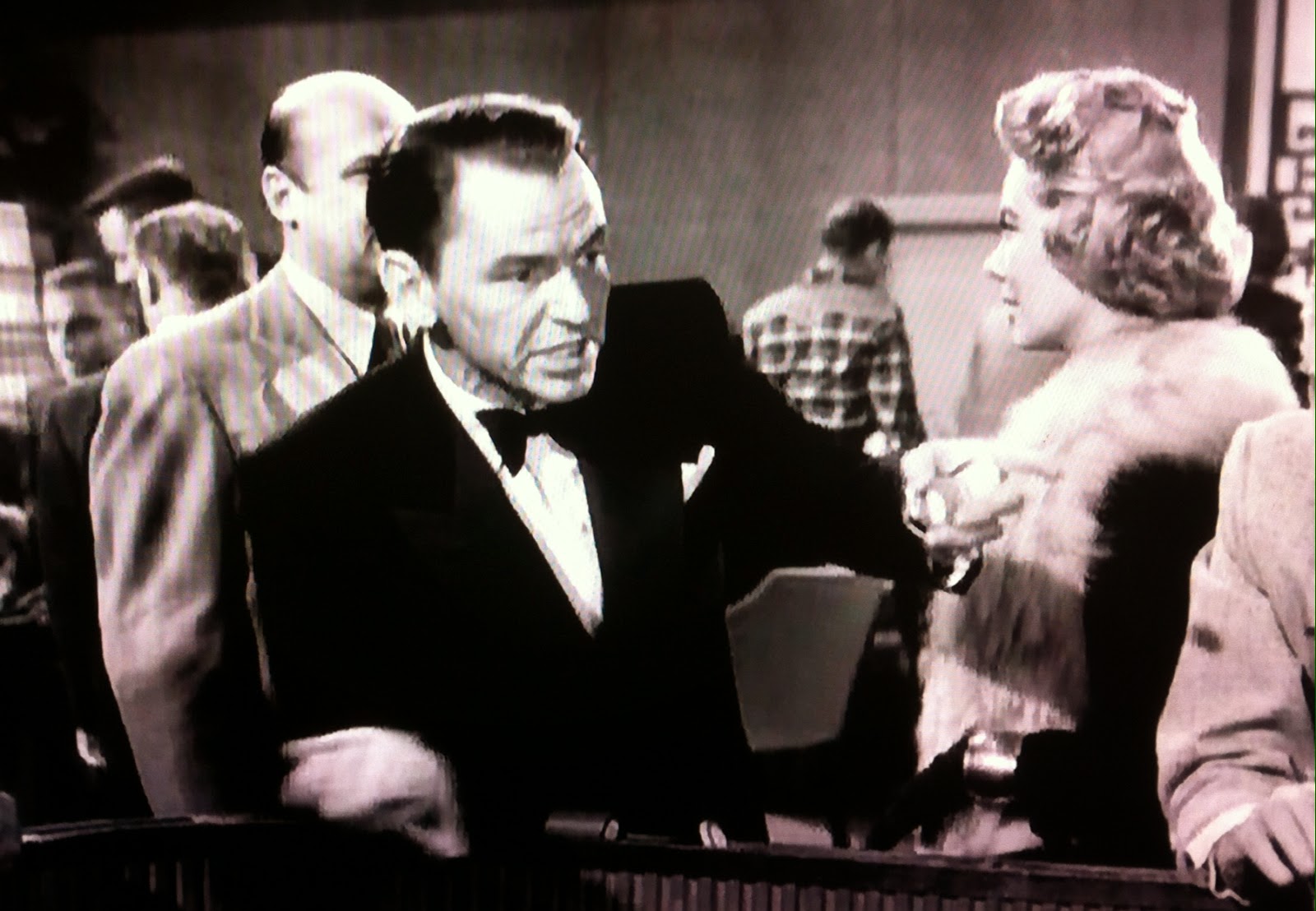 As is almost always the case in film bios, a number of liberties were taken with Joe E. Lewis' life.  To name two: Lewis' comedic skills were part of his act from the beginning, and he resumed his club career in the same capacity (without a detour into humiliating slapstick) after a grueling multiyear recovery.  But Lewis himself okayed the changes, and he clearly didn't turn this into a vanity project, since plenty of fissures in his character are portrayed unflinchingly.  Lewis is shown to be at fault for his failed marriage with actress Martha Stewart (Gaynor) and for an equally ill-fated romance with a society girl (Crain). 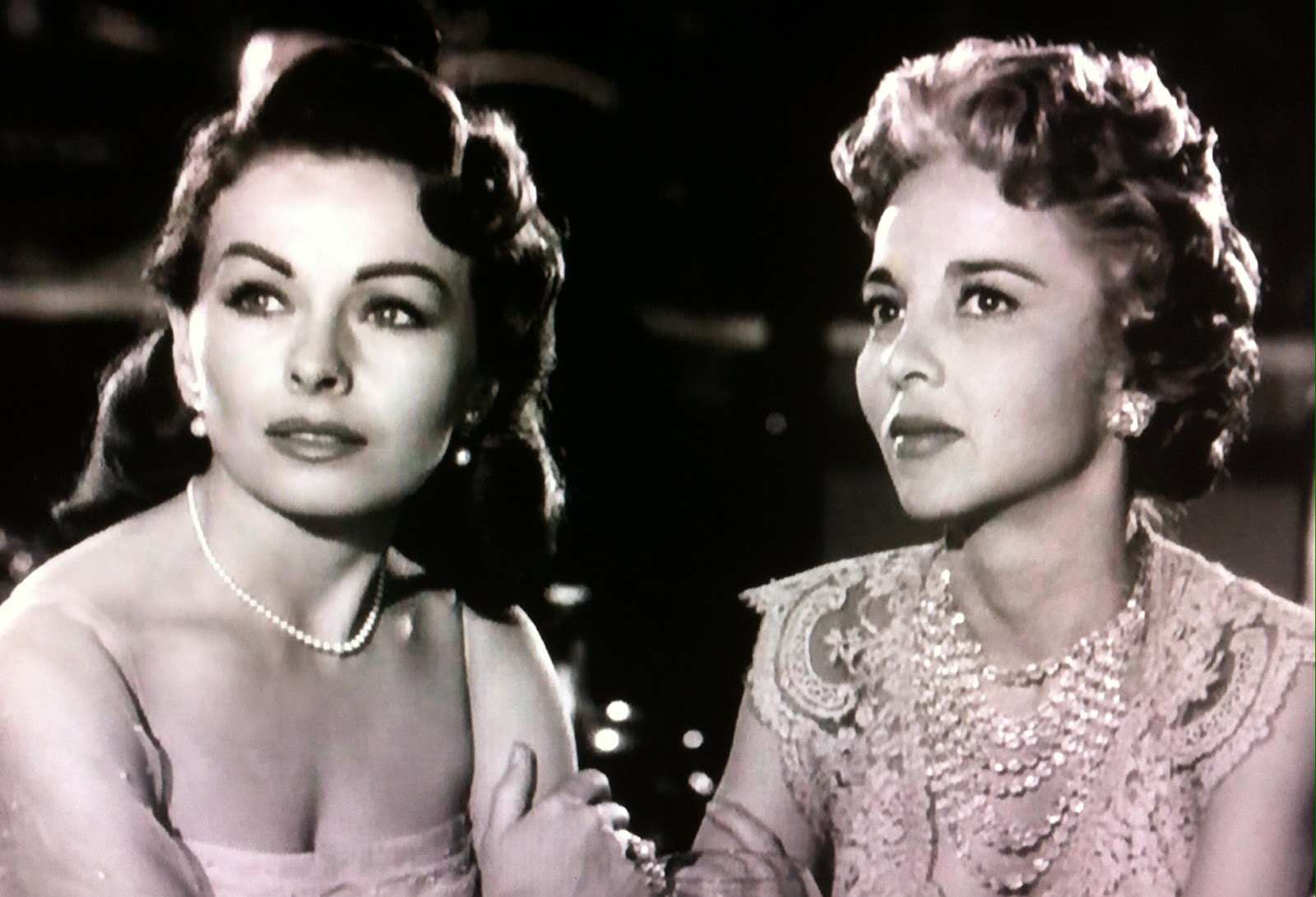 Lewis' longtime friend Frank Sinatra was tapped to play him, and therein lies the key reason that the film works.  Sinatra was at the peak of his powers as a singer and as an actor in 1957, and while THE JOKER IS WILD is set up to rise or fall almost solely on his shoulders, it succeeds solidly at that level.  It isn't surprising that he handles the songs superbly ("All the Way" received an Oscar nomination for best song), singing them live rather than pre-recording and lip-synching.   However, those primarily familiar with Sinatra the actor through his Rat Pack pictures will be pleasantly surprised by the chops he shows here. 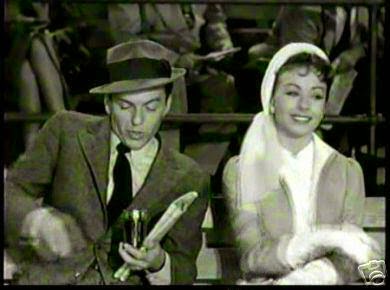 Fresh off two Oscar nominations in 4 years (FROM HERE TO ETERNITY, THE MAN WITH THE GOLDEN ARM), Sinatra nails Lewis' nonchalant persona and perfects the offhand delivery of the comic's one-liners (i.e. "I woke up at the crack of ice").  He doesn't attempt a direct impression (Lewis' distinct elocution was recorded for posterity on the 1961 LP It Is Now Post Time, on Sinatra's Reprise label) but captures the essence of being "always on".  He's also impressive in the scenes immediately following the attack.  The superb execution of Sinatra's hospital awakening (and his immediate reaction to the realization that he's mute) says it all, making it unnecessary for Vidor to go into detail about the years of therapy Lewis needed to regain the ability to speak. 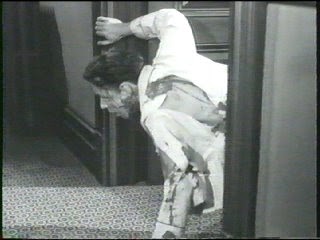 While it's Sinatra's show all the way (yeah, I know, too easy), the excellent supporting cast deserves mention for fine work in often thankless roles.  Quintessential sidekick Albert has a few good scenes as the ever devoted pianist (and butt of lighthearted jokes onstage); Garland has a one-note role as Albert's long-suffering, equally patient wife; and Gaynor gets the showiest female part as the lady who finally lands Sinatra but is slow to realize the downside.  Curiously, real names are used for Lewis, Mack and Stewart but mafia figures are renamed in the screenplay (de Corsia's character is based on the notorious Jack McGurn).

THE JOKER IS WILD just kind of peters out after two hours, ending with a half hearted "resolution" on Sinatra's part but commendably avoiding a neat wrap-up of his troubles.  It's an underwhelming finale but not nearly enough to sink this well-directed bio, one of the best of its era. 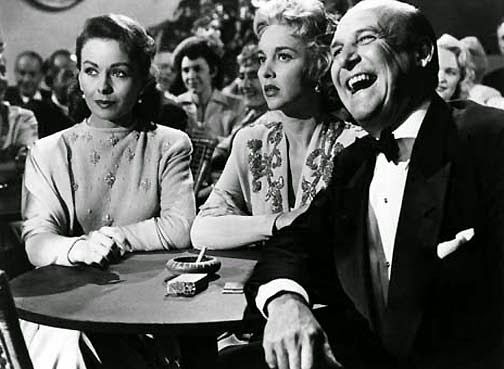 Two reasons often noted in this space: Paramount has been indifferent to many catalog titles, and it is also possible that music rights could be an issue.  But there must be something more going on in this particular case, since THE JOKER IS WILD was never even made available on VHS, unlike most other Paramount titles.  The picture's unique structure provided for 75% of the net profits to be split between Lewis, Sinatra, Vidor and author Art Cohn (who wrote Lewis' biography of the same name in 1955) while Paramount financed the production.  It's possible that there is an estate issue with one or more of the four principal partners.  (Side notes: Cohn died a mere six months after the film's release in the same plane crash that claimed the life of his next biography subject, AROUND THE WORLD IN 80 DAYS producer Mike Todd.  Director Vidor died of a heart attack in 1959 after completing only one more film, A FAREWELL TO ARMS.) 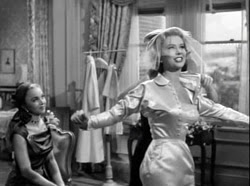 Where do I begin?  I guess by restating the obvious: it is one of Sinatra's finest acting performances, and an engrossing telling of Joe E. Lewis' life story (liberties notwithstanding).

THE JOKER IS WILD is fascinating viewing for Rat Pack aficionados.  There's a scene between Lewis and a cutting heckler that seems much closer to Sinatra's volatile late-career image than to the seemingly indifferent Lewis, and if aspects of Lewis' performance banter look a little familiar, it's because Dean Martin borrowed quite a bit of it (including directly lifting a few jokes) in reestablishing himself as a solo act post-Jerry Lewis.  In a sense, you're seeing Frank's version of what would become Dino's stage persona.

Bottom line:  Let's hope this title is made more widely available in the near future; until it is, TCM airs it about once a year.
Posted by Hal at 4:58 PM

It IS surprising that this hasn't come out yet on DVD, as it's an important film in the Sinatra canon. If it's a rights issue, you'd think the estates or whatever would get together to resolve it, as money on video sales would be a lure.

If it's up there with Sinatra's best performances, then I *must* see this one! Thanks for the review.