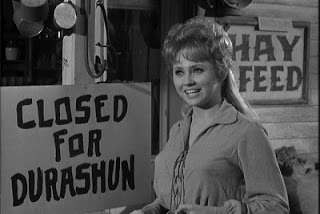 F TROOP: "Honest Injun" (1965 ABC-TV/Warner Brothers) Season One, Episode 12.  Original Air Date: November 30, 1965.  Starring Forrest Tucker as Sergeant Morgan O'Rourke, Larry Storch as Corporal Randolph Agarn, Ken Berry as Captain Wilton Parmenter, Melody Patterson as Wrangler Jane, Frank deKova as Chief Wild Eagle, James Hampton as Bugler Dobbs, Bob Steele as Private Duffy, Joe Brooks as Private Vanderbilt.  Guest Stars: John Dehner as Professor Cornelius Clyde, Lou Wills as Running Bull.  Written by Ed James and Seaman Jacobs.  Directed by Charles R. Rondeau.
The latest juicer for Sergeant Morgan O'Rourke's eponymous Enterprises?  A gold strike sparked by just $75 in nuggets by salting Calico Mountain, "12 miles north by northeast of Fort Courage".  Unfortunately for the Sarge, Professor Cornelius Clyde witnesses the plant and beats O'Rourke to the punch.  Moving the bullion to Laramie, Clyde steals the Gold Rush, sells out of land claims (and "magic elixir"), and renders the Sergeant's saloon as deserted as the rest of the Fort.  O'Rourke threatens the confidence man with the clink, only to back down once the Professor counters with the threat of exposing the Sarge's own subterfuge. 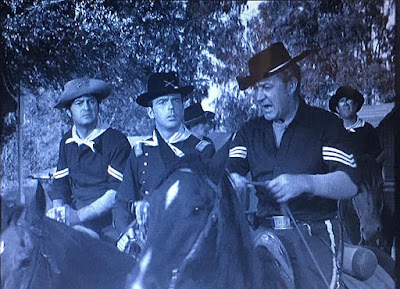 The Professor is allowed to depart hastily with his ill-gotten gains, but after looking up the land plots and determining the supposed Pazo land sold is located in Yellowstone Park, even Captain Parmenter realizes his men have been had.  The CO sends his non-coms out to locate the swindler.  Too bad Clyde's blackmail material severely limits any motivation O'Rourke and Agarn have for the Professor's capture.  Needing to lay low for a few days, the troopers head for the Hekawi camp--and promptly learn that Professor Clyde has beaten them there, too. 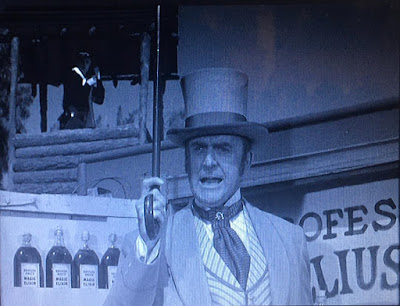 Sergeant O'Rourke collides with TV's reigning guest conman and unsurprisingly finds his most formidable challenger to date.  MAVERICK veteran John Dehner (Shady Deal at Sunny Acres, Greenbacks Unlimited) is in fine form as the oily Professor Clyde, slyly guaranteeing "14 Karat solid gold" (i.e., 58% pure!) on each and every parcel of land.  And oh so generously throwing in three bottles of Running Bull's Magic Elixir, which keeps Clyde's native sidekick ("the last of the Pazo Indians") looking remarkably youthful for his claimed 122 years of age. 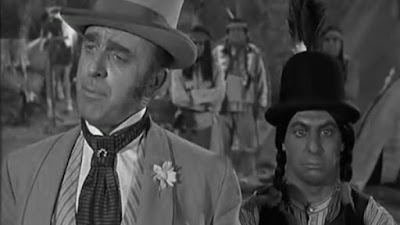 Just how daunting is Clyde?  He's the rare adversary to make O'Rourke lose his cool, once the Sarge finds that the Professor has elbowed his way into a deal with Wild Eagle that threatens the Enterprises' key partnership.   Agarn has even more trouble with the pesky Running Bull, and for once it really does look like the end of the line for the 50/50 partnership. 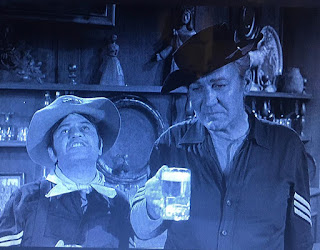 Key to it all is Dehner, keeping the troopers enthralled with that resonant voice as he relieves them all of their solvency.  It is a bit jarring to see him without his mustache, and if you're wondering why, well, the Professor's final ruse likely explains the need to be clean shaven.  Forsaking his signature facial hair for one half-hour role would be typical John Dehner--full commitment to the part was always a given. 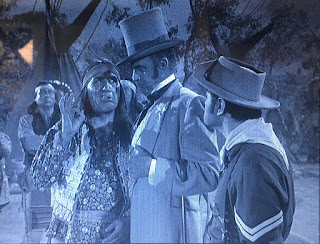 With James, Jacobs and Rondeau as the creative team F TROOP gets his mojo back after two lackluster outings with Honest Injun.  It isn't quite perfect--Chief Wild Eagle seems far more gullible than one would think possible--but to be fair, we all want to live to be 143 years old, right?  Jane's coincidentally timed spying on the Hekawi camp is another eye opener: suffice to say it's a good thing she isn't there to overhear other powwows. 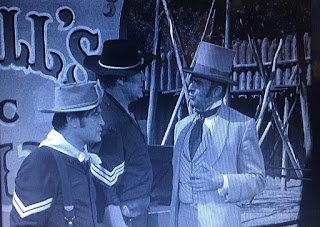 O'Rourke eventually seizes a small window of opportunity with that uncanny ability to think on his feet, restoring both his whiskey supply and his customers.  A commendable correction after Clyde has seemingly had the upper hand throughout, but does it last?  It's a shame we never got a return match.  Short of Phil Silvers himself making an appearance, you just couldn't get a better opposing force for one Sergeant Morgan Sylvester O'Rourke. 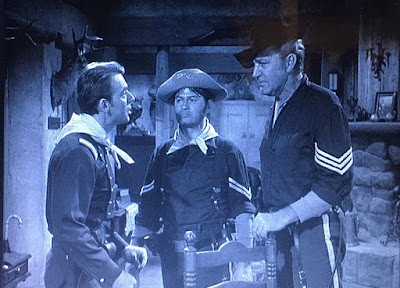 THINGS YOU LEARNED:
This segment had to have taken place after 1872, the year Yellowstone Park officially opened.
An educated guess on this one: wise old Wild Eagle is 40 years old, based on his new life expectancy on the 103 years Running Bull allowed himself with that "magic elixir".  (SIDE NOTE: I'd rather hear from 147 year old Flaming Arrow myself.)
In addition to being competent on the drum (O'Rourke vs. O'Reilly) and flute (That's Show Biz), Dobbs shows decent aptitude on bagpipes and tries out the violin as well.  Hell, as a multi-instrumentalist he puts even Richie Cunningham to shame!  Too bad that bugle is outside his limitations.
HOW'S BUSINESS AT O'ROURKE ENTERPRISES?
Pretty bad throughout, with the durashun of that gold strike taking up most of Honest Injun.  Then, just when the status quo becomes king again, a new discovery near Cheyenne by the titular Chief Thunderbird empties the saloon--and town--a second time. 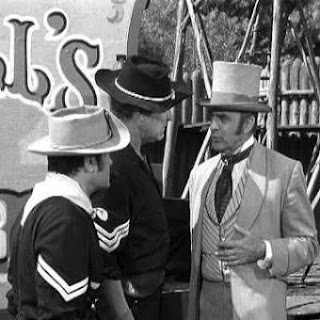 WHERE THE HELL IS FORT COURAGE ANYWAY?
Nagging question that deserves its own comment.  The location gets a little fuzzier in Honest Injun.  I assume that Calico Mountain is no relation to the Calicos in California, but the gold strikes in Laramie and Cheyenne and plots sold in Yellowstone Park clearly suggest Wyoming.  It's a Hell of a lot further away from Dodge City than other segments suggest, at least this week.
NUMBER OF TIMES O'ROURKE COULD HAVE BEEN CHARGED WITH TREASON?
There's other charges he could have faced, starting with fraud, but the Sergeant is safe from any suspicion of aiding and abetting the enemy thanks to Wild Eagle's reluctance to reveal their deal to Clyde.
PC, OR NOT PC?
Uh, what's this episode's title?
THE BOTTOM LINE:
After a mini-slump with two consecutive installments by first-time writers that were way too conventional, F TROOP gets its edge back with this riotous, double-cross packed entry from series creators James and Jacobs.  Watching Forrest Tucker and John Dehner go at it makes for one highly entertaining half-hour and the one-upmanship doesn't end until the fade-out.  (***1/2 out of four)
F TROOP currently airs on Circle TV Network.