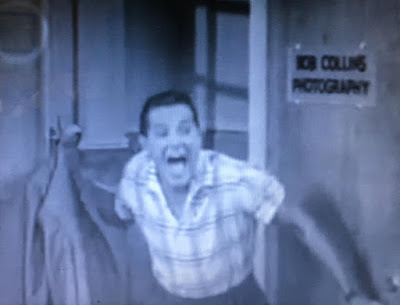 He may have consistently struck out with Miss Sweden, but Bob has a pending turn at bat with Miss Holland, who he's been hired to photograph.  That is, if he doesn't have to fly back to Joplin to keep Grandpa out of the clutches of a much younger gold digger who has moved in.  Margaret is alarmed when he shuns her holiday invite.  The senior Collins' reason for staying in Missouri?  He doesn't want to leave Alice. 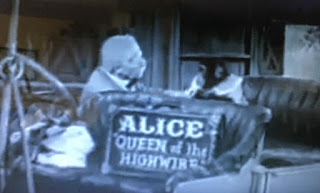 Bob is dismissive of his sister's concern until he gets the eldest Collins on the phone and finds him thoroughly smitten with his acrobatic house guest.  Alice has conned the old codger out of a complete new wardrobe, sounds like an alcoholic, and tries to literally to steal his watch as they're speaking.  After Grandpa takes Alice's side when Bob protests, all afternoon appointments are off: Bob has the Beech preflighted for an emergency trip. 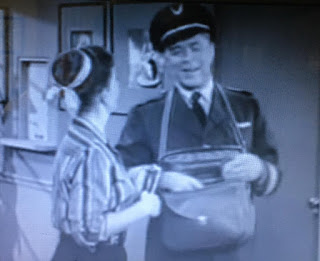 While the shutterbug is away, the wannabe wolf Paul Fonda schemes to take his place in the studio (stealing the idea from nephew Chuck!) and on Mulholland Drive that night with the ravishing Dutch pageant winner.  Unfortunately, Grandpa's attachment is more reassuring than originally thought--that "drunken carnival contortionist" is actually a chimp, which Bob only realizes after he's landed in Missouri. 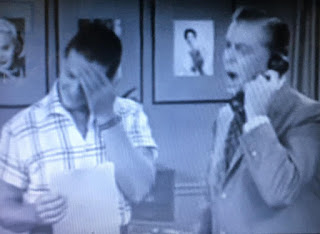 Grandpa Moves West gives us another instance of foreshadowing Paul Henning's later and biggest hit THE BEVERLY HILLBILLIES, which mined humor from Elly May's pet chimp "Cousin" Bessie throughout its nine year run.  Alice gets plenty of screen time interacting with our star in both of his roles: walking the high wire, drinking a cola, and (best of all) giving the tired airman an unexpected co-pilot. 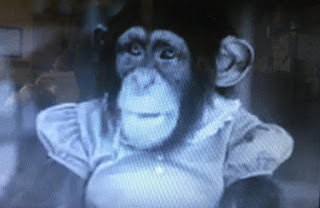 "He couldn't get a picture of an Indian in Albuquerque!"

Less gimmicky comedy comes from Paul Fonda's rather transparent attempt to join Bob in the studio--just to help out, of course.  There's no evidence that any photographs were taken in Collins' absence, but we have Fonda's word that he got the Dutch damsel to Mulholland.  Lyle Talbot is at his smarmy best in his penultimate appearance as Fonda, whose name was yet another in-joke: the real Paul Fonda was a friend of Paul Henning's from the producer's days at CBS Radio. 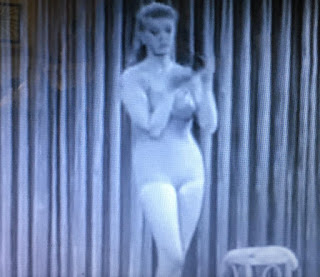 1957 Deb Star and April 1959 ESCAPADE cover girl Joan Tabor was a popular guest star through the mid-Sixties, but this was her only BOB CUMMINGS SHOW.  The Sioux Falls native and future Mrs. Broderick Crawford (talk about a guy outkicking the coverage!) tragically died young, of an accidental overdose in 1968.  Murray Alper practically made his living playing cabbies, and in fact had played a truck driver in one of Cummings' most enduring films, SABOTEUR (1942). 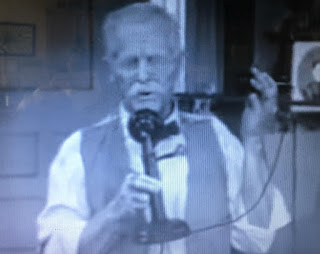 Grandpa's coastal flights were a grave concern in Bob in Orbit, so it's a tad jarring just seven episodes later to see the octogenarian encouraged into the air by the entire Collins family.  I guess it's less of a threat than a gold digger displacing reliable, age-appropriate Dixie (unseen here, but we're told that Alice attacked her!). 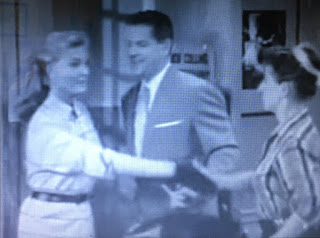 With the loss of Shirl Gordon reducing the writing team to a duo for most of this final season and 150 episodes in the can, inspiration was frequently starting to run low.  Grandpa Moves West chugs along agreeably, but never comes close to the comedic heights of the previous week's Bob Plays Margaret's Game, a knockout that can stand with the best of any season.  The addition of Tammy Marihugh (LOVE THAT BOB's Cousin Oliver, basically) to the cast was only seven segments away. 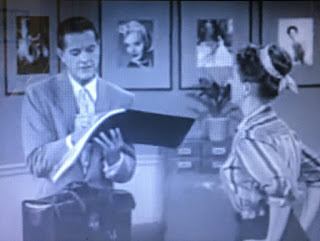 I guess you could say Margaret was by insisting that Bob fly to Joplin, but it certainly wasn't intentional on her part (for once).  The same can't be said for Paul Fonda, who for once truly seems like the wolf Bob always claims him to be--deflection, no doubt.  In a twist, the comeuppance here is all Paul's. 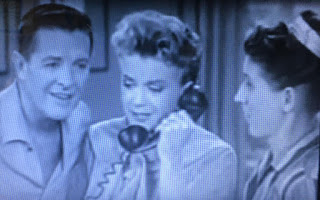 Not during the running time of Grandpa Moves West, but he was on his way to try to get Miss Holland to Mulholland at the conclusion. 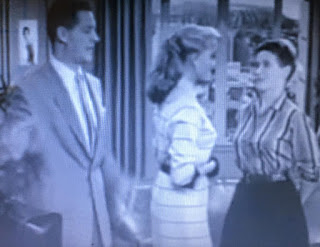 Some nice moments with Talbot put to especially good use, but belly laughs are notably absent.  Still, the smiles come at an acceptable pace and the contrivances involving Alice aren't groan-inducing.  Thoroughly average installment, which is considerably better than many that would follow in the fifth season's home stretch.  (**1/2 out of four)

CHECK OUT "GRANDPA MOVES WEST" FOR YOURSELF, BELOW!