The following is The Horn Section's contribution to the Big League Blogathon, hosted by Forgotten Films!  Yes, it's blogathon time again, and I am honored that Todd has invited me to contribute.  Be sure to visit Forgotten Films to check out all the other contributions: after all, that's what the Looper would want, if he could be here with us today at the Astrodome.

A personal note: I attended my very first Major League Baseball game on July 8, 1977, the same day that the following film was released.  The Rangers, behind legendary Dock Ellis, defeated the Angels and some guy named Nolan Ryan 9-5 at Arlington Stadium.  The lure of MLB in person kept me from seeing this film until the Sunday afternoon matinee on the 10th. 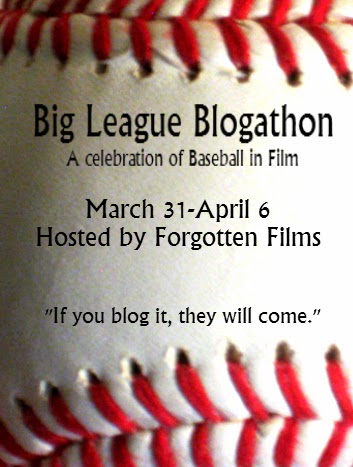 One year after their near miss as an expansion team, the Bears are back sans Coach Buttermaker and female pitching prodigy Amanda Wurlitzer.  After the team pulls a mutiny against their militaristic new coach, a proposed trip to Houston for a game in the Astrodome is in jeopardy.  Of course, it's Haley's Kelly Leak who has a solution to everything: New York transplant (Baio) as the new pitcher, a "borrowed" van as a ride to Houston, and mentally challenged groundskeeper Stuthman ("Hello!  How are you?") as the new coach--at least, until the parents are gone.  Kelly has a hidden motivation for rejoining the team to make the trip, as his estranged father (Devane) now lives there. 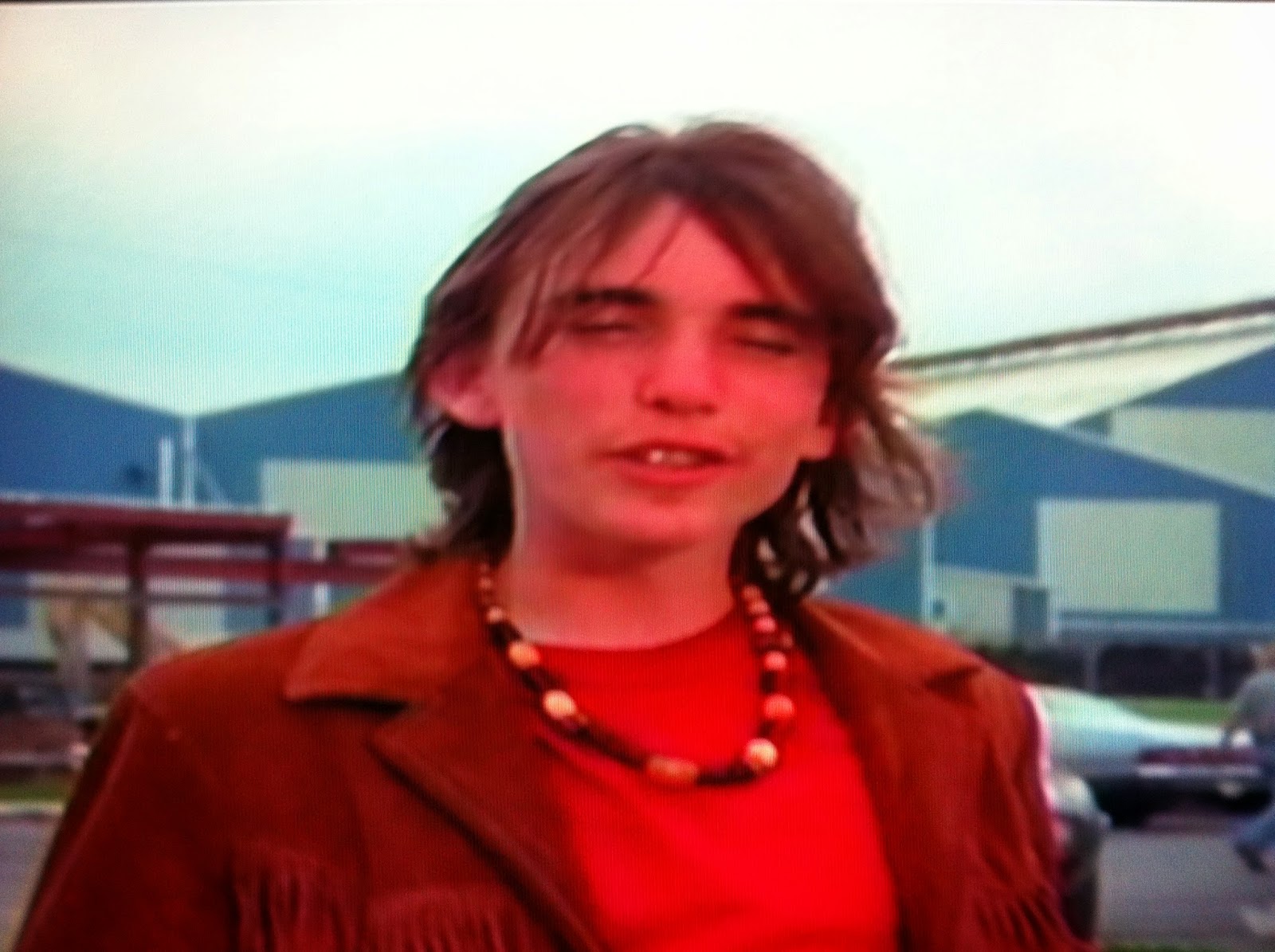 The initial BAD NEWS BEARS (1976) was a self-contained story with points to make, not unlike the year's other big underdog story, ROCKY.  Indeed, Bears coach Morris Buttermaker gained redemption after years of missed opportunities with a near miss, a moral victory against a seemingly invincible champion.  Just like Rocky Balboa.  The bigger messages to be taken from BEARS (about the dangers of winning at all costs and of parents living vicariously through their children) were also appreciated by adults, but for all the four letter words being thrown around, pre-teens still made up the bulk of the Bad News Bears' audience. 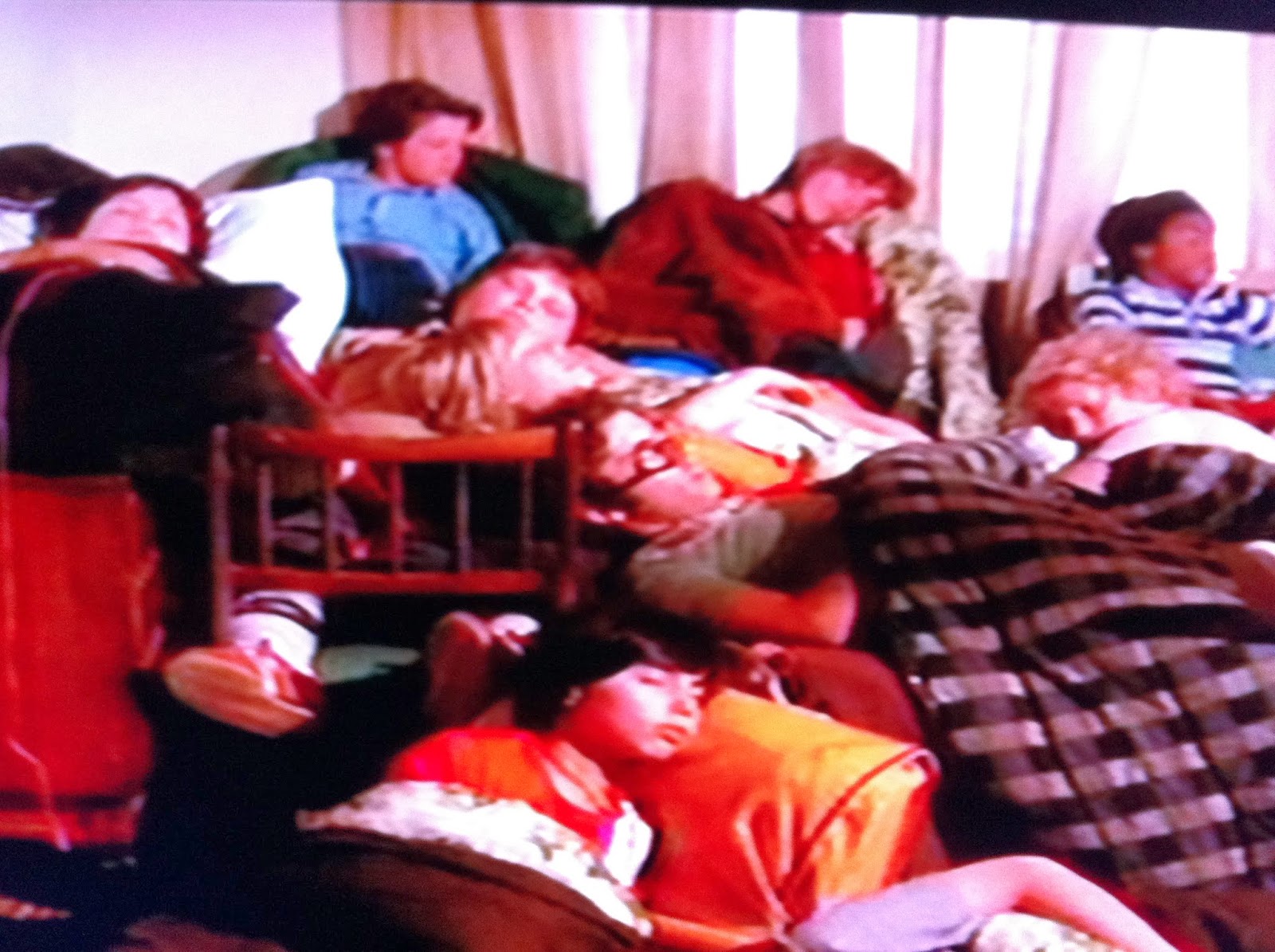 Continuity sticklers will note right away that the Bears aren't the reigning "California champions"; in fact, they finished second in their league.  No matter.  It's clear the players are literally taking over from the opening scene, when disciplinarian new coach Manning (Sweet) is unceremoniously fired by the team.  To firmly establish our new leader (and undisputed star with Matthau and O'Neal gone) it's Kelly Leak who enters heroically on his bike and tells him to take a hike.  Hammering it home, Leak arrives via Harley in his next two scenes as well, one with a blonde passenger, the other with the new pitcher.  He subsequently procures the team's "ride" and drives them to Houston, coolly waving off initially suspicious cops along the way. 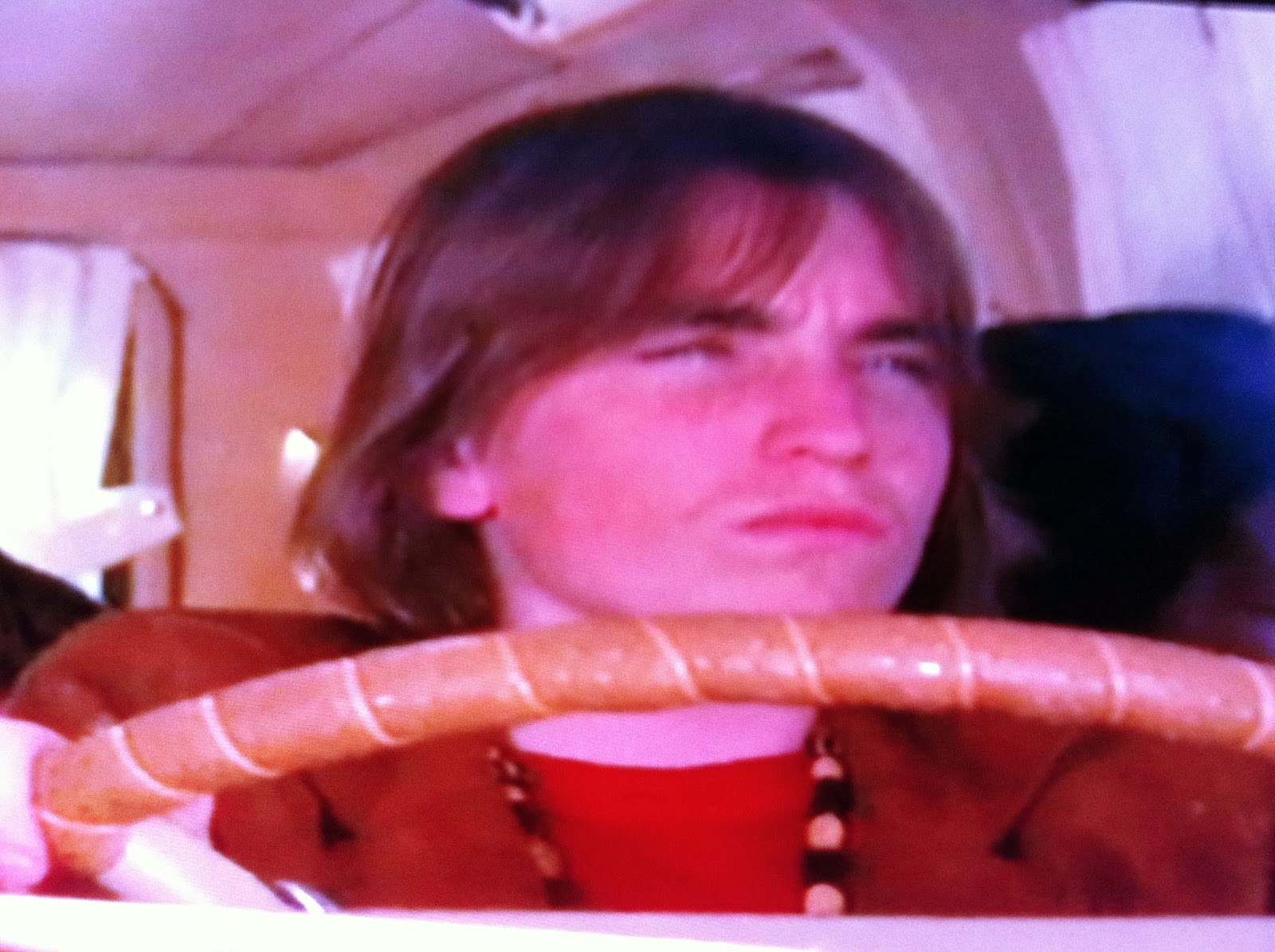 Yes, the kids are running the show in the sequel.  BREAKING TRAINING marks the transition from a self-contained first film with pertinent points to make into a crowd pleasing franchise.  Beating ROCKY to a sequel by two years, BREAKING TRAINING establishes the template Stallone would follow: hit the same chords that resonated in the first outing while giving fans the outcome they want this time.  This doesn't always run smoothly: it requires the Bears forgetting everything Buttermaker taught them in the year that has passed, best demonstrated by the team's thorough thrashing at the hands of a Native American team in en route to their destination. 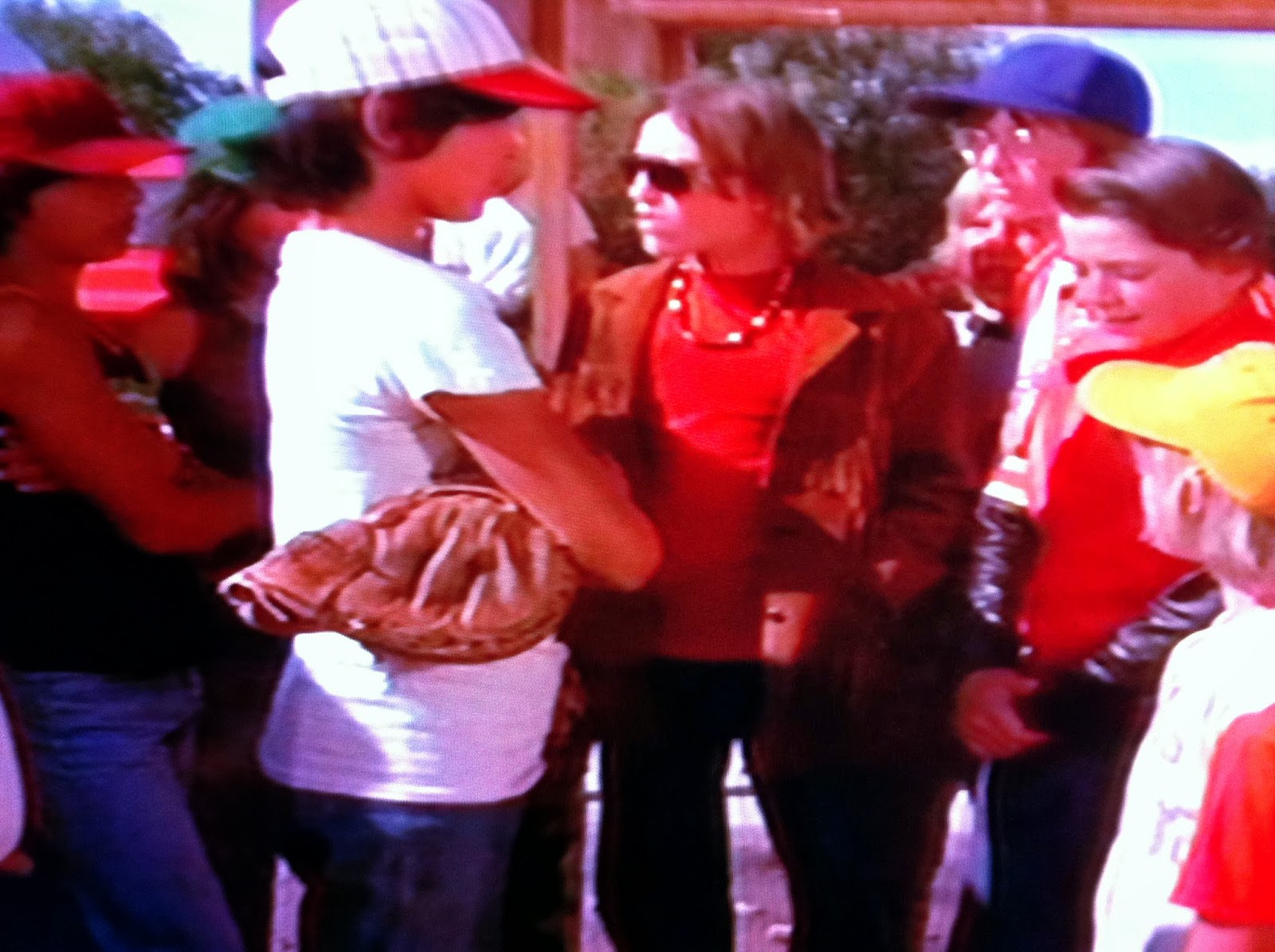 Further stacking the deck, Engelberg (played by Starr in a casting change) has gone from a solid # 3 hitter to just plain uh, portly, and Kelly's new pitcher, Carmen Ronzoni (Jimmy Baio, SOAP) is shown to be a load of hot air in that New Mexico pickup game.  Ronzoni has studied the windups of Catfish Hunter and Luis Tiant like any twelve year old baseball fan did in the mid-70's, but can't get the ball over the plate.  He's so bad that even his ability to steal multiple copies of Playboy doesn't win his teammates over.

It must be said that Kelly's put-upon dad Mike Leak turns out to be one Hell of a coach.  A strong case can be made that he's better than Buttermaker--and I'm about to.  Consider that Buttermaker's pitcher (Amanda) was a finished product when he brought her to the team.  Leak inherits hapless Ronzoni and fixes his mechanical problems in two minutes.  Literal minutes, not screen ones.  No dissolves, no montage needed.  Leak had a grand total of four days (tops) to re-teach the Bears all the forgotten fundamentals and get them ready to win a game in the Astrodome.  Buttermaker had weeks to get the Bears ready for the season opener, and didn't even have them ready to record a single out.


True, Buttermaker was quite a hustler who knew all the tricks both on (i.e. leaning into pitches, spitballs) and off (getting the two ringers on the team) the field, but Mike Leak is no slouch in that category either.  Mr. Leak utilizes the old "hidden ball" trick in a very timely manner on the field, and finds a way to have his son bat in three consecutive innings (anyone else notice that?).  And yet, Mike's baseball knowledge is still dwarfed by the resourcefulness he demonstrates outside the lines.  (Like father, like son.) Mike Leak smooth talks Officer Mackey (Lane Smith) into leniency when the van is discovered to be "hot", convinces super-rich Texan Sy Orlansky (Clifton James) to be the team's benefactor, and even gets the big game extended with the impromptu "let them play" chant in the film's most memorable scene.  Mr. Leak has little trouble winning over everyone except, ironically, his own son, creating the core conflict in the script (an early effort by RISKY BUSINESS auteur Paul Brickman).

Occasional sappiness from the father-son reunion (or from the friendship that has formed between Tanner and Lupus) is kept to a minimum though.  BREAKING TRAINING is a feel-good film through and through, best exemplified by it's theme song.  "Carmen" makes an appearance here and there, but is largely replaced by "Life is Looking Good", a quintessentially Seventies theme song if there ever was one:


Could anything root this film in 1977 more than that?  Well, I guess the van could have had a CB radio, but Brickman avoided that sign of the times.  He hit plenty of others, though, and came up with a highly watchable sequel that would surely never get greenlighted by Paramount (or any other major studio) today.  Brickman and Pressman gave us pre-teens on an unsupervised trip in a stolen van across three state lines, smoking, swearing and shoplifting along the way.  With no punishment: The Bears avoid "the joint" (despite Ahmad's frequently stated fears) and emerge with a literal triumph instead of a moral one--in The Freaking Astrodome--easily the coolest and most futuristic stadium around at the time.

The Bad News Bears were living every twelve year old boy's fantasy in 1977, ensuring an enduring cult following for THE BAD NEWS BEARS IN BREAKING TRAINING.  While that following largely consists of males born between 1964 and 1969 (face it, Haley was never exactly Tom Cruise, and Jimmy Baio never matched his cousin Scott's "heartthrob" status), and this second chapter lacks the groundbreaking material of the first film, enough of the cast returns for BREAKING TRAINING to remain a surprisingly entertaining time capsule with a number of very funny scenes.  Two memorable favorites: Stuthman meeting the players' parents and Barnes routing two Astros officials during a diamond chase. 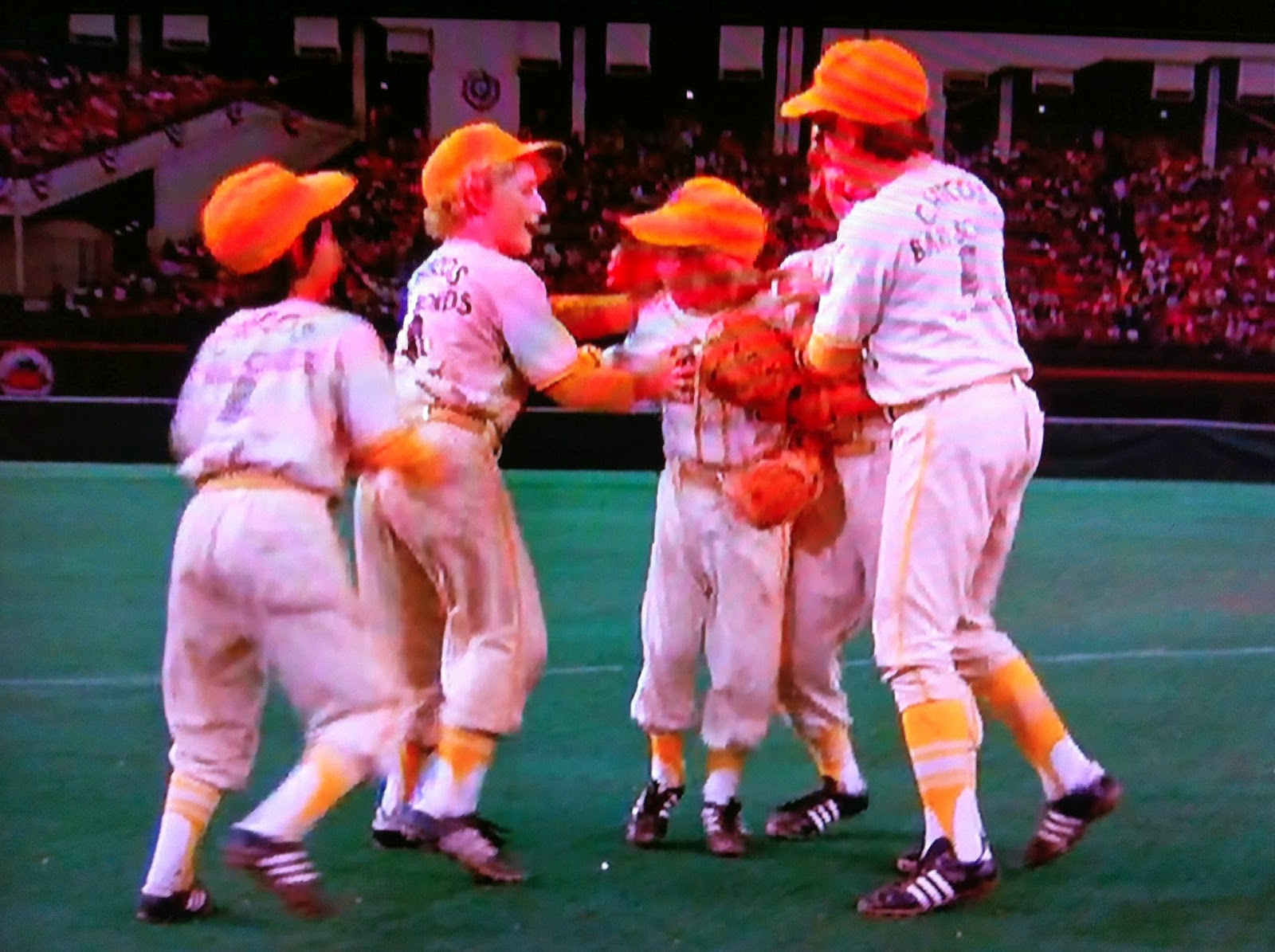 BREAKING TRAINING also offers some redemption at its own conclusion, with humbled Carmen Ronzoni getting the last at-bat this time around.  And while it might not be Gary Cooper's PRIDE OF THE YANKEES speech, just see if you don't get goosebumps during the "Let Them Play" chant.  Father and son finally get in synch and bring the entire crowd at the Astrodome crowd to its feet.  They even get approval from the team's biggest stars (Bob Watson and Cesar Cedeno) to keep playing.  It's a worthy followup to "The Big Looper's" catch against the Yankees.

Yep, and pretty cheap, too.   Recommended as the last real moment of triumph for the Bears.  Only one year later, Devane, Baio and Barnes were all out and Tony Curtis was in for the franchise killing BAD NEWS BEARS GO TO JAPAN, which shoved both the Bears and baseball into the background in favor of a Tokyo travelogue.  Suffice to say it was very difficult to find a single creative decision in that 1978 fiasco that wasn't ill-conceived.  Plans for a fourth Bad News Bears film (that would have taken the team to Cuba) were scrapped, and the franchise moved to television for two seasons with an entirely different cast that included a young Corey Feldman.

I'll leave you with one puzzling question that has persisted throughout the years.  No, I'm not talking about Mike Leak's unnoticed liberties with the batting order.  Rather, who is this hottie? 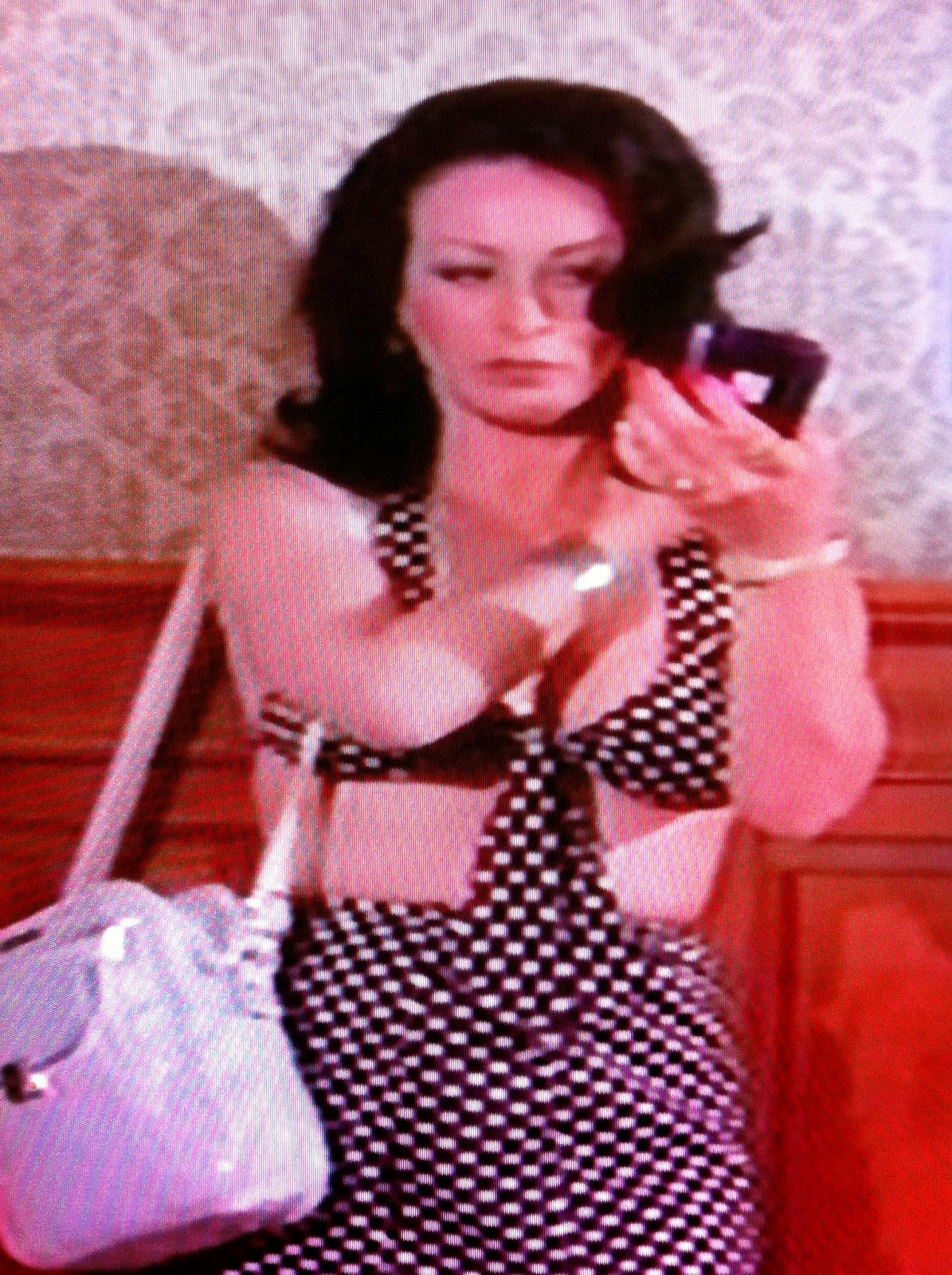 She has no lines, and no mention in the credits.  A rather obvious looking prostitute back at the Bears' original hotel in Houston (before Sy Orlansky makes the team his guests), she does turn up again, in a great "blink and you'll miss it" sight gag.  We see her at the game, apparently the uh, "guest" of Officer Mackey, who is enjoying the Hell out of those free tickets from Mike Leak:

Isn't that another "lady of the evening" to his left?  Go Mackey....go Mackey....  But seriously, free tickets for the cop AND a hooker for an Astros game??  Could Buttermaker have pulled that one off???  I rest my case!
Posted by Hal at 7:00 PM

This is one I've not seen, but your review has me intrigued. Sounds like an entertaining film. :)

You called it! I was born in 1967, saw this film in the theater and loved it. I have not seen it since, but still think fondly of it. Great review.

The reason it was ''peppered with bad language'' (as was the first one) was the studio wanted to avoid the dreaded [G] rating (the series were all [PG]) because by that time [G] (unless it was Disney) was box office poison - it was seen as ''suitable for small children... only''.

I know her. My first husband and i lived with her son in Houston Texas. Her name is Lee Love.