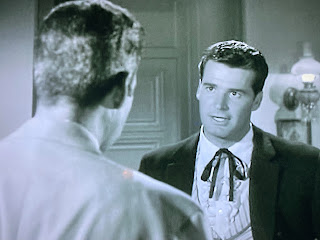 A lengthy case of runbad on a riverboat trip to New Orleans leaves Bret Maverick flat busted and open to an intriguing business proposition from Rene Gireaux, who offers a $1,000 advance, to be quintupled later.  Gireaux needs an American citizen, of "exquisite tastes, but bankrupt" to bring Steve Corbett, murderer of his son, to justice.  No, not at gunpoint: Bret's task is to merely persuade Corbett back to U.S. soil from Tampico, where he runs a casino. 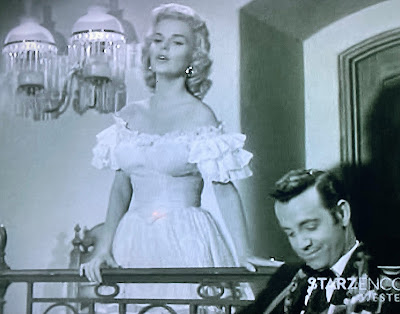 The opportunity to replace his full bankroll and then some sends broke Bret across the Gulf of Mexico to La Cantina Americana in the titular city.  After finding employment in the genial Corbett's establishment, Bret also finds himself believing the expatriate's claim of innocence and nullifies the agreement with Gireaux.  Maverick's expertise assists Corbett in weeding out cardsharps and disloyal employees who are cheating the proprietor, and grateful Corbett rewards the gambler with a fair share of the savings.  When sultry singer Amy Lawrence entices Corbett to follow her to Corpus Christi, Bret is left in charge--but also smells a trap, leaving Maverick with a difficult decision.  Should he stay or should he go? 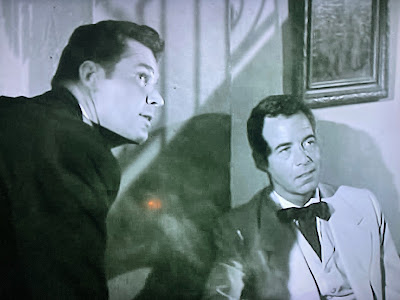 Gifted writer-director Douglas Heyes wrote a MAVERICK styled noir for each lead during the second season: Prey of the Cat for Jack Kelly and Escape to Tampico for Garner.  The former is far grimmer but surprisingly the more successful of the two.  Part of the problem is the setup: while Bart is the femme fatale's victim in Cat, giving us a much higher emotional investment in the proceedings, Bret is essentially a spectator in his installment which really highlights a cynical Gerald Mohr in a role that plays off the actor's resemblance to Humphrey Bogart. 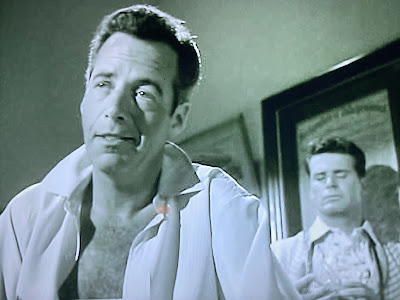 Visually, Escape to Tampico looks like Heyes' version of a MAVERICK CASABLANCA, even using the same sets as that 1942 classic.  Steve Corbett operates a nightclub/casino, wears a white suit, refuses to ever drink with the customers and can't return to his homeland.   Sounds familiar--but that last problem really points towards this episode's larger inspiration: ALGIERS.  In the 1938 American version, Charles Boyer's Pepe Le Moko (title of the original French film) is a wanted man elsewhere turned pillar of the local community.  His Achilles heels? Longing for both the France he can't return to and the visiting femme fatale who reminds him of it.  (Mohr fits only the second qualification for most of Escape to Tampico--more on that below.) 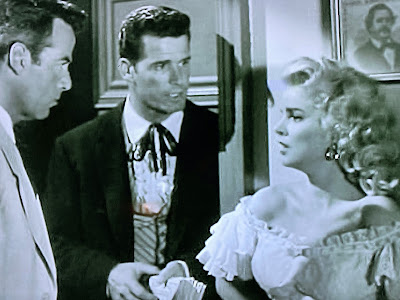 Heyes doesn't entirely do away with humor in Escape to Tampico: Bret pulls a humorous con to get the casino job originally refused him and has a ready quip for each crooked patron he dismisses from La Cantina Americain.  That's about it, though, and as Bret's immediate problem of bankroll health subsides, Steve's unrequited love moves to the fore.  We eventually learn that Steve killed Victor, but he hints it was justified, and it seems out of character for Bret to make himself the last line of defense against a man who saved his life earlier.  Bret he also proves his erstwhile self description as the "second slowest gun in the west" inaccurate as he outdraws the expatriate.  With less than convincing incentive to play the hero and an often peripheral role here, this is arguably the least satisfying Garner solo episode of the usually stellar 1958-59 batch. 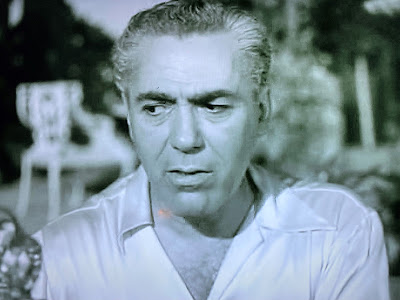 Steve would likely sniff out the trap if he questioned the patron who triggered Amy's sudden departure, since it appears the customer really has no connection to the American beauty.  It appears that Steve's cool is being melted by desperation and loneliness (again, paralleling Boyer rather than Bogart) but on the whole all motivations (save Gireaux') are nowhere near as delineated as in Prey of the Cat.  Does Steve have a death wish?  He might--after all, was it inexperience that had his dealers pulling the wool over his eyes or distraction?  Corbett gives the impression of being grateful for Bret's help, which would seem to indicate his life still has meaning to him.  Corbett's closing line also rings a little false: stating he didn't want to die in Mexico hints of a longing for the U.S.A.  It's another clear homage, as Bogart's Rick fought for the losing side of the Spanish Civil War.  But Corbett smuggled services for the losing side of the U.S. Civil War for a Confederacy that no longer exists, so that parallel doesn't translate so smoothly. 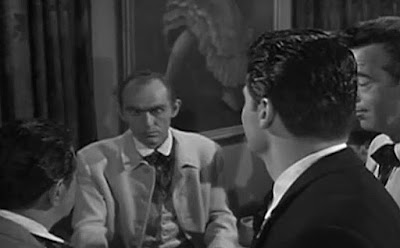 Mohr's the focus here but actually had a better showcase in You Can't Beat the Percentage a season later, an episode more faithful to the MAVERICK universe than this one.  Escape to Tampico isn't terrible, just a couple of steps down from Heyes' usual contributions--it could have been an episode of just about any straight-faced Western of the period.  For MAVERICK or for Douglas Heyes that's a letdown.  Hey, nobody's perfect.

Disastrously.  He lost $2,311 at the tables on his Riverboat trip from Memphis to New Orleans (plus the $47 he spent on the trip), then the $1,000 dollar bill safety pinned in his coat at the table in The Big Easy.
BOTTOM LINE:
It's a close race between Hargrove and Heyes as to who had the better MAVERICK track record.  Heyes had success with several atypical installments, but the reduced emphasis on Bret and uncharacteristic lack of clarity makes Escape to Tampico the weakest of his second season contributions.  Not terrible but in the end unsatisfying.  In a landmark season, average looks worse than it is.  Still worth a look for the typically strong contribution from Gerald Mohr and even more references to the cinema classics above than I listed--it'll take more than one viewing to catch them all.  (**1/2 out of four)
MAVERICK currently airs at 5 A.M. Central on Heroes and Icons (Dish Channel 293) and 9 A.M. Saturdays on MeTV (Dish Channel 55).
Posted by Hal at 5:40 PM

Hal, I really enjoyed your good write-up of the MAVERICK episode "Escape to Tampico." I agree that this episode of writer/director Douglas Heyes' could have been better, but subpar Heyes is still well worth viewing. I've been a fan of Heyes' work before I even knew who he was. I didn't start keeping tabs on who wrote, directed, produced, and photographed movies and tv shows until 1971. I first recall viewing MAVERICK in syndicated reruns in the 1960's by way of WHBQ Channel 13 Memphis, KAIT Channel 8 Jonesboro, and KARK Channel 4 Little Rock. Thank you to those local tv station programmers for giving us an array of excellent entertainment, back in the day.

Hal, keep doing what you are doing.

I would be remiss if I didn't note the presence of a pre-Untouchables Paul Picerni. I've never seen this episode in its entirety, and, unfortunately, Heroes & Icons is no longer available in my area due to its similarities to sister network Me-TV (i.e. program roster).

Gerald Mohr was the original TV narrator of "The Lone Ranger", and did a fair number of guest roles while also doing radio. Kids of the 60's remember him as the original voices of Green Lantern and Reed "Mr. Fantastic" Richards----in the same season!! (Paul Frees was his co-star on both projects)

Walter: thanks for the kind words! Heyes was truly an artist; MAVERICK and TWILIGHT ZONE were arguably the two best written shows in any genre of that era and he had several of the best episodes of both. Just a talented writer and director by anyone's standard IMO. I enjoyed MAVERICK locally on Channel 11 KTVT weekday mornings at 10 AM for many years then. Good times.

hobbyfan: This was Picerni's only MAVERICK, but AYK Mohr was one of the show's most frequent guest stars. Matter of fact, he appeared at least once every season except the truncated (13 eps) last. Always great whether the material was or not.

Did he play the same role each time, or other characters?