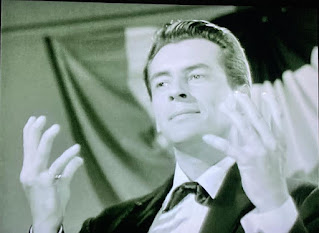 The first of our titular cities is Gold Flats, where Bart Maverick wins $800 in a poker game and is promptly relieved of it by businesslike but polite female bandit Stephanie.  The next morning Bart finds that Sheriff Murray will be of no help, since it was the mayor Bart bested in last night's game.  Forced on the next stage out of town by the lawman, Bart ends up in our second city, Brotherly. 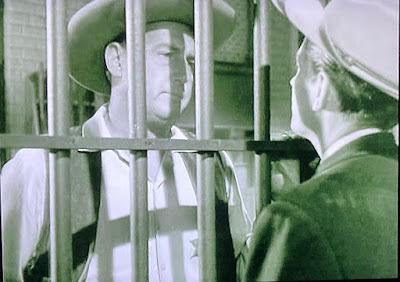 After chatting up Mrs. Adams on the stage over, Bart finds a reception to match the name despite the clean nature of Brotherly.  Brotherly Bart charms Adams' Ladies Aid group with an inspiring story of his triumph over the evils of gambling.  Even better, Maverick recognizes Ms. Malone in the group by her ring and perfume, and learns the real reason she robbed him--to pay off her father's debt, incurred in a card game in neighboring Hampton, where one can find all the evils expunged from Brotherly.  You guessed it: Bart completes the trifecta by entering Mr. Hampton's (crooked) game next door. 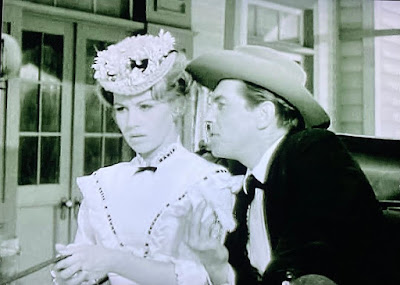 The third season of MAVERICK brought an almost entirely new group of writers to the show, and A Tale of Three Cities was the first contribution for both Robert Vincent Wright (The Bold Fenian Men) and Leo Townsend (Maverick Springs).  This crucial first sale for 40 year old Wright was the first step away from his Seattle day job: supervisor of motion pictures in Boeing's engineering division.  Wright only provided the story in his debut but with encouragement from producer Coles Trapnell, he would go on to script The People's Friend and the hilarious Greenbacks, Unlimited solo.  Wright literally stayed with MAVERICK to the end, authoring the 1962 series finale, One of Our Trains is Missing. 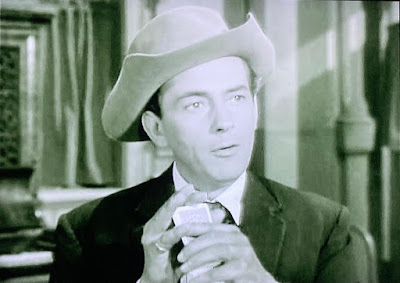 Roy Huggins observed that Jack Kelly would sometimes deliver a punchline with "a little too much care", and this comes to pass during reformed gambler Bart's luncheon speech.  That said, Kelly mostly acquits himself well during both sermon and the season's heightened emphasis on the show's comedic elements, getting several witty lines from Townsend and some perfectly played physical humor during the barnyard climax--featuring some unhelpful surprises from a chicken and a rake. 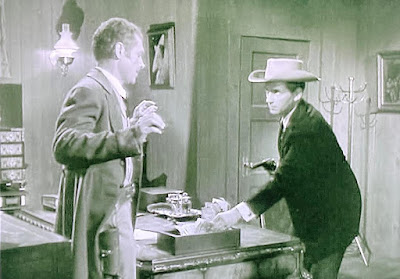 Best of all is the opportunity for Bart to make himself at home during incarceration, giving Kelly some choice interaction with Ben Gage, reprising his James Arness imitation after a very memorable performance in Gun-Shy.  John Hardy is far less hypocritical than Mort Dooley but more constrained by the book and more competent overall.  With Gage playing the role and Gun-Shy so prevalent in MAVERICK memories, it's a subversion of expectations to see Hardy bonding with Bart and proving to be a capable, if still rigid, Sheriff (though his blind spot is exploited in a big way by Hampton). 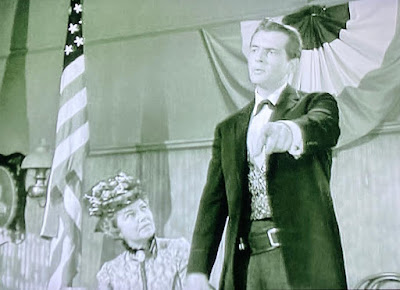 Helped by Martinson's sure hand, the writers debut with a great grasp of MAVERICK and Maverick.  Bart might be caught off guard by his thief, but his resourcefulness has rarely been on display so frequently in one segment: charming the Brotherly ladies enough to have them petitioning to his release (and making him the most comfortable prisoner in city history), picking up on Hampton's cheating before he even joins the game (a nice touch by Martinson with a simple cut of the cards), and staying several steps ahead of his adversary afterward.  (Yes, a woman can get the drop on Bart, but three men can't--nice rebound, Bart!)  Interestingly the cheat Bart sidesteps is lifted from UNHOLY PARTNERS, in which executive producer William T. Orr co-starred early in his acting career. 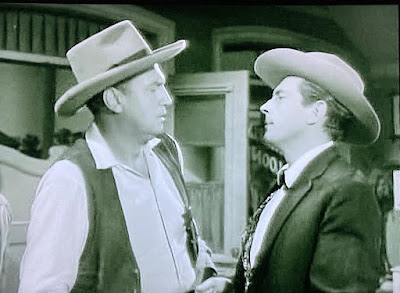 A Tale of Three Cities does contain one very noticeable misstep: Hampton's rather foolhardy gagging and binding of the Sheriff, who is left awake to witness the cardsharp's theft.  The villain's impatience makes little sense with little more than a week to go on Bart's sentence, and permanently, flagrantly getting on Hardy's radar makes even less.  It's the MAVERICK swan song for the always welcome Pat Crowley (The Rivals), but Ben Gage would return to parody Marshal Dillon twice more.

Maverick won $800 in Gold Flats as noted, and another $2,000 in Hampton Center.  He ended up giving Stephanie $1500 of the winnings in total (the additional $700 voluntarily) and $100 more went to the Brotherly saloon owner for property damages, leaving Bart with a still solid $1200 profit.

The Ladies Aid Luncheon speech contained a trifecta of pearls: "The only way to throw dice is to throw them away"; "Son, shun the roulette wheel as if it were the Devil's turntable" and finally "Get out, and work with your hands".  Real quotes or not?  Since Pappy was always consistent in telling the boys to stick to poker and had a dim view of other casino games, they could be authentic. 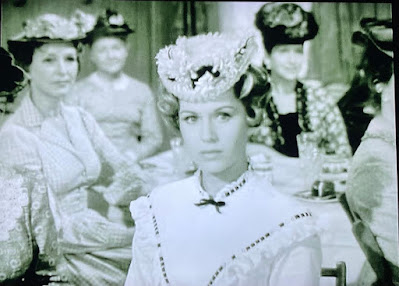 Consistently intriguing and amusing entry despite the rather glaring misstep late, A Tale of Three Cities remains highly watchable.  The situation seems less perilous than in the show's top tier installments, but everyone involved is in good, if not great form.  A solid addition to the MAVERICK queue, if not the first I'd choose for either the series or the season.  Wright and Townsend both had better scripts ahead of them, but overall A Tale of Three Cities is a pretty good start for both.  (*** out of four) 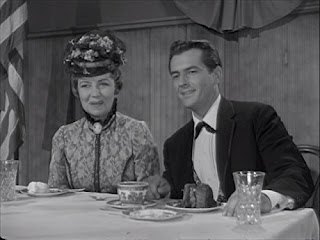 Y'think Ray Teal might've been a wee bit typecast as a sheriff, since he was also Sheriff Coffee for virtually the entire run of Bonanza.

thanks for reading Hobbyfan!

You're right, Teal sure played a lot of sheriffs, justices and marshals. He wore a badge on virtually every long-running western of the era, including twice more on MAVERICK. His best MAVERICK sheriff IMO was the crooked one in "The Day They Hanged Bret Maverick", a must-see episode IMO. I also loved his bit as the Justice in CHISUM.