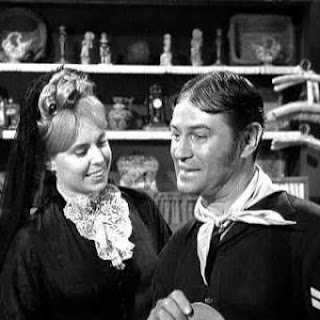 A telegram brings news to Parmenter of F Troop's newest reinforcement: Private Leonard W. "Wrongo" Starr.  To say Wrongo has a reputation as a jinx is an understatement: his stint in the Navy resulted in three sunk U.S. ships; his horse died his first day in the cavalry of chicken pox; and Starr's most successful outfit to date was General Custer's 7th at Little Big Horn.  Nevertheless, apprehensive non-coms O'Rourke and Agarn are there to meet Starr when he arrives on the noon stage. 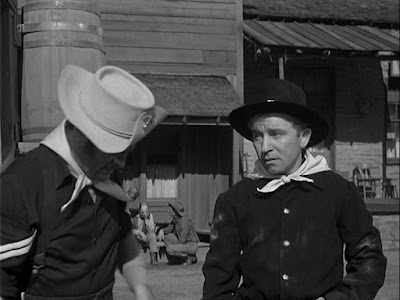 Wrongo isn't the only bad omen, though.  Hermione Gooderly arrives on that same noon stage, with the intention of opening a knick-knack shop and finding a fifth husband.  Turns out she has her own renoun as "The Happy-Go-Lucky Widow", with four previous marriages to servicemen.  Each spouse passed away within weeks of the wedding day, leaving a grieving(?) dowager in his wake.  Ms. Gooderly sets her sights on a quintuple with the Vice President of O'Rourke Enterprises, and that seven year engagement with Betty Lou quickly crumbles.  Can the Sarge keep his buddy from becoming the late Mr. Agarn? 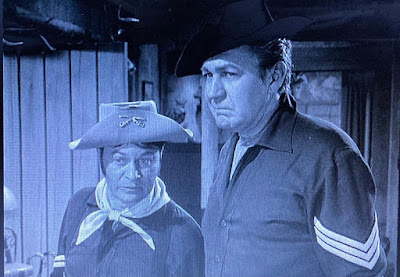 The first installment to follow the William T. Orr era at Warner Brothers (Jack Warner dismissed his son in law and placed greater authority with Hy Averback), Wrongo Starr and the Lady in Black gave us perhaps the show's best remembered guest star.  Henry Gibson's titular private has tales of woe (his horse died of chicken pox) to put HEE HAW's moonshiners to shame, and the already diminutive actor seems to sink lower with each disaster that follows him around.  Since Fort Courage already has plenty of malfunctions, it says a lot that there's a noticeable increase in Wrongo's presence.  Thoroughly defeated at the hands of an Indian curse, Starr is even more hopeless than the outfit he's joining. 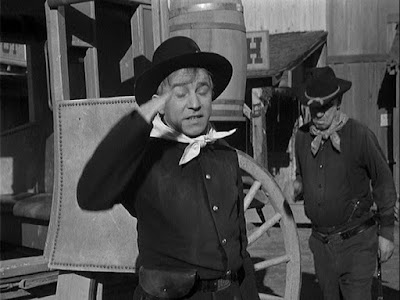 Starr's bad fortune dates back to an accidental shotgun hit during an Indian raid that "filled the medicine man's britches full of buckshot", resulting in perhaps the world's most effective curse pre-Bobby Layne.  To Parmenter's credit, Starr's new Captain doesn't shirk his new challenge, christening his new Private "Lucky" Starr in an attempt to boost Leonard's confidence.  But despite Parmenter's power of positive thinking and Wild Eagle's attempt to diffuse what he diagnoses as an Algonquin curse ("always overdress!") nothing seems to work, even temporarily, until Sergeant O'Rourke is forced into action.  Agarn isn't even deterred by the 29 day average for Hermoine's prior marriages or her request to honeymoon at the 2,896 foot Whopping Falls. 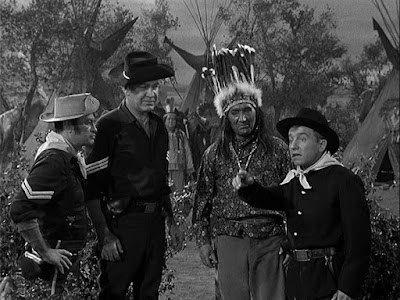 "I almost got married once, but my fiancee broke her leg.  Then she married the doctor."

Unsurprisingly, Wrongo's bad luck extends to his romantic life--that is, until the Sarge plays cupid (his reaction after springing the trap is priceless).  That confidence is suddenly fortified by temporary wealth and "special" wine and before you know it, the Private steals the Corporal's girl, marriage, wedding day AND honeymoon destination.  Starr's rungood doesn't stop there: he wins the fight with Agarn too! 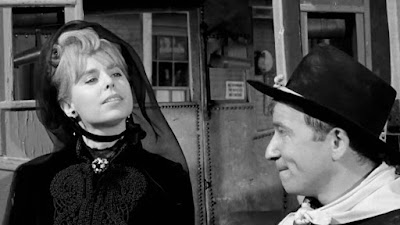 For all of the slapstick brought on by Leonard's mishaps, the Private hilariously never bears the brunt of it himself.  Both stage drivers end up with serious injuries as Wrongo comes and goes, but they might actually be getting off light compared to our regulars.  Wild Eagle gets blown up, Agarn gets soaked and concussed, and it goes without saying that the lookout tower doesn't stand a chance.  Through it all, the little man continually emerges physically unscathed, save for an off-screen blow to the head from a board that luckily breaks Hermoine's spell. 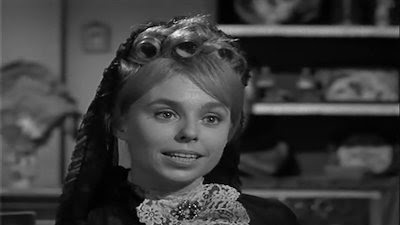 Speaking of, British born Tony nominee Sarah Marshall is an inspired choice to play the subtly psychotic four time widow, who leaves no doubt that she'll find a fifth Army pension soon enough.  Gibson's a genuine hoot throughout, and while Wrongo ends up in the medical corps(!) at episode's end, he was back in the cavalry a year later for The Return of Wrongo Starr. 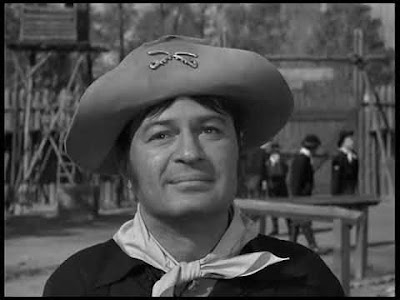 Betty Lou actually ended her engagement with Agarn during the tag of the previous week's Our Hero, What's His Name?.  Either our smooth Corporal managed to make up with her, or he's in denial, since they're together again this week and will remain so for the rest of the first season.  Though Hermoine got the proposal in seven minutes that Betty Lou's been waiting seven years for.  Wine's a hell of a drug?

When he learns of the concern over Ms. Gooderly's arrival, Parmenter is on the case:  "I'll give her one of my casual, yet penetrating cross examinations".  Hopefully not in front of men.... 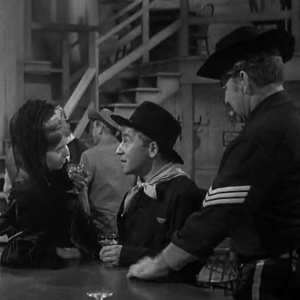 A treachery free segment for the Sarge--with Agarn's life at stake he has bigger concerns than money for once(!).  He does manage to rope innocent Janey into sending a fake telegram.

We are absent aphorisms this time around, but Wild Eagle does opine that Indian curses are "phony".  That's before he encounters our Starr crossed trooper.

Henry Gibson is right up there with the funniest of the show's guest stars, more than justifying his return visit.  There's the expected surfeit of slapstick caused by the accident prone Private but Drebin and Merrill also provide plenty of good lines.  Too bad Roaring Chicken was no longer around to try to break this curse, but even without him Wrongo Starr and the Lady in Black delivers typical first season goods. (*** out of four)