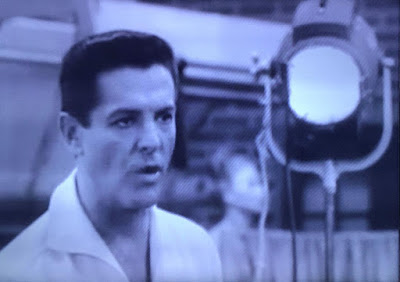 
Overview of LOVE THAT BOB a.k.a. THE BOB CUMMINGS SHOW is at this link


Bob's mentor Mason approaches him with an offer he can't refuse: photographing his studio's most important signee, beautiful Philippa Farnsworth.  She finds Mason's work lacking, so our shutterbug is puzzled by the request, since "Pappy" taught Bob.  Mason confesses that Bob's way with women is the real reason for the proposal.  Since Farnsworth is Bob's favorite screen siren, this one is right up his alley, correct? 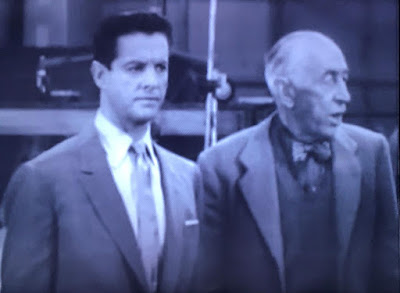 Believe it or not, incorrect!  Once Bob meets Philippa, he finds her to be overbearing, insulting, and abusive to all of her subordinates.  Collins promptly refuses the gig--which makes Bob the perfect man for the job in Farnsworth's eyes.  The temperamental diva goes off in hot pursuit, with 14 phone calls and cojoling of those closest to Bob (after a personal wooing doesn't work!).  Is Bob just playing hard to get to perfection, or is he really serious about telling one of the world's most delectable stars (physically, anyway) to take a hike? 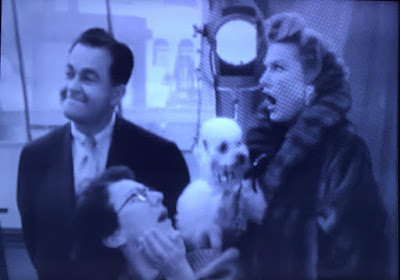 This early segment--only the fifth BOB CUMMINGS SHOW to air--finds that "way with women" already established.  Bob's skill with the ladies is Mason's entire rationale, and the playboy lives up to his billing by providing the only palpable opposing force Farnsworth faces.  Naturally, the diva finds the challenge irresistible.  Less than a month into its run, the lead character is mostly realized, but writers Henning and Manhoff (whose LOVE THAT BOB credits were sparse after the first season) are still working on the universe around him. 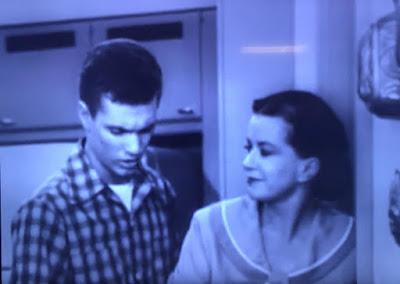 Bob's business isn't yet overrun by glamour girls: the only client we see in Bob Becomes a Genius is plane Jane Thelma, who seeks the Collins touch for her Lonely Hearts Club photos.   Schultzy therefore has nothing to block, and even assists Philippa in her efforts to get a foot in the door!   High school Sophomore Chuck wants to get near his Uncle's work, but isn't yet bold enough to crash the studio. Amazingly, Bob seems to have the only working bullshit detector in his home or office:  Collins is all alone in seeing through Philippa's histrionics and he also recognizes another actor piling it on while pretending to be a hoodlum.  While it stands to reason Bob would be at the movies a lot, he always seemed like he'd be too um, busy to notice the film onscreen. 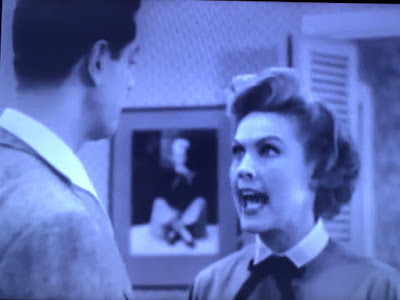 That's right, I did say he wasn't fully realized: Bob is letting the big head do all the thinking here, so to speak.  The veteran BOB viewer would think Collins is playing hard to get in an effort to score--but no, he really isn't interested in the job or any fringe benefits!  While this is due to Farnsworth's toxic personality, that character flaw doesn't stop our Playboy in the years to come: witness Eleven Angry Women, or more relevantly, his encounter with another temperamental actress in The Dominant Sex barely a year later to see the subversive sitcom LOVE THAT BOB would develop into.  In comparison to those efforts, Bob Becomes a Genius is remarkably conventional. 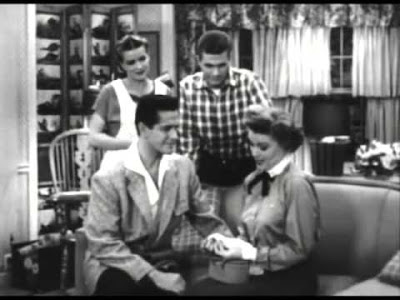 For example, Robbins is over the top, but there's miniscule--if any-- nuance for her to play.  While Miss Farnsworth is able to snow Schultzy, Margaret and (more predictably) Chuck, the mask comes off swiftly and violently with each rejection from Bob.  An overgrown Veruca Salt on the surface, Farnsworth does have fleeting lines indicating her insecurity at being a woman advancing in age (Miss Wyoming of 1937 before she catches herself, which would put her in her mid-30's) in an industry with clear double standards for the sexes. 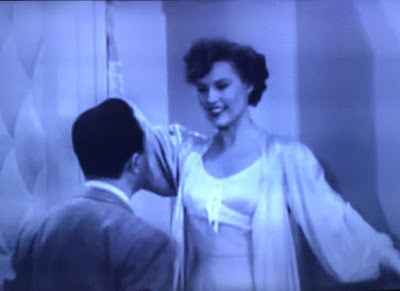 That said, you have to dig really deep to find any sympathy for Phillipa after witnessing her condescending and cruel treatment of anyone she finds beneath her.  Which--buttering up of Chuck ("the next Monty Clift"!), Schultzy and Margaret notwithstanding--is pretty much everyone.  Miss Farnsworth is given only two dimensions, but the writing of female CUMMINGS characters would improve dramatically just a week later: Shirl Gordon made her series debut with A Date for Margaret, the first of nearly 100 installments she would co-write over the next three and a half years.  Adding Gordon's perspective no doubt helped LOVE THAT BOB become the premier adult comedy of its decade. 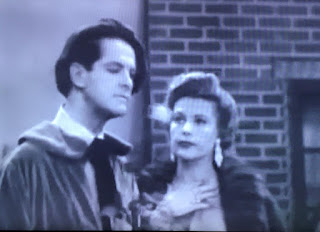 "She's just flesh and blood like the rest of us, Chuck,"
"Yeah, but look how hers is put together!"

Bob Becomes a Genius has a healthy number of hints at things to come.  Collins tells Chuck that's a line for a "high school freshman", then uses it himself later and subtly takes full credit.  Mason seems hopeful that his protégé can "tame" the star based on Collins' reputation, and he makes it pretty clear he doesn't mean the one behind the camera.   If Pappy had returned a year later, he would have found the Bob he was looking for.  As it is, he has to settle for one who would use his own theatrics to make Farnsworth finally appreciate the stable, experienced lensman she has.  Noble...but disappointingly normal compared to the oft-racy mischief we would become accustomed to.  Fear not: Bob Collins would become much hornier and funnier on a weekly basis soon after.


Voice acting legend Paul Frees gets a rare role in front of the camera as an actor coerced into playing a hoodlum to get Bob to acquiesce to the star's wishes.  It's a real treat to see and hear Frees (who gets to do his Bogart) for once. Thanks to frequent mislabeling on YouTube uploads, this episode somehow gets confused with Bob Becomes a Stage Uncle (I counted four of these on YouTube, including this colorized one!).  Don't believe the ImdB credits of the latter: Frees, Hausner, Robbins, Pasco and Wright do not appear in that fifth season entry, and only Frees returned to the series (in Grandpa Meets Zsa Zsa).  Speaking of Grandpa Collins, Mason as mentor was an idea that quickly vanished, once Cummings began playing that dual role in Grandpa's Christmas Visit. 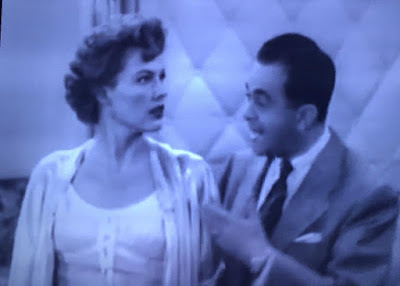 In a real rarity for Collins' world, no one. 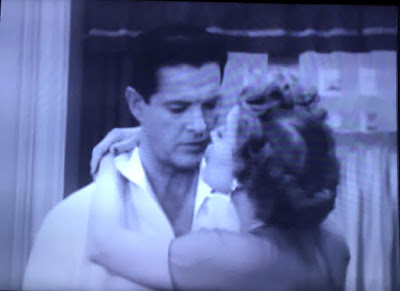 He didn't even try, which was even more of a rarity. 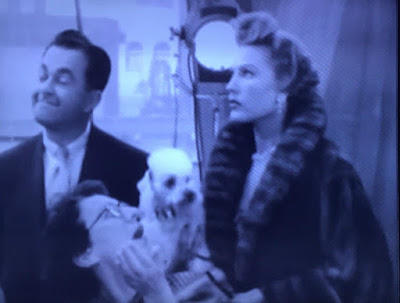 LOVE THAT BOB is still getting its legs here--come on, even half a season later and Bob would have been playing games and trying to get in Phillipa's pants (with Schultzy obstructing).  Despite jokes more typical of the blander sitcoms of its day Bob Becomes a Genius is acceptable, if unexceptional, and it is fascinating to see a long running show in its infancy.  For a great example of LOVE THAT BOB realizing its destiny early on, the third episode, It's Later Than You Think, is a riot that wouldn't be out of place two or three seasons later.  As for this one: (**1/2 out of four)

This one isn't colorized, but at least it is labeled correctly if you'd like to see Bob Becomes a Genius for yourself:

The reason people mislabel videos is to avoid losing said videos due to copyright issues. Oftentimes, they still lose the videos.

Good point Hobbyfan. In this case, at least 70 episodes had lapsed into the public domain as of 2005, one reason we will likely never see a proper series DVD release.

After reading your post, I pulled the colorized version and posted it at Saturday Morning Archives due to Paul Frees' appearance.