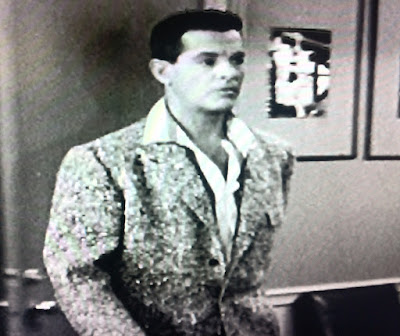 
After getting his jury summons, Bob Collins is set to use a flareup of "old war injuries" to get out of his $3 per day civic duty.  However, a glance at the newspaper causes him to have a change of heart, since he'll be in the pool for the high-profile Beach Bandit Case.  It seems that the young lady pictured with Bob below is on trial for a string of robberies along the sandy shores. 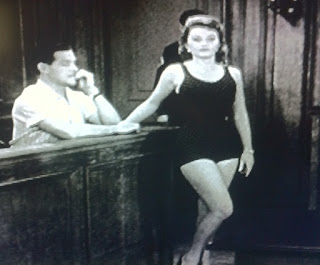 With a stated altruistic motive to see that "this innocent girl" gets a fair trial, Bob nevertheless faces a daunting challenge in being selected, since the D.A. understandably wants twelve females on the jury.  But somehow, our ace shutterbug (who says he mostly photographs "interesting structures") manages to convince the prosecutor that he will be impartial during the screening process.  Bob ends up being the lone male juror and (initially) the sole holdout for acquittal against seemingly airtight and damning evidence. 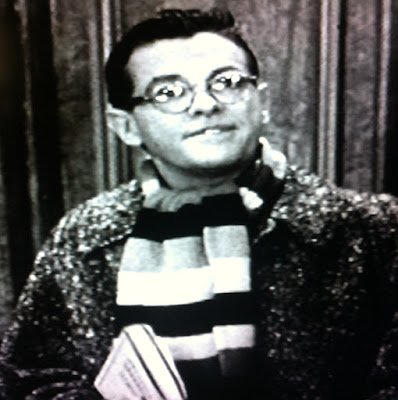 Bob Cummings won an Emmy as Juror # 8 in the 1954 Studio One production of TWELVE ANGRY MEN, so spoofing it on his own series was a natural fit.  The result is an enjoyable, if unexceptional outing, though Collins' selfish shenanigans seem slightly shadier than usual.  Can't mince words--Bob's goal is to free a kleptomaniac so he can sleep with her.  The now venerable Reginald Rose classic has seen dozens of sitcom variations in the half-century since, but the angle presented in Eleven Angry Women remains one of the most inspired of the takeoffs in concept.

Unfortunately, execution of said concept left something to be desired.  The main shortcoming of Eleven Angry Women has to do with the lack of any solid opposing force, with Deacon's hapless D.A. and Carson's passive judge completely steamrollered by Bob's gamesmanship.  In particular, the D.A. is not only easily outmaneuvered in court by Collins, but also by the Bandit, who is representing herself.  Some DA--Hamilton Burger probably has a higher winning percentage. 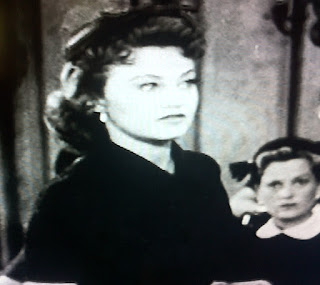 With the authority figures dispatched, Bob's fellow jurors are putty in his hands--all eleven of them, especially after the milquetoast turns back into a playboy once the trial starts.  Our silver tongued orator doesn't have a deliberation room adversary close to the level of the source material's infamous Juror # 3.  Collins' argument on the Bandit's behalf is mostly an emotional appeal for her canine companion rather than exposure of holes in the evidence (outside of wondering where she could hide the 'take').  With Bob in her corner, the defendant isn't required to demonstrate the ingenuity implied by her thefts in the courtroom.  Collins doesn't even face his usual hurdles from office or home: default blocker Schultzy is relegated to the peanut gallery, and sister Margaret (Rosemary DeCamp) and nephew Chuck (Dwayne Hickman) are both M.I.A. this segment.


Former Miss USA (and future Mrs. Jack Webb) Jackie Loughery gets to spend a considerable amount of screen time in her bathing suit, not an easy thing to arrange when most of the episode takes place in court.  She is appealing, but not exactly the femme fatale the role calls for.  Loughery made numerous TV and film appearances throughout the decade and returned to the series in season four's Colonel Goldbrick.  Bob's most effective foil is the civic-minded newsboy played by Tony Henning, the producer's son.  This would be the younger Henning's only screen credit.

Director Norman Tokar helmed a handful of third season episodes in between the transition of lead directing duties from Rod Amateau to Cummings.  Tokar (WHERE THE RED FERN GROWS) does a respectable job, but his specialty was more leisurely paced family humor--he directed 93 segments of LEAVE IT TO BEAVER and several Disney features. Like all LOVE THAT BOB outings, Eleven Angry Women has its comedic highlights: Collins being dressed down by the civic-minded paper boy; the abrupt end of Bob's "nerd" act in the courtroom, Harriet's canine accomplice and, of course, Harriet demonstrating the lack of hiding places for the loot.

As noted above, no one, at least effectively.

He certainly had it all set up, but after the trial, he appeared to have changed his mind before anything happened.  Puzzling, especially the reason.  I mean, what did you expect from a thief, Bob? 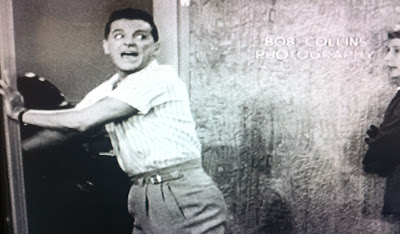 Some funny moments as always, and Cummings is having a great time spoofing his most famous dramatic TV role, but the lack of solid opposition keeps Eleven Angry Women from really scoring.  It's just way too easy for our playboy this time.  In the end, a mediocre outing that coasts as far as it does on the star's shtick and Loughery's wares.   (** out of four) 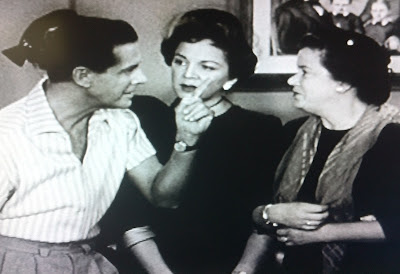 Eleven Angry Women is included as an extra on The Official Collection DVD release of Cummings' 1964 series, MY LIVING DOLL.