Film Review: CLEOPATRA JONES AND THE CASINO OF GOLD (1975) 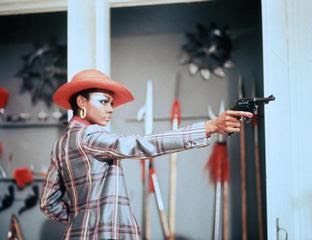 
U.S. agents Popwell and Kenyatta are missing in Hong Kong following an unsuccessful sting on ruthless, drug-dealing lesbian casino owner Stevens. Dobson's title character arrives to investigate, with nominal assistance from government superior Fell and more substantial help from sympathetic local Tanny. Once Dobson realizes who's behind the disappearance, she plots to turn the tables on Stevens, but it won't be easy--she's rich, powerful and an expert with a sword. 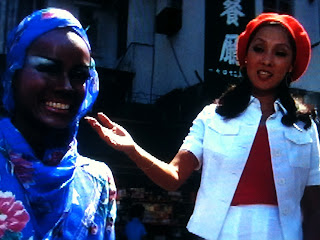 The second and (sadly) final CLEOPATRA JONES has, on the surface, much in common with the classic first film. Once again we have a blonde lesbian drug lord (though Stevens is a lot easier on the eyes than Shelley Winters) for Cleo to battle while she's working overseas to undermine the drug trade in the United States. Dobson, Popwell and Kenyatta all reprise their roles, and Dobson continues wearing outrageous 1970's fashions and displaying proficiency in martial arts.

The change to the sexier but equally campy Stevens as villainess is only one indicator of an increase in the Bond influence and a lighter tone this time around. Max Julien is out and William Tennant takes over full writing duties and there's no scene as gritty as the first film's disturbing portrayal of withdrawal symptoms. In addition, J. J. Johnson (SHAFT, TROUBLE MAN, THE FUZZ BROTHERS, WILLIE DYNAMITE among others) is out and western/TV specialist Dominic Frontiere (BARQUERO) is in as composer, and the theme song "Playin' with Fire" sounds nothing like the typical soundtrack for a Dobson (or Grier, or Williamson...) film. CASINO OF GOLD feels more like a Run Run Shaw production (he co-produced with Tennant) than a blaxploitation entry and if not for Dobson's presence, this one likely wouldn't get lumped into the genre at all.

Not to say this is a bad film, not at all---just an odd duck. I'd estimate it at 2/5ths Bond, 2/5ths Shaw and 1/5th blaxploitation. It's still a lot of fun to see Dobson being such a wiseass to everyone (especially Fell) and there are nifty action sequences on a ship, in the titular casino, on a deserted street and inside Tanny's apartment. Just be sure to suspend your disbelief a few times: I can't understand why Tanny would leave her door unlocked and open before taking a shower (she and Dobson have been followed already!) and the 'insurance' that Popwell and Kenyatta take with the money seems like overkill to me, for starters. 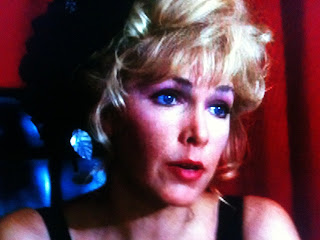 Dobson's clothing is always a highlight, but the gorgeous 6'2" model isn't looking quite as foxy as she did in the first JONES---too much unnecessary silver eye shadow IMO. The actress did her own makeup according to the credits, so Cleo isn't perfect. Still, Dobson winks to the camera almost as effectively as Roger Moore and seems to be having a lot more fun with the role the second time around. It is a real shame that Dobson didn't have the opportunity to star in a third JONES adventure. But with this film, FRIDAY FOSTER and SHEBA, BABY all disappointing at the box office within a few months in 1975, Dobson and Pam Grier were both back in supporting roles in their subsequent features.

Dobson never did nudity, and pushed for a reduction in sex and gore in her films, so CASINO OF GOLD doesn't quite have the titillation factor of Pam Grier's films. Coincidentally or not, all of Grier's 1970's AIP-ers are out on DVD, with 3 available in the "Fox in a Box" set. In addition, Cleopatra doesn't even have a boyfriend this time out, so all exploitation elements are left to the "adopted daughters" of Stevens, in brief scenes as they attend to the needs of Popwell and Kenyatta.

A rather ambitious mixture of genres exploring the global nature of Ms. Jones' job, CASINO OF GOLD was misleadingly promoted as blaxploitation when released, which may have contributed to subpar box office returns--the genre was fading commercially by 1975.

The first CLEOPATRA JONES film is slightly better IMO, but they should both be on DVD for sure. Dobson is no Pam Grier in terms of acting ability, but she is charismatic and statuesque, and her only two starring vehicles should be widely available--though the 1973 original is out on DVD, it's not easy to find. 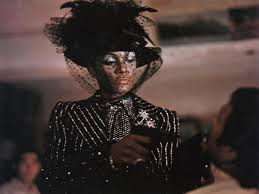 It's just too easy to picture this one on Wal-Mart shelves as part of a "2 for 1" with the first CLEOPATRA JONES. I mean, why hasn't this happened yet? Come on!

The out of print VHS is full screen only, and this unique, exciting film could use a widescreen digital remastering.


It's a lot of fun to see: Stella Stevens' camping (Shelley Winters was over the top in the first film; Stevens is a big improvement); Norman Fell giving us an early version of the 'Fell Take' at the conclusion of his first scene 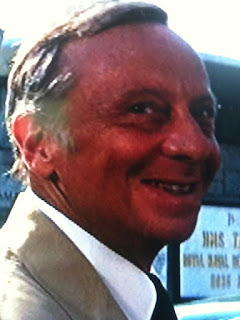 and further foreshadowing his immediate future by playing a character named...Stanley; and Dobson's wisecracking, particularly in the casino scene, in which Cleo tells the intrigued Stevens what brought her there: her "beautiful money!".
Posted by Hal at 11:14 PM

Max Julien supposedly created the Cleopatra Jones character with then-girlfriend Vonetta McGee in mind, although the producers had their hearts set on supermodel Naomi Sims playing the part. They flew Sims to L.A. to read the script, but she was so deeply offended "by what she perceived as the script's distorted images of Black people" (quoted from her official website) that she turned the part down on the spot and then wrote a blistering letter of complaint to Warner Brothers. Dobson, also a hot model at the time, accepted the part only a couple of weeks before shooting was to start.

CLEOPATRA JONES AND THE CASINO OF GOLD was originally titled CLEOPATRA JONES MEETS THE DRAGON LADY and I could swear I once read someplace that Noel Nosseck was the first director assigned to the project, but I can't find my source so take that with a grain of salt. Don Medford started the picture and was replaced by Chuck Bail.

Ron Goulart wrote novelizations of both CLEOPATRA JONES movies. I haven't read the CLEO/CASINO OF GOLD book, but the first one is from an earlier draft and is very different in spots.

Nice info in this post, thanks for your advice. This is a great information for me.
If you need more information about the best online casino guide, please visit my blog.

Playing Poker is a highly famous game in the world of casino.It's up to your strategy how you will control your game and gain lots of chips.You can find it in Jeux Casino.From the French word Jeux which means games.

Had a nice 2.35 widescreen region 2PAL DVD of CLEOPATRA JONES AND THE CASINO OF GOLD in the UK. Hmm-mmm.

Well, thankfully this one is available as a Made-on-Demand disc from the Warner Archive now - and I'm looking even more forward to it now!

Craig: glad to hear it. I have the same Warner Archive disc; was really glad to see this one get released. Warner Archive Instant also has Tamara's comedy from 1976 with Redd Foxx, NORMAN...IS THAT YOU?