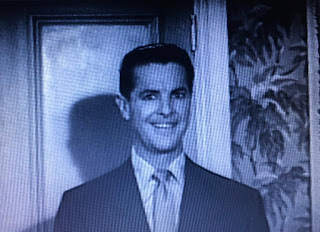 Introduction to the LOVE THAT BOB/THE BOB CUMMINGS SHOW episode guide at this link.

Margaret is fit to be tied after Brother Bob blocks her daytime beach date with Paul Fonda, the latest interference in his sister's love life under the guise of protecting her from the "wolf".  Fonda wonders what would happen if the shoe were on the other foot and enlists beautiful starlet Kay Michaels to pose as his sibling. 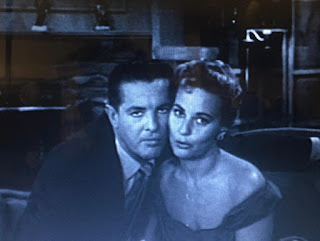 And so an "accidental" meeting is set up outside Bob's studio in which Kay sprains her ankle, allowing the Wolf of wall snapshots to play doctor inside.  And, he hopes, doing it that night as well.  Little does our Air Reserve Colonel know that he's walking right into Fonda's trap--which will be sprung inside the Collins household! 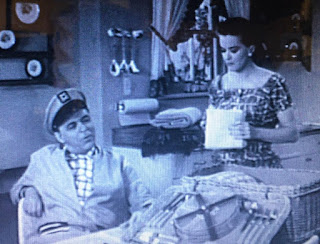 Lyle Talbot's sixth appearance as Paul Fonda sees Bob's old WWII comrade finding a way to fight back against those "Wolf" accusations.  After insisting (to no avail) that he's changed (in future episodes, we learn that's debatable), he cooks up a hilarious scheme to give Bob a taste of his own overprotective medicine.  In the process, Bob Meets Fonda's Sister introduces Kay Michaels for a four-segment arc as the newest object of the Playboy shutterbug's desire. 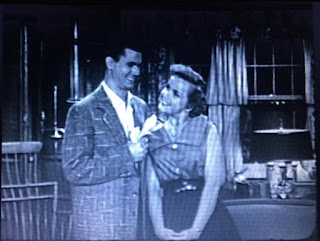 Michaels turns out to be more than just that, though--the aspiring movie starlet becomes the strongest contender to date to get Collins to the altar.  One can see that extra "oomph" in Bob's efforts to woo her, and all that experience in the cockpit pays off--he stays silk smooth all the way up to Fonda's shotgun search.  For her part, Kay Michaels plays her part in the plot perfectly.  Is it any wonder she ends up breaking into pictures?  Method or not, the instant mutual interest is palpable: there's no condescension when she plays hard to get. 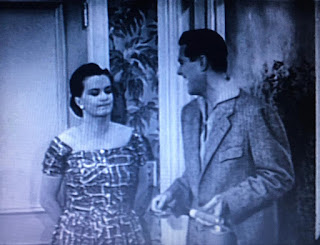 For his part, Bob lives up to his reputation, making nary a wrong move pre-date at home or the office.  Kay continually moves up the intervention time once she gets a whiff of Bob's cologne.  Speaking of, Moustache (yes, it was around way back in 1955!) gets one Hell of a plug here, with Ms. Michaels' full approval followed by Margaret's, and finally Francine's--Uncle Bob's fragrance choice even helps young Chuck onto a smooth movie date. 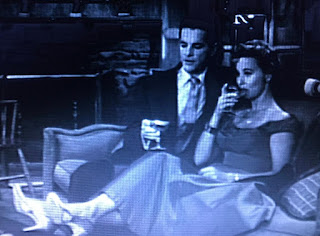 Ultimately, LOVE THAT BOB is its subversive self once again in the end.  Bob's comeuppance?  That date with Kay, starting circa 10:00 P.M., with no interference at all from any of the usual suspects.  If Fonda was trying to teach Bob a lesson, fixing him up with a gorgeous aspiring actress/model might not be the most punishing lesson, you'd think.  Oh, and if it was 4-D chess to get our loverboy married off, that didn't work either.  Too bad, Paul. 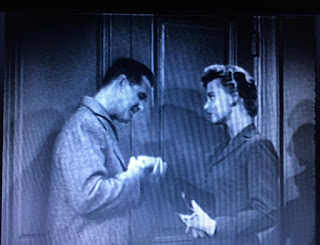 Bob--blocking Margaret, again.  Worry not, she would soon be paying her brother back in episodes to come.  Bob had little resistance in wooing Ms. Michaels--at least, in this installment.  Schultzy is surprisingly subdued in the office, letting the entire Collins sales pitch proceed and only calling him to work when Kay is gone.  Pining for the Boss but not aggressively---yet. 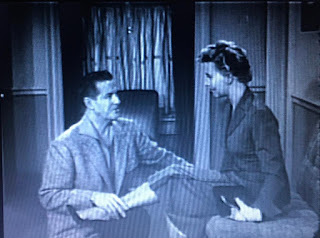 With Kay?  Eventually, I'm sure.  Hell, she almost got a proposal eventually.  He was well on his way around the basepaths throughout Bob Meets Fonda's Sister, with unimpeded progress before and after being the butt of Paul's joke. 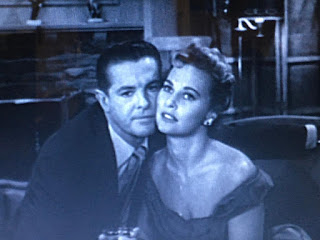 Lola Albright's popularity on the series kept her recurring for the next two seasons; Kay Michaels was her signature TV role before PETER GUNN came along.  Her chemistry with Cummings stayed strong through seven appearances in all, through Bob Calls Kay's Bluff.  As always, Talbot is a fine foil, and the clever Henning-Manhoff script is one controlled, consistent burn throughout.  Unfortunately, the denouement fizzles slightly, with the theatrics muting the payoff and Bob (as usual) not really getting that much of a comeuppance.  Still, Bob Meets Fonda's Sister provides more than enough hilarity to overcome a wobbly conclusion.  (*** out of four)