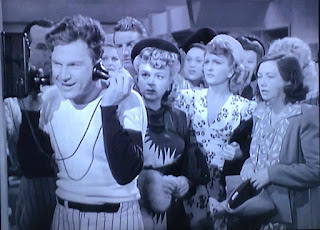 
Sox pitching ace Eddie Albert has unparalleled stuff on the field but an Achilles' heel off it--women.  Yep, when his, uh, libido goes up, his ERA rises with it.  Enter War Bond selling film star Velez, who successfully raises $300 from Albert alone.  Albert predictably gets shellacked in his start, but Sox owner Cowan sees a great publicity opportunity in the Albert/Velez relationship and arranges for Velez to accompany the team on a road trip. 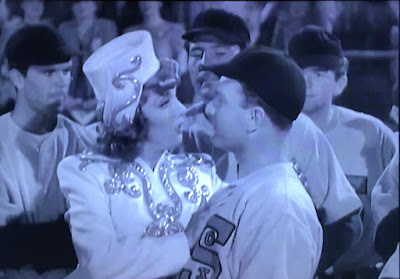 While Cowan is thrilled, the wives of Albert's teammates (Barclay, Adrian, Kelly) are not.  Baer's wife Kelly plots to keep the celebrity couple apart for the sake of the team's on-field success--after all, the wives all want that World Series share at season's end.  The separation is to no avail, as Albert and Velez elope, initiating a horrific losing streak for the ace that puts postseason hopes in jeopardy.  Velez accepts a starring role and Albert rebounds in her absence, rallying to lead the Sox to the pennant.  Alas, the production wraps just before the World Series, and the united Sox wives resort to kidnapping Velez for the duration of the Fall Classic. 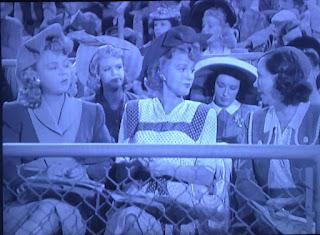 Ostensibly a baseball film, the title of LADIES' DAY tells the true tale: on-field action is infrequent, and the Sox players take a backseat to their bonus-hungry spouses.  As you might expect from the cast list, Adrian and Kelly are the sauciest and sassiest of the group.  Both talk tough, but I'd give the edge to Kelly, since she's keeping the burly Baer in check on and off the diamond.  As Albert's catcher, the former heavyweight champ is a surprisingly intimidated hubby.  In a film needing a few sparks, casting Baer against type helps. 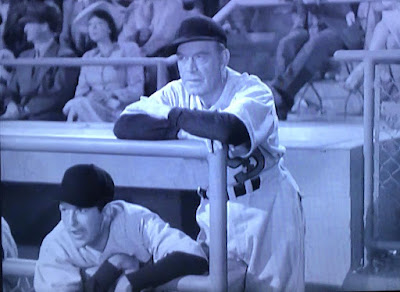 Albert smiles a lot in a role obviously inspired by Jerome "Dizzy" Dean (he's called "Wacky" Waters, so no one in 1943 would have missed it).  Unlike Dean, his great talent can't overcome his antics. Albert becomes a Wild Thing on the field once he's doing the wild thing off it.  Manager Clark is joined in his irritation by the hard-boiled wives of Wacky's teammates, another welcome play on our expectations. 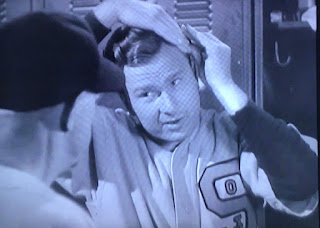 Such fleeting inspiration occasionally gives hope that LADIES' DAY might be that forerunner to BULL DURHAM: a chick flick that also works as a baseball movie.  Alas, the action on the field is very cheap looking, and Albert's chemistry with Velez is lacking.  He excelled at exasperation but the ladies don't leave any for him, and the "love at first sight" bromide is the only explanation for the immediate attraction with his spouse-to-be. 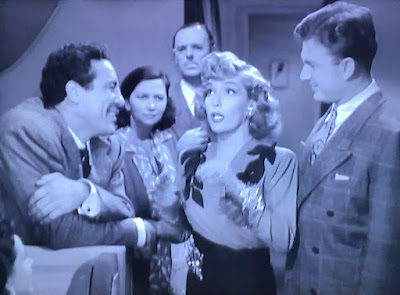 But, really, we're watching this one for Lupe, and while she has her moments, this just isn't as good a vehicle as HONOLULU LU despite that film's shortcomings.  She was onscreen virtually the entire time in that fun flick, but she's offscreen for several stretches of LADIES' DAY and plays a sympathetic, but naive starlet here.  The role keeps the Velez we know and love under wraps for two-thirds of its runtime.  Until then, Iris Adrian and Patsy Kelly overshadow Velez--by the time she outmaneuvers her captors, LADIES' DAY is almost over.

Lupe's complete lack of baseball knowledge coupled with rapid interest in her husband's sport is good for a few laughs, as is her interaction with the much tougher mates of Albert's teammates.  But in the end, LADIES' DAY is just an agreeable time waster with a screen legend who admittedly is always a fine choice to waste that time with. 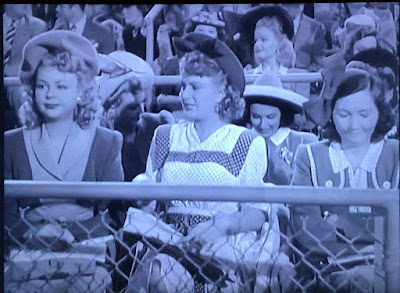 Should be, since Warner Archive has put out many RKO features from the period including Velez' MEXICAN SPITFIRE series' box set.  This obscurity flies under the radar.

WHY IT SHOULD BE:

See above.  One of Lupe Velez' final films before her untimely death.  While not one of her best, it is worth seeing for her, Adrian and Kelly.  And Max Baer's intermittent antics.  LADIES' DAY airs occasionally on TCM.
Posted by Hal at 4:23 PM

Why didn't we see more of Eddie as a ladies' man between this and Green Acres?

FWIW, this is a rare instance of Velez w/o Leon Errol. Whodathunk?

Also FWIW, Tom Kennedy (not to be confused with the game show icon of the same name) was the third part of the RKO shorts rotation in syndication with Leon and with Edgar Kennedy back in the 70's, but isn't remembered quite as fondly for the reason I have noted. What say you?

Yeah, Eddie didn't get that many leads, did he? Always seem like he was the best friend of the lead.

Lupe did make 9 films with Errol, quite a few. A lot of leads without him in the pre-Code era though. She was always delightful and they were great together. I'm hoping to track down all of her non-Spitfire leads for Columbia and RKO in the 1940s eventually.

Tom Kennedy kept popping up in Errol's shorts and features too. Amazing that he worked into the mid 1960s!

The term "ladies day" seems to have changed quite a bit since then lol.