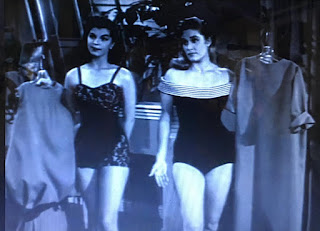 "Hold it!  I think you're gonna like this picture!"


Introduction to the LOVE THAT BOB/THE BOB CUMMINGS SHOW episode guide at this link.


Aided by flashbacks from Grandpa Clobbers the Air Force, Chuck MacDonald gives mother Margaret a quick recap of that installment's conclusion.  After being rejected as too old to serve when he volunteers to return to reserve duty, Bob's eighty year old grandfather Josh dropped homemade apple cider bombs on the Air Force from his old Curtiss JN-4 "Jenny".  Unfortunately, reserve Colonel Bob Collins and nephew Chuck were visiting the base at the same time as that embarrassing raid, with Chuck escaping in the confusion.  Uncle Bob wasn't so lucky: he's being held in the brig for Grandpa Collins' crime of setting "Old Ramrod" General Tallman's career back five years. 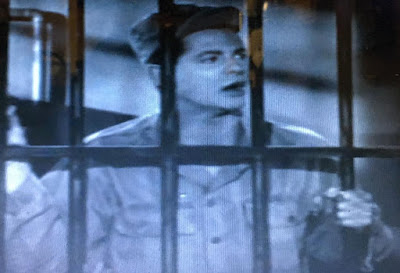 Incommunicado with the outside world on Tallman's orders, Bob desperately tries to extricate himself from behind bars and get a message back to his office and all those waiting models.  Back at the studio, everyone naturally thinks Bob is late for more conventional reasons, and an exasperated Grandpa initially refuses to fill in for the "irresponsible young 'un" at the studio.  But after a gander at Bobby Boy's assignment for the day, Grandpa decides that blood is thicker than water. 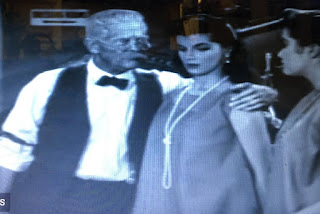 Grandpa Clobbers the Air Force builds methodically to its titular climax, and Bob in Orbit shows the aftermath--which is surprisingly the wilder half of this two parter.  Grandpa's makeshift explosives didn't leave any casualties outside of a one-star General's pride, but leaving Bob's immediate superior red-faced is arguably more offending.  The imprisoned Colonel doesn't help his cause with complaints which are turned into inadvertent suggestions by Old Ramrod. 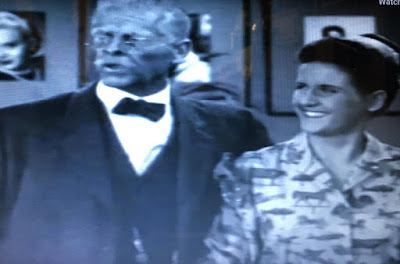 "Colonel Collins, I will rectify that immediately!"

Bob in Orbit isn't all punishment for the Sins of the (Grand) Father.  The sack dress gets an amusing ribbing in this peppery Henning-Wesson script, and while Bob is shackled in front of the camera, the episode's eponymous star is exuberantly free behind it.  Director Cummings runs with the frequent cutaway gags and gleefully embraces the recurrent rear projections required by the increasingly degrading and exhausting indignities for Colonel Collins.  All are silly but some are inspired: getting the Colonel up a telephone pole is my personal favorite, but Bob's heretofore unseen ability to operate a jackhammer is the biggest surprise. 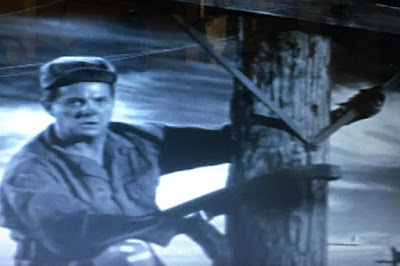 "Sacks is for potatoes, not tomatoes!"

With Bob in the hoosegow, Grandpa's the only available substitute for him at the office.  Josh has gotten the hang of modern camera equipment since Grandpa's Christmas Visit, and proves once again that the apple didn't fall that far from the tree.  Snapping Collette and Peggy in the aforementioned Givenchy dress is just too unrevealing for the spy octogenarian, creating arguably the best sight gag in a segment brimming with them.  Grandpa's insistence on keeping the young lovelies from "lookin' like flappers" saves Bob in Orbit from being cheesecake-free, a description you just wouldn't want a LOVE THAT BOB to have.

The most questionable fit is Bob's insistence on a cigarette, since we never saw our shutterbug smoke in any of the 141 episodes prior. While the payoff is necessary to provide Tallman's justification for Collins' continuing captivity, it can't help but feel strained--particularly to fans familiar with the star's vocal anti-smoking advocacy off-camera.  Hell, Cummings wouldn't even light up for the show's Winston commercials!  Still, he proves his commitment to the bit by actually inhaling, giving us witness to something truly rare. 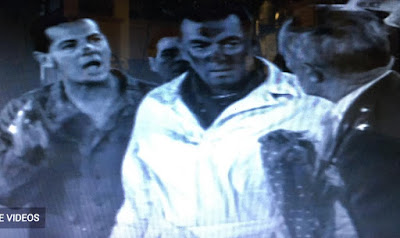 "Have you any idea what it feels like to be a sitting duck for ack ack in a bundle of bailing wire??"

In the supporting cast, real life Major General Clarence A. Shoop (Colonel Goldbrick) makes another appearance (Shoop was a longtime friend married to frequent Cummings co-star Julie Bishop); Lisa Gaye is joined by Lisa Davis instead of Joi Lansing modeling the dresses, and could there be more perfect casting than John Hoyt as an officer nicknamed Old Ramrod? 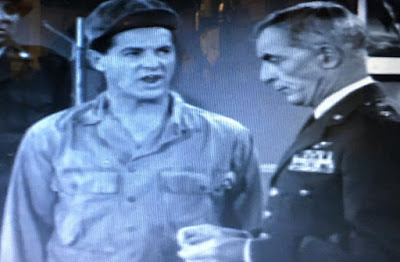 Outside of the cancer stick contrivance there's one other minor flaw that is beyond anyone's control:  Bob in Orbit is comedically enhanced by viewing Grandpa Clobbers the Air Force first.  Alas, part one doesn't appear to be on YouTube and the conclusion has been uploaded multiple times, so Bob in Orbit is ubiquitous while its prequel is very hard (but not impossible) to find.  Just one more reason for a specialty company (Shout! Factory, I'm looking at you!) to pick up the baton from Shokus Video Catalog and give us a remastered release. 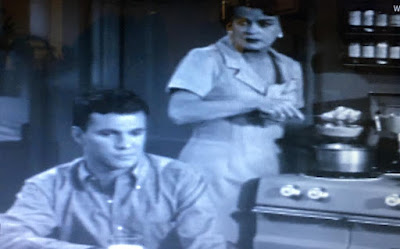 Bob in Orbit is an anomaly for the series: Bob dangling sex in front of army Joes to no avail, this is one episode in which he simply can't win, despite good intentions (for once).  On one level, you could present it as proof that long-running series have always been susceptible to becoming cartoonish in their old age.  But within the context of a series that was so subversive for its time, straightforward slapstick is actually unconventional. 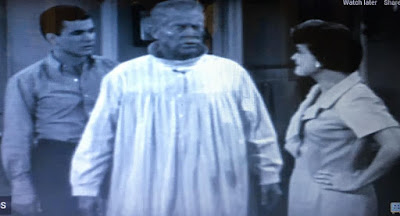 General Tallman and the married Air Policeman couldn't be swayed by Bob's insinuations of hot model hookups.  However, the Sarge appeared willing to be a buddy in exchange for the leftovers. 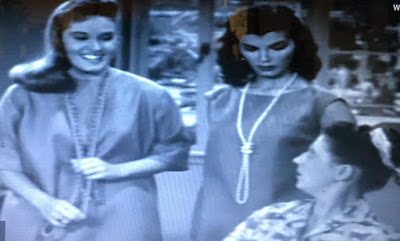 Briefly getting his arm around a literal "filly" is as close as Bob gets to the opposite sex.  Penal labor keeps our playboy from penile pleasure. 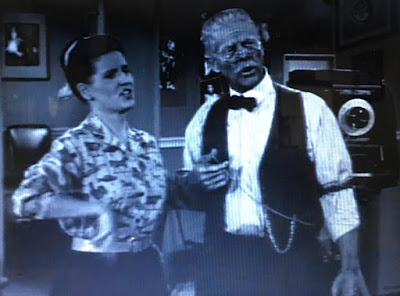 Far less swingin' than we're used to from Bob (and BOB!) and much more slapstick but plenty of belly laughs despite the silliness.  Bob in Orbit is funnier if you're lucky enough to see Grandpa Clobbers the Air Force first, but it's one of the winners from the scattershot final season regardless.  Cummings keeps the absurdity coming fast enough that you can swallow a contrivance or two.  (*** out of four)

Thanks to the aforementioned Shokus Video Catalog, both Grandpa Clobbers the Air Force and Bob in Orbit are available on DVD (the latter is curiously re-named Bob in the Brig, on Volume 5, while the former is on Volume 4).
Posted by Hal at 8:51 PM