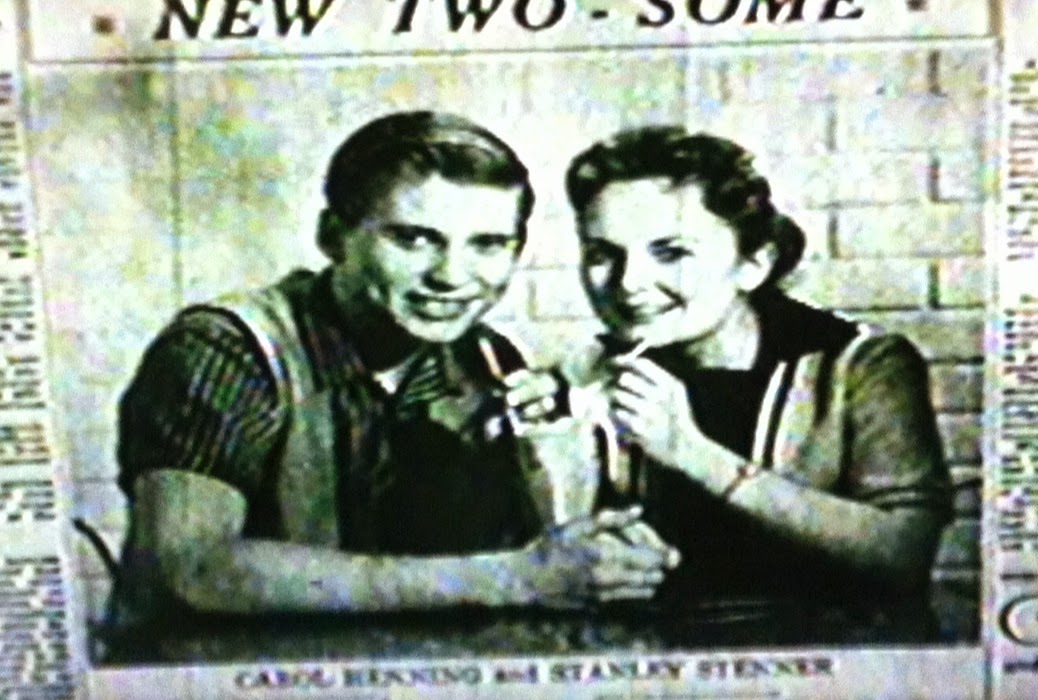 Chuck is reeling from the loss of best girl Carol to rock n' roll singer Stenner, a blow with additional pain inflicted when the coupling makes the front page of the campus newspaper.  Margaret calls on Uncle Bob the romance expert to help his lovelorn nephew, but her brother can't be bothered.  Wearing his Air Force uniform, the still active reserve departs for a "top secret" photography assignment with the head of S.A.C.  Obviously, Strategic Air Command takes precedence, right? 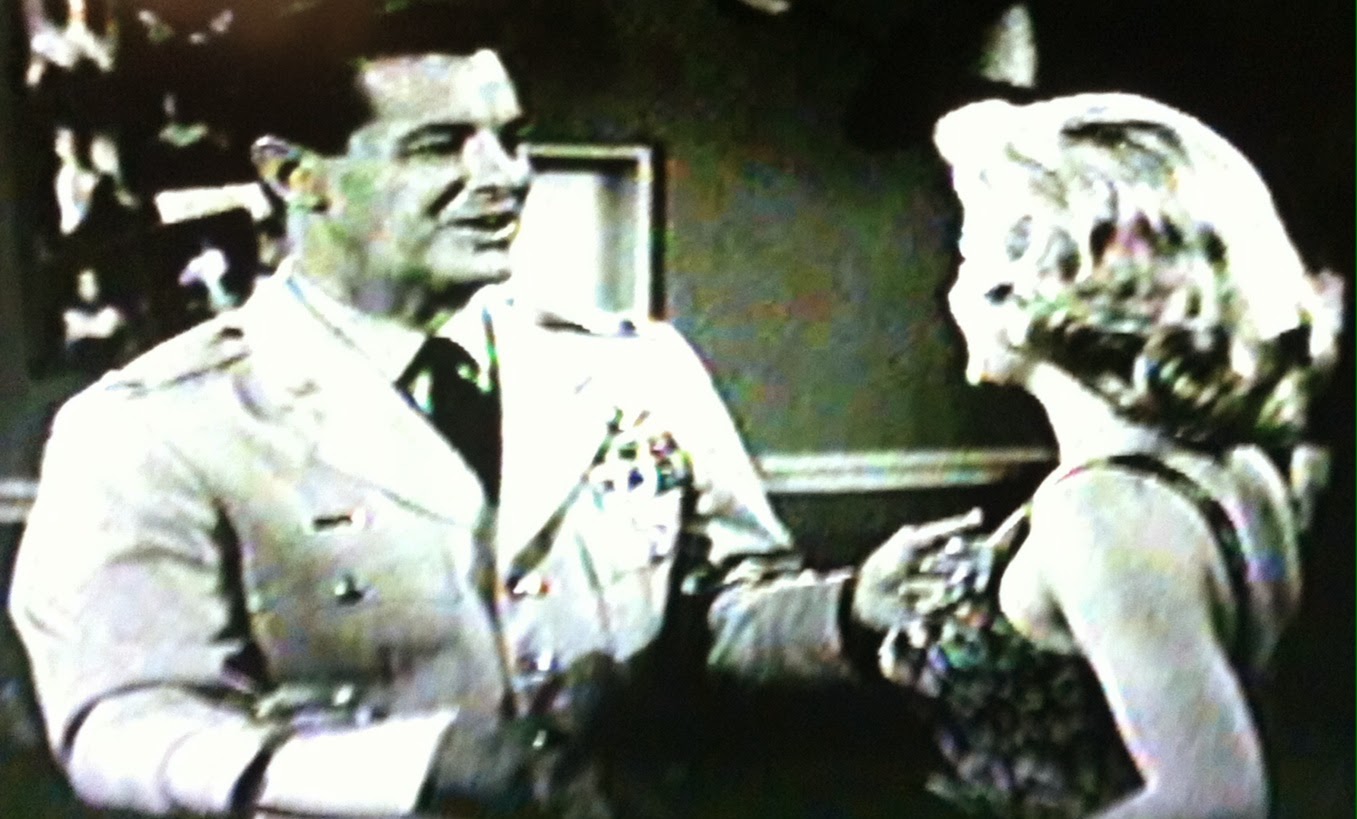 However, you guessed it: Colonel Collins hasn't been summoned by that S.A.C.  Instead, he's photographing a bathing beauty from this one: 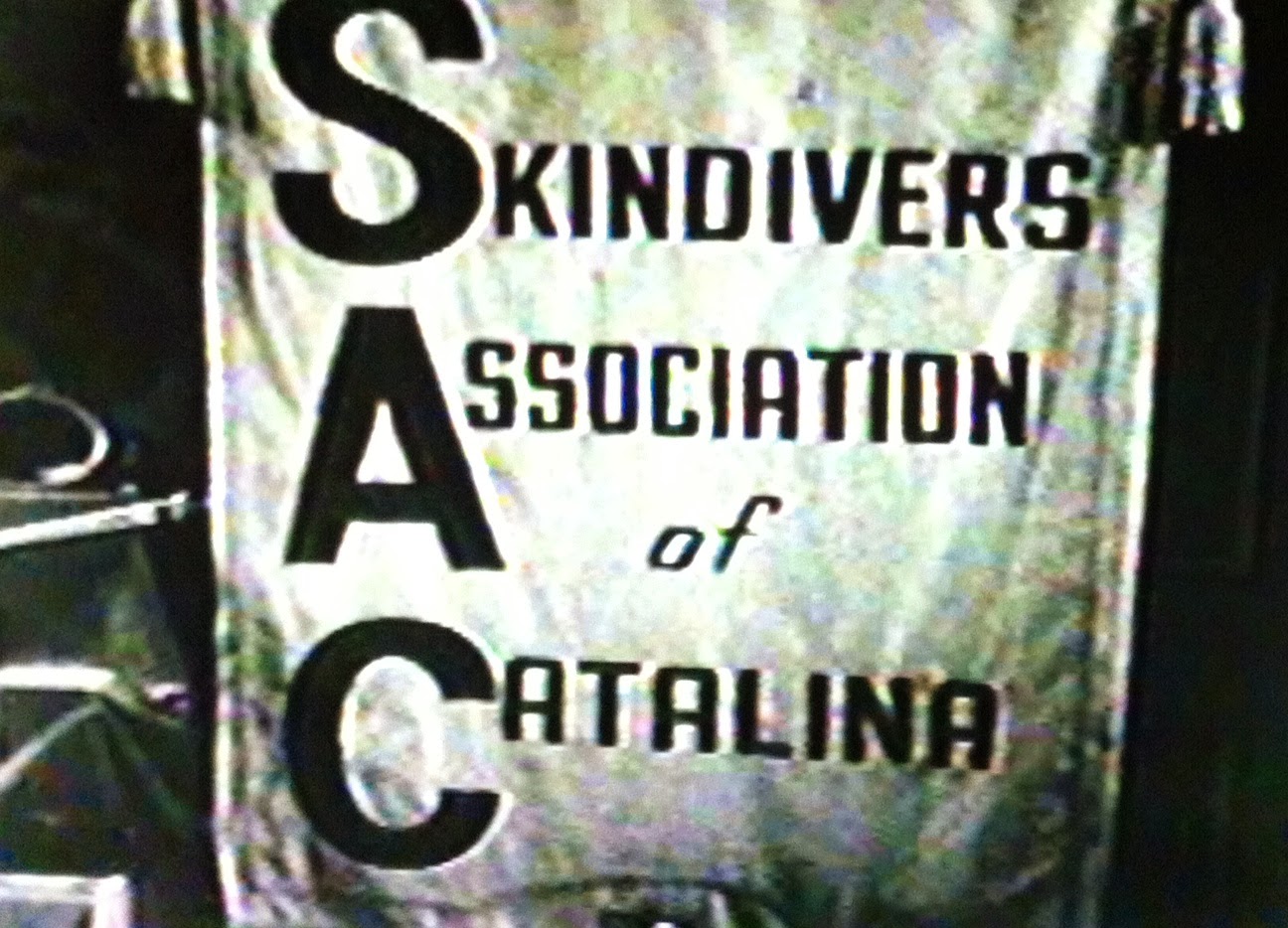 And of course, he's wearing the officer's duds to impress blonde Jenny, S.A.C.'s leader and fundraiser.  When Margaret discovers the real reason that Bob can't stay and aid her moping son, she schemes with commanding officer Shoop to give him a genuine Air Force assignment--in Greenland!  Bob immediately cooks up an explanation involving yet another organization with the same acronym, but can the Colonel put one over on a Major General?

Colonel Goldbrick is one of several installments to debunk the two most repeated myths about LOVE THAT BOB: a) that aging playboy Collins is ludicrously presented as irresistible to women twenty years his junior while b) the budding youth revolution is completely ignored on the show. 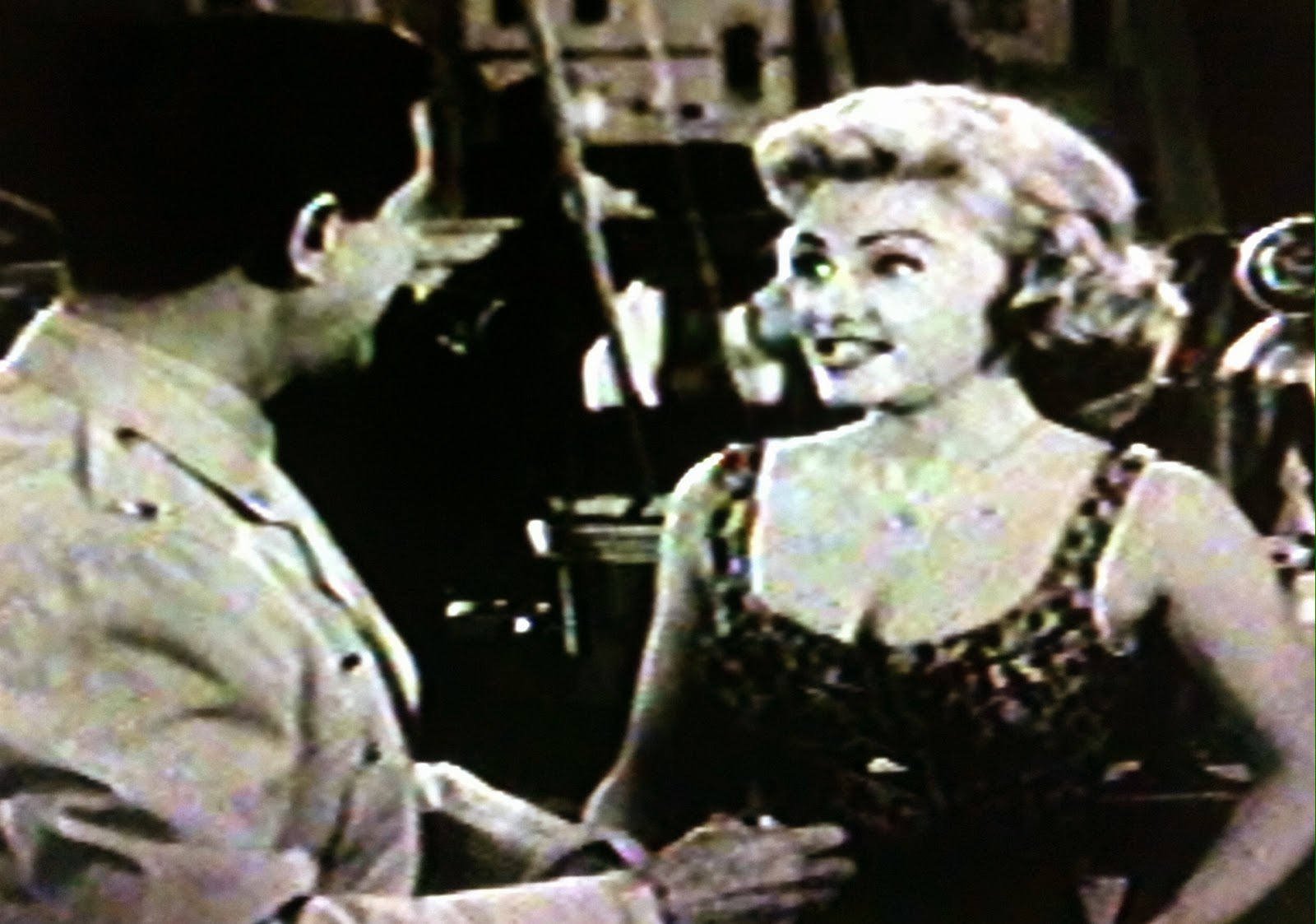 Granted, Collins does have a bevy of beautiful young models thinking he's the cat's meow (Shirley Swanson, Collete DuBois), but as one of L.A.'s top photographers, Bob is in a position to further a model's career--not unlike his obvious role model, Hugh Hefner.  It makes perfect sense for Bob to have heightened attraction in the eyes of a professional model, particuarly if she's marriage minded and likes a challenge--single, successful Bob is a nice prospective catch to a young lady so inclined.

However, the considerably younger Jenny (played by Loughery, Miss USA in 1952) is neither a professional model nor aspiring to be one.  She appears somewhat attracted to Collins, but in a way that exudes more respect than arousal.  Bob hasn't a chance with her or the other divers once he introduces the ladies to the hip rock n' roll singer their own age, obviously underestimating the appeal of the guitar and voice to the next generation.  The members of S.A.C. (who would have been in grade school during Colonel Collins' war heroics) can resist a man in uniform, and it's Stenner who ends up walking away mobbed in admiration by the entire club. 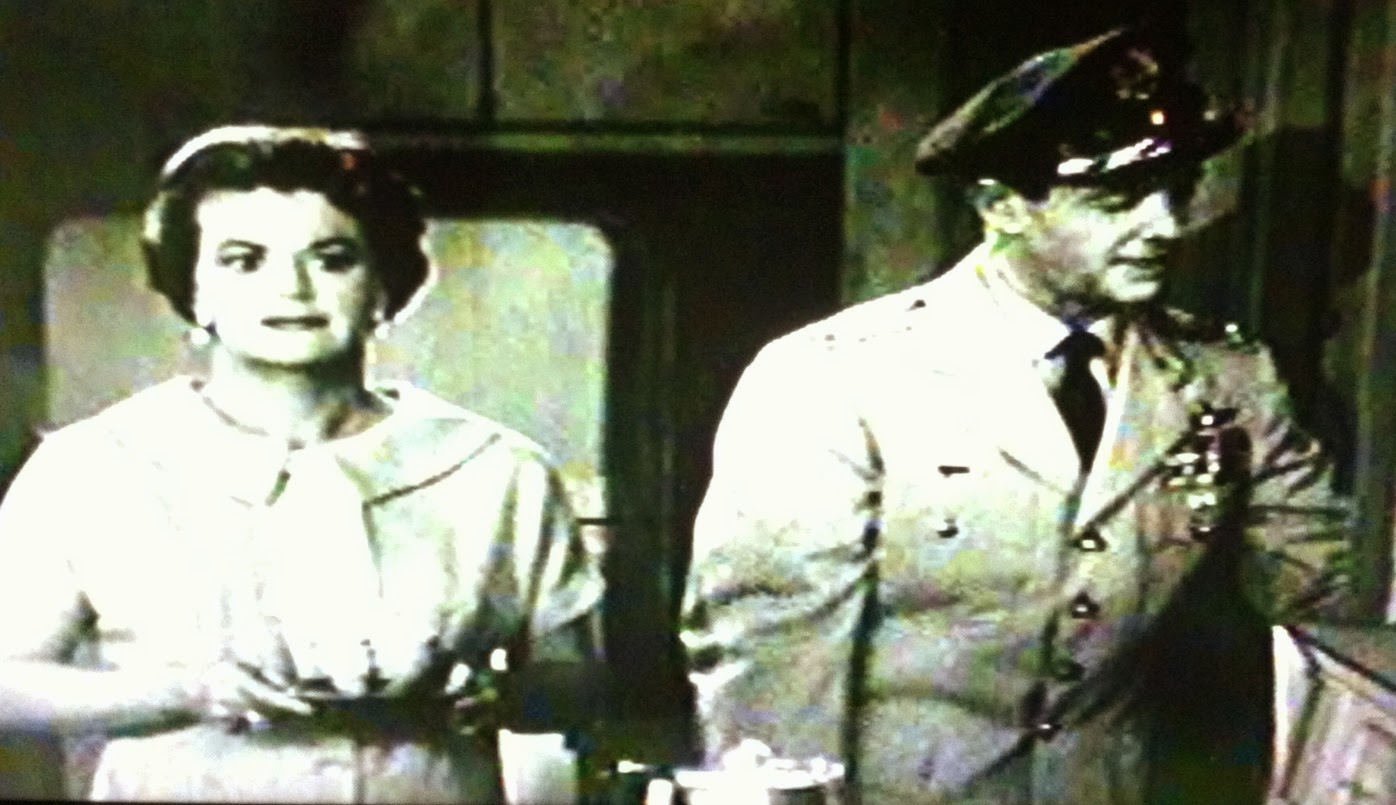 Speaking of that uniform, Bob atypically wears it for the entire episode, though his antics have him on the verge of losing a few stripes by the final scene.  While Bob's business casual is nowhere to be found, Colonel Goldbrick is quintessential LOVE THAT BOB (and Henning) otherwise.  One deceptively uncorrected misunderstanding snowballs in a manner that will be very familiar to BEVERLY HILLBILLIES aficionados. 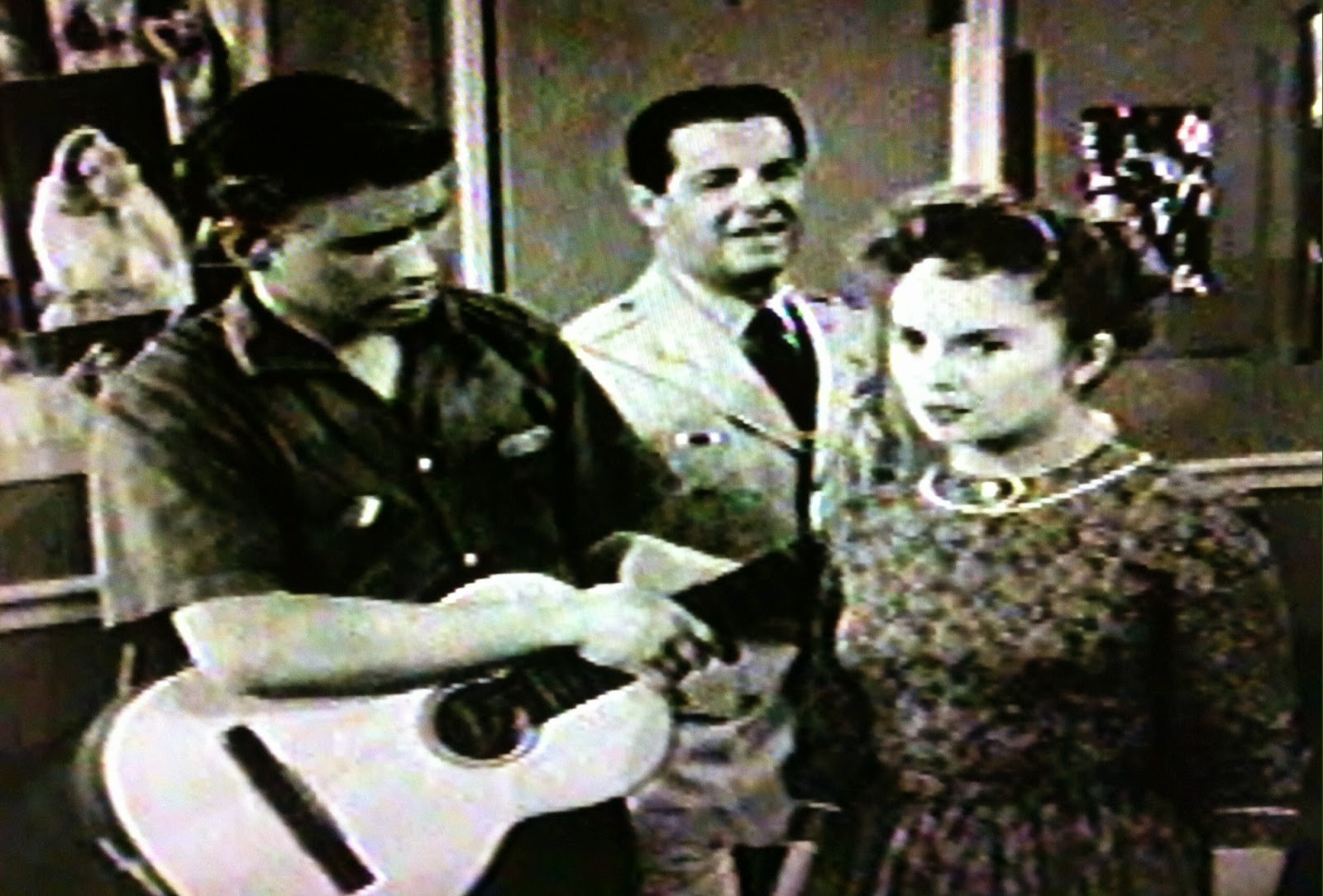 One consistent strength of Cummings' direction was his work with inexperienced actors, as many guest stars during the later seasons were.  He pulls double duty in that regard here, with Stenner and Shoop playing amusing fictionalized versions of themselves.  Seventeen year old Stenner was making the second of two 1957-58 appearances.  A Mary Martin protege who had played Curley in PETER PAN on Broadway as a child, Stenner never parlayed this prime time exposure into rock n' roll stardom.  He did cut singles for the Dynasty label in 1962 and briefly fronted The Grass in the mid-Sixties, but his acting career never took off. 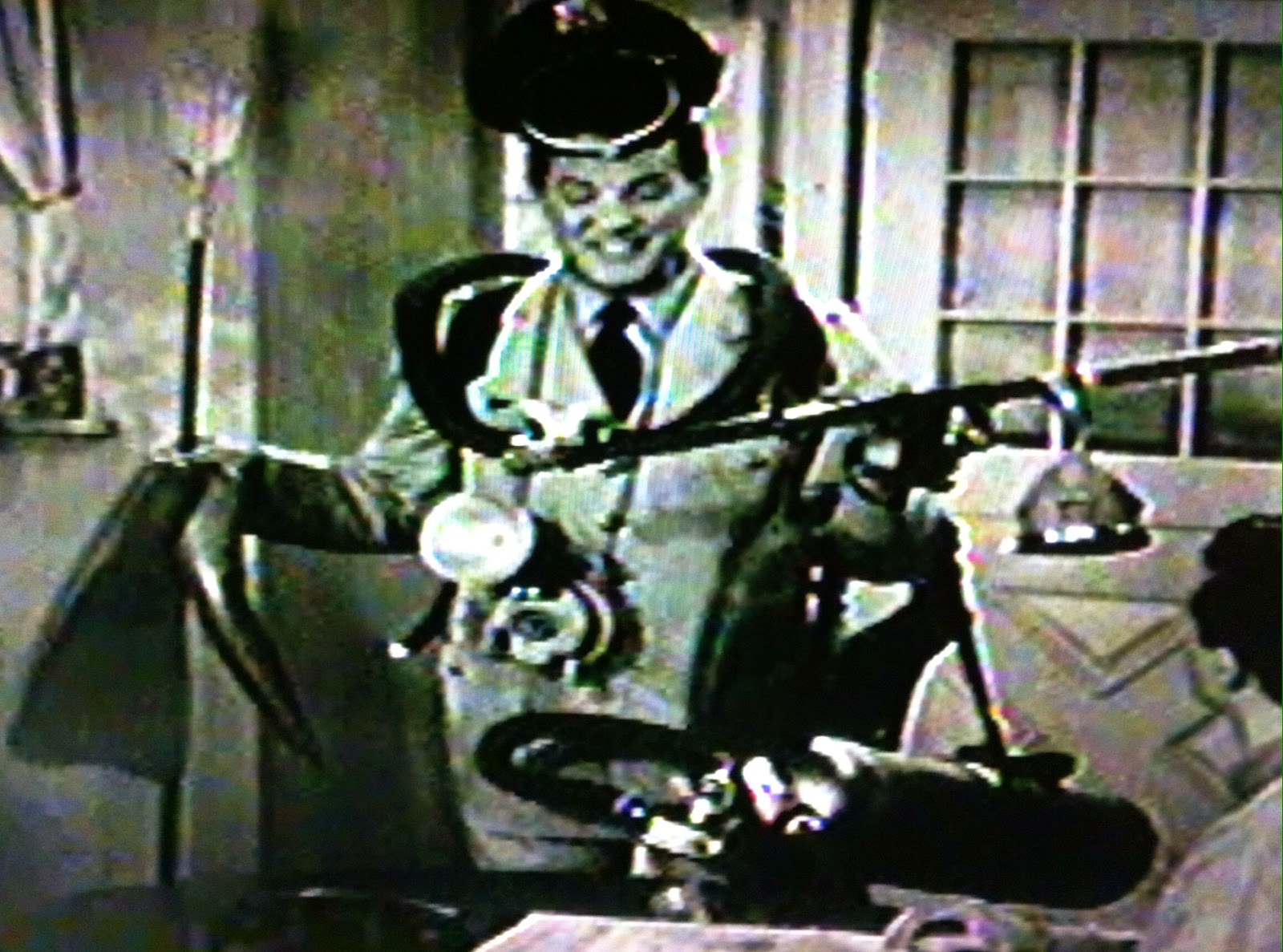 Stenner's second LOVE THAT BOB would be his last, but Major General Clarence A. Shoop (making his fourth appearance here as himself) would return for Bob in Orbit.  Shoop's association with the show's star went back to the General's work as a technical advisor on Cummings' 1943 film PRINCESS O'ROURKE.  While working on O'ROURKE, Shoop met actress Julie Bishop (SANDS OF IWO JIMA), who would remain his wife until his death in 1968 (he was 60; their daughter is actress Pamela Susan Shoop). 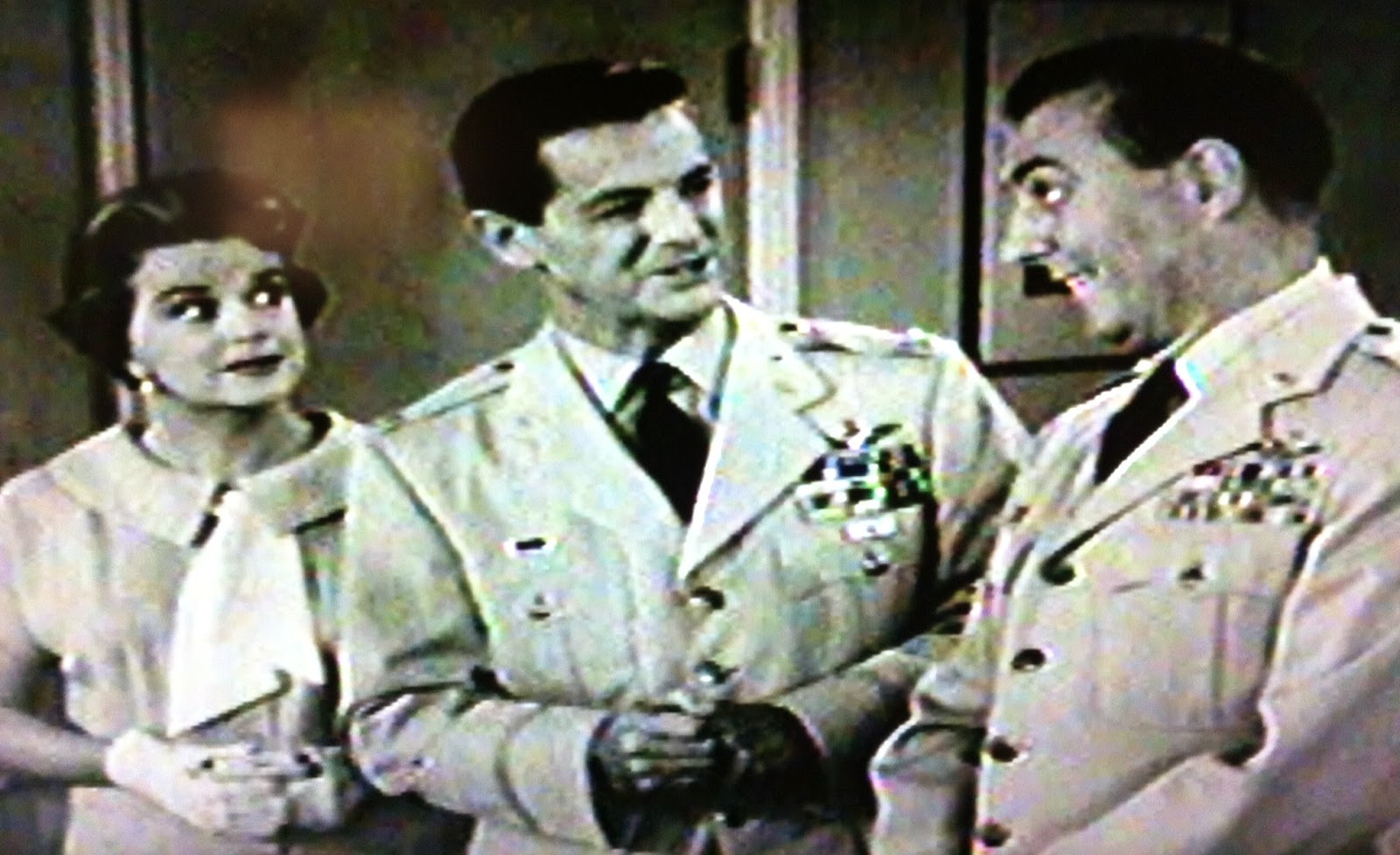 A genuine World War II hero who flew the first photographic mission over Normandy prior to D-Day, Shoop was a technical advisor on several films and also acted in the original INVASION U.S.A. (1952).  He is generously given several good lines in Colonel Goldbrick (including the titular one) and delivers laughs consistently in his largest LOVE THAT BOB role.  In addition to his successes in Hollywood and on the battlefield, General Shoop was also Vice President of (Howard) Hughes Aircraft Company. 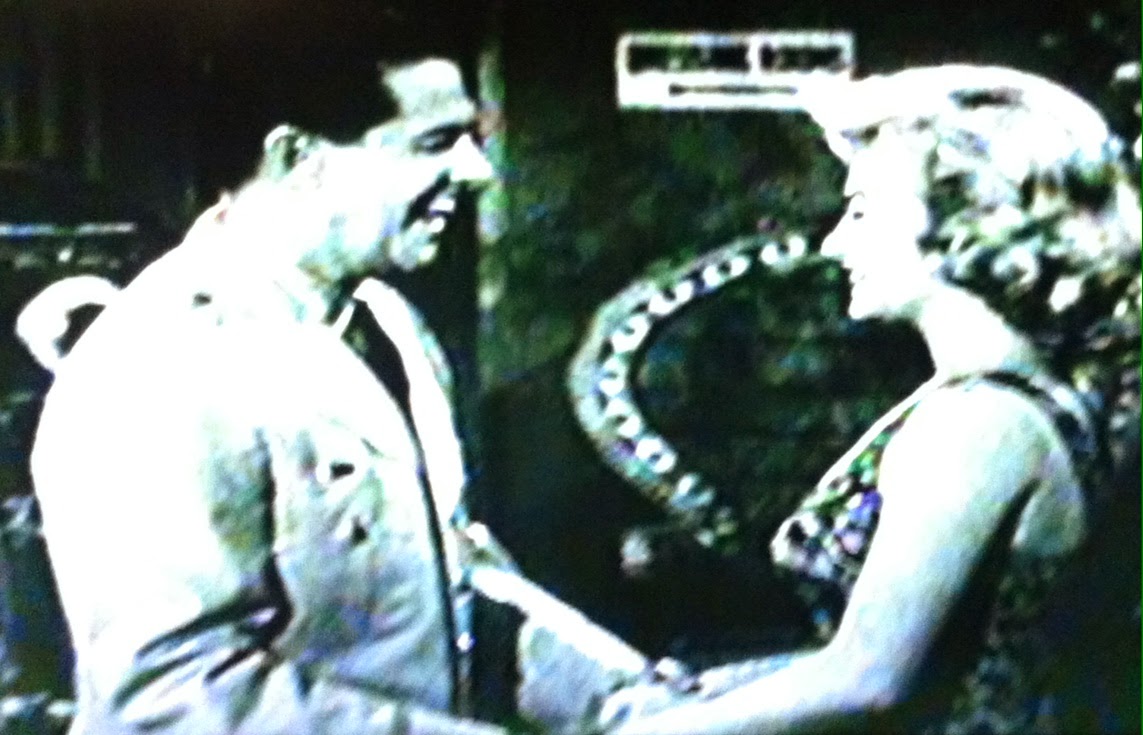 Cummings was nominated for four acting Emmys for the series but his work behind the camera was just as worthy, particularly when one considers how frequently non professional actors were seamlessly blended into the LOVE THAT BOB universe.  The crisply executed Colonel Goldbrick is a solid example to point to. 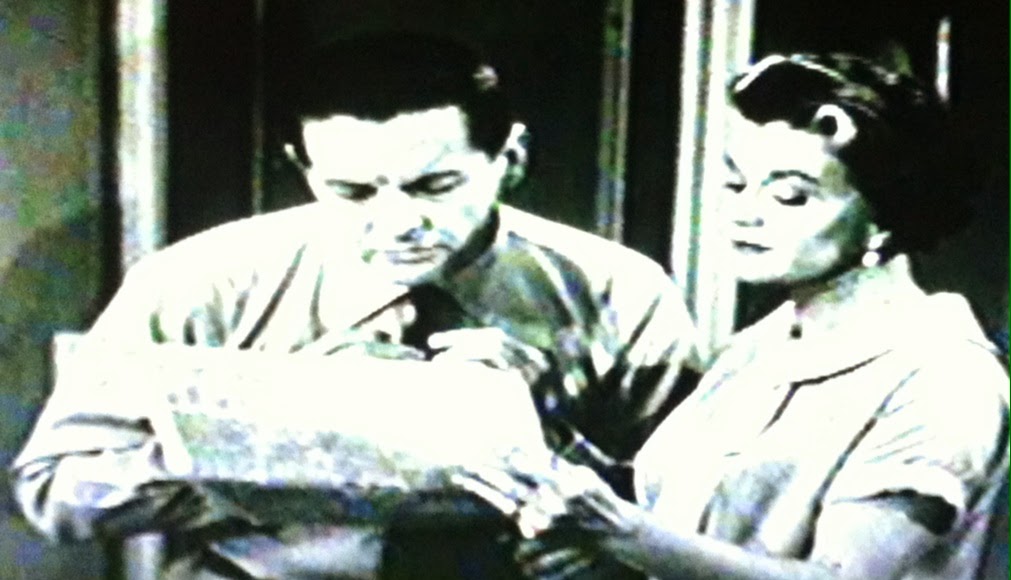 Prodded for words of wisdom, Uncle Bob sees his agonized nephew holding a textbook bottom side up and offers: "You don't hold a girl upside down either."  I dunno, Bob, that might make a man look really virile....   Runner up: the playboy photographer assures Jenny of his love for "water sports".  TMI, Bob!  Oh, no, wait, he clarified that he meant scuba diving.

Everyone....and yet, no one.  See next question.

An emphatic "Hell no" this episode.  Youth is served at every turn; all Colonel Collins gets is a comeuppance.

Another simple farce played to perfection, Colonel Goldbrick is funnier than companion piece Bob Digs Rock n' Roll, which also featured Stenner.  Shoop's deadpan delivery is put to especially good use here as he retorts Cummings' well-timed denials.  Bob's square view on the next generation's music would become a recurring theme in the show's following season, and hints that he was close to the end of his shelf life as a swinging single would become more frequent.  No wonder, then, that the fifth season would be the last.  With two episodes to go in its fourth, though, Colonel Goldbrick displayed a show streaking to the finish line.  (***1/2 out of four)

You are really a good webmaster. The website loading speed is amazing. It seems that you're doing any unique trick. Also, The contents are masterwork. you've done a magnificent job on this topic!Daily Live TV