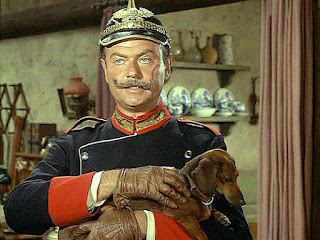 
Captain Parmenter receives an urgent communique from Washington, notifying the C.O. that Prussian Colonel Heindrich von Zeppel will be arriving to train the men of F Troop for a new Balloon Corps.  Agarn isn't thrilled with the idea of becoming a flying soldier, but O'Rourke sees fringe benefits on the horizon: speedier deliveries for O'Rourke Enterprises, an expanded customer base, and the ability to sell rides to civilians. 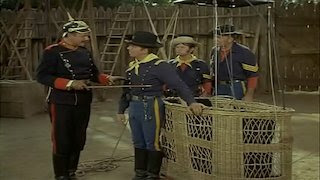 Von Zeppel arrives on (literally) the noon stage and the Sarge soon changes his tune.  First the Colonel institutes grueling physical training for his decidedly deconditioned new subordinates.  Next, Heindrich poaches the Vice President of O'Rourke Enterprises to be his begleiter.  Agarn is soon brainwashed into doing things the blue blooded Prussian Vay: wearing a monocle, answering "Jawohl" to orders, goose stepping, and replacing his cavalry hat with a pickelhaube.  That's bad--but it gets worse.  Von Zeppel plans to use his Balloon Corps to go beyond mere reconnaissance, beginning with a full scale aerial assault on the Hekawis. 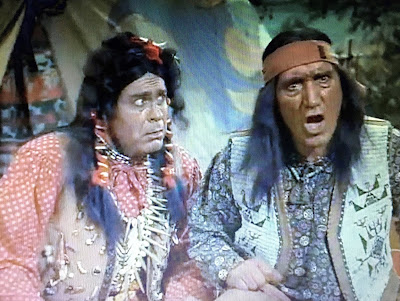 "And if it vorks--it is Vestvard Ho!  Un to the Apaches!"

With the historically accurate Civil War use of observation balloons by the Union's "Chief Aeronaut" Thaddeus Lowe as their springboard, the husband and wife team of Austin and Irma Kalish makes a splashy series debut.  The first of their eight teleplays for Season Two, Bye, Bye, Balloon boasts quite a comedy smorgasbord: cheeky ribbing of ABC lead-in BATMAN, sharp parody of HOGAN'S HEROES' equally edgy source of humor, and arguably the two most quotable lines of the season.  For starters, that is.

Believe it or not, that running gag didn't debut until this third episode of F TROOP's second season.  Despite the late start, this quote quickly became as synonymous with the show as a falling lookout tower.  O'Rourke sets that punch line up for the very first time in Bye, Bye, Balloon's teaser, with only about 15 seconds passing before Agarn angrily asks the aforementioned question.  The pauses would get longer and funnier as the color episodes continued.  Rather impressive to come up with a running gag of such longevity and quality in your inaugural script for a well-established series.  Nice job, Mr. and Mrs. Kalish! 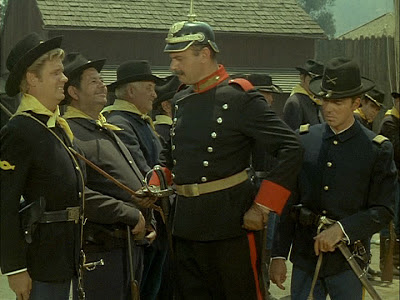 Refusing to be outdone, director Seymour Robbie (Johnny Eagle Eye) starts the proceedings with an impressively choreographed letter reading by gracefully clumsy Parmenter that betters the hitching rail antics in Old Ironpants.  Surprisingly, the narrow avoidance of disaster in this opening minute is the closest we get to a pratfall in Bye, Bye Balloon despite the foreshadowed and seemingly inevitable presentation of a duel between our distinguished officers. 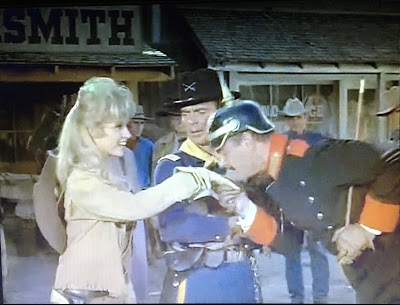 The late, great Harvey Korman was "only" 6'3", but seems about 3 inches taller in his boots and helmet here--a truly imposing antagonist who even appears to tower over Tucker in a couple of shots.  It's a wonder mother Prussia would spare this most patriotic officer at a time when war with Napoleon III loomed, for von Zeppel's heart bleeds Prussian blue.  Hell, his faithful Dachshund (of course) is even named Schnitzel.  When the Colonel isn't singing the praises of sauerbraten and ten mile pre-breakfast hikes, he's indoctrinating the always easily-led Agarn.  Storch's entertaining way with a accent keeps Korman from dominating their scenes together, but the future Mel Brooks mainstay nevertheless stands tall (figuratively, too) as one of F TROOP's most indelible guest stars. 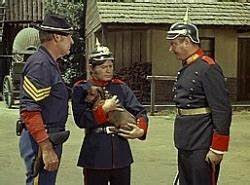 O'ROURKE: "Of course he accepts!  The honorable name of Parmenter is at stake!"
AGARN: (sotto) "He could always change his name."

One sticking point in Bye, Bye, Balloon is the nagging feeling that O'Rourke and Agarn don't seem as protective of the Captain and their business interests as they should be.  Attempts are made to steer Wilton out of harm in the climactic clash with his lofty adversary, but compare the exchange above this paragraph with the duo's desperation to avoid conflict in Dirge for the Scourge.  The attempt to help their 50/50 partners is blunter but still toned down from the outright sabotage depicted in The New I.G. and The Phantom Major.  To be fair, that delicacy is necessary since von Zeppel is a considerably more fearsome foe than the conceited Major Bentley Royce.  Suffice to say that with the benefit of a fresh look, the defense of the Enterprises is definitely sturdier than the astonishingly feeble effort (if one can call it that) in the previous week's How to be F Troop Without Really Trying. 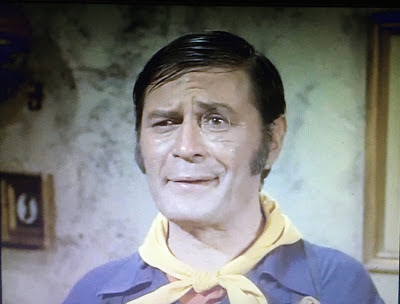 Let's face it, there is one rather obvious hindrance to attacking a force proficient in archery via balloon.  And not just the Apache--even the Hekawis manage to hit the basket with one arrow.  Hey, it is improvement from the target practice in The Day the Indians Won.  Perhaps Agarn really did make some progress with that training.  Speaking of, it's too bad we don't get to see Duffy, Duddleson and Vanderbilt becoming flyboys--in fact, Vandy is missing altogether from this one.  Wild Eagle's response to the sight of the titular bag gets all the love, but I'm partial to his hilariously deadpan story about the Hekawi who tried to fly.  Whatever floats your boat, Bye, Bye, Balloon has something to make even F TROOP's detractors laugh out loud.  And by the way, if you are one, you're wrong! 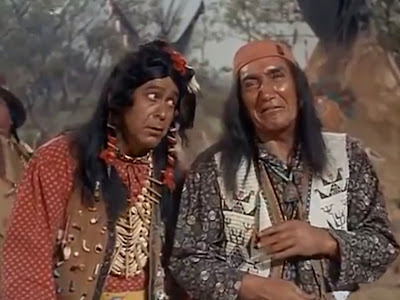 Newspapers at the time reported a mishap while filming Agarn's flight with Schnitzel in which the balloon suddenly surged upward, with Storch's legs tearing the bottom and the show's gravy comedian clinging to the side of the basket some 35 feet in the air before the bag was hauled back down.  Fortunately, a nip on the lip from the frightened canine was the comedian's only injury.

THE ALL IMPORTANT NIELSENS:

Bye, Bye, Balloon aired during the first report of the 1966-67 season, helping win the time period with a 17.8 rating versus DANIEL BOONE's 16.8 and JERICHO's 16.5 for the two weeks ending September 25, 1966.  F TROOP ranked 44th, so all three shows were off to a lukewarm start.  In subsequent weeks, the established shows heated up and JERICHO kept cooling.

In addition to the expected military history--which is correct for once! (the Kalishes would prove to be sticklers for this) we learn some German by way of Prussia.  For example, "feldwebel" means Sergeant.


NUMBER OF TIMES O'ROURKE COULD HAVE BEEN CHARGED WITH TREASON:


Once.  Ok, so he doesn't actually throw a battle this time, but revealing Army plans to the enemy about to be attacked would still get him the charge. 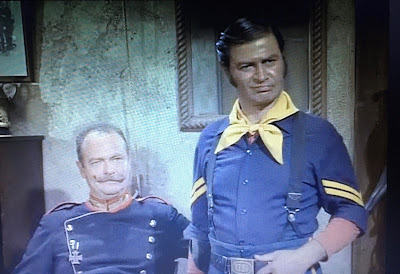 
"He who plant crop of rhubarb will lose moccasins in light of full moon."  The Chief is as indecipherable as ever, though Crazy Cat goes along with it. 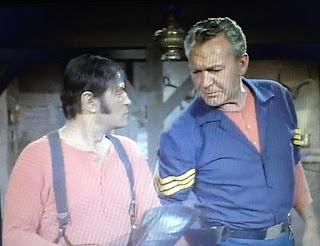 
Probably not, if you're Prussian.  Your heritage is represented by a goose stepping officer arriving to wipe out Native Americans--but only if they're incapable of fighting back (as he states in the tag).  But fear not: like all the bloodthirsty Fort Courage visitors who preceded him, von Zeppel is thwarted in his efforts to break the peaceful, profitable coexistence between troop and tribe.  And if you're offended by Wild Eagle's famous and beloved quote, well, there's just no hope for ya. 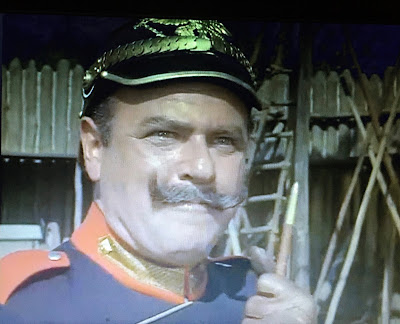 
I underrated this one in my initial assessment in reviewing the second season DVD.  Controlled chaos full of quotable lines and engagingly performed by the entire cast.  Bye, Bye, Balloon is also ranked too low by the Imdb.com readers (41st out of 65 episodes?  Really?).  A top five color installment, with more than enough inventiveness to compensate for any of my nagging questions.  Excellent work from Kalish, Kalish and Robbie; they would later collaborate on (IMO) the finest color episode, Our Brave in F Troop. (***1/2 out of four) 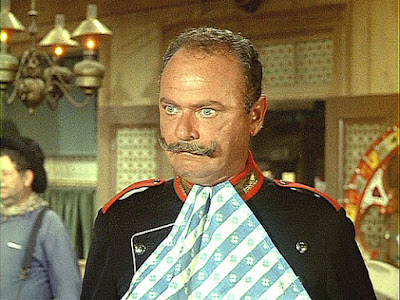