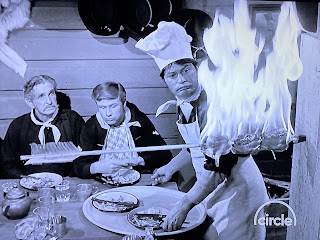 "I hereby requisition your cook--and that's an order!'

Major Duncan brings his usual saddlebag of trouble to Fort Courage, taking Cookie with him after a dinner in the mess hall.  Fortunately O'Rourke has a solution for Parmenter, presenting a formerly modest Agarn as the perfect replacement.  Of course, it's the latest moneymaker for O'Rourke Enterprises--they can order more food than they need, using some leftovers in the saloon and selling the rest to the Hekawi. 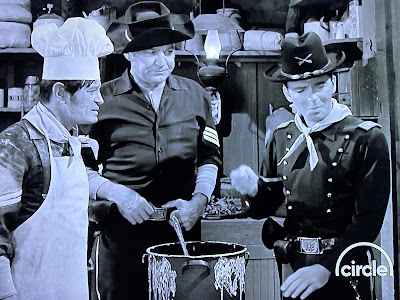 "Sarge, it takes me twenty minutes to boil a three minute egg!"

Despite Agarn's lack of culinary talents, O'Rourke reasons that a simple cookbook will solve that problem well enough.  Naturally it ends up destroyed, forcing Agarn to improvise.  And subsequently, O'Rourke to do the same in order to calm the restless troopers.  Crazy Cat proves to be a much better cook than his army counterpart.  Problem solved?  New one emerges---the Major is back, ready to pull rank again after losing Cookie to a Colonel.

"This is a balanced meal."

"Yes it is, these biscuits weigh as much as the main course!"

Too Many Cooks Spoil the Troop is one of the boldest expansions yet for O'Rourke Enterprises.  There will no doubt be an increase in the requested supply budget caused by the Sergeant's latest idea, but as always, our non-coms will handle one crisis at a time.  Gaslighting the Captain is never a problem, first on Agarn's heretofore concealed reputation as a great cook, then on the quality of the chow he's tasting.  But Agarn is the only man available for the Sarge who can be trusted, and so this scheme will rely heavily on a cookbook. 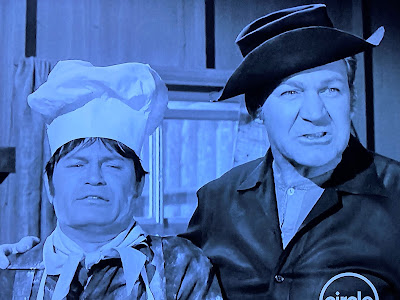 "You're going to enjoy that food if it kills you."

Once the Corporal's shortcomings in the kitchen become impossible to ignore, O'Rourke has to cut the Hekawis into the subterfuge.  Try as O'Rourke might to conceal his diversions, his 50/50 partners always end up getting their cut somehow.  Conversely the Hekawis--unencumbered by Uncle Sam's watchful eye--are consistently better at profiting long term from their side hustles: The Playbrave Club, the steam room, even joining O.E. at dipping into government funds. 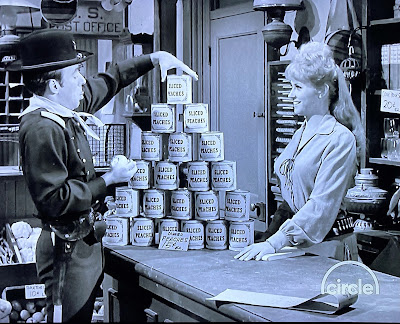 Another (unknowing) beneficiary is Wrangler Jane, whose general store is the middleman for the orders charged to the Army.  O'Rourke has been getting yeast and barley for some time with the mess hall as cover, but said orders increase dramatically with Wild Eagle's taste for beef and squab and the saloon apparently needing geese (30, and the Chief didn't order them).  It would appear that Jane, the Hekawis, and O'Rourke all make a profit and the government loses money on the deals.  While the Civil War was the biggest cause of the explosion in U.S. debt during the 1860's ($65 million at the start of the decade, $2.76 billion by 1866), Fort Courage certainly wasn't helping matters. 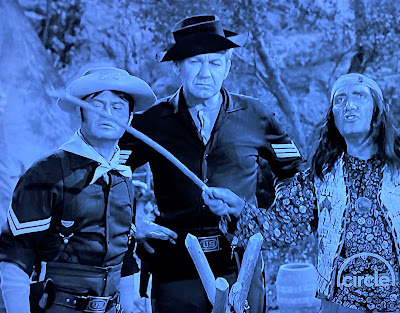 Too Many Cooks might Spoil the Troop but good cuisine is apparently very hard to find, unless the White House cook spoils the demand by writing his memoirs.  This little goof (along with O'Rourke's deft maneuver back to the status quo once the credited Agarn is tapped by Major Duncan) results in Cookie getting his old job back--and apparently learning a few tricks of Crazy Cat's trade via Agarn.

Too Many Cooks Spoil the Troop is the only first season assignment for the writing team of Stan Burns and Mike Marmer, and the freelancers show a great grasp of the characters and established tone.  They would return for The Great Troop Robbery and enjoyed a long run in the final decade of the variety show's heyday during the 1970's, most notably on Dean Martin's show and celebrity roasts. 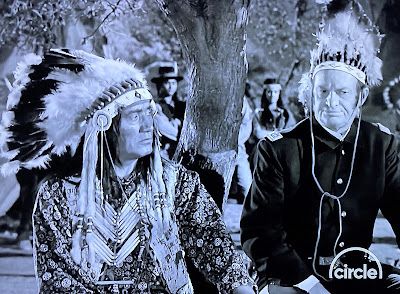 The latest in a score of visiting officers, James Gregory would prove to be a great enough foil to return as Major Duncan for Lieutenant O'Rourke, Front and Center.  Stern, authoritative, and just a tad obnoxious in pulling rank, Duncan doesn't have a good experience at the Hekawi camp with Agarn showing him to downside of "Indian style" food.  The Major apparently doesn't hold a grudge, since he's a very enthusiastic Playbrave Club customer on his return trip.  It's too bad that this Major didn't make his way back for the color installments, but Gregory himself did, threatening O'Rourke Enterprises in a new civilian role (Carpetbagging, Anyone?).

Also a returning guest star is Jamie Farr, who wasn't even credited in Our Hero, What's His Name? but gets that wrong righted this time as the unsuccessfully auditioning Standup Bull.  How funny was he?  Read on:

Henny Youngman apparently stole his most famous line from Standup Bull, a little known tribal circuit comic from the 19th century.  Alas, Bull's humor is just too ahead of its time--"don't smoke signal us, we'll smoke you" is the stone-faced response from the Chief.

Crazy Cat cooks with wine.  I suppose dishes with bourbon or sherry are out of the question since the Sarge wouldn't want to dilute saloon supply to feed the army. 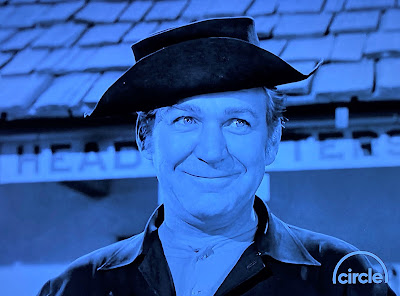 This scam was far from a disaster, but didn't last long and obviously didn't generate the anticipated profits with $11 weekly going to Wild Eagle within a week and the gig ending shortly thereafter.  The Sarge should have known this plan was precarious.  But while his non saloon-and-souvenir schemes usually fail, he has a commendably high batting average at damage control that rivals Bilko's. 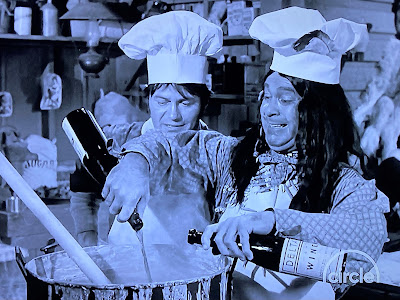 Hiring Native help in the mess hall qualifies if it is learned that he's plying the troopers with alcohol through his dish.  Might be stretching the definition, but this places Crazy Cat inside the Fort and gives him access to the plans of the "enemy". 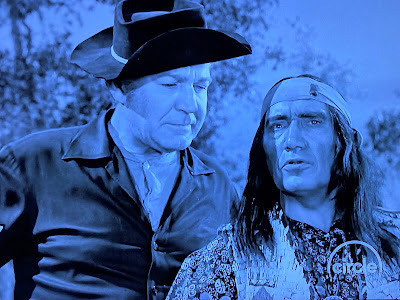 No official sayings this time, but that bear skin rug in Parmenter's quarters?  A gift from Wild Eagle, who feels that "a bear skin in the tepee brings good luck".

On balance, the former.  Major Duncan feels the Indian cooking is unsanitary.  To be fair to him, his opinion forms from the exaggerated version provided by the partners to keep Agarn in the fold and safely away from Apache territory.  As noted above, Jane and Wild Eagle likely make out better business-wise from O'Rourke's latest side hustle than the man himself.  The ever empathetic Parmenter even defers to the Hekawi manual once.  Finally, while it may not quite make up for the oft-cited, one sided real estate deal in Manhattan twelve score ago, but Wild Eagle requests and receives a ten percent increase from O'Rourke's initial offer negotiating for Crazy Cat's culinary services--for Minuit's aforementioned "bad treaty". 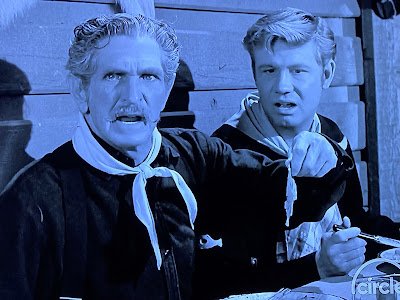 Consistently funny, Too Many Cooks Spoil the Troop shows the upside of fresh minds getting a crack at a show's well established tropes.   Burns and Marmer keep 'em coming fast enough that the groaners aren't intrusive, and the gags that hit give Storch, Diamond and Tucker a field day.  Generous portion of laughs for our Privates as they react to a week's worth of starvation (Dudleson's deadpan line might be the best, in context).  A rewatchable winner.  (***1/2 out of four)

I look at the first pic of Agarn & O'Rourke, and I'm reminded of the famous "Chef of The Future" episode of "The Honeymooners".

Marmer & Burns would later give us "Lancelot Link, Secret Chimp", 3 years after "F-Troop" ended, and after that failed, "Curiosity Shop", though I think the team had split up before doing the Martin roasts.