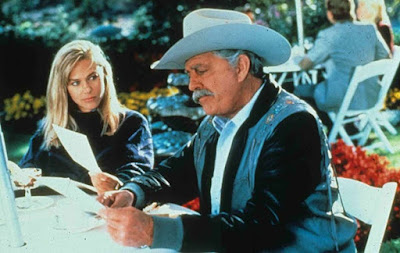 Jerome Jeremiah Starbuck is a gregarious San Antonio billionaire, chairman and founder of Marklee Enterprises (named for his son Mark and wife Lee).  With a heavy drawl, ten gallon hat and the impeccable manners of a country gentleman, he takes his 1961 Lincoln convertible (subtly fitted with a bull's horns on the hood) around the country solving baffling mysteries and helping those in need. 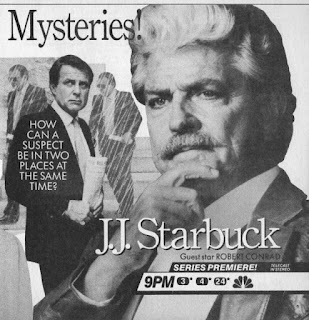 Is he doing this for the Hell of it, a la millionaire police captain Amos Burke (BURKE'S LAW)?  No, he's trying to be a better person (a la THE EQUALIZER's Robert McCall and later MY NAME IS EARL's titular Hickey).  A tragedy made Starbuck realize he'd prioritized work at the expense of his family: Mark and Lee were flying to surprise him at work when a crash killed them both.  With money's real importance in the big picture now sadly apparent to him, J.J. turned the day-to-day operations over to right hand man Bullets and decided to use his influence, money and pure old fashioned horse sense to help others avoid his mistakes.  And sometimes, to help bring justice to those who were using their riches to avoid it. 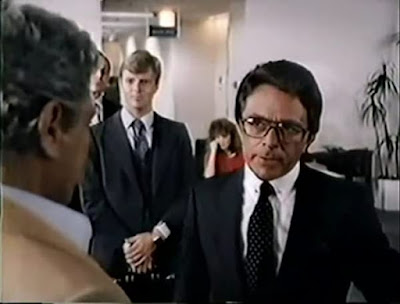 Mostly inspired by a catastrophic fatality from Cannell's own personal life (his 15 year old son Derek was killed in a beach accident) and partly by NBC President Brandon Tartikoff's vision of a "Charlie Bullets" who drove around with steer horns on his auto, J.J. STARBUCK didn't get a warm greeting from the day's critics, who found Starbuck to be a bit cartoonish (Robertson also disliked the outlandish hood ornament; Cannell felt it part of the package luring the guilty into a false sense of security) and the homilies (about six in the pilot, but cut down to a more reasonable two or three per episode after) too corny.  At least they didn't find much wrong with "Gone Again", the theme song by Ronnie Milsap:

Cannell's colorful touch is in evidence throughout, and while it's hard to argue STARBUCK was a lost classic, it deserves a look.  For one thing, J.J. is pretty much a loner despite the presence of Dean and Weatherly in the credits.  Weatherly is really recurring, and Dean literally phones his role in, spending a couple of minutes per show on the phone with J.J. going over Marklee bidness and helping his boss connect with contacts needed to carry out the week's mission.  (Huddleson is a bit more ambulatory in the pilot, FWIW.) There's no Mark Shera or Joe Penny around to provide a youthful counterpart to our senior sleuth--64 year old Dale Robertson refreshingly goes it alone.  (At the outset, that is--more in a bit.)  With an older lead, focus is more on mind games (billionaires have a long, long list of contacts in a lot of different fields) and people skills than action.  Robert McCall was far more ready to shoot or fight, but he was a decade younger.

There's also the sturdy presence of TALES OF WELLS FARGO star Dale Robertson, handpicked by Cannell to star.  He'd largely been missing from Hollywood since completing his DEATH VALLEY DAYS stint in 1970 and purchasing a large ranch in his native Oklahoma near Yukon.  Robertson never formally retired, taking brief runs on DYNASTY and DALLAS for a few episodes each, but mostly tended to his ranch until Cannell came calling.  He's excellent in the lead, really selling J.J.'s wisdom and courtesy (even "Hell" or "Damn" will get an admonishment not to cuss!).  And no, I'm not just praising him because he was from my home state. 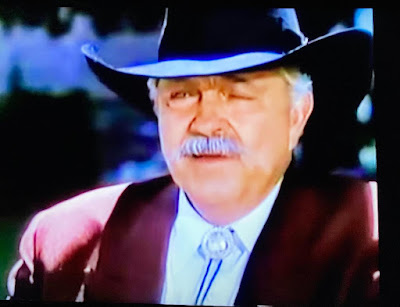 That said, it might have been a mistake to open the series with four consecutive murders to be solved.  Each affluent culprit played by a special guest star committed the crime in Act One, showing us the meticulous steps taken to cover up the killing.  Each seemed impossible to convict, and each underestimated the ol' country bumpkin poking around in his affairs--who grated on the suspect and ingratiated himself with everyone else.  Yes, seen in succession, the first four episodes give critics calling it a COLUMBO clone (or, COLUMBO played by McCLOUD) plenty of ammo.  There would be a wider range of stories after that, including one A-TEAM styled adventure involving terrorists attacking Marklee(!), but with MLB pre-emptions, it was over a month before we saw any variance in the show's approach.  Detractors initially calling it derivative and repetitive certainly appeared to have a point until then. 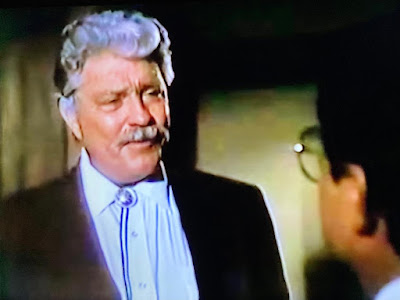 J.J. STARBUCK was kind of star crossed from the get-go.  Following MATLOCK on Tuesday nights meant the show was scheduled against MOONLIGHTING, which was at its ratings zenith and gathering as much press as any show could in 1987.  Then, Dale Robertson broke his hip in an accident on his ranch during a break in filming that October, making it necessary to bring in assistance for the convalescing star to keep filming on schedule.  While Cannell had an inspired idea for that, bringing in Ben Vereen to reprise Tenspeed from his much loved but short lived 1980 flop TENSPEED AND BROWN SHOE, this unfortunately cost Starbuck his loner mystique and took away a quality that made the show stand out.  Finally, NBC couldn't really seem to decide whether J.J. STARBUCK should air on Tuesdays or Saturdays, so it was hard to know when it would be airing.  It all added up to a short 16 episode run, and Robertson went back to his ranch for good.  He passed away in 2013 at age 89. 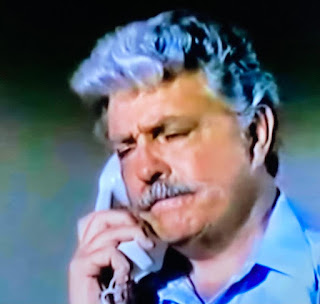 Thanks to the wonderful YouTube channel Murder, She Watched, episodes of J.J. STARBUCK have been uploaded to enjoy for the first time in, well, 34 years to my knowledge.  I'm also thankful the channel has some CRAZY LIKE A FOX segments, which means I'll be resuming that episode guide shortly. I've been right plum busier than a termite in a sawmill, but I reckon I can rustle up a little time to review some of them thar J.J. STARBUCK episodes at this here blog.  Be a lookin' fer 'em in the near future, and remember, ten percent is what ya make it and ninety percent is how ya take it!

Who could, John? Thanks for visiting! I might have to revisit Mr. Van Cleef's 1984 series sometime. He's the star of one of my film favorites, BARQUERO.

Hal, good and enjoyable write-up of J.J. STARBUCK. I barely remember this one, but I do remember the 1961 Lincoln convertible with horns on the hood that he drove, Tom Mix style. Dale Robertson is top-notch in my book, especially in the TALES OF WELLS FARGO(1957-62) and IRON HORSE(1966-68). Dale had such a grand screen presence, voice and he was the real deal.

Thanks for reading Walter! Up to my neck in real work these days but have watched the first 7 episodes so far. Quite a mixed bag, but carried by Mr. Robertson even when it's corny. Eventually I'll get every episode I can find reviewed.