Five years ago today, we lost Roy L. Fuchs himself, the great Jack Warden.  I won't go into detail about why this man was one of the very best actors who ever lived since I've already done that.  Instead, I'd like to ponder why his best-remembered TV series, underappreciated in its day by its network despite healthy ratings, hasn't made it to DVD yet. 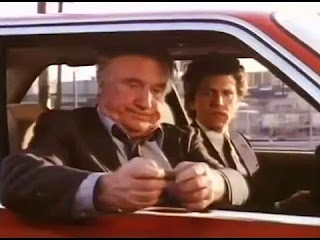 Warden had some success in prime time in earlier years, enjoying a second season with the decent cop show N.Y.P.D. (1967-69) and even the CBS version of THE BAD NEWS BEARS (1979-80), despite the fact that the movies had already run their course and you could forget about the kids spouting four-letter words during the three network era.  But when CRAZY LIKE A FOX premiered in 1984, it appeared that Warden had finally found the vehicle to take him to TV superstardom. 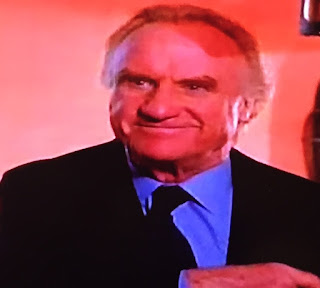 Warden played Harrison Fox Sr., a freewheeling San Francisco P. I. who was nicknamed "Harry" to avoid confusion with his son Rubenstein, a straight-laced attorney.  Senior was forever inadvertently dragging Junior into his latest case ("All I need is a ride!  What can possibly happen?") and, naturally, whatever it was that could possibly happen, and go wrong---did.

Each week's adventure took some unexpected turns, but the well-traveled, disheveled, but wily old pro found the solution in the end.  No long lost classic, just a funny, breezy show with Warden and Rubenstein showing solid chemistry from the pilot episode.  If you can imagine Peter Falk and Alan Arkin in THE IN-LAWS as father and son with Falk as the father, that's a reasonable estimate of what CRAZY LIKE A FOX was like. 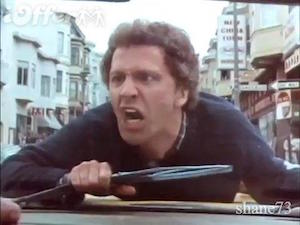 The role of Harry Fox fit Warden like a glove.  It was designed to.  The series' creators (John Baskin, Frank Cardea, George Schenck and Roger Shulman) had Jack Warden in mind for the lead from the get-go, and researched and drew upon the actor's real-life experiences while fleshing out the Senior Fox, and the character ended up sharing Warden's WW2 experiences as a paratrooper and other real-life occupations of his youth (i.e. bouncer, lifeguard). 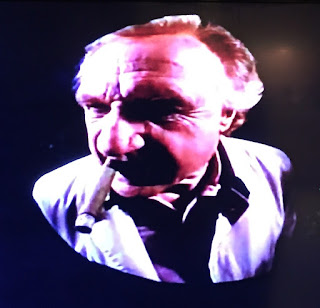 Warden was also the perfect actor for what Baskin and company had in mind: a comedy-adventure hybrid to fill in the gap left by the pending death of the sitcom genre.  At least, that's what everyone thought in 1983, when this concept was in development:  CHEERS and FAMILY TIES were already on the air, but not exactly setting the Nielsens on fire.  THE COSBY SHOW would change that the following Fall, while the FOX was still waiting for his time slot.

CRAZY LIKE A FOX was a midseason replacement in 1984-85 for CBS in the Sunday night slot between MURDER, SHE WROTE, which was in its first season, and TRAPPER JOHN, M.D., which in its sixth was starting to show signs of wear.   FOX was an immediate smash, ranking 10th in the Nielsens at season's end.  It was CBS' second highest ranked new show behind MURDER (8th) and the third highest rated new series of the entire season. (COSBY was 3rd.)  So at age 64, Jack Warden finally had a long awaited and well deserved hit of his own--and an Emmy nomination for Best Actor in a Comedy Series.

THE COSBY SHOW lasted eight seasons; MURDER, SHE WROTE lasted twelve.  So how on earth did CRAZY LIKE A FOX end up canceled just one year later, despite a second Emmy nod for its star?  Well, CBS did what networks too often do.  They tinkered it to death.  In this case, they didn't tinker with the show creatively: the lighthearted cases of Season Two were every bit as entertaining as those from the first.  No, this time scheduling by ADD was the culprit.  CBS preempted the show six times by mid-December!  Not helping the cunning Foxes was running mate TRAPPER JOHN, M.D., which went into a ratings free fall in its seventh year, weakened by age and cast defections. 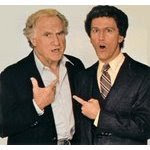 The result was a drop from # 10 to a still respectable # 29, cause for concern, sure.  A new lead-out at 10 ET sounded like the logical choice (FOX had been in the top 10 three months earlier), but instead CBS started playing musical time slots.  Unfortunately the first move was opposite ABC's entrenched DYNASTY.  When that didn't work, the network tried FOX at 8 PM Thursday---yup, opposite COSBY.  The 1985-86 season marked the end of a six year reign atop the Nielsens for CBS, and with moves like this to kill off a promising show, one can see why.  I can only imagine the choice words Roy L. Fuchs would have had for the programmers.

Predictably, CBS received protest letters from viewers, and the palpable fan interest led them to green-light a reunion movie during the 1986-87 season, STILL CRAZY LIKE A FOX, which delightfully played like a two part episode of the regular series.  Set in England and co-starring Monty Python's Graham Chapman, STILL CRAZY was a ratings hit in the series' old Sunday time slot, ranking # 12 for the week ending April 5, 1987.  There was talk that CBS would correct its earlier error and bring CRAZY LIKE A FOX back for the 1987-88 season.  Alas, it was not to be.  CBS scheduled more hour-long dramas than any other network but decided the likes of THE OLDEST ROOKIE and HOUSTON KNIGHTS were better bets than a proven viewer favorite headlined a two-time Emmy nominee. 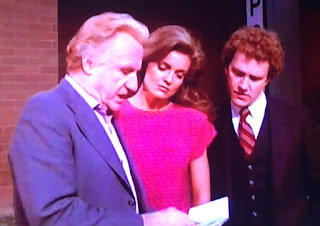 CRAZY LIKE A FOX has virtually disappeared.  It's hard to syndicate a show with only 35 episodes.  Still, this one is an ideal candidate for rediscovery on DVD, a fun, fondly remembered showcase for perhaps the quintessential character actor, Jack Warden.
Posted by Hal at 7:55 AM

I wonder - did Warner Brothers produce the series? I ask because the Warner Archive has done a pretty cool job in releasing some vintage series (as well as some Hanna-Barbera stuff - the link's included to provide insight; I'm not a spammer - honest!).

Hi Gordon, and thanks for reading! Columbia produced it, and Sony now has the rights to CRAZY LIKE A FOX as far as I know.

Only just discovered this article after hunting incessantly for episodes of this amazing show. What do we think the chances are of a DVD release by some smaller niche distributor? Alternatively, how difficult is it to lease the rights and self-release?

Another one desperately searching for the episodes (Made up part of my childhood) - I know you can get the films (Graham Chapman in a surreal serious role), but like "The Goodies" in the UK; a once-popular show can't be found anywhere.

Strangely, YouTube has "Die Fälle des Harry Fox" - https://www.youtube.com/watch?v=GndqYWYxxM0 - which seems to contain all of the original episodes. Unfortunately dubbed into German.

I really wish it would come out on dvd. Lately, shows with fewer episodes than this one have come out on dvd as a "complete series." Why not this one?

The almost complete series is available from ioffer.com on dvd

Crazy Like A Fox remains one of my all-time favorite shows! I would LOVE to have the complete series as well as Still Crazy Like A Fox! PLEASE DO THIS!!!

Sony have been running Crazy Like a Fox in the UK at the end of 2020 on the 'Sony Channel' at 4pm GMT on weekdays.
However the schedule looks like it is going to finish with Season 2 episode 11 (skipping the last 11 episodes) and jumping back to the pilot episode at that point.
The picture qualilty also looks a bit poor. This may just be by comparison with modern TV standards, - but there are many series from the 1970s with better picture quality. That said, - it has still been a delight to watch, and I feel very sorry for any fans out there who have not been able to see this welcome rerun.
This is only the second time I have ever watched it (it had made a strong impression 35 years ago) and I have been surprised how strong the acting (and comic timing) has been for all four lead actors. Jack Warden is just as strong as I remember him, but some of the best parts still come when he does a double (comical) act with John Rubinstein. Penny Peyser provides a surprisingly strong performance for such a support role, and even Robby Kiger returns some decent acting.
Look out for Tracy Scoggins and George Clooney in guest roles.