Film Review: THE CRAWLING EYE a.k.a. THE TROLLENBERG TERROR (1958) 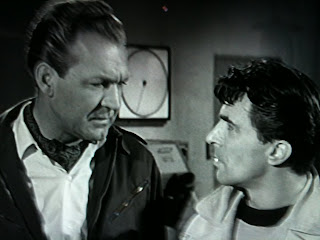 Welcome to The Horn Section's contribution to the 50's Monster Mash Blog-a-Thon at Forgotten Classics of Yesteryear!  This is my very first blogathon in the five years I've been reviewing the overlooked and obscure, and what better debut than a tribute to a bona fide genre standard starring The Horn Section's number one icon?

Be sure to check out the other entries from the online film blogger community during this six-day salute to the classic monsters of the 1950's.  There's 43 participants altogether, and this has been going on since Thursday morning!  While you're there, note that this isn't the first time Nate's hosted a Blog-a-Thon; the Roger Corman showcase from June is also there for your perusal.

So is my site, while you're here. (hint) If you happen to be browsing The Horn Section for the first time, welcome!   Feel free to sign up for notification via email (lower right column) or follow me on Twitter for future reviews and musings.  (hint hint)

And now, with the commercials out of the way, our feature presentation.......

The Alpine village of Trollenberg has been plagued by a series of fatal accidents on the town's namesake mountain. Numerous climbers have mysteriously vanished without a trace, and the only one who was found had been beheaded.  A static, radioactive cloud near the peak is the common denominator in the deaths and Mitchell, believing alien forces are involved, has summoned colleague Tucker to help.  Psychic sisters Jayne and Munro decide to tag along after the latter experiences a premonition on the train just before Tuck's scheduled stop there.

Called on because he and Mitchell witnessed similar lethal happenings in the Andes years earlier, Tuck is reluctant, for the prior fiasco almost ruined his career.  But a geologist ends up as a second decapitation victim, an experienced climber turns into a dead-eyed zombie with his murderous sights on Munro, and reporter Payne observes all of it.  The otherworldly creatures seem to be better acclimated to the conditions by the minute. With the entire village under assault and secrecy no longer an issue, Tucker takes charge and confronts his painful professional past.


Unsubtly retitled THE CRAWLING EYE for its U.S. release, THE TROLLENBERG TERROR remains one of the most beloved sci-fi flicks of its decade.  The nostalgia factor goes beyond one's fondness for otherworldly monsters and vintage black and white film.  Pay close attention to the alcohol consumption by the characters:  I'd say on a "drinks per minute" basis it's more than your typical DALLAS episode but less than an average BEWITCHED.  TERROR is more than suitable for inventing drinking games of your own (I recommend the word "cloud" as the trigger to "down it").   Quentin Lawrence's work was an influence on THE FOG and THE MIST (both John Carpenter and Stephen King are acknowledged fans) and the film ended up as MST3K's premiere episode in 1989.

Don't let that last fact fool you, though.  The film has been mocked for decades because of its blatant U.S. title, not a lack of quality.  Director Lawrence builds a genuine sense of dread and is able to successfully hide his low budget until TERROR's final act, when he's forced to employ the best special effects the funding will allow (subpar, to put it kindly) and to finally reveal what's been hiding in that cloud.  There's that word again--that's one gulp if you're playing along.


While THE TROLLENBERG TERROR is marred somewhat by the late breaking cheese factor, the flaw is nowhere near fatal.  In fact, to modern eyes the shortcomings only add to the fun.  It's also refreshing these days to see a reporter who isn't a sleazeball in his pursuit of the story and actually pitches in willingly at the climax instead of being a hindrance.

Elsewhere, Munro smiles and faints a lot.  Jayne cuts loose with a good scream in the final act but is properly reserved otherwise, and Mitchell looks and sounds Einsteinian.  But it isn't Mitchell who solves the problem--this is Tucker's show all the way.  This was the second of three sci-fi starring roles for the action stalwart in the late fifties, and all were British productions (the third was the rarely seen THE COSMIC MONSTERS, which TCM dusted off just last month).  After playing the greedy, unsympathetic "ugly American" butting heads with Peter Cushing in THE ABOMINABLE SNOWMAN, Tuck gets to play a more traditional hero this time out and delivers one of his most authoritative performances.

On top of that, it seems courageous enough for the guy just to climb up that mountain again after what happened to him in SNOWMAN and AUNTIE MAME.

Because it IS--and it has been since 2001.  The release of the widescreen European edition includes interesting liner notes (Tuck admitted he had trouble keeping a straight face when he saw the title monster) and the original U.S. theatrical trailer. 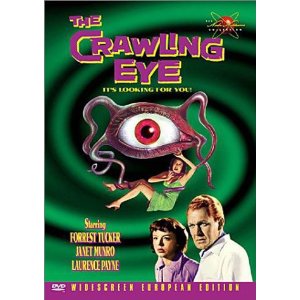 Wow, this sounds pretty spooky. (Except for the 'cheesy' monster at the end.) Another film I've never seen. I'm beginning to think I missed out on lots while growing up in the fifties. Or maybe I was just a very discerning kid. Ha!

I like Forest Tucker, especially in that TV western show with Larry Storch. Can't remember the title at the moment.

But I don't think I've ever seen him as a 'leading man' in a sci-fi picture. Maybe this one will be the first.

Great review, and very funny too. :)

I love The Crawling Eye, it's got such a weird atmosphere - eerie and campy at the same time. Also, let's not forget this guy's outfit: http://i.imgur.com/FBCdF.png

This is a funny review. I like your line about the drinks per minute being more than Dallas but less than Bewitched.

It's always a mild disappointment when a film can't get by any longer without showing the monster...and it's a big freaking eyeball or something equally ridiculous, but in a good movie it just makes the beginning where they use restraint and build tension that much more effective.

I haven't seen this since I was a kid when it was shown on NYC Ch. 11's Chiller Theater, but in CE/TT's defense, I was *very* psyched that monsters showed up at all. Sure, a bad effect in a zillion dollar flick should be called out, but CE/TT's budget never gives anything but a threadbare impression. As kids, we'd draw pictures of those Lovecraftian space monsters all over our notebooks again and again. They were great (and those noises they make? Yow!)
Great entry into the blogathon! Thanks,
--Ivan

Great review! I haven't seen this before but I have heard of it since it is featured as the first episode of Mystery Science Theater 3000.

Chris, I've seen the MST3K episode for this film...it wasn't very good...then again, it WAS their first episode.

Anyway, Hal? Amazing job! You're writing has a great blend of information, snark, and humor! I'm thrilled that you picked my humble blogathon as your first.

That Auntie Mame line cracked me up! Especially since that is the third time something about that movie has come up today. Creepy.

I didn't know that about MST3K. Because of that, I can't believe I haven't seen this one yet. Great review!

First, thanks everyone for reading and for the kind words. Participating has been a blast and I've found a number of great blogs to add to my reading in the process. :)

Yvette: ABOMINABLE SNOWMAN is also well worth watching for sci-fi fans. I haven't seen COSMIC MONSTERS in full yet (my DVR messed up) but what I saw was disappointing. Loved your review of I MARRIED A MONSTER BTW.

Nathanael: Thanks again for the invite.

The MST3K of CRAWLING EYE is currently available at Netflix Instant.

Loved your great, funny, beautifully written review. Your point about alcohol consumption is well-observed; I'm always astonished when looking at 40s-50s films how much social drinking was taken for granted (your drinking-game suggestion should be included in the liner notes in all future DVD editions!). The film packs in a lot of horror tropes in its short running time, including headless bodies, fainting psychics, zombies, threatened children, and lots of tentacles. I like the part when they throw Molotov cocktails at the monster; you can keep score of the hits. Hope that Tucker's other 2 horror films you mentioned are soon out on DVD; they sound like they're worth a look.

I've always thought the lousy title (how exactly does an eye crawl, anyway?) does Trollenberg Terror a tremendous disservice because it's not really all that bad...no worse than other sci-fi films of the period. And of course--one can never go wrong if Forrest Tucker is in charge (I coincidentally caught Tuck in a Rawhide rerun this early morning, in which he plays a hunter stalking a lion).

"I'd say on a 'drinks per minute' basis it's more than your typical DALLAS episode but less than an average BEWITCHED." I lose more keyboards that way.

"I'd say on a "drinks per minute" basis it's more than your typical DALLAS episode but less than an average BEWITCHED."

Okay, everyone's mentioned that line but it bears repeating. Actually, this review is well-stuffed with quote-worthy lines.

This is why I love blogathons. I get to discover fascinating new blogs I might never have stumbled across otherwise. It's like mining gold!

This was one of my favorite SCiFi theater pics as a kid~ I'd watch it everytime it was on. The parts when the headless corpses and zombie dude killer with the scar on his neck were on, were really eerie. And the mist freezing the cable gondola's uh, cable were tense and exciting. Tuck does a great job! Also Janet Munroe is dreamy! I had a mad crush-that's b4 I knew I was a "mo" mind you.

If you haven't seen this one you should!