We have Fox's MGM On Demand program to thank for the latest entries to move from "Why the Hell Not?" status to a release on DVD in the U.S.  Both are from 1974, right in the middle of arguably the peak decade for American cinema.  One is a long-awaited and particularly welcome arrival.  The other?  Eh, not so much, but it isn't without its points of interest.

The former is A.I.P.'s SUGAR HILL (1974), a gleefully ghoulish and campy variation on Pam Grier's revenge flicks for the studio, in which Marki Bey (THE LANDLORD) stars.  Rather than open up a can of whoopass herself, Bey enlists the aid of Zara Cully and Don Pedro Colley (as the best Baron Samedi to date) and their zombie hit men to fight the mafia responsible for the death of Sugar's boyfriend.  Bey is no Pam Grier or Tamara Dobson, but this wickedly humorous tale of evil colliding with evil is loads of fun in spite of its low budget and shortage of exploitation staples (it is rated PG).  The original review is here. 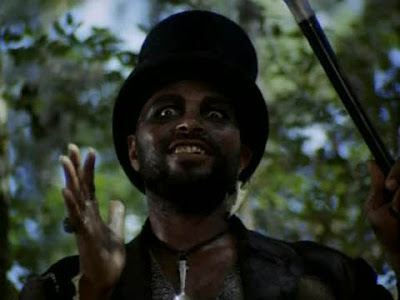 SUGAR HILL may lack a "name" cast, nudity and gore, but is still fondly remembered.  So much so that it has undergone a rediscovery in recent years, first with TCM Underground airing it in 2008-2009 and then more recently through streaming availability on Netflix Instant and Epix.  Now you can take it home with you for the first time---SUGAR HILL was never even released on VHS.  Movies Unlimited has this MOD available for preorder, with a release date of October 6, 2011--just in time for Halloween!


Already out is VAMPIRA (1974), retitled OLD DRACULA in U.S. theatres in an attempt to capitalize on Mel Brooks' smash YOUNG FRANKENSTEIN.  As you can see from the review, I feel VAMPIRA is a missed opportunity.  The intended comedy somehow has a much lower laugh count than SUGAR HILL despite a big star in Niven and a much higher budget. 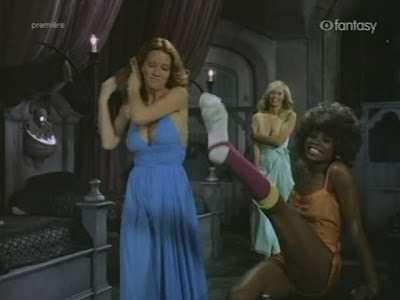 Even taking into account its many flaws, VAMPIRA does have an awful lot of PLAYBOY product placement, enough that I suspected Hugh Hefner was the executive producer at first.  The playmates are portrayed by several lovely actresses of the era who didn't make many films: Cathie Shiriff (in her debut, nine years before STAR TREK III); stunning Nigerian model Minah Byrd (PERCY'S PROGRESS) who tragically died young in 1995; and buxom Linda Hayden (TASTE THE BLOOD OF DRACULA).  And we can't forget Jenny Linden, can we?  The movie is also a must for fans of beautiful GET CHRISTIE LOVE! star Teresa Graves, who only made three feature films before retiring from show business at 27.

This one is already out and available at Amazon, under its U.S. theatrical title OLD DRACULA.  Happy viewing, and as always there's more reviews forthcoming here at The Horn Section.
Posted by Hal at 8:10 PM