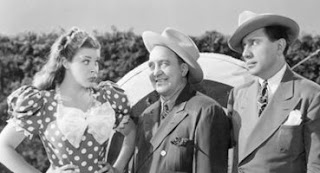 
Olson and Johnson return to Tinseltown with the longest running musical in the history of Broadway with HELLZAPOPPIN’,  but Universal insists on changing everything while translating it to the silver screen.  “This is Hollywood.  We HAVE to!”  Thus the literally plotless play must now have structure.  For starters, this means dual love stories crafted by writer Cook: for Raye and Auer, and for Frazee and Paige.  Meanwhile Olsen and Johnson resist the studio impositions in their unique way, shouting their own instructions at hapless projectionist Howard.

This quintessential Olson and Johnson vehicle is often compared to other kitchen-sink comedies: from the pre-Code DUCK SOUP and DIPLOMANIACS to the more modern groundbreakers BLAZING SADDLES and AIRPLANE!.   However HELLZAPOPPIN' is the most anarchic and surrealistic of them all.  Breaking the fourth wall?  How can you break it when it never really gets established here.  Screenwriter Nat Perrin had the requisite background (he got his start working with the Marx Brothers) and Olsen and Johnson appear only too happy to be skewering  Hollywood and the conventions of film.  The suits out west never really got their unrestrained comedy, and the team had been rejected by movie audiences for a decade.

“Any similarity between HELLZAPOPPIN’ and a motion picture is purely coincidental.”   Potter, Perrin and company take all of five seconds to demonstrate this.  The film opens with your normal production number with costumed dancers meticulously making their way down stairs...which quickly flatten, causing everyone involved to slide all the way down to Hell!  Which is, of course, a Poppin', with devils canning males and females until a taxi arrives to drop off Olson and Johnson.  "The first cab driver to go straight where I told him to!" 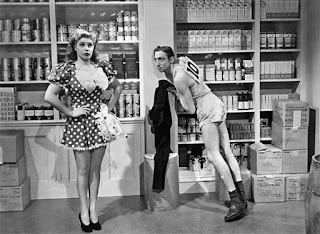 Whether making sly allusions to then current films like CITIZEN KANE, getting creative digs in at the Hays Office, or making subtle points about the merits (superior in the team's view, clearly) of a live performance, HELLZAPOPPIN' is consistently mind-bending and inventive for a just-right 84 minutes.  When Olson and Johnson are watching themselves onscreen and commenting with their backs to us, it's hard not to think of MST3K. 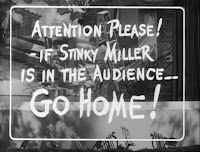 HELLZAPOPPIN' is helped considerably by musical numbers that are actually enjoyable. Whitey's Lindy Hoppers all but steal the show with a truly amazing number, even by the Hoppers' standards.  But the other songs are also enjoyable, and typically serve as backdrops to the continued lunacy, such as a deliveryman's incessant attempts to deliver Mrs. Jones' new potted plant and messages for children in the audience.  By 1941 standards, Mother probably didn't want them watching this anyway.

Apparently only one reason: legal issues.  Specifically, over the rights to the play and film versions and. apparently, between the Olson and Johnson estates.   The latter is especially disappointing, not to mention short-sighted, as this is the team's signature work and deserves a wider audience. 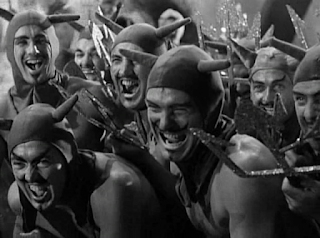 Well, OK, it is--in the U.K. and Australia only.  But everywhere else,  HELLZAPOPPIN' is largely unknown 70 years after its release.  The legal issues have kept the film off cable television and off VHS and Laserdisc for decades.  While the film stays in obscurity, so does the comedy team of Olson and Johnson, which is a real shame.  If the story of feuding between the estates is true, someone get these folks together!  It has to be easier than your typical sports labor deal.

A lost comedy masterpiece, and by far the prime example of "anything goes" film comedy in the period between the pre-Code early Thirties and the Mel Brooks and Monty Python era forty long years later. 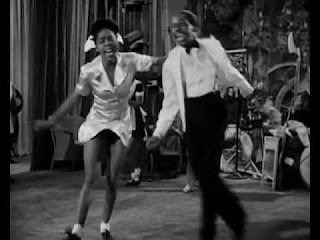 The jaw-dropping, gravity defying performance by Whitey's Lindy Hoppers (billed here as the Harlem Congaroo Dancers) which is arguably the best dance number ever committed to film.  The Hoppers were great in A DAY AT THE RACES (which had the added bonus of vocals from the incomparable Ivie Anderson) and the Nicholas Brothers were fabulous in STORMY WEATHER, but the HELLZAPOPPIN' jitterbug probably tops them all.

Bottom line: make this lost classic available in the U.S. on a remastered DVD!  Currently available at Amazon Instant for a fee.
Posted by Hal at 10:41 AM

And the sequence with the Black dancers and musicians would have been cut out of Southern prints. "Too bad we can't have _them_ in the show" -- even though they were in the original production.

Sad but true Elizabeth. The sequence in A DAY AT THE RACES suffered that same fate. A big reason that legends like Nina Mae McKinney and Josephine Baker relocated overseas at that time. Our loss, Europe's gain.