Up and coming: I will be guesting at Rupert Pupkin Speaks yet again.  Rupert's blog is one of my daily reads, and I strongly encourage you to follow the link and take a look.  You'll find lots of leads on the obscure, overlooked, and the very old there.

I'm honored to be invited to participate in Mr. Pupkin's many cinematic compilations, and in the process, I've reviewed many films there for prior guest posts that never made it here to The Horn Section.  Primarily because they're readily available on DVD.  Below is a "best of" compilation from my past Guest Posts there.  Stay tuned for another one soon!  In the meantime, check these out.  And if you'd been reading Rupert's blog all along, you'd have already read these!  Hint, hint.

VALLEY OF THE DOLLS has been revered as perhaps the ultimate Bad Movie We Love for 45 years. The differences? The screenwriters didn’t try too hard (I.e. the attempt Ellison and Co. made to create a new, hip OCEAN’S 11 styled language throughout 1966’s THE OSCAR) and we actually saw these performers performing, rather than just telling us how great they are for two hours without giving us any backing evidence. As a result, VALLEY OF THE DOLLS gave us reason to believe that these flawed people are also talented--even if all the signing in the film was dubbed.

Jacqueline Susann’s trashy novel became a trashy movie, but featured far fewer Oscar winners embarrassing themselves than the aforementioned THE OSCAR. The only honorees embarrassing themselves in VALLEY were a horribly miscast Patty Duke and Susan Hayward. The one truly professional performance is from TV journeyman Paul Burke (NAKED CITY), who manages to keep a straight face while squeezing Duke’s face and trying to make the 20 year old actress (playing 26) look “thirty-six” with puffy cheeks and bloodshot eyes from the Dolls and booze. DOLLS’ charm comes from a cast full of TV names, and Barbara Parkins and Sharon Tate are hilariously wooden in contrast to Duke’s hystrionics.  Special mention goes to Martin Milner, who actually appears to be phonetically reading his lines off a teleprompter, even when walking out on Duke’s Neely.

Everyone sleeps with everyone, everyone takes pills, and everyone gets swallowed up by Hollywood. Still, VALLEY OF THE DOLLS has been forgiven, probably because it’s been a consistent money maker while THE OSCAR was a notorious financial flop. No matter, they’re both trashy and overblown and downright lovable. 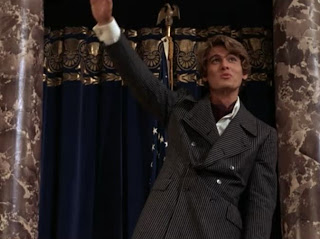 Satire about the youth revolution succeeding and putting a President in place who is a younger, urban version of Lonesome Rhodes, only more adept at manipulating The Game. As a matter of fact, he makes the career politicians look like amateurs. Implausible government takeover? Hell, try mathematically impossible.  We're told early on that 52% of the USA is ‘under 25’.  Still, even if the voting age is lowered to 14, that still excludes those 13 and under, which would have to be at least half of that "52%"--26% of the country's population remains at best, right?  Therefore, even if we assume that those aged 14-24 vote for him unanimously, Christopher Jones’ Max Frost still wouldn't have enough votes to win even a three-way race (which would require a minimum of 33.34%.  The 24 year old singing idol Frost also comes across as way too sexist to inspire complete unity, even by the standards of the era.

Okay, so there’s plenty here that is out of the realm of possibility, which means that this satire ain’t exactly  DR. STRANGELOVE.  WILD IN THE STREETS still has its moments, with more thought provoking elements than you‘d expect in a film by AIP.  For example, check out the uncanny foreshadowing of Kent State. Jones, who should have had a bigger career, is much more charismatic than his character. Look for a young Richard Pryor, Kevin Coughlin, Millie Perkins, and Hal Holbrook channeling JFK as the candidate seeking the “youth vote“ and getting far more than he bargains for.

WILD IN THE STREETS is available for viewing on Netflix Instant.  "Max Frost and the Troopers" ended up with a memorable hit from the film's soundtrack, "Shape of Things to Come".

Mel Brooks lost something when he stopped collaborating with Gene Wilder and gave himself more time on-camera after the twin triumphs of BLAZING SADDLES and YOUNG FRANKENSTEIN. The result: SILENT MOVIE and HIGH ANXIETY, both pretty funny but increasingly repetitive and self-indulgent. It was at this point of diminishing returns that Brooks decided to try the sketch movie, a genre that even at its best (KENTUCKY FRIED MOVIE, GROOVE TUBE) is undisciplined by its very nature. From a filmmaking standpoint, HISTORY OF THE WORLD PART 1 is an absolute mess, with the least successful segment (the Roman empire) lasting the longest and the opening segment building little momentum with one clunker after another. 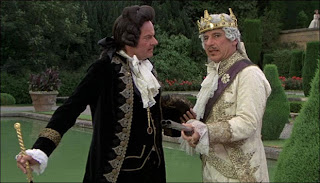 HISTORY is sloppily made with clumsy attempts to tie things together (“Miracle!”), Brooks mugging shamelessly and giving himself a half dozen roles, and (with collaborators like Andrew Bergman, Richard Pryor and Wilder missing) more toilet jokes than ever before. Why on earth does this effort get some love? The second half. No, the narrative doesn’t improve, but Brooks’ Spanish Inquisition by way of Busby Berkeley almost reaches the heights of “Springtime for Hitler”. Then he gives us a French Revolution that is tasteless, childish and very quotable (“Wait for the shake!” “It‘s GOOD to be da King!”). It’s never gets any less slapdash, but HISTORY OF THE WORLD PART 1 finally wears you down and makes the jump from painful groaner to guilty pleasure in its final 45 minutes. “The King and the Piss-Boy” might not quite have the same ring to it as “The Prince and the Pauper”, but Brooks proves that he can’t go wrong even when he isn’t going right. At least that was the case until LIFE STINKS, anyway. 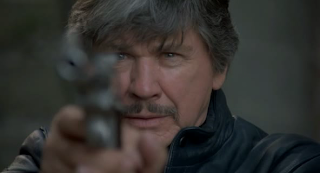 November 1985 began with DEATH WISH 3 atop the box office and ended with ROCKY IV’s record setting opening weekend, making it the ultimate month for 80’s action. Both featured iconic action heroes embracing the times and becoming larger than life superheroes. With Paul Kersey’s entire family completely wiped out by his third cinematic adventure, he’ll have to make do by dating a DA young enough to be his granddaughter and avenging an old war buddy who somehow smuggled two Browning machine guns home from Korea (and past the cops’ strict “no gun” policy). Absolutely nothing in DW3 makes sense: Kersey orders rocket launchers and elephant guns through the mail, executes a purse snatcher with the latter to the cheers of an entire neighborhood, and knocks out men one-fourth of his age with a single punch.  In perhaps the biggest stretch of all, Kersey tells us that boiling cabbage “smells wonderful“. A complete riot literally and figuratively from beginning to end, DEATH WISH 3 becomes a little more entertaining with each viewing. The very definition of a Bad Movie We Love.

Paul Kersey singlehandedly reduced New York City’s population by about ten percent in his third outing.  Meanwhile, there’s only one death in 91 minutes during ROCKY IV, but don’t think the 147 to 1 disadvantage in screen deaths makes Balboa’s fourth outing any less outlandish than Kersey’s third. After all, Balboa gets more ripped at age 40 than he ever was before, and does it with good old fashioned lumberjack work and mountain climbing while opponent Ivan Drago needs all the steroids he can get despite being 15 years younger, 70 pounds heavier and 10 inches taller. Gee, if Rocky had only trained in Siberia a decade earlier. 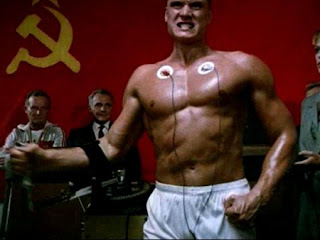 RAMBO aside, Stallone also shows us he’s a pacifist at heart(!), articulating (sort of) that “it’s better for two guys to be killing each other than 20 million” and winning the Cold War singlehandedly. His post fight speech gets a standing ovation from Gorbachev himself! Well, okay, the fake Gorbachev, looking like Frank Drebin just got through with him. More reliant on montages and more exaggerated than ever, ROCKY IV is so high comedy that Brigitte Nielsen’s accent isn’t even one of the 10 funniest things here.

After these antics, both Bronson and Stallone almost sheepishly tried to scale things back with their respective subsequent fifth installments (DEATH WISH 4 was also over the top, but couldn't match DW3--what could?). Still, we can all be thankful these long running franchises simultaneously embraced their inner cartoons for these classic time capsules of Eighties hubris. Watch them as a double feature, and for maximum recreation of the time and place, spin ZZ Top’s “Afterburner” during intermission.

I realize the past decade has more or less been the Age of Apatow, but yours truly hasn’t really been drinking the Kool-Aid.  To name two examples, I have yet to give KNOCKED UP or THE 40-YEAR OLD VIRGIN a second viewing.  But there is one film in his canon that would make any list of my favorite re-watchables: WALK HARD, a riotous spoof of virtually every music bio Hollywood has produced since 1978's THE BUDDY HOLLY STORY. John C. Reilly is pitch perfect as the titular character, burdened with the responsibility of becoming “double great” for him and his deceased brother (whose death he feels responsible for). 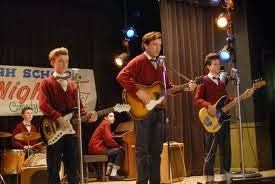 WALK THE LINE seems to be the biggest inspiration for the first decade of Dewey’s superstardom, but Mr. Cox crosses paths with as many music genres as movie clichés before his STORY ends.  In the process he becomes a Forrest Gump for a half century of popular music from rockabilly to rap, providing one gut busting laugh after another for WALK HARD’s lean 97 minute (theatrical cut) running time.  The satirical targets are varied and inspired: fiftyish Kevin Spacey’s insistence on playing the twentyish Bobby Darin at all life stages during BEYOND THE SEA, Gary Busey and Company winning over an all African-American audience in the Fifties (the aforementioned BUDDY HOLLY STORY), and LSD’s not-so-positive effects on musicians not named The Beatles (i.e. Syd Barrett). 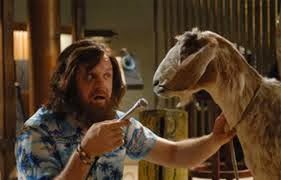 Through it all, Reilly brings his A-game on and off the microphone. It’s helped a great deal by Apatow’s ceding of the director’s chair to Jake Kasdan, who eliminates some of the former’s usual excesses (even if he includes a few penis jokes too many in the final cut). The director’s cut (23 minutes longer) is even more worthwhile, with some priceless digs at the disco era (including cameos by Patrick Duffy, Cheryl Ladd and Cheryl Tiegs!) that theatre audiences missed.   You’re likely to find a new highlight the first several times you watch, whether it’s John Michael Higgins’ impatient record executive, Tim Meadows’ unconvincing drug warnings, or the life-saving power of blankets. Whether the failure of WALK HARD to light up the box office was poor timing (a Christmas weekend release?) or improper marketing focus, it is a “so dumb it’s smart” classic that certainly ranks as the best spoof movie of the past decade.  My DVD recommendation is to buy the director’s cut.  It isn’t edited quite as well, but you’ll get your money’s worth in the many extras, and the theatrical version is also included.  A great soundtrack too, led by the titlular tune penned by Marshall Crenshaw ("Someday, Someway").
Posted by Hal at 5:31 PM