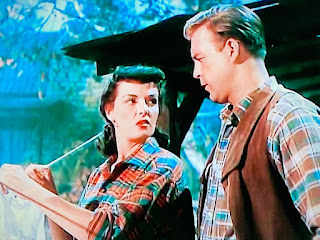 MONTANA BELLE (1952 RKO) Starring Jane Russell as Belle Starr, Scott Brady as Bob Dalton, George Brent as Tom Bradfield, Forrest Tucker as Mac, Andy Devine as Pete Bivins, John Litel as Matt Towner, Ray Teal as Emmett Dalton, Jack Lambert as Ringo.  Written by Horace McCoy and Norman S. Hall.  Directed by Allan Dwan.
The Daltons are concerned to see Brother Bob riding up to their Oklahoma hideout (owned by Mac and native Ringo) with fugitive Belle Starr.  With good reason--Bob just rescued her from a necktie party after she was widowed in a shootout.  The Dalton brothers are targeted for apprehension by banker Towner and saloon owner Bradfield, with the latter agreeing to use "The Bird Cage" (for $100,000) to trap the brothers. 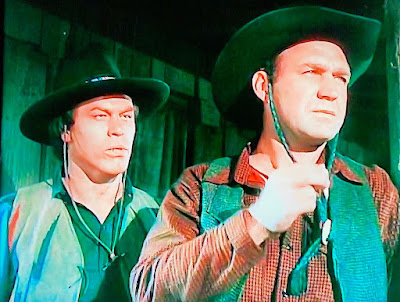 Taking the saloon's safe full of cash as bait, the Daltons plan a heist, excluding the owners of the hideout and Belle.  The Cherokee discover the hideout while the brothers are away, and Belle, Mac and Ringo are forced to flee.  Thinking they were double-crossed, the trio promptly beats the Daltons to the punch on the Bird Cage robbery, forming competition that they feel can fly under the radar with the better known gang in the law's crosshairs.  Belle adopts the alias Lucy Winters and a blonde look to case the joint with her new partners, but the masquerade brings a new, unknowing associate--Bird Cage owner Bradfield ends up losing $25,000 to "Lucy" at blackjack, making her half owner in his saloon. 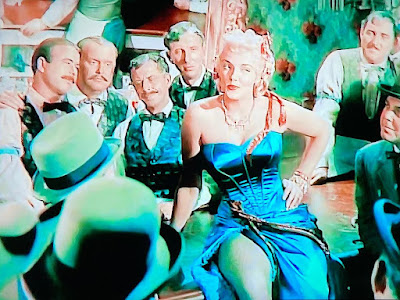 Judging from contemporary photographs, Belle Starr was always played by actresses far more photogenic than she was in real life.  Jean Willes memorably played Starr on MAVERICK, Gene Tierney got the titular film in 1941, and in MONTANA BELLE, the outlaw is played by an actress as iconic as Starr herself--Jane Russell. 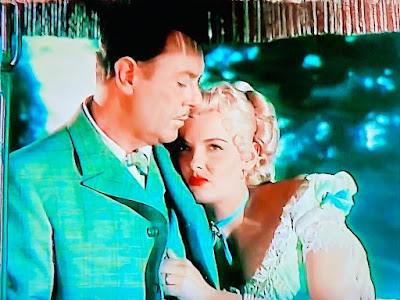 Russell was under contract to Howard Hughes throughout much of the 1940's, and the notoriety from her debut in THE OUTLAW and scarcity of her film appearances should have made MONTANA BELLE an event: seven years had passed since THE OUTLAW was filmed and Russell had only made two films in between, YOUNG WIDOW and the not-yet released THE PALEFACE (soon to be a 1948 holiday smash). 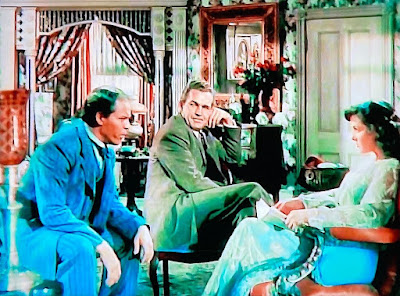 MONTANA BELLE sat on the shelf for four years after it was filmed in the Fall of 1948, changing hands from Republic to Fidelity to RKO in the interim.  The reason for said dust-gathering?  Ever conscious of image, Hughes himself kept MONTANA BELLE on the shelf, thinking that this more modestly budgeted Western would be seen as a step down for his protegee if it followed her popular teaming with Bob Hope.  In addition, following Calamity Jane with Belle Starr could have had the unintentional effect of pigeonholing the star into an unwanted niche.  Hughes sat on it 'til the time to release it was "right", which unfortunately had BELLE pegged as a D.O.A. dud when it finally arrived in 1952. 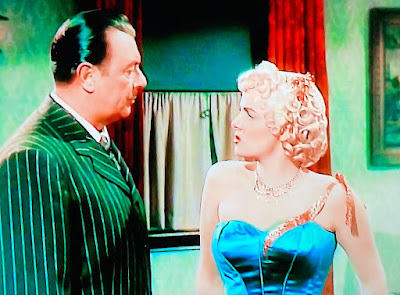 Which is a shame, since veteran Allan Dwan (THE WILD BLUE YONDER) embraces the increasingly contrived situation created by the McCoy-Hall script.  Russell certainly gets the star treatment--every man wants Belle, with Tucker and Brady fighting over her and Brent ga-ga enough to (intentionally!) lose $25,000 to her at blackjack ($669,000 today, not exactly chicken feed).  Best of all, Dwan gives Belle's fair-haired alter ego two musical numbers, and seeing Russell strutting her stuff to The Gilded Lilly is the film's undisputed highlight and Jane's first chance to sing onscreen. 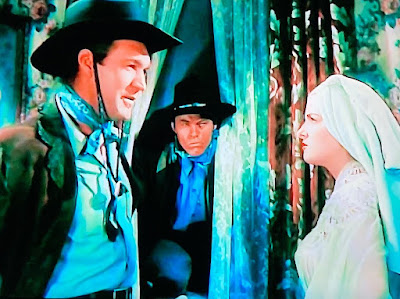 Action was usually Dwan's forte, but the McCoy-Hall script supplies precious little of it and the director isn't at his best when the rare opportunity arrives.  The intended climax of the bank robbery falls completely flat--you'll wonder how the hell the Daltons were ever successful at this crime thing ("We'll just walk out of this town"--uh, yeah, that's gonna happen...).  MONTANA BELLE shows a feminism well ahead of its time as Starr's partners defer to her judgement, but some of those decisions warrant a bit more questioning and the film ends abruptly after the less than thrilling heist. 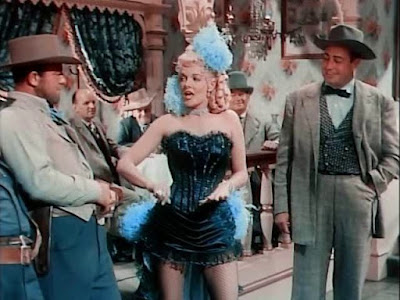 As complicated as its history and certainly more complex than it needs to be, MONTANA BELLE is nevertheless an opportunity to enjoy Jane Russell in her absolute prime.  Fortunately, the smoldering star is in top form and appears to have great fun as "Lucy", on and off stage.  She's helped by several western stalwarts either on the road to stardom (Tucker and Brady became big names in the interim between filming and release) or delightfully chewing the scenery (Devine).  Lacking action and logic in equal measure, MONTANA BELLE isn't good--Russell called it "dreadful" years later.  But I think she was being too harsh.  Russell keeps it watchable through the artifices, and the film goes down easy enough in Trucolor.  Good luck remembering anything except Jane afterward, though. 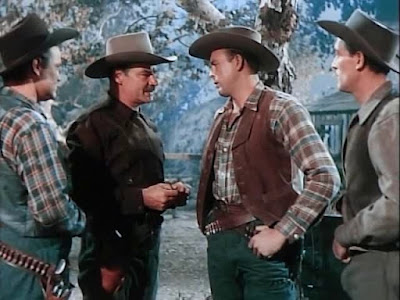 So....why isn't it on DVD/Blu?
MONTANA BELLE was widely perceived as a flop (the box office was actually decent as Russell was a big draw in 1952) due to its lengthy time gathering mothballs and frequent change of hands.
Why it should be on DVD/Blu:
Hey, it's Jane freaking Russell, folks.  Her films were limited (in part by her Hughes contract) as she starred in only 18 during her 1946-1957 prime, so we certainly should have the opportunity to enjoy them all.  This one might not have a good script, but it has a great supporting cast and a star living up to her stature.  MONTANA BELLE last surfaced on TCM in 2020, so a return trip isn't out of the question.
Posted by Hal at 8:34 AM