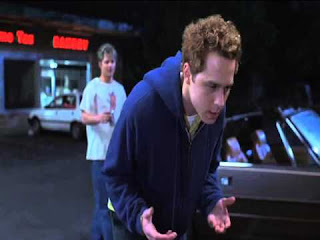 
Five young adults in fictional Burnfield spend evenings hanging out together, mostly outside the convenience store managed by Shoaib and Naidu.  They're a disparate bunch: Zahn's a fun loving and immature slacker, Katt's a violent and possibly alcoholic ex-military man, and Ribisi's the intelligent cynic finding fault with any form of accomplishment.  Ribisi's girlfriend Carey isn't, and she'd like to leave and pursue her art career.  Recovering addict Waters is the clique's recent addition, and they all await the triumphant return of Bartok, the nerd from high school who found success as a rocker.  In town for a concert, Bartok decides to visit the old gang and brings publicist Posey back home with him.

Boomer Eric Bogosian (TALK RADIO) adapted SUBURBIA from his stage play of the same name which was based on his own experiences in suburban Massachusetts.  However the resulting film is much more identified with its director and the "Gen-X film" subgenre of the Nineties.  As was the case with his earlier cult favorites (SLACKER, DAZED AND CONFUSED) Linklater filmed in Austin, Texas and turned out yet another film taking place over the course of one day, following verbose characters around the city.  However, that's about it for this trilogy's common ground. 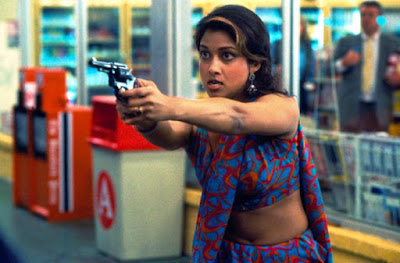 Linklater penned the screenplays for SLACKER and DAZED himself and provided insight while largely avoiding the angst that characterized (and has in many cases dated) other 1990's touchstones like REALITY BITES and SINGLES.  Despite its title SLACKER subversively celebrated the resourcefulness and self-sufficiency of its eccentrics, and Linklater makes subtle statements about freedom and individuality in both films (i.e. Randall "Pink" Floyd's refusal to sign the pledge).  But while SUBURBIA's Ribisi pointedly insists that he can do anything he wants, he's all talk, still living in his parents' garage in his mid-twenties.  This is the pessimistic B-side of SLACKER: formerly creative, offbeat youths have hardened into cynical, frustrated underachievers in just a few years.  It is telling that, unlike its Linklater predecessors, SUBURBIA takes place almost entirely after dark.


Bogosian's troubled, high-strung dialogue often doesn't mesh well with  Linklater's laid-back storytelling.  Most of the characters wear out their welcome by the one hour mark, though your mileage may vary on Ribisi's indecent exposure.  We keep expecting an explosion out of this volatile mix, such as Bartok finding out you can't go home again (a la Mellencamp's FALLING FROM GRACE).  Or Posey biting off more than she can chew due to her case of bad-boy syndrome.  Characters tiptoe to the edge several times only to have nothing come of it. 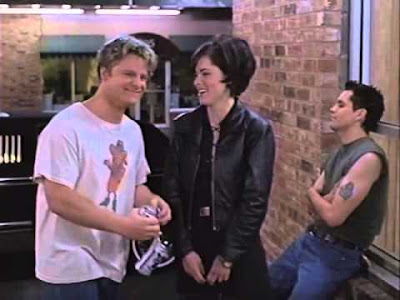 For a while SUBURBIA is fascinating and avoids the expected.  Unfortunately the overwrought conclusion really detracts from Bogosian's point, verbalized by Naidu: that (in the eyes of an immigrant especially) Ribisi and company are throwing their lives away.  Naidu's words would have been more effective without the literal evidence; ironically, if the film ended with "just another day" in the books (like Linklater's aformentioned screenplays) it could have driven Bogosian's message home more forcefully.  While Naidu's last word may not resonate, he still gets the film's most memorable line, in retort to Zahn's proud announcement that he is moving to L.A. ("They have lots of convenience stores for you to stand in front of.")


Katt (whose character is considerably more intelligent than most of his words and actions) and Zahn (hilarious one moment and exasperating the next) are in particularly fine form; the latter was a holdover from the original stage cast.   SUBURBIA has its perceptive moments, but in the end the whole is less than the sum of its parts and it falls short of the filmmakers' other works. 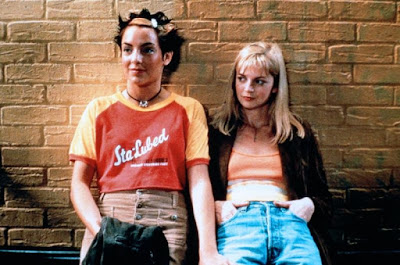 Despite the involvement of Linklater, Bogosian and several up and coming young actors, SUBURBIA was barely a blip at the box office in 1996.  SLACKER was fresh and new in 1991 but "slackers" were fully played out five years later, with the aforementioned BITES and Kevin Smith's CLERKS and MALLRATS among the many films covering this subgenre in the interim.  As is the case with many films arriving late in a particular wave, SUBURBIA has been lost in the shuffle.

With its basically unlikable and often annoying characters (arguably the lone exception is the tentative Waters) and downbeat ending, SUBURBIA isn't that rewatchable.  In fact, it can be a chore to sit through.  By contrast, each viewing of DAZED AND CONFUSED is like visiting an old friend.

Okay, it isn't quite the "before they were famous" smorgasboard that DAZED is, but Zahn, Katt and Ribisi were among those headed for bigger things, and cult fave Parker Posey is the Queen of the Indies.

Potentially interesting extras; ideally, we'd get a commentary from Bogosian and Linklater together, and find out what each thinks of the adaptation fifteen years later.

SUBURBIA is currently available at Netflix Instant.
Posted by Hal at 6:15 PM