Twenty-five years ago today: May 30, 1986.  Having already given us new releases starring Lee Marvin (THE DELTA FORCE) and Charles Bronson (MURPHY'S LAW) earlier that year, Cannon further cemented its credentials as the home of the geezers of action with the great Forrest Tucker's final theatrical film, THUNDER RUN.

Reviewed here at The Horn Section for its 20th Anniversary back in the early days of our blog, THUNDER RUN remains unavailable on DVD in the U.S.  It's still a shame. 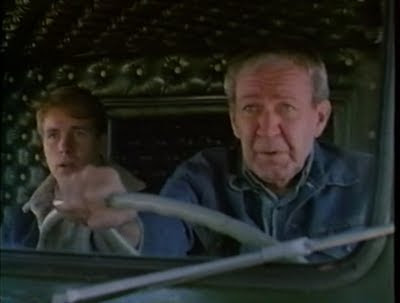 True, THUNDER RUN had plotholes Tuck could have driven "Thunder" through.  For example, no one noticed the pickup truck in the back of the 18 wheeler while loading the cargo?  Director Gary Hudson also spent way too much time on the unrelated hijinks of his more youthful cast members before giving us what we really wanted: Tuck taking on scar-faced, heavily armed terrorists on a lonely desert road.

Doesn't matter.  The gloriously goofy and action packed second half more than makes up for the flaws.  Where else will you see an 18 wheeler jumping a train, or VW dune buggies armed with heat seekers?  Enjoy the trailer full o' cheese above, and hope that THUNDER RUN either finds its way to DVD or Netflix Instant soon so we can all rediscover it.

Its so Nice blog! i have a topic related to used train horn kits for sale and more about of train horn, nathan train horns sale, automotive train horns.

The force of the steam pushing through the whistle made a distinctive train whistle sound when became familiar to everyone who ever came in contact with a how to build a train horn.