Inept NASA janitors Moe, Larry and Curly-Joe decide to help scientist Anna-Lisa after her latest failure at developing a fuel formula.  The bumbling custodians wreak havoc on the mission rocket and end up accidentally launching themselves as America's first space travelers.  After landing on Venus, they encounter a friendly talking unicorn, a fire breathing tarantula and the planet's computerized leader. The latter clones our heroes, setting up a battle with their evil robot replicas.  Finally the maintenance men make it back to Earth, returning to a hero's welcome and a high society party.  Uh oh.

With short subjects no longer in production and the Three Stooges hotter than ever in 1959 thanks to television, Columbia fulfilled one of Moe's longtime wishes--a legitimate shot to make full length features.  HAVE ROCKET, WILL TRAVEL was obviously rushed out to capitalize on the Stooges' resurgence and perhaps as a result many longtime Stooge collaborators are nowhere to be found.   The sci-fi spoof is written by Rafael Hayes and directed by David Lowell Rich (A LOVELY WAY TO DIE); both specialized in westerns and crime dramas and neither had much of a background in any comedy, much less Three Stooges comedy. 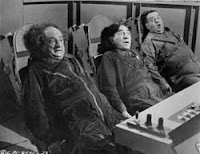 At a short 76 minutes HAVE ROCKET, WILL TRAVEL feels more like three different two reelers shown in sequence than a standalone feature.  Specifically, it's as if two slightly below par Curly shorts are bookending one of the better Joe Besser sci-fi efforts.  The opening third at the space center is reminiscent of any number of Curly/Shemp shorts with the trio being employed as handymen, with particular homage paid to A PLUMBING WE WILL GO.  It's familiar but executed well enough.  The Venus section is loaded with cheesy charm if lacking in fresh gags.

The film is topped off with a truncated celebration much like the party in HOI POLLOI, which was already long past its first remake (HALF WITS' HOLIDAY, Curly's 1947 swan song), and it had to be disappointing to kids in 1959 to see this setup without the obligatory "pie fight" payoff.  Despite this oversight (gotta keep the running time short enough for a double feature, eh Columbia?) there's more slaps and headknocking in HAVE ROCKET WILL TRAVEL than the aging Stooges would have in their subsequent movies (Moe was 62 and Larry 57)--in fact, this film probably contains the very last eye poke from Moe, as that part of the routine was soon retired due to fears of children imitating it.

This was Joe DeRita's debut as the third Stooge.  While his attempts to imitate Curly's vocal mannerisms are ill-advised, they are brief and would (thankfully) be missing from the rest of the team's comeback efforts.  DeRita was still settling into his role at the time of HAVE ROCKET and while he's no Curly (who could be?) he proves to be a solid old vaudeville pro who fits well overall with this more mature version of the Three Stooges and reestablishes some of the chemistry that was lacking in the Besser shorts.

The Three Stooges took a couple of tries to really hit their stride in the Curly Joe era.  After the big-budget misfire SNOW WHITE AND THE THREE STOOGES (1961), longtime Stooge collaborators such as director Edward Bernds, screenwriter Elwood Ullman and ace utility player Emil Sitka were brought aboard and the stories became more appropriate for feature length while continuing to liberally lift gags from the team's heydey.  None of these films quite reached the level of the Curly two reelers (and the boring romantic subplots continued), but the four flicks from 1962 to 1965 are all worth watching, with the 1965 finale THE OUTLAWS IS COMING! being probably the best of the bunch and allowing the legendary comedians to go out on a high note. 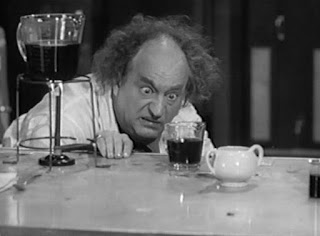 This one is a puzzler, because virtually everything Stooge related is available, including all of the Columbia shorts and the other five Curly-Joe full length features. HAVE ROCKET, WILL TRAVEL stands alone, undeserving of its isolation. 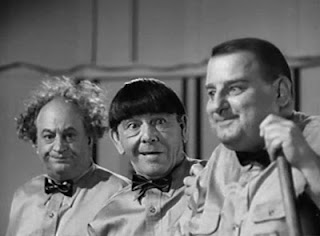 Okay, so there's the creative missteps, the rushed quality and the lack of longtime Stooge cohorts. On the plus side HAVE ROCKET, WILL TRAVEL also has the least intrusive romantic subplot of the Curly Joe era.  Neither the best nor the worst latter-day effort from the team, it would certainly be welcomed to DVD by Stoogemaniacs--much more than the awful and demeaning "Fake Shemp"/Joe Palma concoctions and the mostly subpar Besser two reelers.
Posted by Hal at 10:41 AM

I loved this movie as a child. My favourite quote comes from this movie, "How do we get out of here?" Moe, "Push Buttons!"

"Have Rocket, Will Travel" IS on DVD, as part of Sony's Three Stooges Collection, volume 3, which also includes solo shorts by DeRita, Besser, and Shemp Howard, plus a couple more Stooges features.

Jim Hutter said...
This comment has been removed by the author.
2:04 PM

The low-budget production is especially apparent in the space flight scenes. An asteroid whizzing by appears to be a moldy orange!

Jimmy Razor, You were expecting Forbidden Planet? The motion picture studio wanted to exploit the 3 Stooges popularity with the least amount of expenditures to reap maximum returns. Just as the boys never received a raise since the 1930s before their contract ended.

I saw this movie rerun a few months ago on MeTV's SWENGOOLIE, and I remember seeing it on tv when I was a teen. Although there was no pie fight payoff, I love how Curly-Joe & Larry nailed Moe w/ cream pies at the end. Moe deserved it most for his general nastiness over the years. He was always my least favorite Stooge.

Jon, When it was an independent station, KTVU Channel 2 Oakland/SF for a time showed an hour of Stooges. Curly Howard 2 reelers weren't many in number, (but enough to know about the later remakes with Besser), I saw almost all of the Shemp episodes (as a result he became my favorite Stooge) if not everyone, plus all of the Joe Besser years. The live action host of Sir Cedric's Castle children's show (didn't last long, if I recall it was replaced by back to back Stooges Hour) was in the Outlaws Are Coming as an outlaw and his show was canceled shortly after he went on hiatus, The Stooges made an appearance on the long term live action show Captain Satellite (probably to promote on of the movies), unfortunately I missed that show. (A photo from the appearance with the host Capt Satellite/Bob Marsh exists, he left children's TV and eventually became a child psychologist; ironically as there was an urban legend that he got out of his contract with, "That ought to hold the little bXstXrd for another week" similar to the Radio blooper of the guy who read the Newspaper Funnies (Cartoons/Comics), Uncle Don who never actually said it either. It was a great time to be a kid, Though Joe Besser wasn't Curly, Shemp, or even Joe DeRita, but I don't see all the hate he receives. Moe and Larry were stuck with him and getting too old for prat falls and the slapstick they made famous. As a young child, they were perfectly fine. That was years before the Besser=Gay Stooge, which in some ways funny, he was just doing his Bad Little Boy "Stinky" Act which was scene on the Abbott and Costello Show. I saw (didn't have a VHS Tape) Lou Costello do the Clam Chowder gag of Curly, and when if it was an homage (as a memorial or just a recognition) of the Super Stoage.

Jon, renshen, thanks for reading and for the comments! Glad to see this one on DVD now in the years since I wrote this, and I was really glad to see Svengoolie give it some love too.

And I don't think Besser deserves to be hated on either. I think deRita was a better fit, but the Besser era did bring a few new ideas to the table. I thought the depiction of Besser in the 2000 TV Movie was really uncalled for.

The TV Movie was typical Hollywood BS, rewrite of history. The boys (and their wives) first personal appearance, upon arrival by train wondered who the VIP was at the station. The crowds were there for them; Movie, no body at the station, Jerome Howard's last days depicted as his brother Moe was taking advantage of his image and name (never happened), when in fact Curly finally had a marriage that was happy and a young daughter he loved. The movie depicts Besser refusing to get hit, and Moe says get DeRita. Joe Besser enjoyed his time with the Stooges, couldn't say enough good about Larry, and only left the group because he needed to stay with his wife after she had suffered a heart attack in November 1957; Joe was wouldn't abandoned her behind and go out on the road.
Joe Besser in an interview, "Moe and Larry, they were the best. I enjoyed every minute of it with them. In fact, to show you how wonderful they were, I never liked to be hit with anything. And Larry would always say to me, 'Don't worry Joe, I'll take it.' Now that's the kind of guys that they were. In the last short filmed (if not shown), Larry and Moe give Besser the full Stooge treatment and then some in which he took it like a Stooge (That was the Flying Saucer Photograph short).
Joe DeRita was a perfect fit, both in personal appearances and in the movies. After Moe's health failed, he kept the act going on the nightclub circuit (the audience was too drunk to realize "Moe" wasn't Moe Howard (Frank Mitchell subbed for the "first stooge") until Joe's diabetes caused him to retire (he began to lose his eyesight).
Joe Besser as 3rd Stooge plays in the 2 reeler that is Dan Blocker's first film (misnamed Don Blocker) playing the electrified zombie. The Three Stooges may have been 5'5" in height, but they were giants in my eyes. They never gave up even when scared half to death (overcame gangsters, monsters, ghosts, gorillas), always would pitch in to help someone in distress, and didn't let a lack of knowledge stand in the way to invent rejuvenation pills, rocket fuel, plumbing, time machines (and Hercules). Soup to Nuts was thought to be lost (a negative of the film was found in UCLA), they starred on TV, cameo appearances in movies, played supporting roles with A-List Actors in Hollywood. I am thankful for the internet, VCRs/DVDs, and cable TV for being able to see some of the genius performances that were never shown in 1960's childhood.