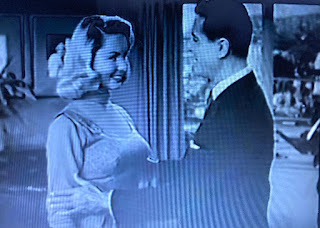 SERIES OVERVIEW for LOVE THAT BOB (THE BOB CUMMINGS SHOW) at this link.
It's tax time again, and Bob has hired "genius" Harry Morton to do his, on a recommendation by George Burns.  Harry has plenty of corny jokes, and also some bad news: he doesn't think the government will accept several of the deductions.  Specifically, entertainment expenditures that coincidentally are limited to 'feminine business associates'.  Bob tries to provide Harry with the receipts (and then some) but working at either man's office proves to be problematic, leading the shutterbug to the Morton household. 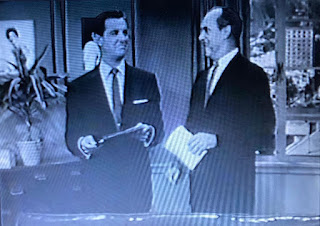 Blanche Morton is charmed to meet the Playboy--to hubby Harry's annoyance.  And to Bob's as well, once Mrs. Morton and Gracie Allen start conspiring to find the eternal bachelor a wife.  How could Bob possibly complain?  In pleading his case to Harry, he portrays himself as an innocent victim "forced" by the nature of his profession into constant contact with beautiful women.  Wouldn't successful matchmaking put an end to any suspicions about his business? 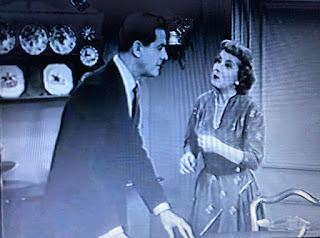 HARRY: "I must admit, I did not have a true picture of your activities"
BOB: "Thank goodness."
HARRY: "What?"
BOB: "...that you understand!"
We all know that Bob Collins' profession allows him to live the dream, but---being able to get off a tax write off for a considerable number of his dates?  Chalking up some rather significant gifts to those beautiful models as business expenses?  Forget that smoking jacket, Hugh Hefner should have been wearing Bob Collins pajamas. 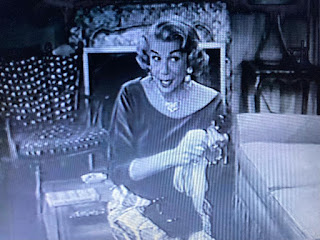 Reinforcement of Collins' legendary status abounds, with both Blanche Morton and her friend Gracie Allen going ga-ga over our lascivious libertine.  But Bob Meets the Mortons has an ulterior motive: an excuse to cross our playboy over to the world of BURNS (our executive producer) AND ALLEN.  The premise serves both purposes fairly well for a while, with Harry harried by Bob's beauties and Collins capturing the imaginations of both long-married BURNS AND ALLEN ladies. 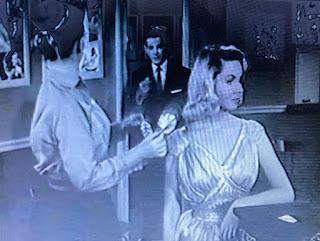 HARRY: "This was a bad investment?"
BOB: "Oh yes, that was a total loss." (sotto) "She turned out to be married."
The premise only starts to wobble when Schultzy turns out to be that good friend of Gracie's getting fixed up.  If they're really close, surely Gracie knows about the boss she's been pining for!  To be fair, illogical logic does seem logical with Gracie involved.  Still, the momentum of Bob Meets the Mortons stalls with it, as the 'blind date' rings as false as Blanche's 'comeuppance'.  And why Blanche, when Gracie had the biggest hand in it?  At least the denouement is a complete home run for Bob the Stud--laying one on another man's wife with the husband's complete approval?  He's The King!
Bob's success with the I.R.S. remains unsettled at the fade-out, but for his next round a year later, Morton was nowhere to be found in Bob Retrenches.  Given the result of Collins' faceoff with a humorless I.R.S. agent (played by ever-mean Charles Lane), Bob should have given Harry a call.  (Perhaps Mr. Morton really was pissed about Blanche's reaction to the kiss?)
After we've seen Gracie and both Mortons, it's only natural that George Burns arrives in the final minutes to wrap things up.  Cummings (as Bob Collins) returned the favor in A Marital Mix-Up three months later on BURNS AND ALLEN.  Both series were on CBS during 1956-57, but LOVE THAT BOB moved to NBC in the fall of 1957, stopping further crossovers until George Burns took his new series to that network the following fall.  Cummings appeared in the season and series opener of the new GEORGE BURNS SHOW (Gracie retired in June 1958); meanwhile Burns and Harry Von Zell both visited BOB twice during the 1958-59 season, which turned out to be the end for both shows. 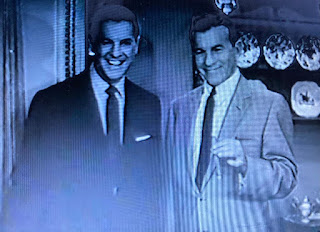 DID BOB SCORE?
Frequent querida Shirley Swanson was his date on consecutive evenings, with Bob keeping her out late enough to tire her the night preceding our proceedings.  Judging from the smooches in front of Schultzy, the man was surely in like Flynn at least one of those nights.
WHO WAS BLOCKING?
I guess we could consider Gracie to be making the all time obstruction by bringing marriage into play, but she only joins a long list of vanquished foes in that endeavor. 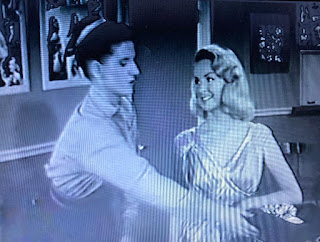 THE BOTTOM LINE:
The rapid banter flows more smoothly than the plot, but this mixing of McCadden worlds provides a worthwhile number of laughs before an awkwardly abrupt resolution.  The only chance to see all four BURNS AND ALLEN principals in a LOVE THAT BOB setting would be worthwhile for that alone, but this is a pretty good episode in its own right, with everyone getting in on the verbal wit.  Slightly better than Bob's aforementioned tax adventure the following season but can't avoid that gimmicky feel in its second half. (**1/2 out of four)
Thanks to THAT'S ENTERTAINMENT, Bob Meets the Mortons can be viewed at this link.
Posted by Hal at 8:24 PM