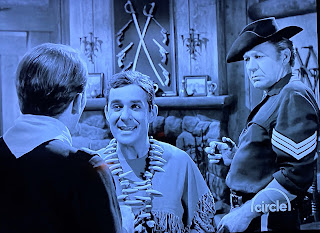 A communique arrives to notify Captain Parmenter that as a result of the superb troops under his command, F Troop has been chosen to test a top secret new military weapon.  Uh, on second thought, perhaps it was chosen due to the Fort's remote location?  That's part of the upside, true, but the Secretary of War also notes the limited downside in the eyes of the Army.  Failure of the device (a bullet proof vest, though they are practicing on it with arrows in D.C.) could result in the loss of some members of F Troop! 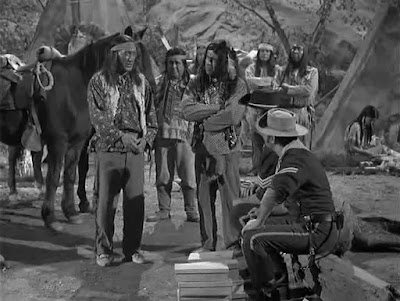 Arriving on the same stagecoach as the highly confidential package: 'new schoolmarm' Lorelei Duval, who is in turn being shadowed by secret agent B. Wise.  Wise fears that Duval could be involved in counterespionage, and she certainly shows a great deal of interest in Parmenter's plans.  If she's  disguised as a teacher, her camouflage pales in comparison to B's, a self-described man of thousand faces.  If B Wise's name doesn't bring a certain operative on a rival network to mind, he also showcases  weapons hidden in his shoes and suspenders.  But should the Troopers be wary of Lorelei's feminine wiles, or simply beware of B Wise? 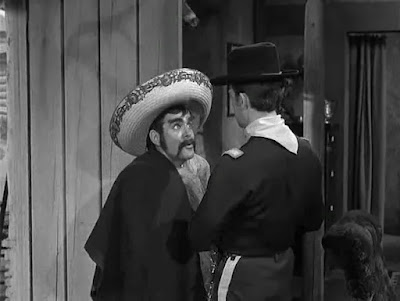 WISE: I'm a man of a thousand faces!

PARMENTER: I find that hard to believe.

WISE: Would you believe eight hundred and fifty?

Fellow freshman GET SMART comes in for a ribbing courtesy of Stan Dreben and Howard Merrill, who penned Stakeout on Blue Mist Mountain for that series in addition to their busy slate (eight segments) that season for F TROOP.   B. Wise's array of disguises might recall Artemus Gordon more than Maxwell Smart, but it's all SMART from there: Don Adams' clipped speech, 19th century equivalents of 99's gadgets, and even verbatim catchphrases are lifted.  Fortunately, STEVE ALLEN vet Pat Harrington, Jr. is up to the task, deadpanning his way to one smile after another.  For my money, he's a better infiltrator than The Phantom Major, but your mileage may vary. 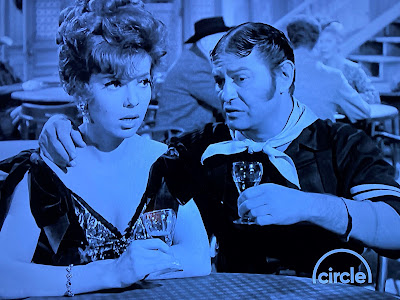 Harrington is on target, but he has unfair competition.  Abbe Lane might well be the series' most enticing female guest star--high praise when one considers that the competition includes Leticia Roman, Laurie Sibbald, Julie Newmar and Lee Meriwether.  Ms. Duval's schoolmarm ruse might pale in comparison to Wise's abundance of aliases, but sometimes less is more: she avoids pratfalls while deftly lifting the plans from the Captain.  Granted, that's like taking candy from the proverbial baby, but so what?  You either get the job done or you don't, and she did! 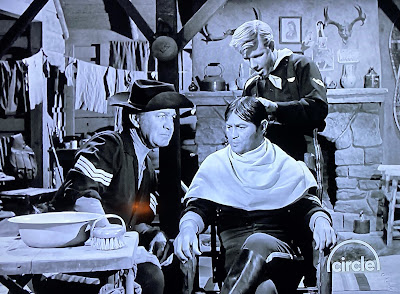 After taking over as company barber the previous week in The New I.G., Dobbs continues with his new duties by getting Agarn ready for his date with Lorelei.  All the bay rum in the fort can't help Randolph score, though merely getting tossed aside for the more connected Captain is a step up from the rejections Betty Lou (Our Hero, What's His Name?) and Hermoine Gooderly (Wrongo Starr and The Lady in Black) laid on him.  While it doesn't sound good, don't worry about Jane--Ms. Duval is just doing her job.  She's all business, which means the Sarge shouldn't fret his own strikeout with her either.  And hey, Ms. Duval manages to get Wilton away from cherry phosphates at the saloon, so take note Jane: maybe getting him tipsy would loosen him up..... 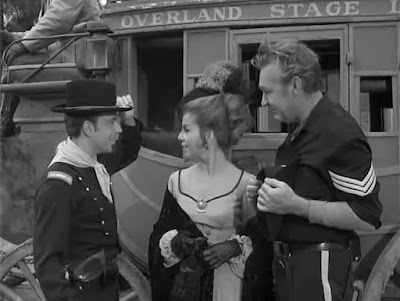 The writers land most of their verbal volleys, but director Rondeau is uncharacteristically sloppy during a poorly thought out tag.  Yes, it's entirely predictable that none of the Troopers can hit Agarn from ten feet.  (They'd miss him again under more perilous circumstances in The Day They Shot Agarn.)  But testing the vest inside the men's quarters?  And somehow knocking the tower down with bullets without shattering the windows or putting holes in the walls?  Arguably the show's biggest groaner of a tag, and could have been easily solved by merely moving the testing of the vest outside.  There's no reason to fire those rifles inside--it'd be dangerous even with decent marksmanship with the standards of bullet resistance of the time! 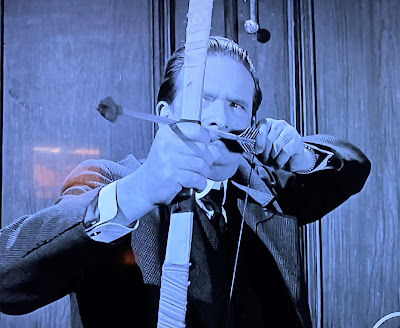 The saloon looks to be having an average night during Agarn's "date" with Lorelei, and O'Rourke successfully sells 8 pairs of Hong Kong-made moccasins to the Chief and Crazy Cat.  Never fear, the Sarge keeps production of the whiskey and souvenirs close to home. 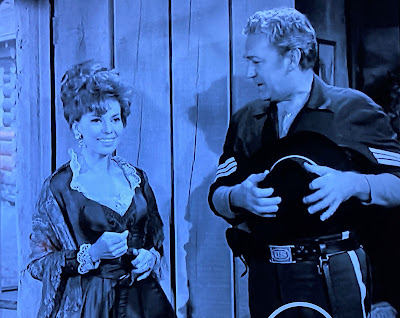 Zero, though B. Wise appears to be headed for a firing squad at the end of this one.  Ruined his whole day. 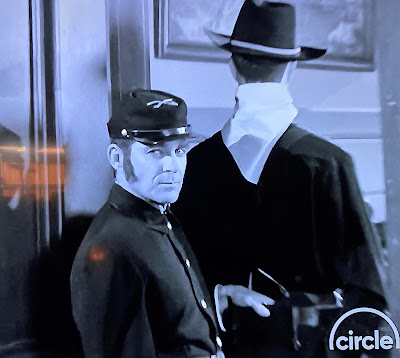 "Chinese moccasin feel good when you put them on, but one hour later, feet hurt again!"  Well, Hong Kong was ceded to the British at the time under the Convention of Peking, but maybe Wild Eagle wasn't up to date on his empire news.

The reserved female spy turns out to be Washington D.C.'s top agent, and she is more effective than her flashier male counterpart.  Yeah, just like 99 in comparison to Max, but a full century earlier!  Once again, F TROOP is far more progressive than its detractors would ever admit. 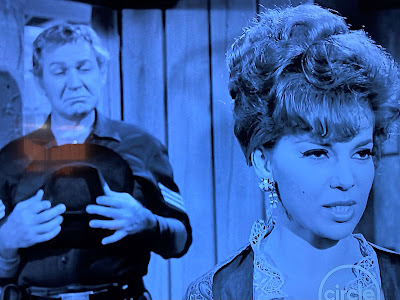 Amusing spoof is the show's most elaborate of a competitor, and well written with a typically eclectic cast.  Too bad Wise's capture certainly made it impossible for Harrington to reprise the role, since the future Dwayne Schneider is in fine form here.  Abbe Lane doesn't get to sing, but you can't have everything.  The worst execution of a tag in the show's entire run isn't enough to spoil everything, but it should have either been restaged or cut altogether.  Par for the first season course, which is more than good enough.  (*** out of four)

I think this was around the time Pat Harrington, Jr. was also doing the Inspector for DePatie-Freleng. Not too shabby as a Smart knock-off, too.

hobbyfan: Nice catch. Larry Storch did some voices for The Inspector also.

John: Thanks for reading and commenting. Sorry about the glacial pace of postings these days, real life has been intruding on my writing (long story). Keel will have his day here eventually. :) Incidentally, still reading WWW thrice weekly, your posts lately are kicking ass as always!

I will, of course, patiently wait!!!