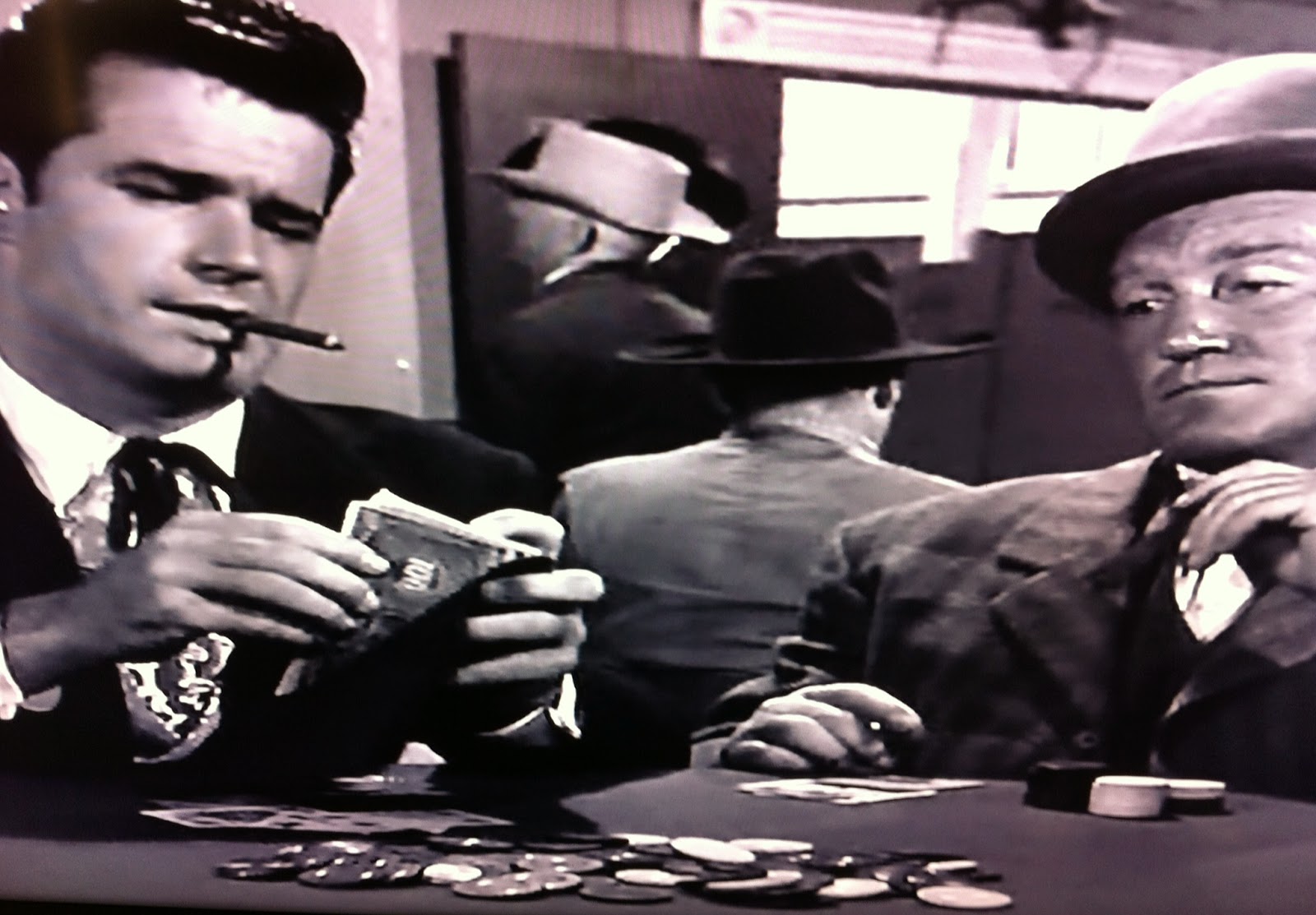 Stopwatch in hand, Bret Maverick travels to Hollow Rock, Wyoming for "the best quarter horse race in the country", held annually on the fourth of July.  Indulging in the local stud poker game, Bret discovers it to be rigged, and foils the mechanic dealer (attempting to deal from "down under").  What Bret doesn't know: the man behind the rigging is crooked Sheriff Carson, who takes revenge by beating and robbing Maverick in his hotel room.  When Bret rightly suspects Carson's deputy as one of the culprits, Maverick ends up in jail, charged with assaulting a peace officer. 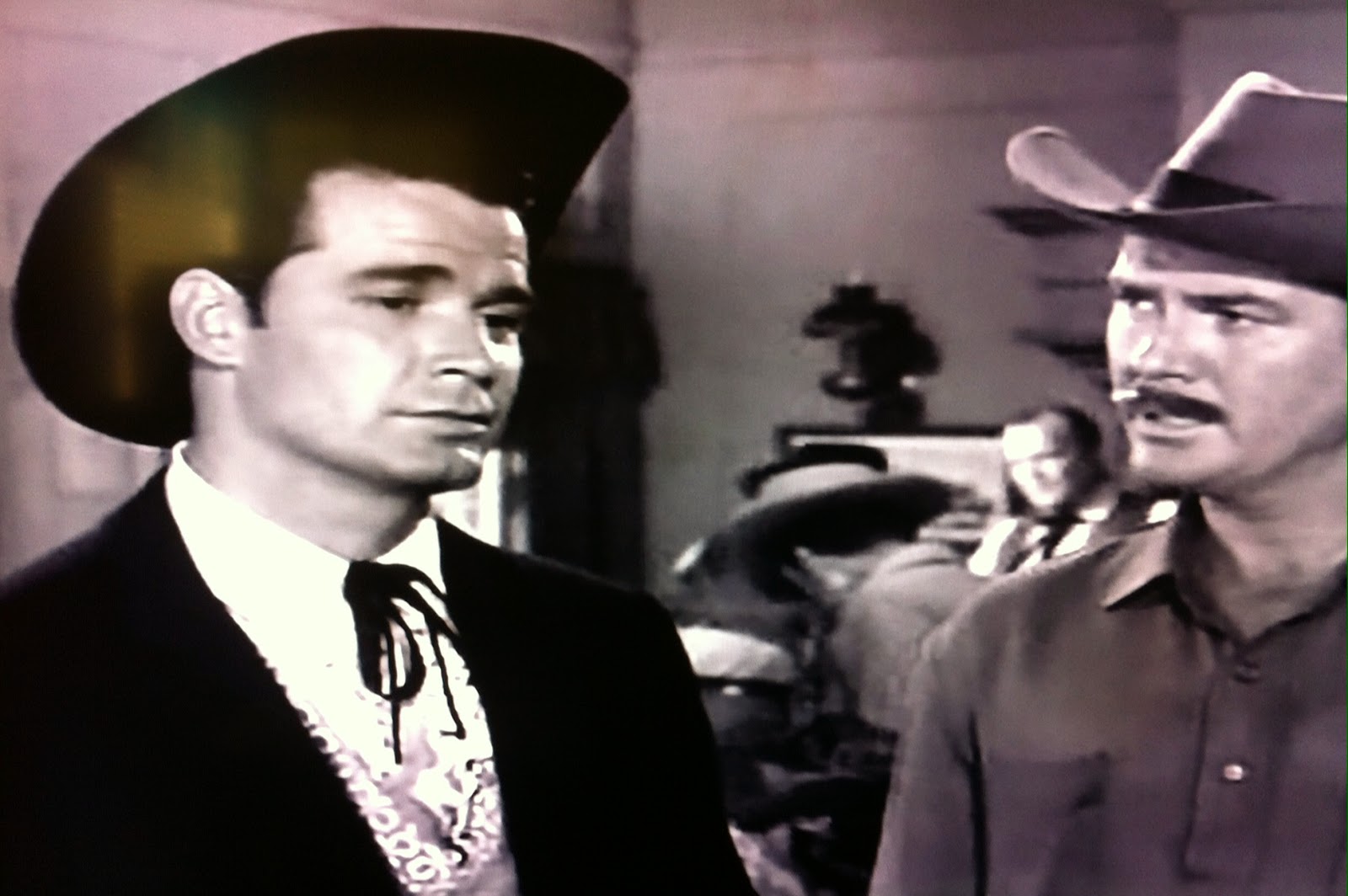 For a city slicker, Maverick has some friends locally.  Among them: rich and influential Colonel Taylor, whose horse Silver King (a reference to the very first MAVERICK episode) is the reigning champion.  How influential?  Enough to spring Bret from the clink.  Since the Sheriff has his sights on Taylor's daughter Nora (and the riches that come with marrying her) he's not willing to get on the Colonel's bad side.  Bret has another local ally in Blake, a fellow poker player and horse enthusiast who feels his mare Molly can take the Independence Day prize from Taylor's prized stallion.  Seeing a chance to pay the corrupt Sheriff back and perhaps do a few good deeds in the process, Bret decides to provide surreptitious assistance to Blake on and off the track.

"Fighting somebody is a lot easier when you can feel noble about it".  That quote is from Bret, not Pappy, and it's the theme of this often overlooked entry from MAVERICK's landmark second season.  As usual. Bret is three steps ahead of everyone else, but notably, his intended kindness goes awry at first.  Blake overestimates the hand Bret has dealt him and refuses the Colonel's offer to purchase Molly.  As it turns out, the contingency plan works even better for Bret than catching Carson in the act of attempted sabotage.  With the race still on, Maverick is able to use the ruse to obtain the evidence needed to snare his robbers. 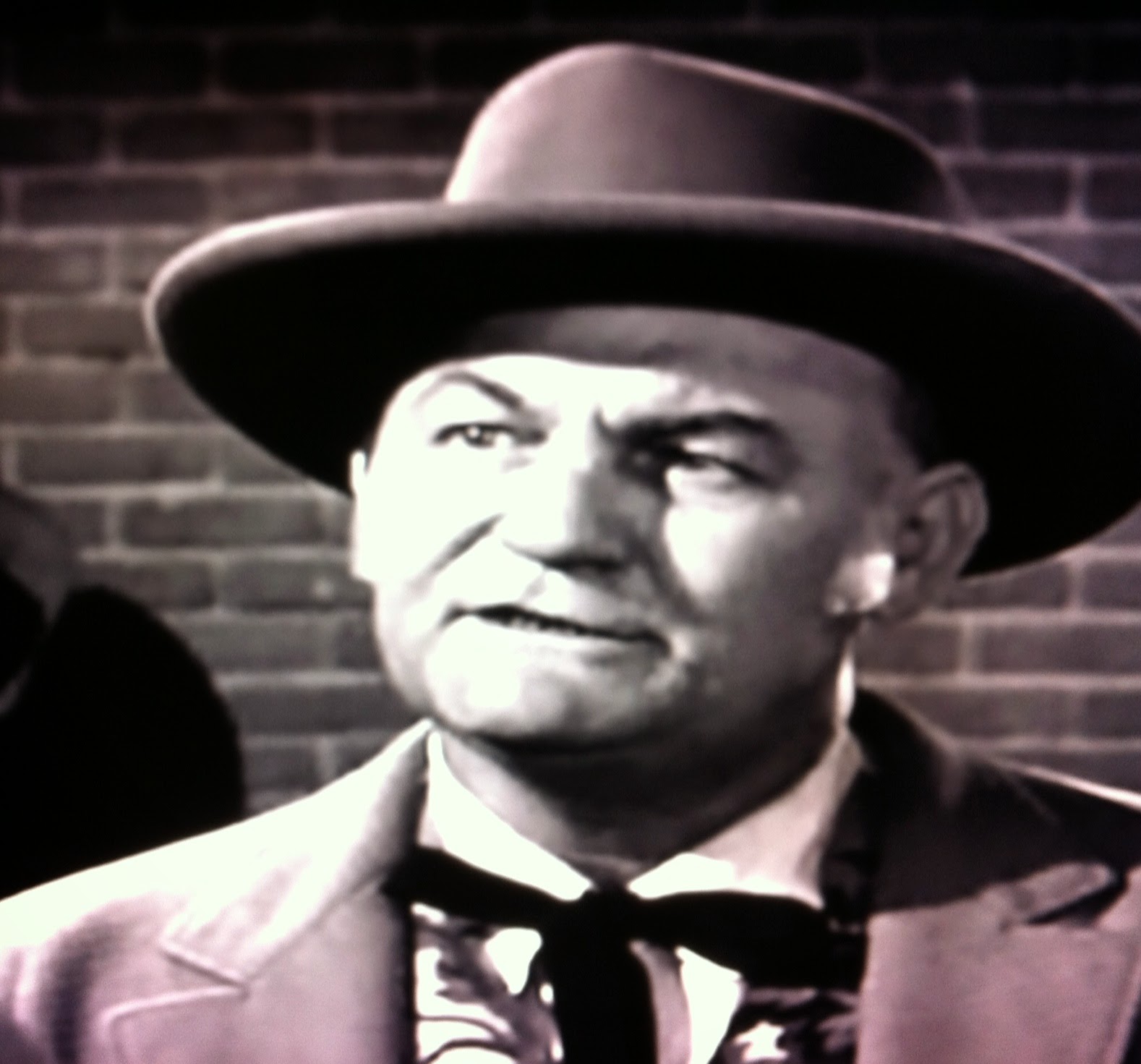 Wonderfully gruff character actor Emile Meyer, who was so memorable as Bret's key adversary on the jury in Rope of Cards, makes a return to the series as friend instead of foe.  As was the case in Duel at Sundown, Bret's visiting an old friend and caught in the middle of a budding courtship.  Only this time the Colonel is sold on his daughter's intended while Bret knows better.  Colonel Taylor is the main surface mark for Bret's well intentioned dishonesty, but proves to be a good sport about it in the end.  Maybe a tad more understanding than you might think is plausible at first, but then, he should be relieved that Bret's interference kept the good Sheriff out of his family and brought Blake's honorable intentions to the forefront.  As a plus, the Colonel's pride in Silver King remains justified at the episode's conclusion. 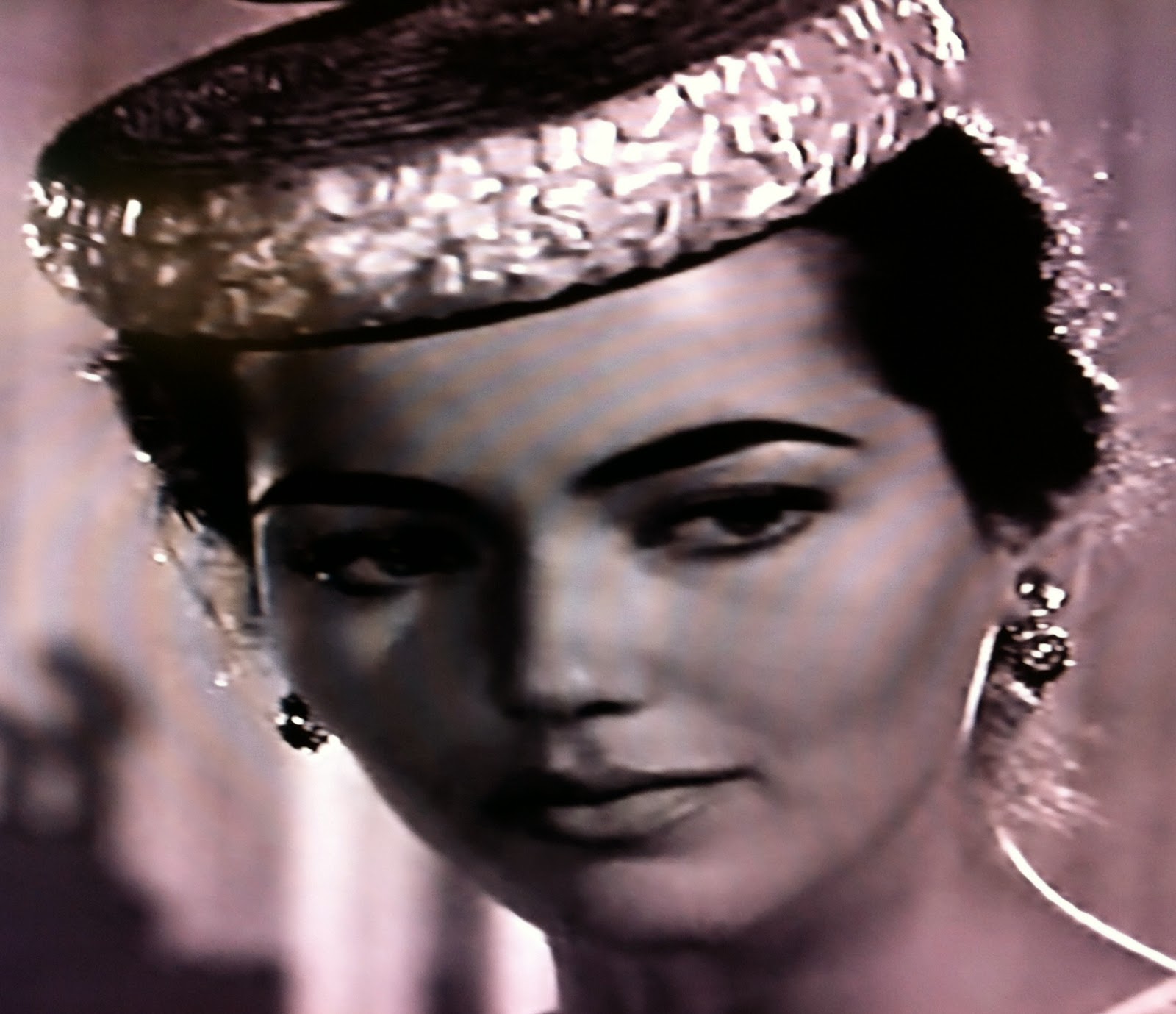 Stunning model Saundra Edwards began her star-crossed acting career after being named Playboy's Playmate of the Month in March 1957 and appearing as a Modern Man covergirl.   She had a small role in Burial Ground of the Gods shortly after signing her contract with Warners in February 1958; this was her second and final MAVERICK.  For some reason, she was dubbed: that's the voice of Mrs. Roy Huggins herself, Adele Mara, reciting Edwards' lines throughout this episode.  Edwards is stunningly beautiful here; sadly, her career would end with the shooting death of her estranged abusive husband, actor Tom Gilson (The Cactus Switch) in 1962.  She was only 24 at the time, and a coroner's jury ruled it a justifiable homicide, but she has yet to work in film or TV again.

Look closely for long-time serial Western star Bob Steele in an adjacent jail cell, and yes, that's SHE DEMONS hero Tod Griffin as Hollow Rock's unlawful lawman.  As Bret puts it: "How do you turn a crook over to the sheriff when the sheriff's the crook?"

Howard Browne was best known for his writing in the science fiction genre, but contributed to ten MAVERICK episodes in all, including the aforementioned Duel at Sundown (co-starring a young Clint Eastwood as Bret's adversary).  He does a nice job keeping the series' trademark humor coming while weaving this multi-layered plot, with each conflict reaching a satisfying conclusion.  Not to say that it is perfect.  For example, you'd think that a peace officer would know better than to make such a careless mistake in the denouement.  To be fair, though, Bret did note the sheriff would be "in a hurry" and we see his pre-race panic for ourselves--it's almost as explainable as the Colonel's good natured response when one ponders it.  Haste makes waste, right?

After cracking the crooked stud game, Bret wins four hundred that we see with Aces against Queens before the first session breaks.  He wins $3600 in his followup, before he is robbed of all of it.  As an added bonus, he does quite well betting on the quarterhorse race.

Referencing the dishonorable sheriff of Hollow Rock, Bret makes an exception to Pappy's advice: "If you haven't anything nice to say about a man, change the subject."  This is the second time in the episode where Bret goes against Pappy's words.  Earlier, he participates in the $100 Limit Stud game despite this proverb: "Never play in a rigged game unless you rig it yourself."

Intricately plotted, highly entertaining episode that was somehow left out of Columbia House's VHS series, one of only two Bret episodes not to make the cut (the first season's Black Fire, also written by Browne, was the other).  Once you've seen Holiday at Hollow Rock, the oversight is noticeable.  It's easy to root for Bret when he's battling a corrupt lawman (and his self-interest coincides with the common good).  Meyer is always a delight, and Edwards is extraordinarily easy on the eyes.  Holiday at Hollow Rock isn't nearly as well known as Browne's Duel at Sundown but the script is arguably just as solid.  Perhaps everything is tied up a bit too neatly, but this isn't enough of a defect to spoil perhaps the most underrated Bret solo outing.  (***1/2 out of four)

Great writeup! I'll have to track down this episode.

Thanks, Jack, and thanks for reading! I'm finding a lot of hidden treasures during these re-watches.

Can't find any Maverick episodes with Sandra Edwards on youtube.

Looking for vintage Western shows with Mara Corday--any links for me? Thank you!

Hi, Aitch, thanks for reading! In regards to Ms. Edwards, WB has made MAVERICK episodes available on YouTube, but for a fee (they did the same with individual episodes of F Troop). I think it's $2 per episode. Unfortunately as mentioned it is not Edwards' voice in this one, which I found a little distracting since I know Mara's voice so well.

I know Ms. Corday guest starred on KIT CARSON several times, but I'm not sure about the public domain status of that series. Corday's 1957 western THE QUIET GUN is easy to find on YouTube, or was last time I looked.

Thank You Hal Horn! I will check this out!