Twenty years ago today, on October 25, 1986, the entire nation mourned.  Forrest Tucker, the greatest actor who ever lived, passed away from cancer at the young age of 67.


Tuck's full obituary from the Los Angeles Times can be viewed here. Of interest: Milton Berle is quoted, but the article makes no mention of their legendary "contest" to determine, once and for all, Hollywood's most, uh, gifted performer.

I've previously reviewed some of Tuck's work here: a two-parter on F Troop: The Complete First Season on DVD, as well as two of his hidden treasures still unavailable on DVD (why the Hell not???): the quintessential 1980's action/cheese classic THUNDER RUN and one of his finest character roles, co-starring with fellow Western legends Lee Van Cleef and Warren Oates in the ultraviolent, yet sadly neglected BARQUERO (pictured at the top, with John Davis Chandler).

There's more hidden Tuck Classics to come here at The Horn Section, but I should take time to recommend some of his films that you can find on DVD: SANDS OF IWO JIMA (1949) and CHISUM (1970), which both feature Tuck going toe-to-toe with John Wayne;

THE ABOMINABLE SNOWMAN (1957) in which he and Peter Cushing lead an expedition searching for the legendary title creature; 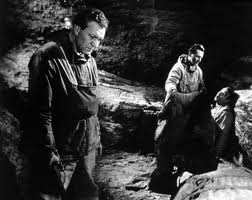 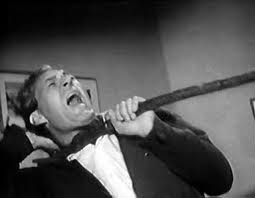 AUNTIE MAME (1958), as Beauregard Burnside, the role that finally made everyone notice his comedic talents; and the fun, melodramatic drive-in sleeper THE McCULLOCHS (1975), Max Baer Jr.'s follow-up to MACON COUNTY LINE in which Tuck shows his dramatic chops as the two-fisted patriarch of a wealthy Texas family. This film is also noted for a ten minute brawl between Tuck and Baer that inspires dozens of wagers, much collateral damage, and a little old lady urging Tuck to "kick him in the balls, Mac". 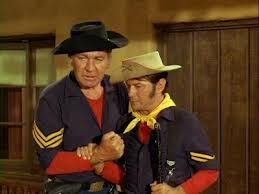 Always underrated during his career, Forrest Tucker wasn't a "one hit wonder" who picked up an Oscar that had people scratching their heads (a la Broderick Crawford) nor did he receive one of those late-in-life Oscar nominations that was largely a lifetime achievement award (a la Jack Palance, James Coburn). He was, however, one of the original recipients of the Golden Boot award in 1983 for his contributions to the western genre.

He may not have won an Oscar, an Emmy or a Tony, but Forrest Tucker simply gave one excellent performance after another for 46 years.  Whether he was on stage (did you know he played Professor Harold Hill in THE MUSIC MAN an astounding 2,038 times?), on television, or especially on the big screen in one of his more than a hundred feature films, Tuck could be counted on to deliver the goods.

You neglected his sublime, yet assertive performance in COLUMBO: BLUEPRINT FOR MURDER

(I've also added you to my blogroll, BTW)

Thanks for the add, Gordon, and welcome!

Also available, on COLUMBO: THE COMPLETE FIRST SEASON at that! That's an interesting episode also for the great behind the scenes stories...it was Falk's debut as director (also, I believe his only directing credit for the 1970's run) thanks to his power play with the studio. Levinson and Link had some great info on this in their book STAY TUNED.

It's a shame Tucker was never a COLUMBO murderer, but you're right, he had that Texas millionaire thing down perfectly.

Anonymous said...
This comment has been removed by a blog administrator.
10:07 AM

Thanks for your post on this fine, underrated actor. I liked Tucker not only in 'F Troop' (always very funny!) but in his Westerns, such as 'Rage at Dawn' with the great Randolph Scott.

I just saw Mr. Tucker this week on a MeTV rerun of Bonanza from its penultimate 13th season. His episode is called "Warbonnet", and he played a bar owner who'd made up stories about several things, including how he got an authentic Indian warbonnet in his bar. He's now in a predicament, as the owner of that warbonnet, now an old man with a nearly-grown grandson, has arrived in his town, having saved Little Joe's life. The old man wants his warbonnet back, and he's willing to lose his life for the honor behind it. Is the bar owner willing to do the same? Have you seen this story & reviewed it yet?

Hi, Jon! I did a mini-review of Warbonnet on the Centennial post last year:

Solid episode. I only wish he had appeared on BONANZA more often, and I really wish he would have appeared on Dortort's sequel series, THE HIGH CHAPARRAL.

Sequel series; meant to say next series, obviously. At least CHAPARRAL star Linda Cristal appeared with him in Warbonnet.