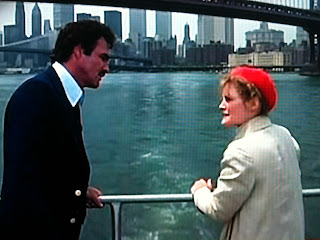 
Reynolds is a single, successful Madison Square Garden manager who realizes at 44 that he wants a child to carry on his name.  He also wishes to remain foot loose and fancy free, so he opts to hire a surrogate mother "with no strings attached".  Friends Fell and Dooley help him interview prospective "applicants", with Burt eventually deciding that waitress D'Angelo is his best choice.  Since D'Angelo is saving to move abroad and study music, she agrees--for $50,000 towards her goal.  Burt continues to woo the likes of Ashley and Hutton while his bun is in the oven, but it soon becomes obvious that D'Angelo might be right for him in more ways than one.

The last of Paramount's "sensitive Burt" trifecta, PATERNITY was the least successful of the three with critics.  As noted in the ROUGH CUT review, Reynolds alternated good ol' boy action films and chick flicks annually during the final years of his heyday. The former resulted in financial successes but critical brickbats while the latter succeeded on both fronts with STARTING OVER (1979) but struck out afterward.  Despite a good supporting cast, PATERNITY is pretty tepid from the get-go.  The cloying, Razzie Award winning song "Baby Talk" opens the movie--a harbringer of things to come. 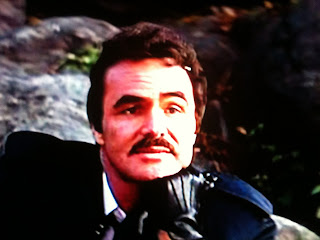 On projects directed towards his female audience Reynolds almost exclusively worked with proven (and often Oscar-nominated) directors: Don Siegel (ROUGH CUT), Blake Edwards (THE MAN WHO LOVED WOMEN), Alan J. Pakula (STARTING OVER) and Norman Jewison (BEST FRIENDS).  By contrast, comedian David Steinberg was making his directorial debut with PATERNITY.   Steinberg fails to build momentum in the hour and a half that precedes the curt finale.  After one more failed feature (GOING BERSERK) he would find a niche on TV, directing classic episodes of SEINFELD, CURB YOUR ENTHUSIASM and Burt's own EVENING SHADE among many others.  Screenwriter Charlie Peters (BLAME IT ON RIO) was also doing his first feature, and he saddles Steinberg with a script that is way too light on humor and presents Burt's character as unlikably narcissistic much of the time.

Reynolds had done the "selfish man seeing the error of his ways" bit a year earlier in a terrible fit for that subject matter, SMOKEY AND THE BANDIT II.  While the sequel to Burt's biggest hit had a built-in audience that ensured brisk ticket sales, many moviegoers felt that SMOKEY II lost the breezy fun of the first film with the focus shifting to the Bandit's (rather sudden) egomania and insecurity.  The attempt to present an often unsympathetic protagonist might have worked here with assured direction and a strong script, but PATERNITY lacked both.


Burt Reynolds experimented far more during his career peak than he was given credit for and the results were frequently interesting, but PATERNITY is a real snooze.  By this time only his action comedies were making the top 10 grossers at year's end.  He would return to critics' good graces with SHARKY'S MACHINE a few months later, but the film's mildly disappointing box office helped send him back to good ol' boy land.  The resulting STROKER ACE was one trip too many to that well.

PATERNITY is probably the most forgettable film of Reynolds' peak years, and the target audience is more likely to root for his comeuppance than for him and D'Angelo to get together.

Even when not wholly successful, Reynolds' chick flicks usually had points of interest.  Burt gave terrific performances in THE MAN WHO LOVED WOMEN and ROUGH CUT and both STARTING OVER and BEST FRIENDS are well crafted, funny films (the latter has some hilarious moments).  But I can't make much of a case for PATERNITY, which is strictly for the actor's completists.
Posted by Hal at 6:46 PM

I have a real soft spot for the Paramount Studio comedies of this era. I really enjoy this one. And great use of locations!