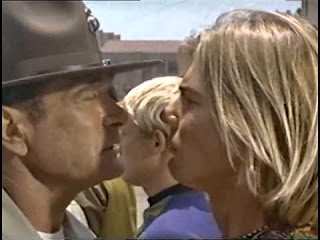 Quintessential flower child Jan-Michael Vincent is drafted into the Marines under D.I. Darren McGavin. Honed by his daily practice of meditation and yoga, Vincent turns out to have ideal mental focus and physical conditioning for boot camp itself. He also has the highest score on the aptitude test despite lacking a high school diploma. But being a superior practice player won't be enough. It is McGavin's job to turn the hippie into a killing machine at game time, something utterly rejected by Vincent with his pacifist beliefs.  McGavin also must deal with Vincent's growing influence within his platoon due to exemplary drill performances and Holliman's belief that McGavin is losing control of his men.

TRIBES isn't specifically about the Vietnam War, but the then-ongoing conflict looms large throughout, as it is clear that's the post-graduation destination. Coming from an era in which long-held beliefs and authority figures were being questioned throughout American society, TRIBES succeeds in depicting the dehumanization of boot camp and also effectively presenting both the pacifist and militaristic sides of its conflict. This despite the limitations placed on it in budget and content (no foul language allowed!) as a network television project.

The film was successful enough in its original airing to earn an Emmy for the teleplay by Marvin Schwartz and Tracy Keenan Wynn and overseas theatrical release under the alternate title THE SOLDIER WHO DECLARED PEACE. You'll see clear influences on better known films to follow, such as FULL METAL JACKET (i.e. the opening barber sequence, in slo-mo, and a latrine scene that anticipates Private Pyle's tragic end) and HEARTBREAK RIDGE (in which a career gunnery sergeant also sees how ill-equipped he is to deal with a changing world). But TRIBES is much subtler than either in making its points. At 93 minutes, it's also leaner.

McGavin and Vincent both give solid performances and Emmy nominated Joseph Sargent keeps the sharply edited film visually interesting throughout. Sargent would go on to direct THE TAKING OF PELHAM ONE, TWO, THREE, MacARTHUR, and two of the very best films ever produced for HBO, MISS EVERS' BOYS and SOMETHING THE LORD MADE. 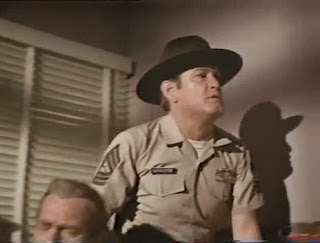 All but forgotten today and long overlooked, TRIBES is yet another example of why the first half of the 1970's was truly the Golden Age of the made for TV movie.

Given the short description of "hippie joins the marines" and the aforementioned limitations within the boundaries of early 1970's network TV standards, the film can't help but come across like something of a period piece at first glance.

As a general rule, early 1970's made for TV movies don't get DVD releases unless they have a marketing hook (i.e. "Spielberg's first film" or "James Caan shortly before THE GODFATHER").

Among the very best made for TV movies of its era, which is high praise considering that era includes DUEL, MY SWEET CHARLIE, BRIAN'S SONG, THE EXECUTION OF PRIVATE SLOVIK and WELCOME HOME JOHNNY BRISTOL (also dealing with Vietnam) among many others.

Regarding that "marketing hook"; while Jan Michael-Vincent's career might have gone completely off the rails, shouldn't an early effort from Joseph Sargent mean something?  The first screenplay from Tracy Keenan Wynn (THE LONGEST YARD and THE AUTOBIOGRAPHY OF MISS JANE PITTMAN), TRIBES occasionally airs on Fox Movie Channel.

Jan-Michael Vincent was 2 years removed from having worked on the "Danger Island" serial, a part of "Banana Splits". I am not sure if this was his first role under the more familiar monicker (he was billed simply as "Michael Vincent" on "Danger Island"), but had anyone at Fox had the necessary wherewithal to release this while Vincent starred on "Airwolf" in the late 80's, then there's your marketing hook.

This one had a big impact on me as a boy. There's something unrelated to the story but ingrained in the very film itself that makes my heart hurt watching this, hurt for the years gone by, the deaths of Darren McGavin and John Gruber (who didn't even reach 40) and the waste that was Jan-Michael Vincent's life. And the pain of feeling the gap between those days long ago and now. I'm almost afraid to watch this again.