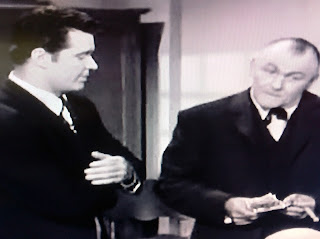 
Bill Gregg is arrested for killing John Sloan, having been caught running out of Sloan's house with the dead man's cattle profits found on his person.  Bret Maverick's poker game is interrupted by the Sheriff, since Gregg has identified Bret as one man who can back up his seemingly impossible alibi.  Unfortunately, Bret can't, and Gregg is put on trial for Sloan's murder with Bret and the rest of the town's poker players among those selected for the jury. 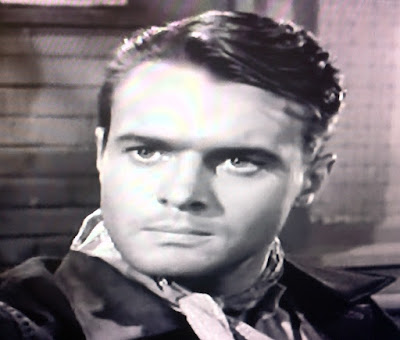 With a politically motivated prosecutor presenting the evidence, it's clear that Gregg faces long odds.  In addition to the facts above: Sloan's fence had been cut, Gregg had recently purchased wire cutters, and a half-dozen witnesses in the saloon saw a confrontation between the two shortly before Sloan's shooting.  The tally is 11 to 1 in favor of a guilty verdict on the jury's initial vote, with Maverick being the lone holdout.  Why?  Bret knows things aren't always what they seem. 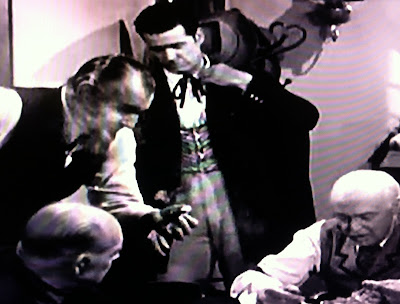 Though it is another of TV's seemingly endless variations on the Rose classic, it's way too simplistic to say that Rope of Cards is 12 ANGRY MEN, MAVERICK style.  We get a puzzling mystery that is solved in flashback by Gregg's testimony, yet seems so far-fetched that (as Bret surmises) Billy himself doesn't believe it.  Only Bret Maverick does, with the series once again making one of its key recurring points: the deductive reasoning required for success at poker translates well to life's other areas. 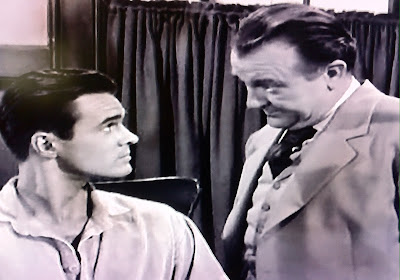 Rope of Cards also features a marvelous battle of wits between ambitious Blaine and defense attorney Hallack.  Sending a "murderous thief" to the gallows will only enhance Blaine's planned run for Governor under the banner of law and order.  Hallack, who finds his colleague ethically lacking, takes the case to stop him from using Gregg as a stepping stone.   The ensuing courtroom battle is even better than the one that follows in the jury room between Bret and Pike; in fact, for my money it's as good as any Perry Mason/Hamilton Burger confrontation. 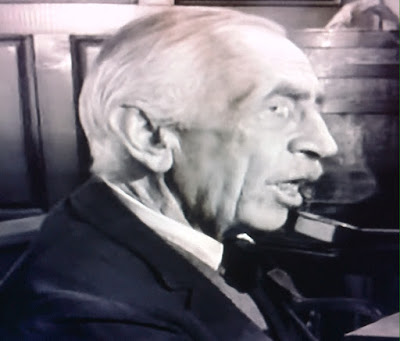 The role of Hallack gives flinty Wright (I'd imagine he and Charles Lane were up for a lot of the same parts) a chance to play a good guy for a change, and the old pro clearly appears to relish the opportunity.  Rope of Cards was the first of six MAVERICK appearances for Wright, who had his penultimate TV role in the final season's The Troubled Heir (he died of cancer in June 1962). 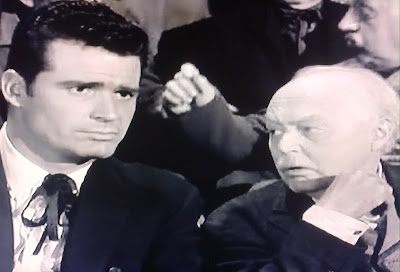 Of course, the final third is dedicated to jury room deliberations, with Bret as the lone holdout (a.k.a. "Juror 8") and Pike as the leading antagonist, ostensibly "Juror 3".  Pike is the toughest nut to crack, and--as we heard while the card game was still going--has definitely pre-judged Gregg's guilt.  But Pike isn't the sadistic bigot that Juror 3 was revealed to be in Rose's original, and in fact is given plenty of reason to dig in his heels--by Bret. 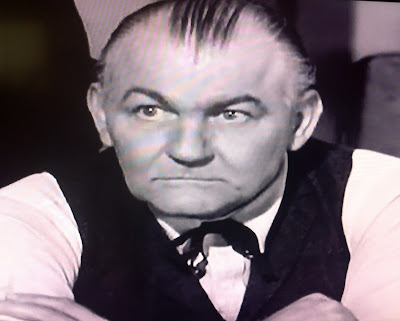 Before discussing a single shred of testimony, Maverick bets Pike $500 that Gregg will be acquitted, putting the bet's outcome entirely in Pike's hands--Pike must vote "not guilty" for Bret to win his money.  While it is typical MAVERICK subversion to feature such a perverse bet (a man's life literally hangs on the outcome!), in making it, Bret ensures that Pike will remain entrenched in his position before he gives evidence even the slightest chance of changing the man's mind.  A minor flaw, no?  Still one more than compensated for by Bret's ensuing presentation of logical thinking.  He's a worthy rival to Fonda's dramatic Juror, and rather than giving us the high minded homilies that other westerns would, Maverick climaxes his presentation with a card trick. 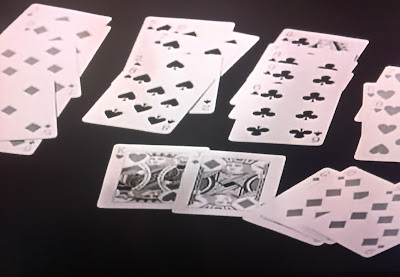 Which is what everyone remembers about Rope of Cards: the introduction of Maverick Solitaire.  Watch closely: director Baer presents the entire sequence in one continuous shot, starting with the shuffle and ending with the highly unlikely (or is it?) five pat hands.  Pike, being a player Bret accurately pegs as "only betting on sure things", falls hook, line and sinker for the presentation, but this second "safe bet" turns out to be anything but.  Rather than ending up a shattered man like his 12 ANGRY MEN counterpart, Pike proves in the conclusion to be a "pretty good man" (as Bret suspects) in addition to a pretty good player.  In modern poker parlance Pike is "book smart" but not "street smart", and a professional player had better be both--like Bret.  Maverick bluffs Pike off of a hand holding King high during the poker game, then later bluffs him into a call by making Pike think he has a near-certain winner in the denouement (when in fact, Pike is almost drawing dead)--playing the player both times.  And using his poker skills to set an innocent man (another sharp read by Bret, the pro) free. 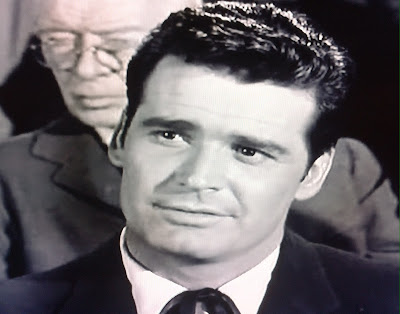 Bret was losing to Mr. Sloan, but once Sloan's untimely demise removed him from the game, Bret seemed to be doing better--though he still appeared to be stuck when the Sheriff called him away at Gregg's request.  We did see Bret pull off a nice bluff with a busted open ended straight draw on the game's final hand.  After Bret took down the respectable pot, the game was interrupted for good to choose a jury pool.  Bret did make at least $1,000 back in side bets with the hapless Pike, meaning that Maverick Solitaire was the more profitable game (by far) this time.

Future LAWMAN director Robert Sparr was deservedly nominated for an Emmy for his editing of Rope of Cards.  Curiously, while he also directed episodes of 77 SUNSET STRIP, HAWAIIAN EYE, CHEYENNE and BRONCO among other Warner Brothers series, he never helmed a MAVERICK. Sparr (who was killed in a 1969 plane crash) scored both of his Emmy nominations for editing MAVERICK episodes; his second was for The Quick and The Dead.

None, which is mildly disappointing since you'd think Pappy would have something to say about our justice system.  Just one of several instances in which we should expect the unexpected here. 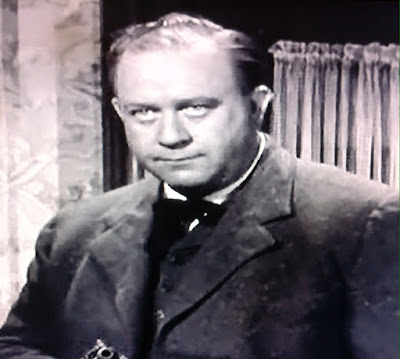 While I doubt that Roy Huggins was literally correct in claiming that "every store in America" was sold out of playing cards within days of its initial airing, there's no denying that Rope of Cards was very effective in selling the country on tuning in to ABC's freshman series at 7:30 P.M. on Sunday nights.  Everyone remembers the introduction of Maverick Solitaire, but Rope of Cards is also a solid mystery with outstanding courtroom theater.  Over a half century later, MAVERICK remains the most pro-poker series ever to hit prime time, portraying the skills needed to succeed at the game in a consistently positive light.  If this installment isn't quite Exhibit A in that regard, it isn't too far down the alphabet.  (***1/2 out of four)


MAVERICK currently airs Monday through Friday at 1 PM Central/2 PM Eastern without commercial interruption on Encore Westerns, and every Sunday morning at 10 AM Central/11 AM Eastern on COZI TV.
Posted by Hal at 4:39 AM